Sister of Charity of New York Immaculata Burke has been a near legend in the Diocese of Spokane, especially for those who follow the work of the diocese's mission in Guatemala. She died March 8 at the age of 94 in Guatemala. The following is reprinted with permission from the March 20 issue of the Inland Register, the Spokane Diocese's newspaper:

Sister Immaculata moves on from Guatemala Mission to her Eternal Reward

by Jerry Monks, for the Inland Register

“Heaven has gained another saint, right up there with Mother Teresa of Calcutta.”
– Father Mike Savelesky

Large crowds of native people, two funeral Masses, continuous rosaries, and a two-mile procession to the Santa Lucia cemetery give strong testimony to the words of Father Mike Savelesky, the Spokane Diocese’s Moderator of the Curia, that Guatemala has produced another saint. Sister Immaculata Burke, a Sister of Charity of New York (SCNY), provided the Mayan Indians of the Spokane mission area with medical care for 43 years. Sister Immaculata passed on to her heavenly reward on Saturday, March 8.

Sister Immaculata took on the assignment of bringing health care to the Quiché-speaking natives of the Spokane mission in 1971, after earlier experience in England, India, and The Bahamas. As a devoted Sister of Charity of New York, she willingly accepted the environment of storms, major earthquakes, and violent hurricanes that dumped torrential rains on the mountainous area that came to be her home. Her focus, instead, was on what she frequently termed “the people ... the poor people.” And those “poor people” soon grew to love the “Madre” like no other angel they had ever known.

Getting around in a roadless, mountainous area in the early days to visit people living at an elevation of 7,000 to 11,000 feet was not an easy task. It was further complicated by a measles epidemic that swept through the region, killing over 50 children in one of the villages shortly after she arrived. One of the first challenges Sister faced was convincing skeptical natives of the benefits of vaccination. She did so, and as a result many lives have since been saved.

Over the intervening decades, the former Bridget Burke of Ireland continued to overcome many challenges and post many achievements. As a responsive nurse, she soon had classes going to train health promoters in hygiene, nutrition, and midwifery so they could extend care into the primitive dirt-floored huts in remote areas. She established pre-natal and baby clinics and introduced other vaccination and dental programs. Having delivered more infants than can be counted, it is not surprising that some of those babies are now adult women proudly bearing the name “Immaculata.”

As Sister Immaculata became aware of the medical needs in the Spokane Mission, she moved quickly and effectively to meet them. The Highlands desperately needed their own physician. She helped organize support for the professional education of a very bright and dedicated, Quiché-speaking native, Dr. José Miguel, who has now taken charge of the medical programs. She also expanded the number of clinics and established sources for equipment and medicines.

The violence of the Guatemalan Civil war presented a fearful challenge to all of the Catholic Religious in Guatemala during the 1980s. Many catechists were among the more than 200,000 people who were slain. Although Sister Immaculata’s name was on a death list, she refused to leave her native “people.” And fortunately she survived – which was not the case for her close SCNY companion, Sister Barbara Ford, who was shot and killed.

One of the challenging undertakings of Sister Immaculata was enabling her people to have better sight by giving them access to cataract surgery. Although the base clinic near her house, the convent in Novillero, was quite meager by U.S. standards, it served as the operations center for the first on-site cataract surgeries for the native people. In 2005, a medical team from Spokane performed 27 cataract surgeries with results that seemed almost miraculous to the people. One young mother named Carmelita, who had cataracts in both eyes, was able to see her baby, Isabel, for the first time. The joy of the event even brought tears to the eyes of the Spokane medical team.

Hurricanes, earthquakes, and tropical storms brought on many occasions for Sister Immaculata to extend both her physical and spiritually reassuring care. Many a time she arranged for food and shelter for families forced out of their washed-out adobe homes. When the torrential rains of Hurricane Stan forced the inhabitants of 10 mountainside villages to move into refugee camps on more stable, but higher (11,000 feet) land, Sister Immaculata was there to help with food, blankets – and prayers.

Sister Immaculata was deeply appreciated by her Religious community and her church. Among the many awards she received was the Papal Medal “Pro Ecclesia et Pontifice” (“For the Church and for the Pontiff”) which was awarded in recognition of her service and presented to her at St. Patrick Parish in Pasco in 1992. In recognizing her service, Bishop William Skylstad said, “Sister Immaculata presents us with a strong witness of faith.... Words can only begin to express the gratitude of our diocese for the good accomplished at Sister’s hands among the poor in Guatemala.”

One could not encounter Sister Immaculata, without sensing an inherent holiness that she projected to all she met. Whether it was in the 7 a.m. or 5 p.m. prayers in her chapel, or her answer to a frequent knock at her door from someone needing assistance, or in the casual conversation with a visitor, she was always gentle, humble, and guided by the Spirit.

As the years mounted toward her recent 94th birthday, Sister Immaculata’s thoughts remained on a concern for others. In her last two days, as other Sisters from New York gathered in her house for her farewell, she expressed concern that there be enough food and accommodations for those that came to wish her God Speed – words that sound very much like those of a saint! 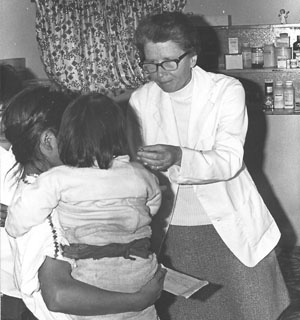 Sister Immaculata ministers in a Guatemala health clinic in this undated photo. (IR photo courtesy of the Spokane Diocese Archives)