• See all of GSR's Nuns on the Bus coverage here. 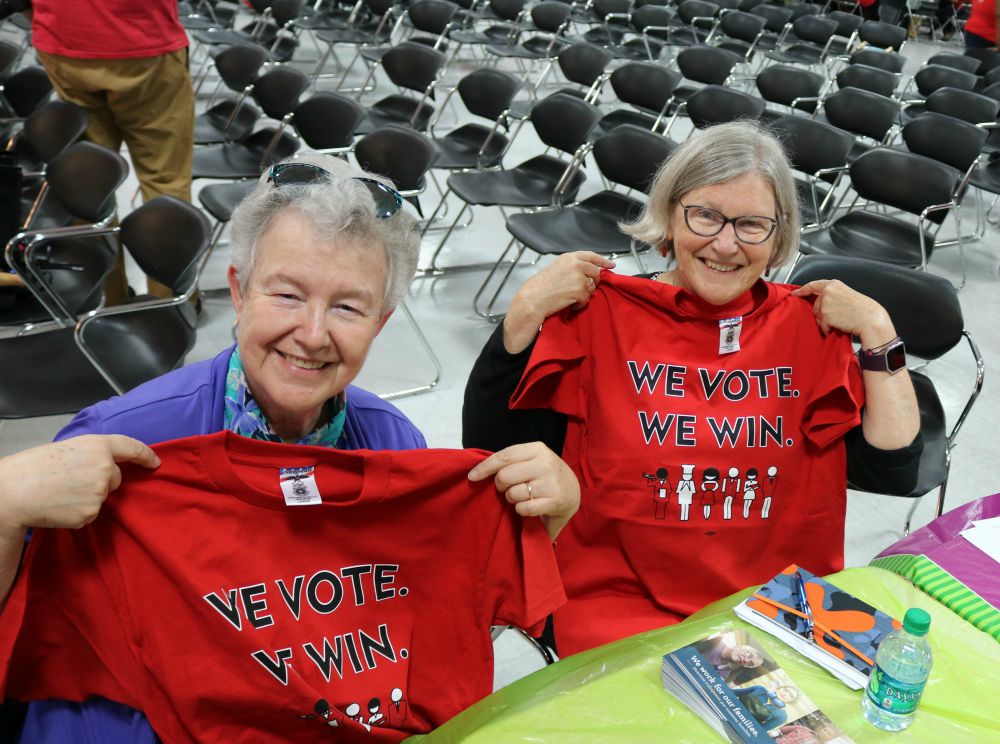 We got right into the spirit of the vigorous chants of the members of the Culinary Workers Union Local 226 in Las Vegas, Nevada.

After a long drive from California, we joined them Tuesday afternoon for a meeting with a large group in the union hall, listening to the issues they have with some of the casino owners. Most of the big casinos have come to an agreement with the workers on living wages and benefits, but there are still a few holdouts. The workers suspect it is not lack of funds that stands in the way — one owner just spent over $20 million on a daughter's wedding. (One of the workers whispered into my ear that $2 million of it was for the cake!)

There are about 50,000 workers in the Culinary Workers Union Local 226, which includes food service industry workers in the big casinos and hotels as well as people in housekeeping and other aspects of the industry. Of these, 54 percent are women and 55 percent are Latino. There are workers from 173 countries who speak 40 languages. That they can organize themselves at all under those circumstances is a minor miracle, and that they have managed to do it so effectively is a major miracle! They have some talented and dedicated leaders.

I talked to one leader, Rashauna, who had taken a three-month "political leave" to work at turning out the vote for a candidate known to be more friendly to unions; she and many more had sacrificed their $20-per-hour earnings for $12 with the assurance of continued employment at the end of their leave thanks to the union. Their enthusiasm, love and respect and support of each other was inspiring to all of us.

It had been a long and exhausting day, so we were glad to see our rooms at the end of the second day: rooms at one of the less expensive casinos on the old Las Vegas Strip. There are no motherhouses or big convents in Las Vegas, and the casinos like to lure customers in with inexpensive rooms and food!

As tired as we were, there were some who ventured out to see the bright lights, and one sister even found a zip line to try. In spite of a few bleary eyes, we were at the union hall bright and early the next morning for our adventure in canvassing.

We helped prepare packets and distributed ourselves among the groups going out to canvass the neighborhoods to push their candidates for the 2018 midterm elections and urge everyone to get out the vote. First, the leaders outfitted us with red shirts and hats and assigned us to teams. That was after a few more rousing choruses of "Si, se puede!" and "U-nion! 2-2-6!" and "We vote, we win!" 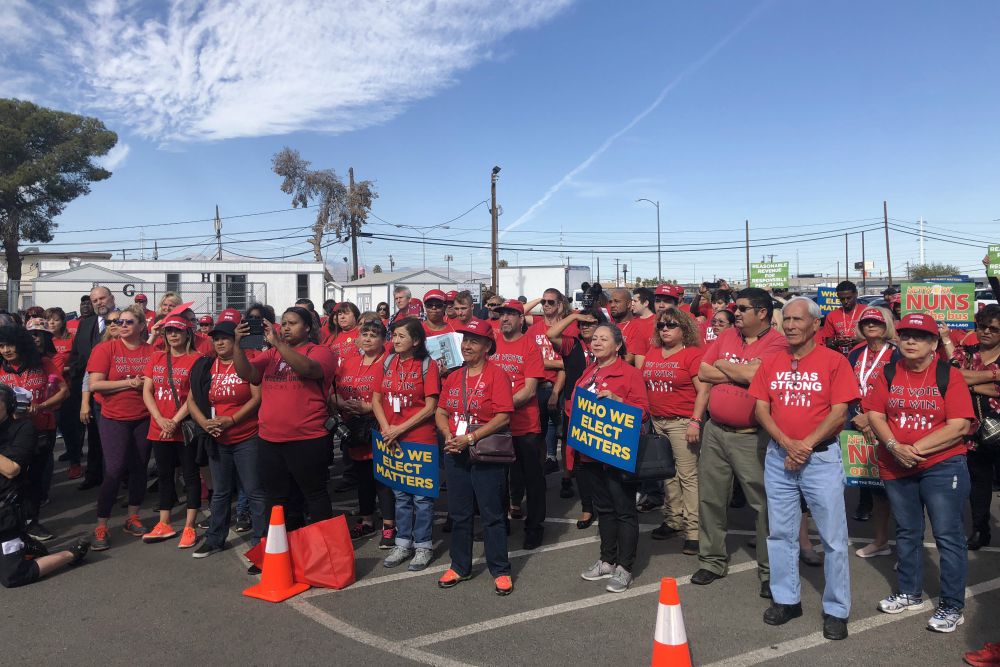 Members of Culinary Workers Union Local 226 rally Oct. 10 in Las Vegas to hear us talk about the tour and about our support of their work before we all left for canvassing. (Provided photo) 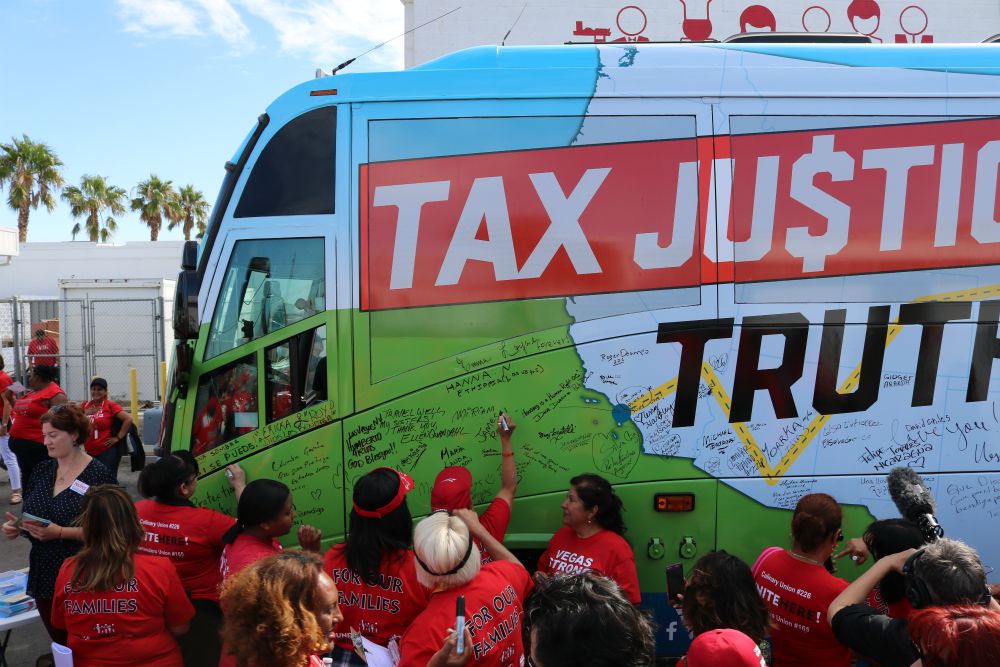 After we returned to the union hall and the workers signed the bus, we left Nevada, eating lunch on the bus, not for the first time. What gorgeous desert and mountain scenery! We enjoyed seeing Lake Mead and going across the Hoover Dam into Arizona; when we saw our first saguaro cactus and Joshua trees, we knew we were ready for our next adventure in Phoenix.

We are educating ourselves by site visits and talking with people; that's part of the listening mission of Nuns on the Bus. But we are also determined to educate people about what the tax policy really means for real people and to encourage them to use tax policy as one of the most important norms of who should get their vote.

Each day, we begin with half an hour of prayer together: once in a motherhouse chapel, once in an unused convent chapel, once in a convent community room, and once in Sr. Simone Campbell's hotel room at the casino. That and a cup of coffee gets us going.

One of the best tools of the bus is the town hall developed by Network staff as an educational illustration, an effective graphic description of the effects of tax inequity. Without giving away the plot, let me just describe it as a human bar graph that introduces the audience to a real character Network has encountered in the process of listening to people all over the United States.

The exercise dramatically illustrates how much that person benefited (or not!) from past and current tax policies. If you figure in other events likely to result from the tax changes, the lower economic quartiles of people even go backward.

Of course, the talented Nuns on the Bus take the parts of the characters. Doing the actions the exercise called for made me feel in my bones and muscles the desperation and despair of people in the middle and lower quartiles. The take-home lesson is (and you have heard this before): The lower economic groups suffer while the upper ones benefit. 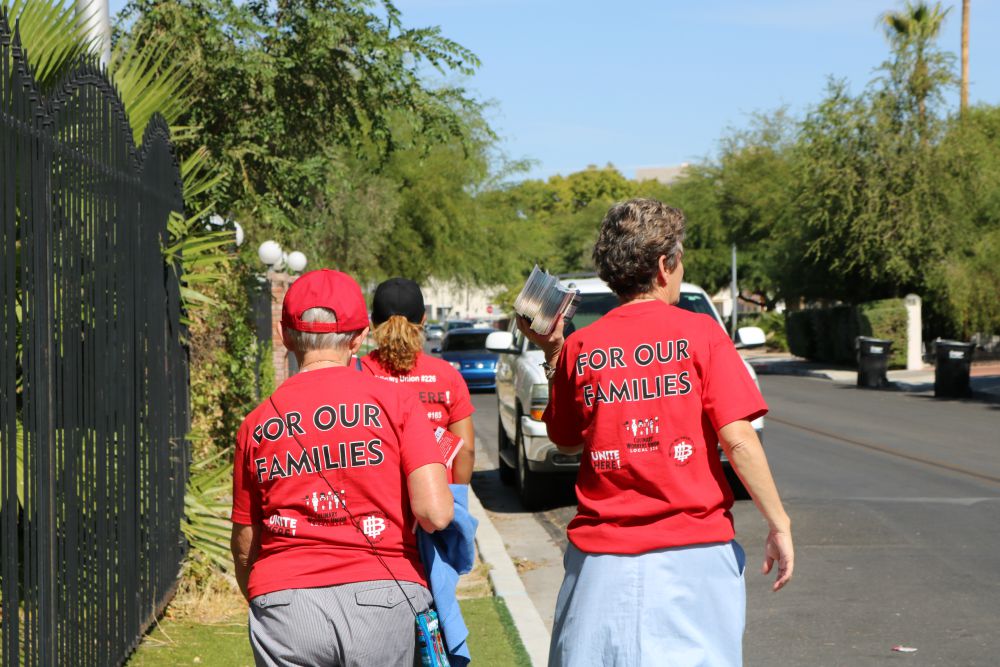 A new insight I gained from the exercise is an understanding of why the richer people often cannot even see the suffering of the less privileged. They just do not move in the same circles — they are so far away from the other's reality. It may also explain why some feel isolated, lonely, angry, and threatened by any discussion of tax justice.

When we finish tonight, Thursday, we will have done this in four parishes or churches, each with its own personality and challenges. The discussion after the activity has been lively, as the audiences talked about how the tax changes would likely affect their area or city or state and what they could be doing about it. Some great ideas have been suggested! The people have the answers. Network then collects their input and uses it in later educational activities.

In legislative visits, we generally try to meet with a congressperson (usually one we know voted for the tax bill and does not agree with us!) to explain our position. We are meeting with them to hold them accountable for what their votes are doing to their constituents.

The first had to postpone the meeting with us but promised to meet with constituents on this topic later. We are heading for a meeting with office staff of U.S. Rep. Martha McSally of Arizona as I write this on the road to Tucson.

Social Justice | Nuns on the Bus 2018: Paying our union dues then heading south

This is how we heal the rifts