By Sr. Andrea Koverman of the Sisters of Charity of Cincinnati

Day 15 was a busy one! We began with a lobby visit at the office of U.S. Rep. Keith Rothfus in Beaver, Pennsylvania. Rothfus' field director, Patty Hoover, met with a contingency of the Nuns on the Bus, including Social Service Sr. Simone Campbell, Presentation Sr. Richelle Friedman and me. But the most important members of the group were Rothfus' four constituents. They were disappointed not to be meeting with Rothfus himself, but Hoover said he is an extreme introvert and doesn't meet with his constituents because he is shy.

Erin Gabriel is a young mother with four children, all of whom have autism. Her youngest daughter, Abby, was with her today. Abby has multiple complex medical challenges in addition to her autism. She is both nonverbal and nonambulatory. Erin expressed the fear and extreme anxiety she experiences around the proposed cuts to Medicaid/Medicare and what they would mean for Abby's quality of life. Erin said her biggest fear is that Abby might beat the odds and outlive her mother, and she wondered what will happen to her daughter and who would provide for her needs.

Erin challenged Rothfus' professed pro-life stance, saying it isn't pro-life to not protect the people who are so vulnerable they depend on the social support services for their very survival. Erin believes those kinds of policies actually encourage abortion, because people are afraid they can't afford to support a child with special needs.

Barbara Yorns lives in public senior housing and said the 100 or so people she lives with are all dependent on their Medicaid. They are all very worried because they are barely surviving as it is, and any cuts would be catastrophic for them.

Don Crutchman is an organic farmer who shared how concerned he is about the lack of support for the immigrants who come to our country. He said what a benefit they are to our economy, and he is distressed that Rothfus doesn't take a stronger stand in opposition to party-line rhetoric on immigration and other issues. He challenged Rothfus to offer new solutions to divisive issues and to represent the wishes of his constituents over those of the Republican Party.

Hoover defended Rothfus' position on the tax policy and the reasons he supported its passing. We asked her to communicate to him that the deficit created by tax breaks benefiting corporations and the 1 percent should not be made up at the expense of the most vulnerable members of our communities.

After leaving Beaver, we grabbed lunch to go and headed for a rally in Erie, Pennsylvania. Upon arrival, we were warmly welcomed by Mayor Joe Schember, Erie County Executive Kathy Dahlkemper and Erie NAACP President Gary Horton. Sisters from local communities led all gathered in prayer and song, singing, "Justice Will Roll."

Dahlkemper talked about the historic poverty of the region and how strongly the proposed cuts to basic services will affect people already struggling to get by.

Horton told us that Erie County is the worst county in the country economically for a black person to live. A young member of NAACP explained how difficult it is to manage school debt and challenged the audience to vote for policies that help young adults pursue education and career aspirations and recognize the investment that is our shared future.

Terri Hulihan is a constituent who shared her story of going from a successful career with a healthy salary and benefits to being dependent on Medicaid/Medicare to cover a series of unexpected and serious surgeries. She was unable to continue working or to find insurance for what is now a pre-existing condition. She said she would not be alive today if it weren't for the support she got from Medicaid and Medicare and asked the audience to remember that for many people, these benefits are literally a matter of life or death.

The crowd responded enthusiastically to the chant led by Horton: "When we vote, we win!" We left with a stack of signed cards on which people pledged to support reasonable revenue for responsible programs and many more signatures on the bus!

Excitement always mounts inside the bus as we pull up for a town hall, rally, press conference or lobby visit. Hospitality always awaits us. Parishioners at St. Joseph University Parish in Buffalo, New York, invited us to come early for a delicious, amazing supper. After supper, we arrived at the church to be warmly welcomed by 400-strong who came out on a work night to participate in the town hall. U.S. Rep. Brian Higgins, the congressman for the Buffalo area, welcomed the sisters and affirmed the parish for its justice work.

The goal of the Nuns on the Bus town halls is to demonstrate who receives benefits from the Republican-passed 2017 Tax Cuts and Jobs Act and who loses the most if the programs Republicans propose cutting to pay for the tax law materializes. At the town hall, we visualized for the audience who benefits and who loses starkly, revealing that wealthy individuals and corporations overwhelmingly benefit while the lowest income bracket would fall even further behind.

Participants were then invited to engage in conversation on two questions: How do the tax cuts impact Buffalo? What are some solutions?

Buffalo is among the poorest cities in the country. Among the problems identified here were segregation and growing isolation; lack of affordable housing; education, especially for poor children; transportation; and increase in crime and hunger. The solutions included the need to become politically involved, build relationships across neighborhoods, support legislators that are working on behalf of the people, and use of the media to communicate priorities.

So many expressed an appreciation for the quality of the conversations they engaged in at the town hall. The evening culminated in the much-anticipated opportunity to sign the bus. The stories we hear and the people we meet at each stop figuratively join us on the bus for the remainder of the tour. 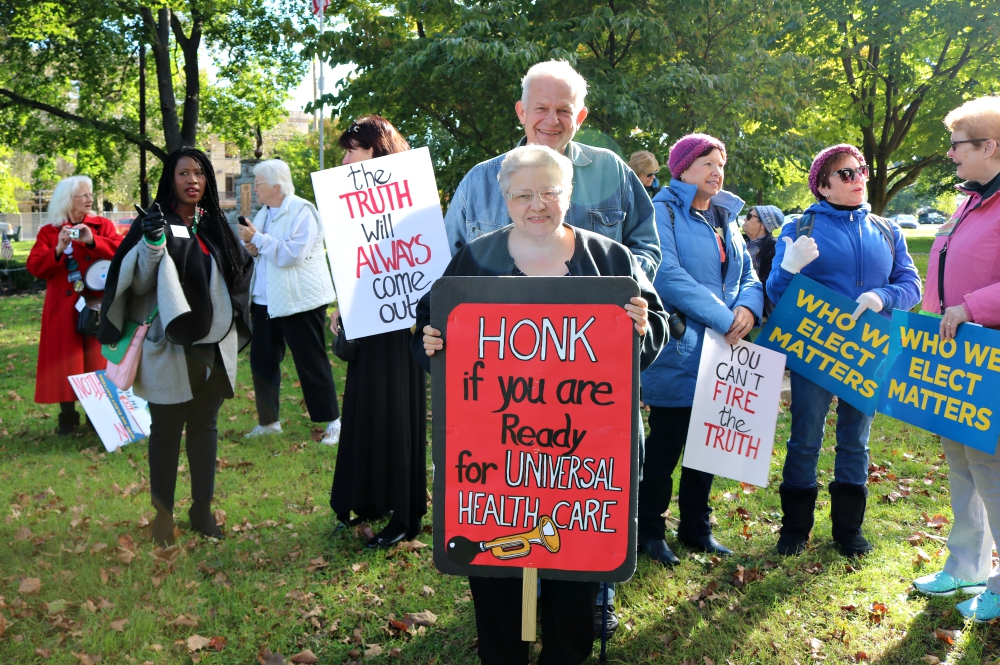 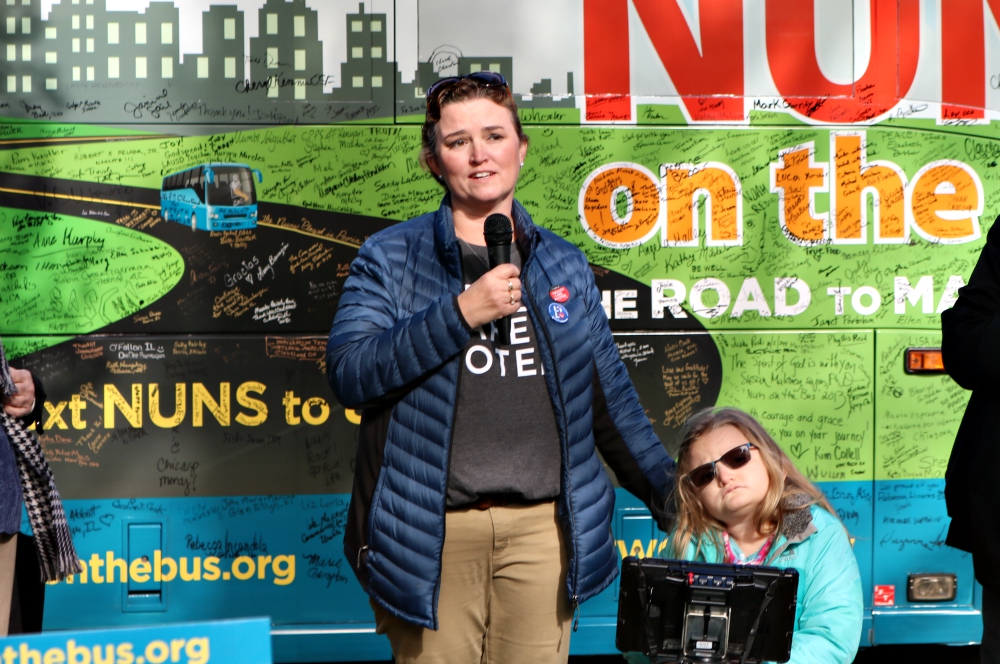 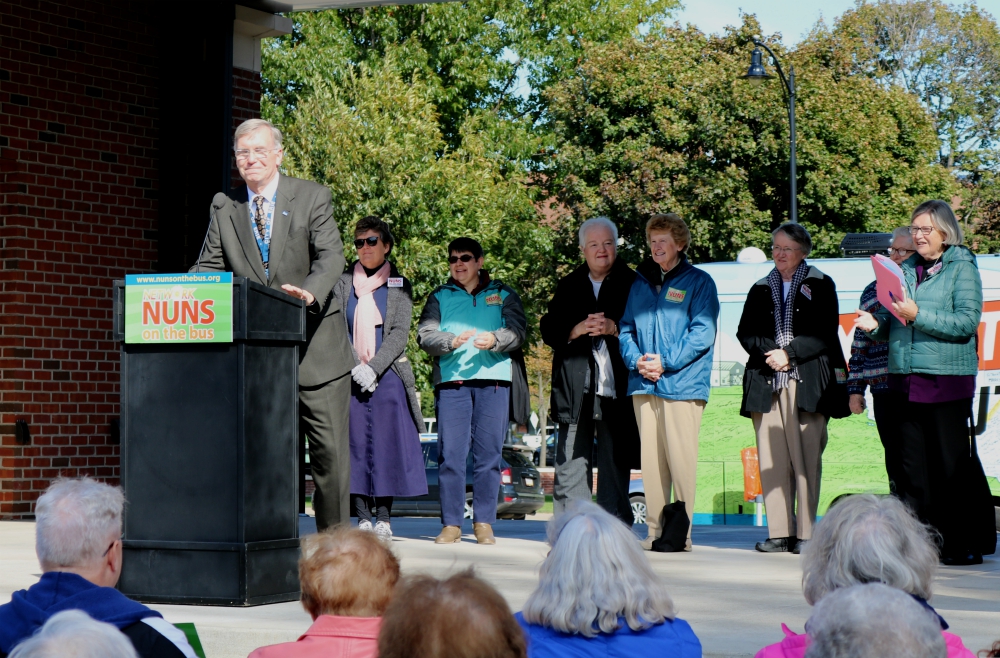 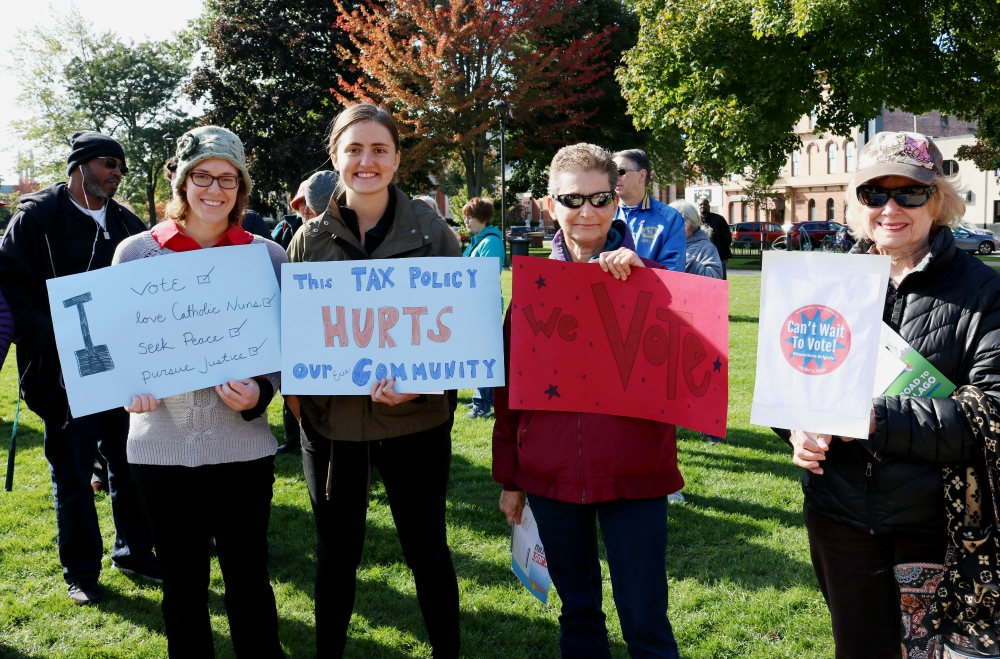 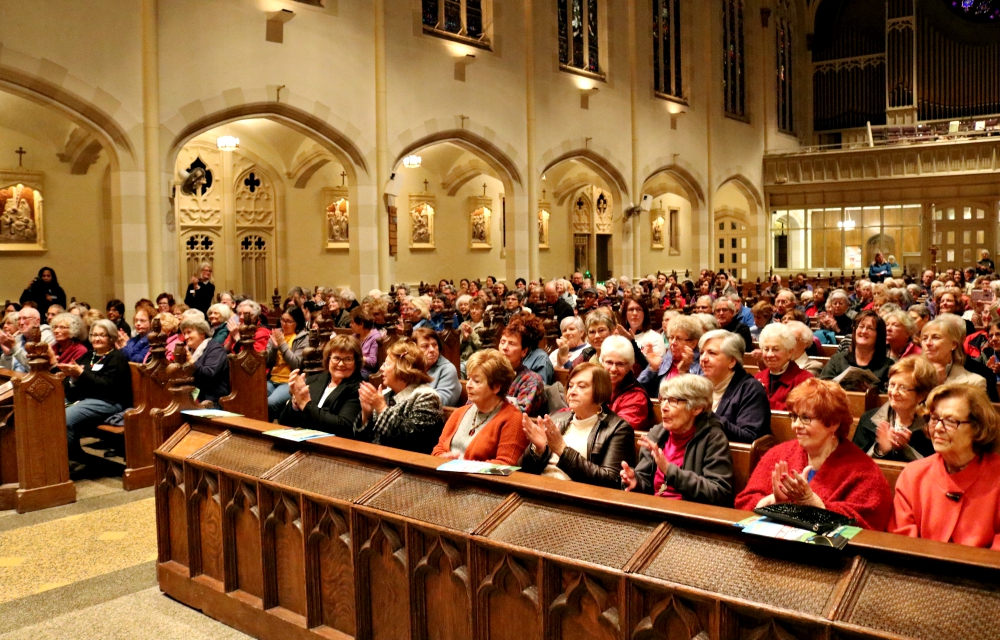