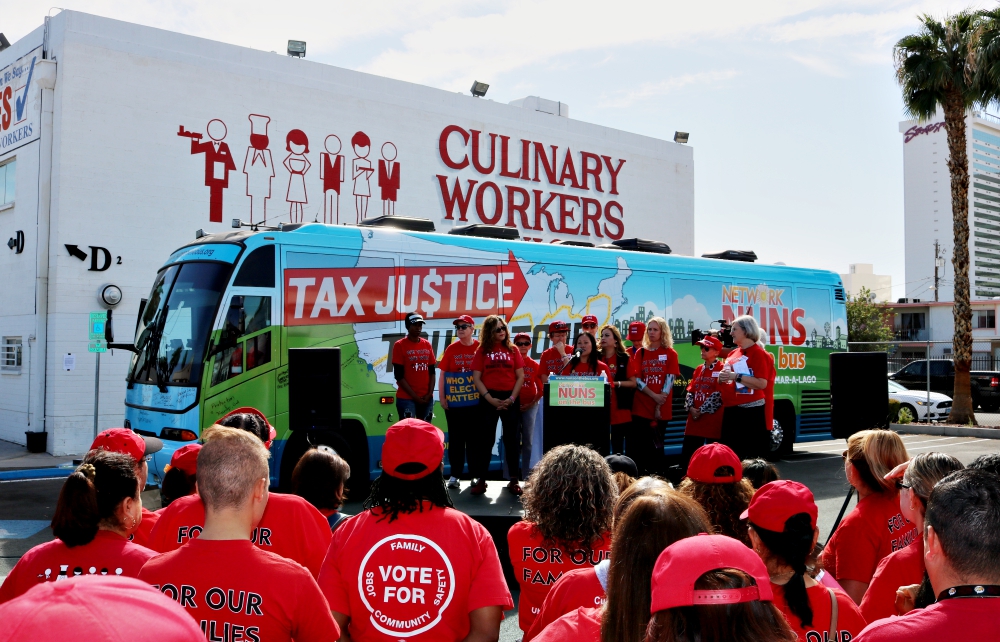 The Nuns on the Bus with members of the Culinary Workers Union Local 226 before an Oct. 10 canvassing session in Las Vegas (NETWORK Lobby for Catholic Social Justice / Colleen Ross)

Oct. 9: Lobby visit to the office of U.S. Rep. Mimi Walters and rally in Irvine, California

By Sr. Reg McKillip of the Sinsinawa Dominicans

Our first event today took place outside Rep. Mimi Walters' 45th district California office. We originally had a visit scheduled with Walters; however, she needed to postpone our meeting. The visit will take place with local constituents sometime in the coming weeks.

As has been the case with every event these days, we were greeted by a very enthusiastic crowd. Dominican Sr. Quincy Howard opened the event, telling people why we are here: to hold our elected officials accountable for their votes on the 2017 tax law.

We had three speakers sharing their message for Walters, each of whom delivered a powerful message from distinctly different experiences.

Lynn Woods is a retired district manager for Orange County Children Services, where she worked with a state-run program for children with disabilities. This program provides medical care to children with life-threatening conditions and is financed primarily by Medicaid. Lynn's concern is the cuts to Medicaid that will happen to pay for the 2017 Republican tax law.

Our second speaker, Helen Gardner, shared how she and her family benefited from affordable housing, health care programs and other services in the past. When the Affordable Care Act passed, she had health insurance for the first time in many years. Helen said that without these programs, she would not be here today. Helen has been able to give back to her community by serving on the board of the Camino Health Center and the board of a nonprofit low-income housing developer. She also works with Orange County to provide emergency shelter to newborn babies and works hands-on with parents to help find make their way back from homelessness. 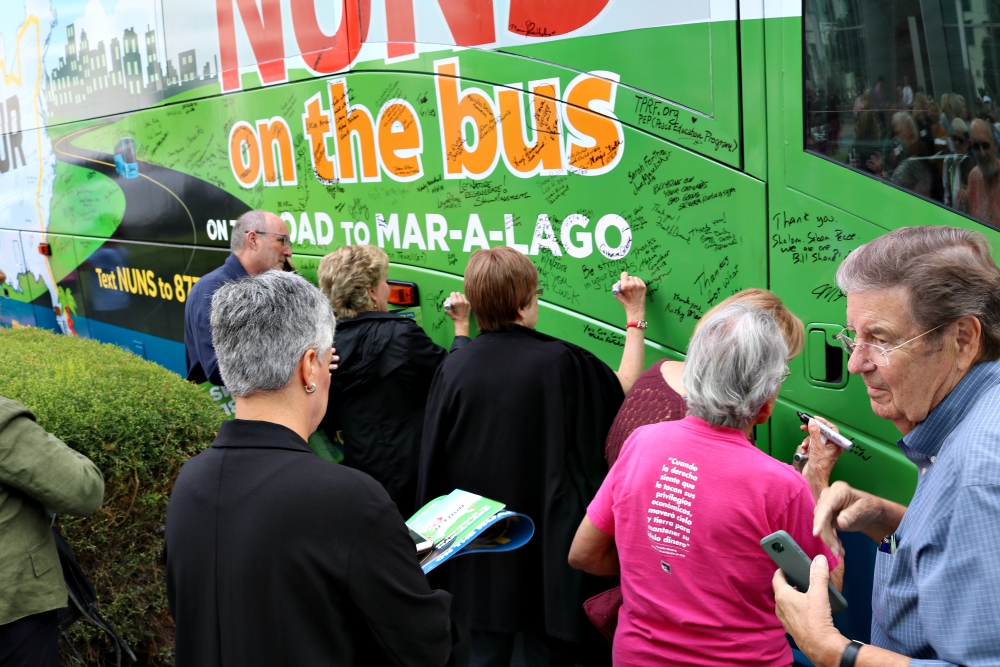 Supportors of the Nuns on the Bus sign the bus Oct. 9 after a rally outside the Irvine, California, office of U.S. Rep. Mimi Walters, who represents California's 45th district in the House of Representatives. (NETWORK Lobby for Catholic Social Justice / Colleen Ross)

Helen is able to contribute to her community so much today not because of her individual talents, but because of the services she received from her community. Helen reminded us that every person who utilizes these programs has something to give. We need to continue to fund programs that mend the gaps so people can give back to the community using their unique talents. Helen reminded us of why we are doing this when she stated, "If one person hears our message and their heart is softened toward those who are living in poverty, then our purpose is served."

Sr. Mary Therese Sweeney, a Sister of St. Joseph of Orange, California, and our third speaker, serves as a sponsor of the St. Joseph Health Ministry. She spoke about how important it is that when you are in a leadership position, whether in business or Congress, your humanity must stretch further then your personal empathy for other people. She asked us and Walters to consider whether we can be satisfied that 20 percent of the kids in Orange County are going to bed hungry and that these kids are not getting the nutrition they need so they can develop as they should. She challenged Walters to "move from her own personal deep care for others that we have seen in many ways and to apply those deep values as her role as our representative."

After hearing these three speakers, I resonated with what Social Service Sr. Simone Campbell remarked to the crowd: "Data and heart, you cannot defeat the combination. When the truth comes with compassion that creates action." And so, we were off to create more action!

By Sr. Dusty Farnan of the Adrian Dominicans

After a five-hour drive from Los Angeles, we arrived in Las Vegas at the Culinary Workers Union Local 226. That afternoon, we had the opportunity to be with lead organizers and workers there for an hour-and-a-half conversation.

We learned that the Culinary Workers Union is the largest workers' organization in Nevada. It is mainly an immigrant organization made up of people from 173 countries. The union is 55 percent Latinx, and 54 percent of the members are women.

The culinary union recently settled a contract for 50,000 workers. They still have 2,000 workers without a contract and three other companies where contracts have not yet been settled. The campaigns are difficult.

The culinary union also works with non-union companies, including the Station Casinos workers. Station Casinos is the third-largest corporation in Las Vegas, with 10 different Station casinos. The culinary union estimates that there are more than 6,000 workers in these casinos, and the workers have been fighting for a union for years. Since 2010, the workers have fasted, held rallies, and even sat on carts to win their union elections. 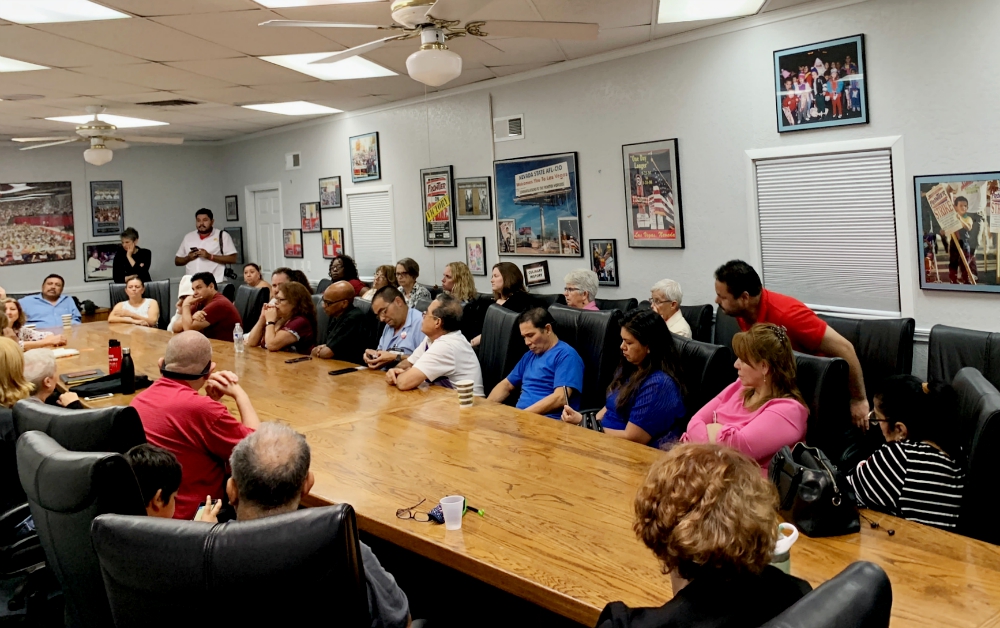 Members of the Culinary Workers Union Local 226 meet with the Nuns on the Bus at an Oct. 9 roundtable in Las Vegas. (NETWORK Lobby for Catholic Social Justice / Colleen Ross)

In 2016, workers focused their campaign on the Boulder Station and Palace Station casinos. They won the Boulder Station union election by 67 percent but lost Palace Station by 1 percent. However, due to violations by the companies, the National Labor Relations Board supported the union elections. The companies continue not to recognize that the union won, especially the Palace Station. Station Casinos is still refusing to negotiate with the workers. In spite of this, the culinary union is still trying to negotiate contracts with more casinos.

The workers were sure to tell us that the owners of Station Casinos were known to be big donors to President Donald Trump's campaign.

Green Valley Ranch casino and the Palms were other victories for the union. The companies appealed this victory three different times in three different courts. The culinary union won all three of these appeals.

It was an eye-opening opportunity to meet these women and men who have great commitment to fighting for dignity of their work. We heard powerful personal stories of the workers and witnessed their pride in developing organizing skills that will help them to earn a better living for themselves and their families. As we ended the meeting, we invited the workers to sign their name on our bus so that the bus will carry their names and their stories to Mar-a-Lago.

In the evening, we went to St. Elizabeth Ann Seton Catholic Church for our town hall for justice. We shared a visual representation of the consequences of the 2017 Tax Cuts and Jobs Act. We had a lively discussion that ended with some significant suggestions as to how we might fix the tax bill from those in attendance. Some of these were to be kind to one another or volunteer for an organization that helps those in need, such as Habitat for Humanity, which assists those who are in need of affordable housing.

We ended with gratitude for those who came to our program.

Ministry | Nuns on the Bus 2018 travelogue: Off to create action