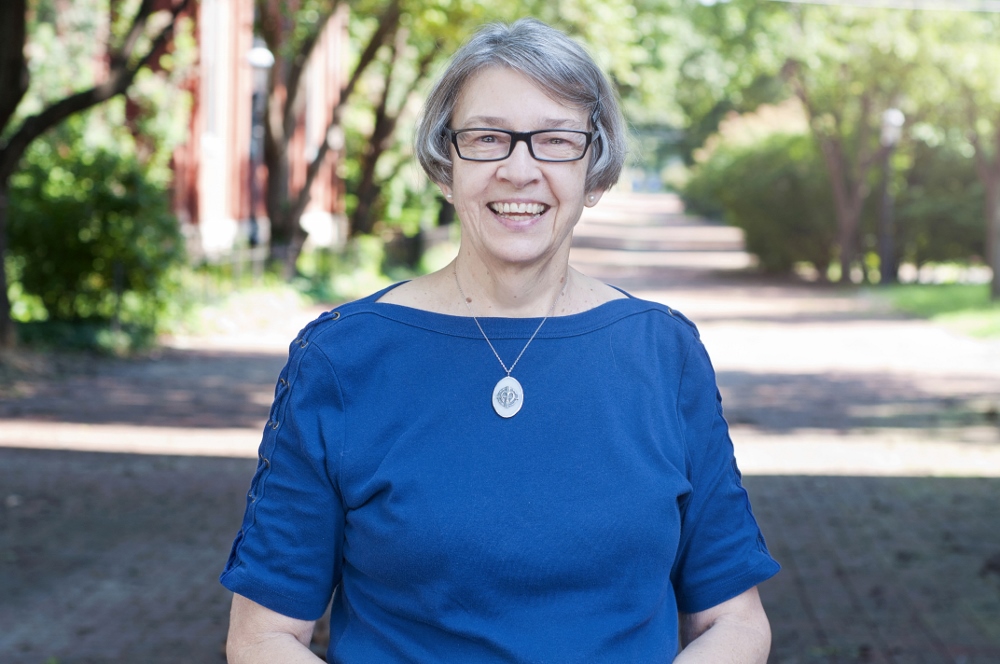 School Sister of Notre Dame Rose Rita Huelsmann says she has learned that whether someone is incarcerated or not, we are all the same. (Kimberly N. Photography)

Earlier this month, School Sister of Notre Dame Rose Rita Huelsmann retired after 13 years as the coordinator of volunteers at the sister-run Criminal Justice Ministry, which provides services to currently and formerly incarcerated people in St. Louis. During her last week on the job, Huelsmann spoke with Global Sisters Report about what she has learned and what she hopes will change in the way the United States does incarceration.

GSR: You spent most of your career in education. How did you end up in this ministry?

Huelsmann: I finished teaching, then I did a sabbatical. When I came back, I had to choose a new ministry. Sr. Carleen Reck — who was the executive director of this ministry — talked to me quite long about it. I was discerning between three ministries, but eventually, I ended up with this one.

Why was this the one?

I have always leaned toward the poor in ministry, even in the schools where I had been. And this was definitely working with the poor; that's who goes to jail. If you have money, then you get a lawyer, and you don't have to do your waiting time in jail. But if you don't have money, that's where you go.

In the last 13 years, what have you learned about the criminal justice system in this country?

About the people inside, I learned we are all the same. And about the system, I learned that they're built on retributive justice and — from where I look at it — it only does harm. I wish we could use restorative justice. Retributive is all about punishing, and punishment doesn't seem to give life. Restorative is all about who is hurt. It's about the person. Who is hurt? How do you restore that person back to the community?

We punish to the point of death. Thirty-one states still have the death penalty. I just think if we did restorative justice in preschool all the way through, we wouldn't have prisons. It would be taking care of the person all the way along.

In what way does retributive justice start in schools?

Oh, kids are punished for being late, they're punished for missing school — misbehave and they're put out of school. That's a punishment. You know, rather than, "What do you need to get here on time? What happened that you couldn't be here yesterday? Is there something the community can do about that? Is there something the school can do to get you here?" The kids who are missing are usually the kids with absent parents. Something broke down along the way, so who can help mend that?

I'm interested in what you, as a coordinator of volunteers, think people need in order to care about inmates. That's an often-neglected demographic.

I find once people go inside, they meet somebody. Once they go inside and meet the people and realize that we're all the same, they get an understanding. It's not, "What's wrong with this person?" but "What happened to this person along the way that made them end up here?" And they start to see them as people that they've met, not as the person they've seen on TV. Usually, the picture that is flashed on TV is right after someone's done a crime, when they're in rage or when they're high, when they're having a really bad moment. That is what the public sees.

But when you go inside and meet somebody at a prayer service, you get to realize how deep their faith is, what they're getting to know about themselves, how many believe they're in there because Jesus is trying to save their life physically and spiritually. Many count it as their little retreat time with the Lord. So once [volunteers] realize that there's another aspect to this "criminal," they gain a lot of respect for them.

What do you hope will be the legacy of Criminal Justice Ministry?

I hope there will be continued services given to inmates. Faith-based services, too. We do a lot of programs that help people to become whole, and I think they're important. But there has to be a moment where they can express their faith, too. It's such an intense time inside. They're in four walls, and there's nothing else happening; it's themselves and their memories, and that's a real intense time for a person. But a lot of healing can happen if the right person shows up or the right materials show up.

How do you see the Holy Spirit working in Criminal Justice Ministry?

That's how every volunteer got here. Totally the Spirit's in charge. They have to be moved, I think, by the Spirit to be interested. Then, when they follow that movement of the Spirit and call, then I take it from there. And the Spirit continues to act because that's how, once they go inside, they can have a change of heart.

The journey is as much about the volunteer as it is the inmate. They minister to each other. Nobody goes inside without feeling ministered to. Because they're learning a whole new world just as that inmate is learning a whole new world. So that's a huge commonness they share. And then, hopefully, the volunteer who comes out becomes an evangelist to other people who don't have that experience and can help them understand these people are valuable. We don't need to be killing them.