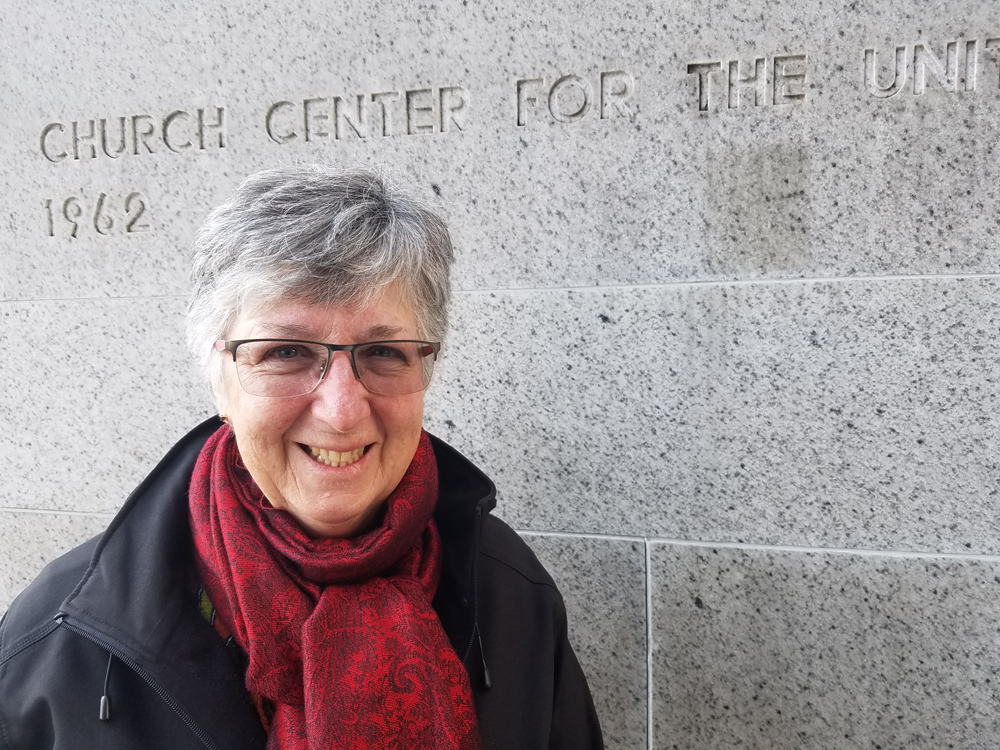 Sr. Colleen Jackson of the Sisters of Charity of Australia, outside the Church Center for the United Nations in New York (GSR photo / Chris Herlinger)

New York, N.Y. — Sr. Colleen Jackson is a member of the Sisters of Charity of Australia who brought her skills and background as a psychologist and refugee advocate to a recently completed three-month internship in New York at UNANIMA International, a United Nations-based coalition of Catholic congregations focused on concerns of women and children.

In her home city of Melbourne, Australia, Jackson works with refugees and asylum-seekers in three separate settings. As a counselor and advocate at Foundation House (formally known as the Victorian Foundation for Survivors of Torture), Jackson provides counseling for victims of torture and trauma as well as advocacy and support for asylum-seekers waiting for their refugee status determination process to begin — or be completed.

Jackson also ministers to a group of asylum-seekers who have been detained long-term, some of them for more than eight years. She has initiated a small "friendship group" for young refugees and asylum-seekers, many of whom arrived in Australia as unaccompanied minors from parts of Asia — including Sri Lanka, Iran, Afghanistan, Pakistan and Myanmar — as well as parts of Africa, including Eritrea. This group meets regularly with a group of young adult Australians who, in Jackson's words, "enjoy mutual friendship and enrichment through social engagement and support."

GSR: We hear the term "torture," but many people may not know exactly what that entails. Can you break this down for us?

Refugee trauma may arise in the context of racial, ethnic or religious conflict, political opposition, and displacement and persecution. Increasingly, it is recognized that movements of refugees worldwide are closely related to climate factors — particularly drought, water and sanitation, basic living needs — that trigger wars, conflict, loss of livelihood, extreme poverty and persecution.

Torture and persecution take a variety of forms, including severe physical and sexual violence, psychological violence, deprivation of rights and liberty, and threats to the lives and safety of family members. Displacement and migration can also add a particularly subtle yet devastating form of persecution and suffering through the denial of rights to family reunion. We are seeing this denial used by "destination countries," such as Australia and the United States, as a tool to discourage refugee movements and asylum-seeking. I find this particularly distressing and, frankly, a denial of basic human rights.

What are the symptoms of torture and trauma, and how they are treated?

Refugee trauma is a complex interplay of a person's history of torture and other traumatic experiences, ongoing risk and "protective factors." These include stable housing, health care, nurturing relationships, family and community support, personal coping skills, work skills and employment in the country of destination, as well as political, social and cultural factors, both past and present.

Refugees and asylum-seekers can struggle long-term with such experiences as nightmares and flashbacks of violence inflicted on them or others close to them. These can be chronic sleep deprivation, physical consequences of torture, poor nutrition and health care, depression and anxiety, loss and grief, as well as all the challenges involved in adjusting to a new country, language and culture. Torture, trauma and persecution can inflict deep shame, fear and anxiety and erode trust, relationships and health.

At Foundation House, we are guided by a trauma-recovery framework that focuses on four recovery goals. The first is restoring safety and enhanced control to reduce the disabling effects of fear and anxiety. The second is restoring attachments, connections and a sense of belonging. Third: to restore a sense of meaning, identity and justice. Finally, restoring dignity and value and reduce of shame and guilt. All this work is done individually, as well as in family and community contexts.

My work with the long-term detained is simpler in some ways, but no less difficult. For me, trust and respect are the two biggest factors of a meaningful, caring and healing relationship. Sometimes it is difficult to continue to witness the relentless persecution and trauma inflicted by a person's pre-arrival history and the conditions and policies under which they continue to live. Sometimes, and in fact often, the current circumstances and conditions for refugees and asylum-seekers are beyond our control to change, in the short-term at least. So the great challenge for me is remaining constant — caring, loving, listening, respecting. Very often, I know that I am the holder of hope for the refugee or asylum-seeker when they themselves find hope elusive.

Some still argue torture works and should be acceptable in some cases. What is your response to that?

Torture is a violation of human rights. Period. It is never acceptable. It is a particularly heinous act when you think that if people's families are threatened, those facing torture will do anything, say anything or even give their lives for the people they love. The depth of human suffering caused by torture is toxic and profoundly damaging and is never, ever acceptable or justifiable.

In your work at Foundation House, you must feel supported by your congregation.

Sisters of Charity take a specific fourth vow of service to the poor, something that stems from our founding and from our congregation's initial work with convicts and prisoners in Australia dating from 1838. We currently have sisters engaged with refugees in a variety of contexts.

I believe there is a common thread there, from the convicts and prisoners of the early 19th century to refugees and those seeking asylum today. For me, they represent a modern-day parallel, being among the most poor and marginalized in our community.

What keeps you going in your work? What is its spiritual underpinning?

"The love of Christ impels us" is our congregational motto. That certainly is what impels me. Jesus reached out to those in need, to those on the margins, as did our foundress, Mary Aikenhead. It is, particularly, Christ's love for us all that impels me. For me, those who have had to face such traumatic and damaging life experiences — flee their countries and uproot themselves and their families, or in some cases, separate from their families to seek safety and the hope of a better future — well, you can't get much more on the margins than that, can you?

As challenging and difficult as this ministry is at times, I regard myself as blessed to be so closely engaged with refugees and asylum-seekers. I am constantly in awe of, humbled and inspired by their courage, determination, resilience, faith — many faiths! — and selfless care for others. Despite the suffering, we manage to laugh and love and hope together. I am forever changed by this ministry and the people I meet — for good!

Tell us about your time at UNANIMA and the United Nations.

I've been blessed to engage in a three-month internship with UNANIMA International at the U.N. in New York. UNANIMA is a collective of 21 women religious orders from all over the world: 20,000 sisters ministering in over 80 countries, advocating for women and girls, migrants and refugees, and care of the earth. Having almost always been engaged in very grassroots ministries, the internship has given me the opportunity to better understand the global picture and the challenges facing the global community and our planet in the next few years.

We are called by the Gospel to love radically, and by Pope Francis, in Laudato Si', to an ecological conversion whereby we care for all life on our planet. The Sustainable Development Goals give us a universal and global framework for working together for the eradication of poverty and for justice, equity and peace for all. The wonder of the SDGs is that they remind us just how interconnected and interdependent is the whole of creation. When one person is left behind, we are all diminished in some way.

At the U.N., I've been inspired by the significant number of women and men religious from all over the world who are a persistent thorn in the sides of the U.N. and its member states, constantly bringing the voices of those most left behind to lofty and sometimes somewhat remote debate and advocating for their needs to be recognized and met. Their Gospel-driven perspectives, commitment, energy, determination and contribution cannot be overestimated.

Migration | Q & A with Sr. Colleen Jackson, advocating for refugees and asylum-seekers in Australia