If you are a Filipino migrant worker in Japan who has had troubles with immigration, chances are you have heard of Sr. Marcy Jacinto. She is the Mercedarian Missionaries of Berriz (MMB) nun from Zamboanga City, southern Philippines, whose name and mobile phone number are circulating in detention centers for undocumented migrants in Japan, or in homes of families of problematic Filipino workers.

However, even Catholics with no immigration issues know “Sr. Marcy,” who also devotes time on weekdays to the Block Rosary movement and on weekends to training lay leaders of parish communities and programs.

As of 2013, about 5,700 of some 200,000 Filipinos living and working in Japan were undocumented, a mission team composed of NGO and church workers estimated to Manila reporters.

The Commission of Japan Migrants, Refugees and People on the Move (J-Carm) of the Japanese Catholic bishops sent the team, including Jacinto, on a mission to visit some of the 75 Filipinos deported from their country. Philippines church and NGO officials were charged with gathering information on the Filipino workers and family members, and check out reports of injustice and neglect of citizens who were re-entering their country.

At a press conference organized by the Catholic Bishops Conference of the Philippines, mission member Lenny Tolentino of the Japan commission explained that in 2009 the Japanese Diet (legislative assembly) enacted a new immigration law that was to be implemented after three years. Accompanying policies set conditions for regularizing the residency of immigrants, including undocumented ones, she said.

Some undocumented migrants who were married to Japanese people, for example, could apply for residency. Filipino mothers of Japanese children and caring for their children in Japan could also be given residency status. Even Filipino couples in which one spouse was making a living could file for residency.

To regularize their residency in Japan, however, the migrants need to provide several documents to the Philippine Embassy, which did not offer special assistance to those who are unaccustomed to such procedures, Tolentino said.

"Sr. Marcy is our ambassador to the Philippine Embassy. She has helped so many people acquire and complete the many required documents," Tolentino told reporters. She reported that embassy personnel “trust church people.”

In the following interview with GSR, Jacinto tells her story of working with Filipino migrants and families in parishes, the Philippine Embassy and detention centers in Japan.

Did you choose to work with migrants in Japan?

When my superior sent me to Japan 16 years ago, she just told me my mission is to help the migrants. I went to Chigasaki City [southwest of Tokyo] in Yokohama diocese. The bishop of Yokohama commissioned me to be the coordinator of the Filipino migrants in his diocese. My main mission has been to train leaders. Now all our churches have leaders of Filipino communities.

Are you working with Filipino leaders only?

Mostly Filipinos, but some Filipina leaders married Japanese men who bring their husbands to church. The men have become Catholic and have gotten involved in church activities. Before marrying, these husbands were not very religious and did not go that often to the temple.

On Saturday and Sunday, I do parish work, mostly training church leaders or engaging in some activity with the leaders in the diocese.

On weekdays, I teach Block Rosary catechesis in church. Many of the children, mostly with Japanese fathers, are baptized, but they do not go to church. Because I am a sister, the husband and family eventually accept me. Little by little, they start coming along with their wives and take their children, too, even if not for worship. I do this on weekdays around my schedule to visit detention centers.

I also go to Shirakawa, Fukushima prefecture [more than 165 miles northeast of Tokyo], where a nuclear leak crisis continues after a 2011 earthquake and tsunami. We have a very good group of church leaders there. They are really united. They lead in all aspects and activities related to the church, not only liturgical, but social and all aspects. If I don't have money to help migrants, they give me money for them.

When do you go to detention centers and how do you travel?

We can only visit detention centers on weekdays. I have been going mostly to the detention center for undocumented migrants in Ushiku City, in Ibaraki, about three hours by car from Chigasaki. The priest coordinator of migrants’ ministry drives his car there. I also visit a center in Shinagawa in Tokyo and the Yokohama Immigration center, so it's not only in my diocese, but even farther. I reach as far as the immigration office in Nagano, [more than 157 miles] northwest of Yokohama, and beyond three hours’ drive.

What do you do there?

In Ushiku the priest and I visit Filipinos detained among people of other nationalities. We give them phone cards so the men can have credit to call their wives.

What was a memorable detention center experience?

There was a man named Willie. He often called me on the phone at night because I was always out during the day. He would talk on the phone about everything happening to him and his family. I was assisting him for two years and I helped his wife and son work to get documents from the Philippine Embassy. Sometimes his wife would have no money because Willie was detained, and she could not work. I had to pay the fees when I worked for the papers for his wife and registration of his son’s birth.

What struck you about Willie?

I was able to help many people, but Willie was unfortunate not to get out of detention. I remember when I visited him in jail he would cry. I would tell him, ‘Willie, let’s do all our best, but always, let us try to see the will of God.’ I told him I am not only working to help him, I am also praying. I tell him in case he is sent back to the Philippines maybe it’s the will of God. Let’s see what this is.

When I visited the detention center on Aug. 17, 2013, another overseas Filipino worker I was helping told me Willie was already deported. I called his wife but she didn’t answer anymore. Later the wife called me and said, ‘Sister, we are here already in the Philippines. We were among the 75 Filipinos deported. Our life here is very hard, Sister.’

How did Willie and his wife get to Japan?

They went there as tourists, then they stayed and worked. When they were deported, the Philippine government would not list them as victims of trafficking and give aid under funds allotted for that because the government said they went to Japan on their own.

Their son was born in Japan?

Yes. When I saw them here during the fact-finding mission for the conditions of deported Filipinos, they were very sad, but the little boy was visibly very happy to see me. He must have felt so lost, being in Japan for years and then waking up one day in a strange country. In Japan when we would go to the embassy, he would cling to me instead of his mother. She said he felt more secure with me in an office like that.

We were arranging for everything. They had no papers. Now they have complete papers – passport, marriage certificate and the boy’s birth registration.

How do you come across these people you help with immigration problems?

People just call me and say they have some problem. They get my name and cellphone number from Filipinos I was able to help to get visas before they were arrested. When they are already arrested and detained my name is also known inside detention centers, so they call me from there. They tell me everything that happened to them, so I can see how I can help them.

If the wife has a visa and they have children in Japan, we try to file an application for provisional release from detention, and many of them get out. I get the wife’s telephone number and arrange to meet with her somewhere to discuss with her all the requirements she needs to prepare. When she has all the requirements I accompany her to the Philippine Embassy with a Japanese lawyer who serves for free.

Why do you help people who do not follow the law?

I am a sister, and I help OFWs [overseas Filipino workers] who are in trouble. I’m not a judge. They call me, they tell me all that happened to them, their status, and when I see they have the chance to stay, I work on the legal matter with the lawyer and the Philippine Embassy.

Did you receive any formal training in paralegal work?

I am a teacher who majored in general science. Then I studied at Miriam College in the Philippines for my M.A. in family life and community development. I had no training in paralegal work, but I know the work already. It started with my very good relationship with the embassy. Now I can approach them with all the problems and they help me a lot.

Are there sisters in your congregation who help you?

In our mission house in Chigasaki we have three Japanese nuns and I’m the only Filipina and the one working with migrants. Many of our sisters work in our schools in Tokyo and other cities.

How do you feel when you hear people saying you are their “ambassador?”

When I hear that I thank God for giving me this opportunity to serve those who are helpless and who are desperate. I say to them, when I help you, it is not only I who is helping you because, while I work on your case, I’m always praying for you and your family. That’s why many get out of trouble. 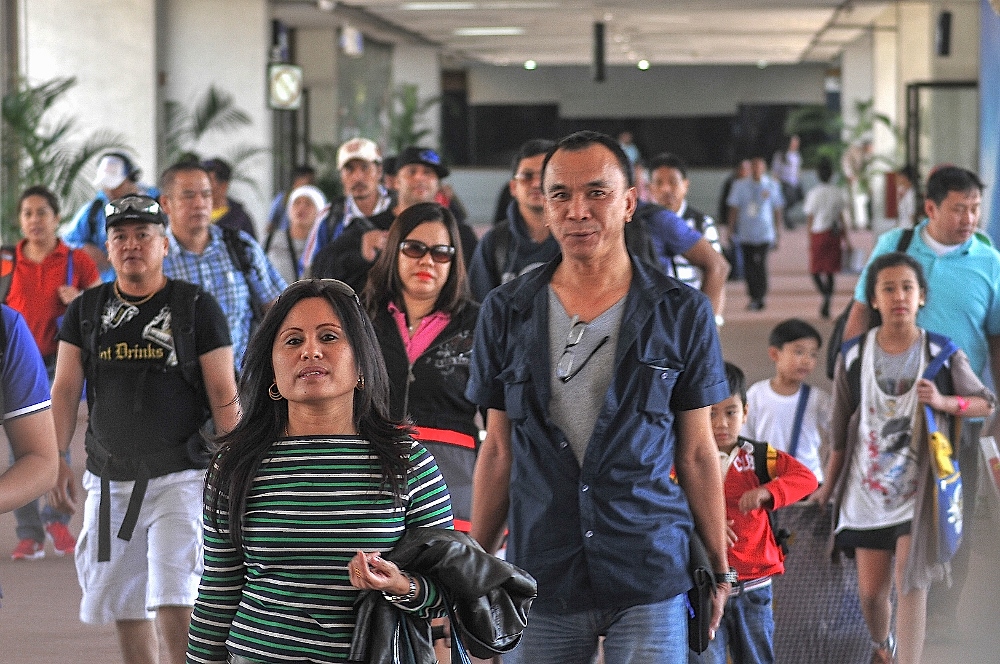