Q & A with Petra Dankova, working with today's refugees 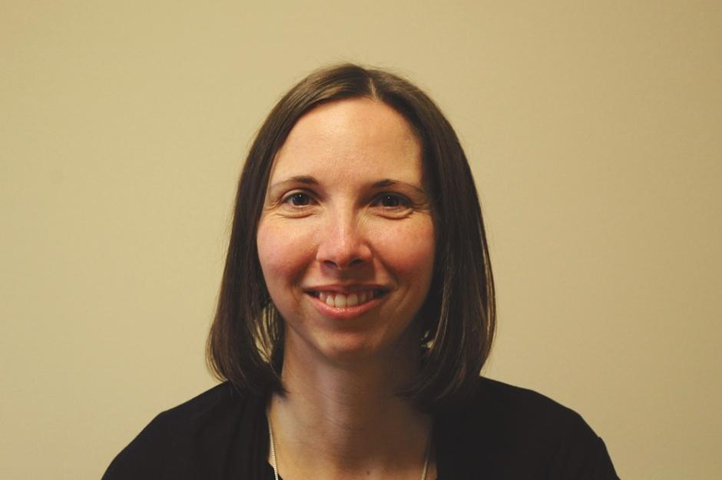 Petra Dankova is a passionate advocate for refugees at a time when the world has its highest number of displaced people since the end of World War II. According to the United Nations refugee agency, the number of refugees surpassed 60 million in 2015. The Syrian and Iraqi conflicts play a big role in those numbers, but millions have also fled countries such as Afghanistan and Somalia.

Dankova recently completed a period of discernment with the Sisters of the Holy Redeemer and decided to return to Europe to do more refugee work. In 2015, she coordinated a refugee hospitality project at the Sisters of the Holy Redeemer motherhouse in Wuerzburg, Germany. That follows eight years of work around the world with aid groups responding to various refugee crises, among them Jesuit Refugee Service.

She was born in the former Czechoslovakia when it was still a communist country, and Dankova's life journey has taken her not only around the world, but also from a completely atheist upbringing in her home country to the Catholic church, which she joined 10 years ago on Easter in the United States.

GSR: Help us understand the current migration crisis. Where does it stand now? Are people in the Middle East who have left Syria and Iraq now in a 'holding pattern'?

Dankova: First, we have to say that most Syrians try to stay in their home country — an estimated 6.6 million have moved within Syria to look for safety. In addition to that, about 4.6 million fled to the neighboring countries of Jordan, Lebanon, Iraq and Turkey, where they end up either in big refugee camps or try to find apartments and survive on their own. A little under 900,000 Syrians have applied for asylum in Europe since the beginning of the conflict there, which began in 2011.

When I was in Jordan in 2011, the Jordanians were trying very hard to help but were simply overwhelmed — every sixth person in that small country was a refugee. I visited many Syrian families trying to survive in the capital, Amman. Sometimes a family of six or seven was crammed into one bare room with just an old mattresses on the floor. I also met Iraqi families who some years ago fled to Syria only to end up in the midst of another war and lost everything all over again.

As a result, many of these people had immense mental health problems and simply could not deal anymore with the demands of the ever-changing system of refugee assistance. Many told me that they felt like they were on hold. Their dreams of a career for themselves or education for their children were interrupted while they lived the nightmare of total dependence on outside help. 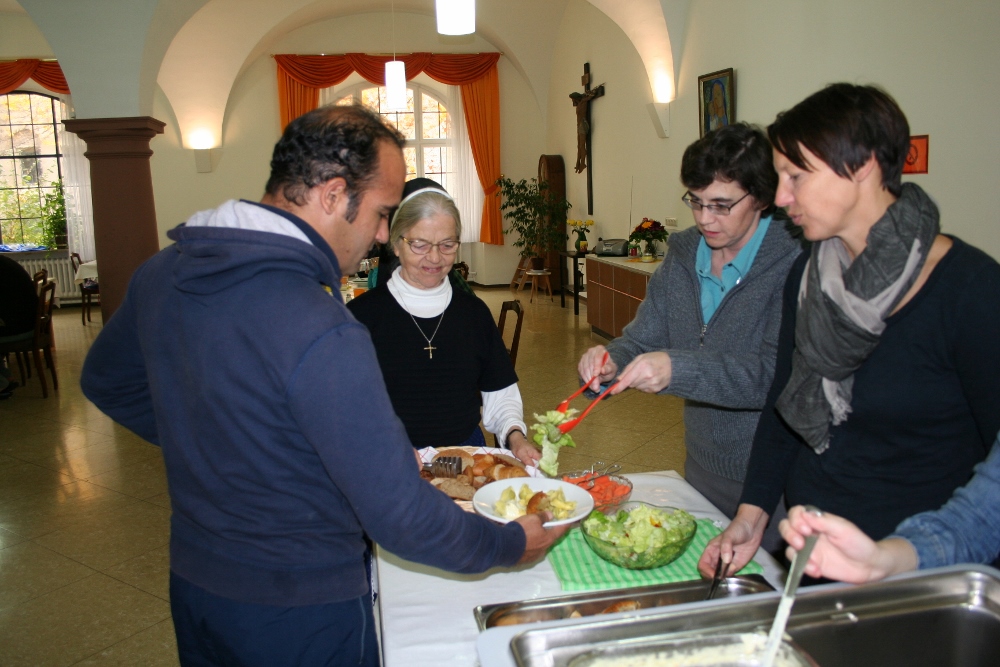 Sisters and volunteers serve meals to asylum-seekers at the emergency shelter of the Sisters of the Holy Redeemer in Würzburg, Germany. (Provided photo)

On my recent assignment to the Middle East, I sensed that there was no clear pattern to what refugees were seeking: Some wanted to return to Syria, others wanted to stay in other countries like Jordan, while others were seeking to go to the West. What were your experiences and observations in Europe?

The people whom I have met this past year in Germany often spoke of being forced to flee in stages further and further away from home.

First, they tried to move within Syria from the countryside to big cities like Damascus or Aleppo. When those became too unsafe — often after someone in the immediate family was killed or arrested — they tried the neighboring countries, where they may have relatives or at least understand the language. But often, they found the conditions intolerable and the countries overwhelmed by millions of refugees coming for the past five years.

So then, out of desperation, they decided to make the dangerous journey to Europe. Many told me that they knew that it was potentially deadly, but they felt that risking death seemed better than doing nothing, waiting for their money to run out and sinking into depression like many others around them.

Tell us about the work of sisters responding to the refugee crisis — perhaps the work that is long-standing and has gone unnoticed in many cases.

My general experience from around the world is that religious congregations are often known in communities for outreach to those in need and can fairly quickly make buildings and people available. Moreover, churches are considered sacred places of safety. So when displacement happens in their areas, churches and religious congregations can become places of refuge, whether it is providing emergency shelter and food or starting education and peace-building projects.

For example, the Sisters of the Holy Redeemer, the congregation with which I discerned until recently, were able at a very short notice to mobilize accommodation for 100 asylum-seekers in Germany and, shortly afterward, another building for unaccompanied children and several apartments for families who already received asylum. You could say that they turned the seeming curse of decreasing numbers of sisters into a gift of being able to provide hospitality to those in need.

The Jesuits have also recognized this unique gift many years ago and built up a worldwide network of refugee assistance programs through their Jesuit Refugee Service. As their lay co-worker between 2009 and 2011, I had a chance to see the strength of combining the long-standing Jesuit presence in countries before emergencies with professional teams of local and international humanitarian workers.

Do you think Europe (and the United States, for that matter) has lived up to humanitarian principles in this crisis?

People sometimes say, 'We can't let in everyone' — and that is a good point. But the refugee convention, which all EU countries have ratified, sets clear grounds for granting international protection, or asylum, to forcibly displaced people. So we already have rules that prevent the system from being misused.

But increasingly, European countries narrow the space of who is allowed to reach safety and apply for protection. The latest agreement between the EU and Turkey — which declared Turkey a 'safe country' to which all asylum-seekers should be returned without the possibility to apply for asylum in Europe — is just an extreme example of a trend that has in the past month seen governments say that they would only let people of certain nationalities cross their border to seek protection or that they would only accept Christians for resettlement.

The policies of treating people from different countries differently also have concrete consequences on how people coexist in refugee camps. Imagine what tensions it causes when in one facility, Syrians are allowed to start integration courses right away, but Afghanis have to wait until their asylum claim is approved. People are thrust into animosities, and when conflicts happen, these are ascribed to religious hatred or cultural incompatibility when it is really our policies that directly fuel division.

I think of an Afghani man who told me with tears in his eyes that he remembers only war in his country — the various conflicts there have simply gone on his whole life. It is very dangerous when children grow up and know that being a fighter is the most accessible 'occupation' and that guns are how most people solve their problems.

In the emergency housing that I coordinated last year in Germany, we tried very consciously to build a culture of peace. For example, I had a conversation with boys and their parents about playing with toy guns in the hallways, and we would agree that it brings bad memories for many people and makes boys think that violence is a normal option for solving conflicts — and that neither of those things is healthy. That, in fact, these same families risked their lives to get away exactly from these things.

The experiences of generations of people living in conflict zones must be approached sensitively, without labeling people as 'damaged' or automatically assuming that everyone is 'traumatized.' But at the same time, making available resources that help everyone — the newcomers and the communities receiving them — to understand the impact of war and to heal it. 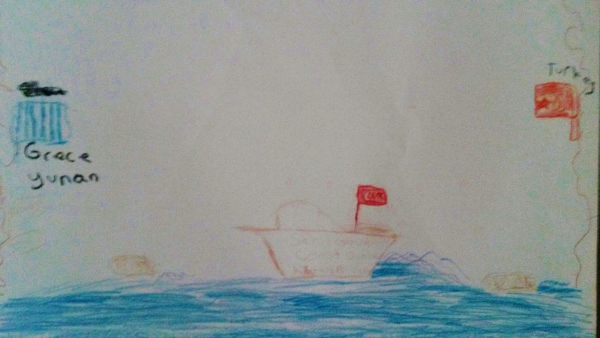 A picture drawn by a Syrian child who lives at the emergency shelter of the Sisters of the Holy Redeemer in Würzburg, Germany. The picture shows the family's passage by boat from Turkey to Greece. (Provided photo)

In your work and the work of others in sisters and Catholic networks, what sustains you spiritually? What examples do you have that keep you going?

I very consciously ground my work in prayer, both as a starting point of my every day and as a 'holding place' for all the people and stories that I encounter. I feel that I get glimpses of the worst and the best in humanity, and so often I have encountered amazing examples of resilience, selflessness or forgiveness that have been transforming for me. I am always inspired by people who may have lost everything, but their first impulse is to ask, 'How can I help others?'

I always look for ways to reinforce that we are dealing with people, not cases or numbers. I consciously try to be a bridge-builder, and I have seen the power of helping people to care for each other and build up a community — even if just temporarily. Because even if it lasts just for a couple of weeks and then the person has to move on, these couple of weeks tell someone that he or she matters even after they lost everything that previously might have marked their identity and, sometimes just as importantly, that he or she is also still capable of caring for others. It brings me immense joy when I hear people say they feel safe, they feel heard or that they feel human again. That's the biggest compliment and makes it all worth it.

Of course, Pope Francis has been a wonderful encouragement for our work. It is great to see that the pope brings ministry with displaced people to the center of attention of the church. It is no longer a marginal ministry for a few 'adventurers,' but a mission for all of us. And it is wonderful to see that people hear this call and that for some of them, it awakes a new curiosity about what else might be changing in the church and whether maybe it is becoming a place to which they would want to return.

Ministry | Q & A with Petra Dankova, working with today's refugees

Poverty and drought: When a sister goes among the people in India, lives change