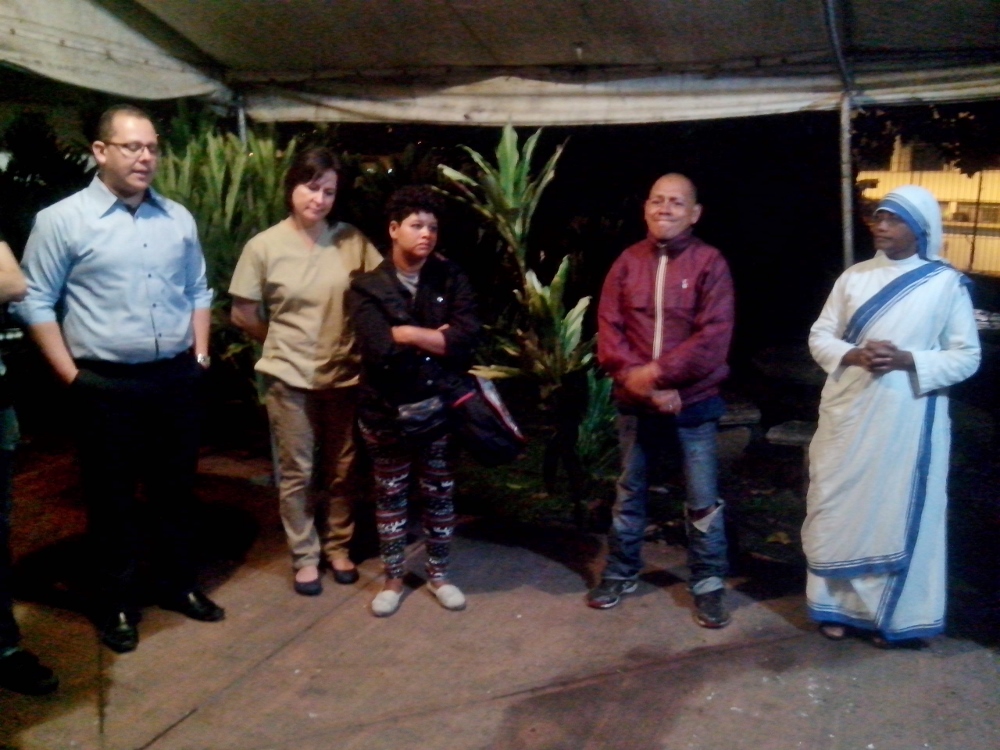 Coronado, Costa Rica — Sister Marinus, an Indian woman religious whose order is devoted to aiding "the poorest of the poor," is a firm believer that God's presence and love are powerful tools in her daily effort to save the souls of people in need.

Headquartered in Coronado, Costa Rica, about 15 miles northeast of the nation's capital of San José, Sister Marinus leads the humanitarian work she and 11 other sisters of Mother Teresa's Missionaries of Charity undertake in Costa Rica, specifically in San José and surrounding areas as well the eastern province of Limón, which stretches north-south from the border with Nicaragua to the boundary with Panama and contains the country's Caribbean coast.

The capital's northwestern suburban neighborhoods of Los Cuadros and Los Colochos, where seven of the sisters, including Sister Marinus, focus some of their work, are a part of a particularly violent area, where local gangs are engaged in a drug-related territorial war. Limón shows some of the country's most critical economic and social indicators: Poverty is around 33 percent, above the national average, which is just below 24 percent.

Global Sisters Report spoke with Sister Marinus to learn firsthand about her interaction with people living in downtown San José and to inquire how she and the other members of the order keep their faith strong.

GSR: In carrying out your humanitarian mission, you are, on a daily basis, in the midst of extreme poverty. How do you maintain your faith?

Sister Marinus: For us, it is quite easy because of our charism. We have found and were taught and we have lived that among all this, God is there. God is there, present, and he's testing for each one's weaknesses, each one's troubles. God asks you to do something for them. It helps our faith and to exercise our faith, and many times we have experienced, personally, that it is Christ in them.

In what ways is God present?

People always have God above them. God is present in their suffering and their loneliness. He is looking for that comfort and charism from us.

Do they feel that? Do you somehow convey that to them?

Yes, they know, because many times, we tell them, 'You're a child of God. Whatever you've done, God loves you unconditionally.'

How do they react to that?

They feel very happy because they know that God loves them. At times, we say, 'God bless you, God loves you.' Just to hear a 'God loves you,' they feel it, that love of God, through somebody who cares.

In what ways do you feel that you can guide them to a better life?

Many times, we experience the fruit [of our work]. We have many people who have come out from drugs [or from] prostitution. They have recovered, they have come back, and they are in better families. We have helped some of them, and today, they have work.

I don't say that we have fruit all the time, but, yes, we have seen the fruit, that people can come out, and they can become a better person.

Does this happen often?

I don't say very often, but, as the mother [Mother Teresa] used to tell us, even one soul is very important. We don't work just because we want to see the fruit. Surely, our hope is that, but even when it does not work out, [it is important] for us to manifest that God loves them. We may not change their whole life, but sooner or later, they know that God loves them, and that love will motivate them to change their life.

In the case of poor families in neighborhoods where violence prevails, what is your main aim?

To know their condition. Also, to let them know that we accompany them in their joys and sorrows. You see, we work with them not only to help them materially but, through that material help, also to make them know how God cares for them, how God is present in all their troubles, in their difficulties.

We give them hope and we give them the courage to go ahead, because many mothers are without a husband and with five, six children. We try to help them in whatever way, materially, we can help, but, more than that, let them know that we are with them, walking in their life.

What problems do you basically find there?

They have no papá, they have no father, so the mother is at the same time a father and mother. They have no work, many times. Children are without food, many of them without sacraments; they don't even go to school. They don't even have a house. Many times, we have to help them rent the house. Many families, they come to our house every 15 days or once a month to receive foodstuffs so they have something to eat.

There is much need in the families, but at the same time, they know somebody is there for them, to listen. Somebody is always there with whom they can share.

Do you find that violence is the main problem there?

Yes, violence, but also family problems. There is no family background. You can imagine a mother without a father. She's working, so many times, children are by themselves. So we can say there is no family foundation.

How do you deal with the gang problem in Los Cuadros and Los Colochos?

They don't make problems with us. They just see us. 'Hola madre' ['Hello, mother'], they say. We really don't enter so much [into conversation] with them. We have nothing to do with them.

[George Rodriguez is a freelance writer based in Costa Rica.]

Working group urges UN to step up the fight against homelessness

'Call the Midwife' is a celebration of life