Q & A with Sr. Carol Keehan 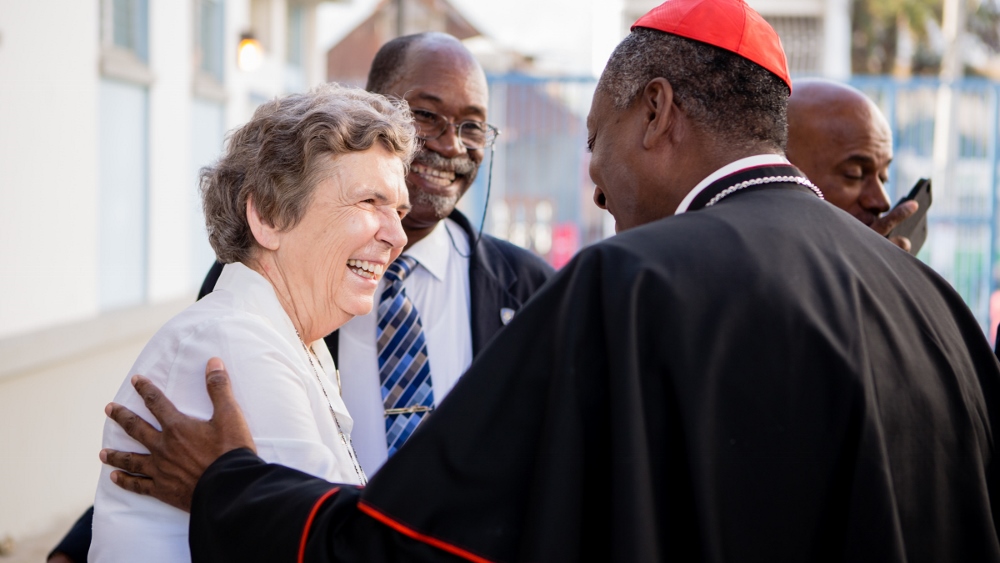 It has been just over five years since the devastating 7.0 earthquake in Haiti destroyed St. Francis de Sales Hospital in Port-au-Prince, Haiti. More than 70 people died in the hospital that day. In response, Catholic Relief Services (CRS), Catholic Health Association (CHA), the Archdiocese of Port-au-Prince and others collaborated to rebuild the hospital that is set to re-open. The new St. Francis de Sales Hospital is one of the first public buildings to be completed in the Haitian capital where reconstruction has been slow.

The 200-bed, 125,000-square-foot hospital was dedicated Jan. 15 and is owned and governed by the archdiocese. For over 100 years, St. Francis de Sales Hospital has been the principal health care provider for the poorest and most vulnerable people of the Haitian capital.

CHA and its members raised more than $10.1 million to contribute to CRS for the project. CRS funded and supervised the construction of the new hospital, which will also serve as a teaching facility for doctors, nurses and other staff. Global Sisters Report recently spoke on the phone and via email with Daughter of Charity Sr. Carol Keehan, who serves as the CEO of Catholic Health Association.

The Holy Father told the attendees at the conference that the rebuilding of Haiti rests on three solid pillars: the human person, ecclesial communion and the local church. He said that there can be no true rebuilding of a country without also rebuilding each person in his or her totality.

What were other key take-aways from the Vatican meeting?

It was encouraging to hear about the efforts of church agencies and Catholic charitable organizations from the U.S. and Europe in rebuilding churches, schools and a Catholic hospital – St. Francis de Sales Hospital. We have seen so much in the press about the lack of progress in rebuilding after the earthquake, but in fact, as Carolyn Woo [CRS president / CEO] noted at the conference, the money spent by the Catholic Church in Haiti has been effective.

You also got to meet Pope Francis. What was that like?

This was the second time I have met with Pope Francis, and both meetings have been thrilling for me. I have such high respect and admiration for the Holy Father. It is a blessing to be in his presence.

From Rome you flew directly to Haiti for the dedication of the new St. Francis de Sales Hospital. Catholic Health Association and its members raised over $10 million to help rebuild this critically important facility. Is the first time CHA and its members undertook such a major fundraising event for such a cause?

In 1990, after the fall of the Ceaușescu regime in Romania, the world was confronted with the horror of abandoned, disabled children who had been, in effect, warehoused in inhumane conditions. CHA members responded generously then, raising $2 million to fund an orphanage in Cluj, the second most populous city in the country.

Are you surprised by the generosity of the CHA members and other donors in response to the disastrous earthquake five years ago?

Not surprised, but so gratified by the generosity of our members following the earthquake in Haiti. I need to point out that our fundraising campaign for St. Francis de Sales Hospital occurred in 2011, while our member organizations were still dealing with the financial setbacks from the great recession. I think it’s obvious that their contributions were motivated by their compassionate mission to heal and care for those most in need.

The devastating earthquake in Haiti seemed to break open an unprecedented collaboration among faith-based organizations and the local church that enabled the new hospital to be built. CHA, CRS, Archbishop Guire Poulard and the archdiocese and Sur Futuro Foundation, all worked together on rebuilding St. Francis de Sales Hospital. How did this collaboration came to be and why has it been so successful?

When the Holy Father said that the rebuilding of Haiti required “ecclesial communion,” he affirmed the collaboration and cooperation that we have experienced with CRS and the Archdiocese of Port-au-Prince. I was privileged to serve on the board of CRS, and I have known for many years about the fine work done by CRS around the globe.

Following the 2010 earthquake in Port-au-Prince, CRS approached CHA to identify some technical advisors from our membership who could help in planning the rebuilding of the hospital.

I must credit Robert Stanek, a former chair of our CHA board, who became passionately committed to raising funds to support the hospital reconstruction. Bob reached out to health system CEOs across our membership, and together they raised the $10.1 million in record time.

Over the past four years, we have worked to build and strengthen our relationship with the leadership the Archdiocese of Port-au-Prince, Archbishop Poulard, Bishop Glandas Marie Erik Toussant, auxiliary bishop of the Archdiocese of Port-au-Prince, and others. This has been a wonderful journey for all of us; we have learned from the Haitians just as we have given of our resources and expertise. 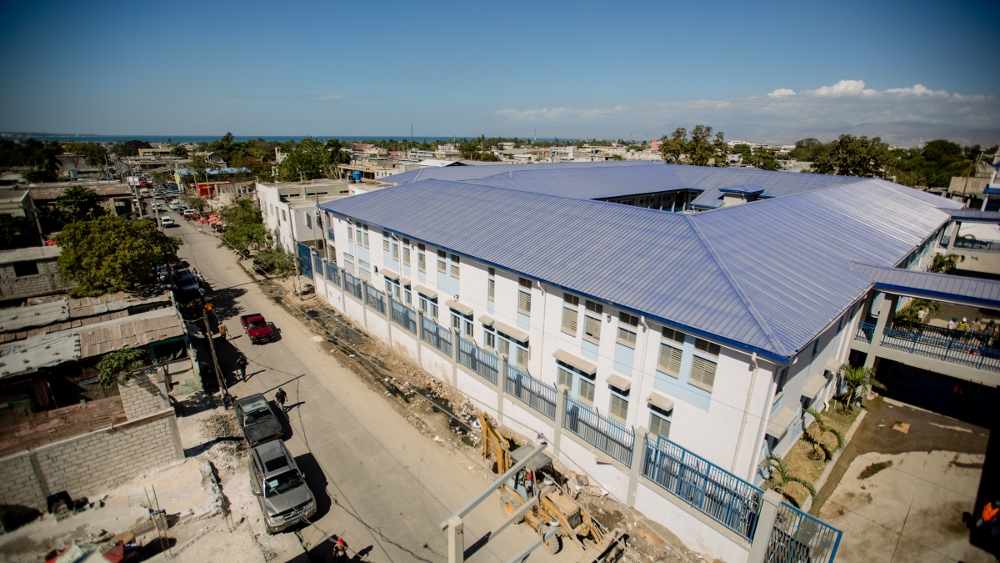 Going forward, besides the building itself, St. Francis de Sales Hospital is going to be a more integrated healthcare in the community and offer additional education for the medical and nursing staff.

The new hospital offers great opportunities for the education of physicians and nurses and other health care workers. The archdiocese is in negotiations with the University of Notre Dame de Haiti regarding the hospital as a clinical education site for the medical and nursing schools. Of course, we are very supportive of that possibility. The hospital administration, and in particular, Dr. Wilfred Cadet, the hospital’s chief operating officer, have promising long-range plans for adding services such as cardiac care and dialysis.

As you reflect on this unique and important collaboration, can you identify some top characteristics that have been critical to the success of effort during the past five years?

First is the generosity of the U.S. Catholic health care organizations that are members of CHA and that donated $10.1 million to rebuild the hospital. I also want to recognize one of our staff people at CHA, Bruce Compton, senior director for international outreach, who came to CHA with experience living and working in Haiti. His knowledge of the country, its language and its people proved invaluable once we got involved with the hospital reconstruction. The most important characteristic, however, was the strength of the relationships we have developed with CRS and the Archdiocese of Port-au-Prince. For the past few years, since beginning this project, we have hosted clergy from the archdiocese at several CHA events, including our annual Catholic Health Assembly. We’ve gotten to know the hospital leaders, Bishop Glandas and Dr. Cadet, and I believe we have earned their trust.

What does the rebuilding of St. Francis de Sales Hospital say about the people of Haiti, the doctors, nurses and the staff and about the local church and its leadership?

This new hospital is a dramatic sign to the people of Port-au-Prince and all of Haiti of the commitment of the Catholic church to stand in solidarity and to care for them. Like all Catholic health ministry, St. Francis de Sales is sacramental, in that the care and healing that will take place there will be a sign of God’s grace in our world.

Given the death toll and destruction caused by the earthquake, how moving was the dedication of the new hospital for all those connected to it and for you personally?

I visited Port-au-Prince and the site of the destroyed hospital several months after the earthquake, and I stood at the edge of the rubble of a six-story patient tower building that collapsed, floor on floor pancaked. It was heartbreaking. You could see in the rubble, pediatric beds and bassinets amidst the broken concrete. About 70 people lost their lives at the hospital on January 12, 2010. To be back at the site and see this modern, new facility was very emotional. I felt many things: pride, gratitude and a sense of honor for those who died there.

Our hospitals serve many functions in the communities where they serve. Obviously, they provide the health care services that are needed. But often, they are also major employers in their communities, contributing to the economic health of their regions. For the Catholic church, as I said earlier, Catholic hospitals have an evangelizing function; they are sacramental, revealing God’s grace in our world. And in some communities across the country, Catholic hospitals are the only presence of the church there.

Surely, it is your hope and expectation that St. Francis de Sales Hospital will provide such a multi-dimensional presence in Port-au-Prince for another 100 years. What needs to happen in the days, months and years ahead to increase the likelihood that it happens?

We are committed to continuing to journey with St. Francis de Sales in the near future as the hospital becomes operational. We stand ready to assist the hospital leadership with whatever technical expertise is helpful to ensure quality health care services for our brothers and sisters in Haiti. 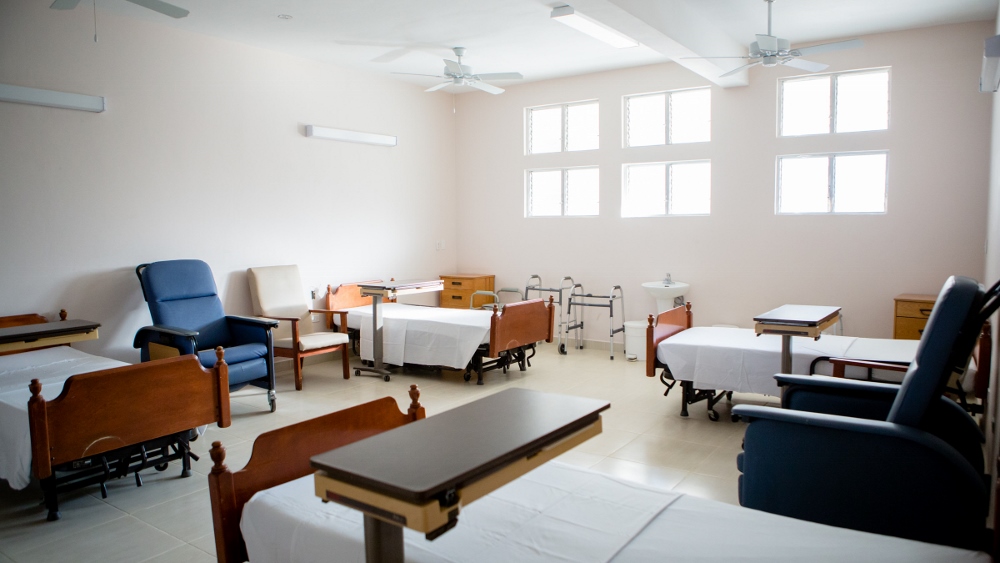 A four-bed ward at the newly rebuilt St. Francis de Sales Hospital in Port-au-Prince, Haiti. The 200-bed hospital has both private and semi-private rooms. (© The Catholic Health Association)

Read Pope Francis’ address to the participants at the Vatican meeting on Haiti, January 10, 2015.

[Tom Gallagher is a regular contributor to the NCR and lead writer for the newspaper's Mission Management column.]

Q & A with Petra Dankova, working with today's refugees

Our lives are mission: Sisters reflect on Pope Francis' call to holiness