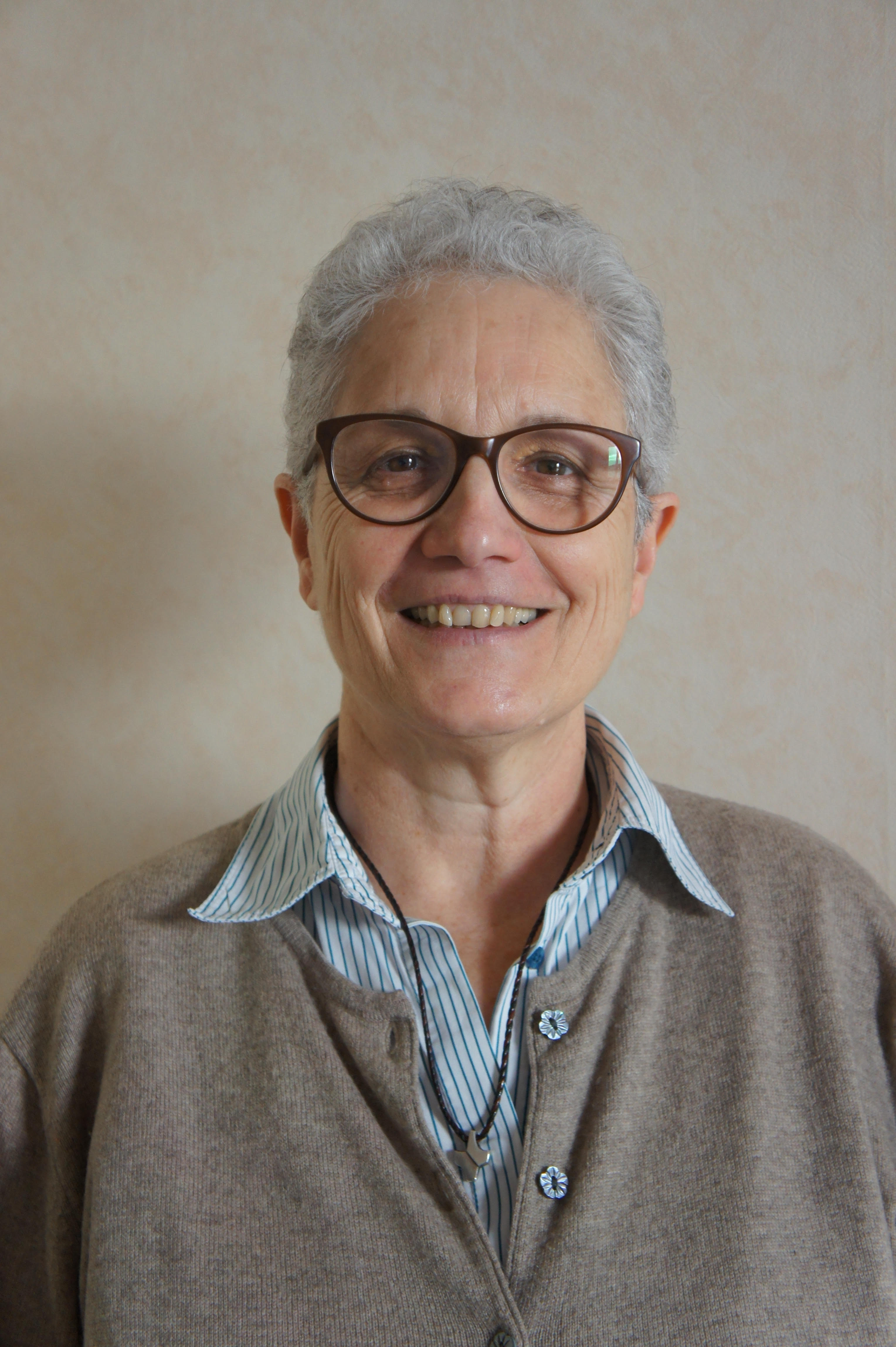 Paris, France — Sr. Colette Hamza, a Sister of St. Francis Xavier, lives close to Marseille, France's second-largest city, on the Mediterranean Sea, where a quarter of the population is Muslim.

Hamza, a trained history teacher, is now a professor of Islamic studies at the Institut Catholique de la Méditerranée (Catholic Institute of the Mediterranean) and was, until recently, in charge of Christian-Muslim relations for the Archdiocese of Marseille. Once a week, she goes to a Catholic elementary school in Marseille's rundown northern neighborhoods to talk about religion.

She told GSR how important it is for children to learn about different faiths.

GSR: Your father was Algerian and Muslim; your mother, French and Catholic. Did this give you a special understanding for both communities?

Hamza: I was brought up Catholic in Marseille in a bourgeois neighborhood. I like to say that I have always tried to make Colette, my Christian name, dialogue with Hamza, my family's Arabic name, and I certainly felt I had to build bridges between the two communities. My order, the Sisters of St. Francis Xavier, sends us to create links with those who are the furthest away from the church. I spent most of my life as a teacher in the south of France.

Why do Muslim families send their children to a Catholic school?

Muslim parents tell us they choose a Catholic school because they know their children will be better looked after and educated than in the local public one and because they will be told about God.

The building is located in the heart of some very difficult neighborhoods in the northern part of the city, where unemployment is very high and families struggle to make a living. Because of large subsidies from the state, fees are very low and families can afford to send their children. 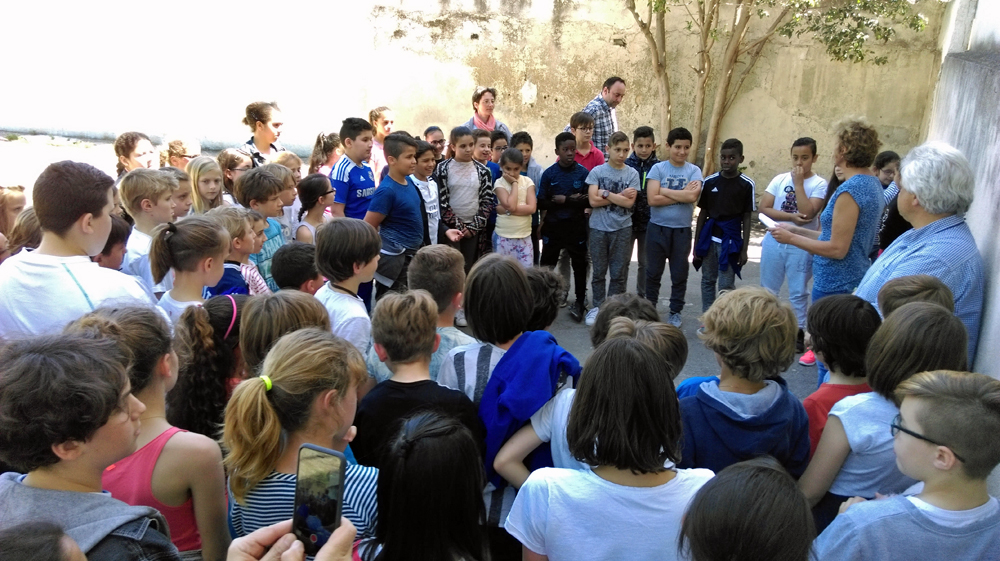 Children at Notre Dame Saint Théodore, a Catholic preschool and elementary school in Marseille, France, where the majority of students are Muslim. (Provided photo)

How is the presence of Catholics seen in these districts?

I have been coming to that school for eight years, and everybody knows me. They are aware it is a Catholic school. When some parents ask us to serve only halal food for lunch, food prepared according to Muslim regulations, we tell them they are free not to eat all the food given for lunch.

Of course, we adjust our menus, giving them more fish, for example, but it remains a Catholic school that does not have to follow Islamic rules. Just like boys, girls have to go to the swimming pool to learn to swim. Parents who object may, of course, find ways to avoid it.

A Catholic school with 98 percent Muslim children is still surprising for some Christians. What do you say to those who would like the school reserved mostly for Christian children?

In this part of the city, most families are Muslim. If we took in only Christian children, nobody would attend the school!

This, by the way, raises the question of meeting other children, non-Muslims. We talk about Christmas, Easter. I explain the birth of Jesus. They see that Jesus is mentioned as a prophet in the Quran, they find out that Mary is Myriam. Mary is a very popular figure for Muslims. 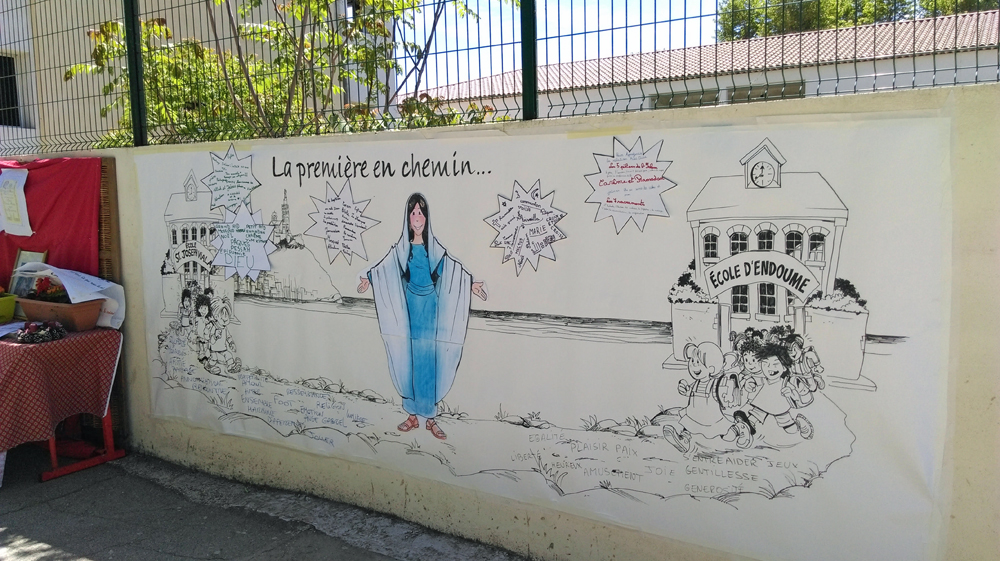 A mural of Mary with children at Notre Dame Saint Théodore, a Catholic preschool and elementary school in Marseille, France, where the majority of students are Muslim. (Provided photo)

We compare what is written in the Quran to what the Gospel says, for example, with the narrative of the Annunciation. We discuss; we do not judge. We respect the other person's religion.

I remember once a child stated with confidence, 'Christians will all go to hell.'

Do you pray with the children?

No. We talk, we have discussions, but we do not pray. One time, though, one Muslim girl recited a prayer in Arabic in front of the class, then one of the few Christian students, a child from an African family, said the Our Father.

'For me, God puts me back on my feet because he loves me,' said another.

I remember once asking a class of 8-year-olds what Jesus' job was. I expected them to answer that he was a carpenter. But one said, 'God's job is to save people.' I certainly see the work of the Holy Spirit when I hear the children's answers to my questions!

Two Catholic schools, one in a good district, another in the northern one, St. Mauront, thought it would be a good idea for children to meet children their age from another neighborhood. One meeting took place at the school with mainly Christian children in the center of Marseille, the other in the school in the rundown district in the north of the city.

The children quickly got to talking and playing together. Both groups admitted they learned a lot of things. Some Christian children even said, 'They were rather well-dressed for Muslims!'

Slowly, step by step, we contribute to a better understanding between Muslims and Christians. Catholic schools have to ask the question of the meaning of life. 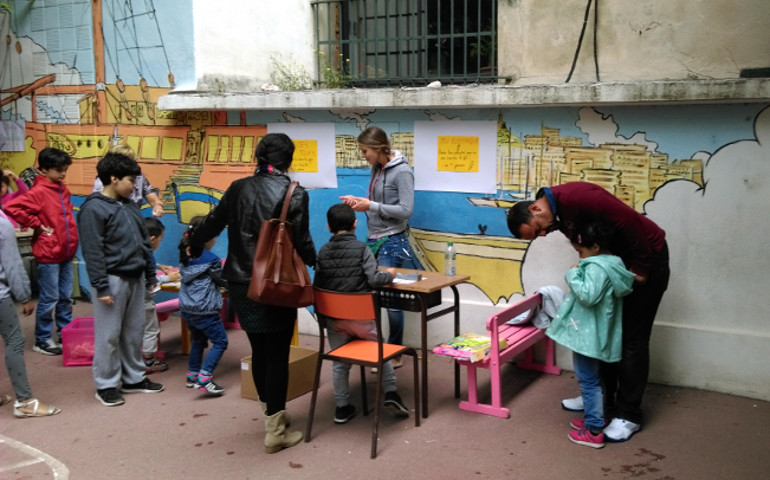 Children at Notre Dame Saint Théodore, a Catholic preschool and elementary school in Marseille, France, where the majority of students are Muslim. (Provided photo)

Are there other opportunities for Christians and Muslims to meet and talk?

In the wake of the terrorist attacks where 17 people were killed in January 2015, the institute where I teach organized a debate with a priest, an imam and a rabbi. The theme of the event was 'In the name of God.' The attendance was huge, bigger than usual.

There are also several groups who meet regularly and talk about religion, social issues, life in the city. Three years ago, I set up a discussion group with imams and priests. We meet regularly. I am the only woman, and they say with a smile that they have no problem with me leading the discussion! Several groups of Muslim and Christian women meet to know each other better.

How do Christians and Muslims get to know each other's religion?

We have organized visits of mosques and churches with an imam and a priest. The local authorities also asked us to organize visits of churches, mosques and synagogues as part of an opportunity to discover the city's cultural heritage. French authorities prefer to talk about culture rather than religion because they would like to see religion restricted to the private sphere.

We have to fight a lot of prejudice on both sides. The terror attacks committed in the name of Islam certainly did a lot of harm to Muslims. But let us remember that all over the world, most victims of terrorism are Muslims. Muslims living in France should not have to pay for crimes committed by extremists.

Since we live in times of enormous changes and political uncertainty, some Catholics as well as some Muslims feel insecure. They do not know how to talk to their children about their faith. Some people see in other religions and cultures a threat to theirs. It is more important than ever to continue a dialogue to promote peace.

Ministry | Q & A with Sr. Colette Hamza, building bridges between Christians and Muslims