When St. Anthony of Padua Sr. Estela Buet visits the local prison in Mercedes, Argentina, every week, she is living out a mission she's felt called to her whole life — one that Buet said is also inherent to her order.

The order's founder, Mother Antonia Cerini, visited Mercedes' prisons when they were first constructed in 1866, and its patron, St. Anthony of Padua, helped prisoners in northern Italy who were bound to debt, working with those whom they owed.

Buet began her consecrated life working in education, hoping she'd someday be assigned to work and live among the impoverished.

"You know, when you're young and dream about helping the poor? Well, back in the '70s, I was very much influenced by that decade, and I dreamt of living in the villas — the slums — working with them firsthand," she said. "It was always my idea to work with the poor. After I professed, my congregation told me I was needed in the schools, so I dedicated 40 years to working in education, but that desire never really left me."

After watching the movie "Dead Man Walking," in which Susan Sarandon plays Helen Prejean, a St. Joseph sister who serves as a spiritual adviser to a man on death row (played by Sean Penn), Buet was inspired to visit a local prisoner who was condemned for life. She saw him go through trial after trial until he was eventually released in 2000.

It was then that her calling began to crystallize.

Buet: The sisters and I invited him into our home for a while because he had nowhere to go after prison, and that became our next mission: dealing with the question of community, of employment. Right now, we work both inside and outside the prisons. We consider the town a prison in the sense that there are inevitables who are in danger of this future, families who already have someone in prison, the penitentiary and judicial system. At the center of all that is the prison. It's a broad mission.

There's an organized Argentine prison ministry, but we have a network in other countries to help guide ourselves, though all our work is in Argentina, particularly here in Mercedes. Ours is the oldest prison in the province of Buenos Aires, which has about 60 prisons, totally saturated with prisoners. Ours in Mercedes, for example, has a capacity for 300 to 400 people and yet holds about 800.

GSR: What does your work within the prison look like?

I go every Wednesday. We have ecumenical Bible studies, mainly with those who are Baptist, evangelical, Catholic, whatever. All are welcome. Sometimes I go with somebody, but I most often go alone. I haven't been able to get a committed partner to come with me.

I often wish I were able to record the conversations. They're experiencing such difficult times, so they have a lot of things to reflect on — and a lot of time on their hands for reflection — so we try to make those positive reflections rather than, say, time spent plotting another assault [laughs].

They come from incredibly impoverished families. We did a study here in Mercedes and found that the prisoners are all from the most marginalized barrios of the city. And those who aren't from Mercedes, their families have that additional expense of coming all the way here to visit their imprisoned family member, whether it's buying the bus ticket or paying for food that day. We try to help them with that.

How about your work outside the prison?

We try to maintain a dialogue surrounding the penitentiary system. We always say the ministry should work with those on both sides of the door.

In 2011, in this house, we hosted a meeting for those in prison ministry, and a judge had attended and talked about his worries and experiences from his point of view. He said how great it would be if we could organize ourselves and help those who are released from prison. So we started organizing ourselves and in 2012 formed an NGO, Nostros te Acompanamos — 'We Accompany You.'

Because a person who is released from prison is a person who is often released totally alone, with no options. They have nowhere to go and have no help. They have a lot of psychological needs, too, such as a fear of coming across their old life on the streets after being away for so many years. They have that fear of crossing the police, that they'll look at them suspiciously just because they've been imprisoned before — which may be unfair of the police, but I understand their logic, too.

I remember when we worked with a youth who had just been released, the whole barrio reacted like, 'Yikes, that guy's been in prison.' They come out already being marked, in a way, even if they've been released for innocence, which was the case for one young man we helped. We just want them not to feel alone, whether it's helping them acquire the psych help they may need, or a letter of recommendation for a job, whatever, until they have steady footing.

Accompaniment is crucial for them when they're recently released, because in Argentina — and especially in the province of Buenos Aires — there's high recidivism. This March, we're hoping to host courses that the Labor Ministry offers regarding technical training, such as construction, and as an NGO, we would administer those courses within the prison. Those who complete those courses earn a certificate that is meant to help them orient themselves once they're released. They've also given us a chunk of land so that we can begin constructing homes for those newly released from prison. Some don't have one at all and are forced to begin reconstructing with nothing.

We're trying to keep the Mercedes community from closing themselves off from these realities. The tribunals, with the police and all, are located in this town, so it's very like our town to have to deal with the realities of a prison because it's all located here.

What are your conversations with the prisoners like, since the attendees come from a variety of religions?

Everything is based on the Bible because the Bible unites all Christians. One opens the Bible, starts reading and is immediately taken to today's realities. It's amazing. So we always end up reflecting and having dialogues of real life, making connections and what God is telling us, what we can learn.

They seem to appreciate the roundtable format. They say it's like their moment of freedom, where they are free to express their thoughts, their desires. We may get into political arguments, but that aside, they speak very freely over coffee or another beverage. They've truly helped me, personally, in my own religious life.

Is there any one subject or topic that particularly lights them up?

Family is always on their mind. But it's more of a worry. And I've noticed over time that the makeup of the prisoners has changed. They used to be older, but now the overwhelming majority is so young. So when it comes to subject matter, it's all about family.

And when it comes to the youth, I'd say their addictions are very apparent. Some have little ability to make comments or contribute or are incapable of learning something as basic as the alphabet. That's a worry of mine. But within the prison, elementary education is offered, as is high school and higher learning, so that anyone who wants to rehabilitate himself has the resources to do so. And we've had people change and start their lives over — stories that either move you or frustrate you. But some situations catch your attention more than others.

What are some misconceptions surrounding the imprisoned?

Something that happened the other day that comes to mind: We had a meeting with various representatives from the prison ministry network, and someone was there on behalf of Caritas. And just after I talked about the need to accompany those who are released, she said, 'You know what happens? Those who work in Caritas are afraid, and when [those released from prison] come to us for help, our people are terrified of them.'

Fear is embedded in society. In Argentina's case, houses have just as much fencing as the prisons because there is simply so much fear, a fear based on what we see happen to our neighbors on a daily basis. And those who come out of prison are conscious of that; they're aware that everyone is afraid. So we must accompany them so that they can grow as individuals and not feel like prisoners even outside the prison.

Sisters can be scared, too. And we try to talk each other down by explaining, 'No, this guy's good; I've known him for a while now.' But then a new guy comes, and of course you might be like, 'Well, now what about this guy?' So it can be hard. It's a process that slowly works itself out, perhaps meal by meal, trying to ease any worries. And the parents of the children who attend the school across the street — they're scared, too, even if they work in the judicial system.

It's amazing how rampant fear can be, but they're mere prejudices that you have to change, though slowly. I don't doubt that this is a universal feeling. But never has it been like this in the province of Buenos Aires before.

In this house, we're not afraid. On our patio, we have a refrigerator that's open all day for those who need food. People bring food in their car, drop it off, and move along, and not long after, you'll notice that it's gone, like someone was anxiously waiting for food.

How has this work changed you personally?

This makes me see life and its social aspects from the other side, another angle, the angle of those who are left out of the system, who have their difficulties and make you wonder where it went wrong. They all have their stories that make me value what I have much more. Being with them and helping their families from the outside changed my perspective on life.

It all makes you think about the world you live in. It's truly a world I never knew about. In my former world, it's like there were no prisoners — maybe just a drunk that cops had to deal with. But we had no awareness of this world.

The Holy Spirit is the constant advocate, the drive. We always talk about the Holy Spirit with the guys, that it's what gives them strength, and you hear them ask it for patience, and for help to avoid violent urges. Above all, when someone needs direction, when it feels like all the doors have been shut to you, it's the Spirit.

In our ministry we talk about the Trinity often. Jesus is the light, the path; the Father is who cares for and protects us; and the Holy Spirit is the strength, the drive. And they're very channeled into the Spirit. 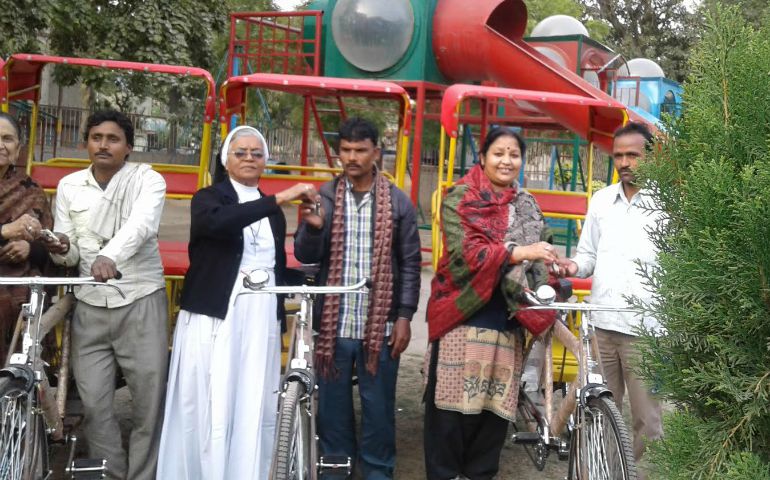 Sr. Celine Arikkat, a member of the Franciscan Clarist Congregation, hands over a rickshaw to a migrant earlier this year. Arikkat has organized three-wheel-cycle-cab drivers in Noida, a satellite town of New Delhi. (Rita Joseph) 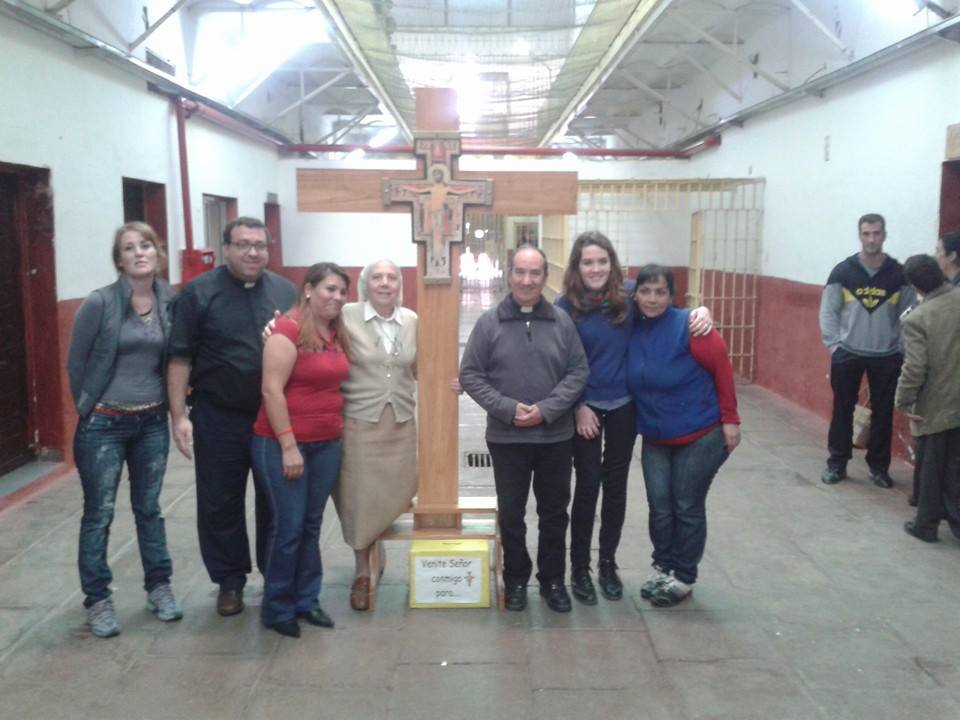 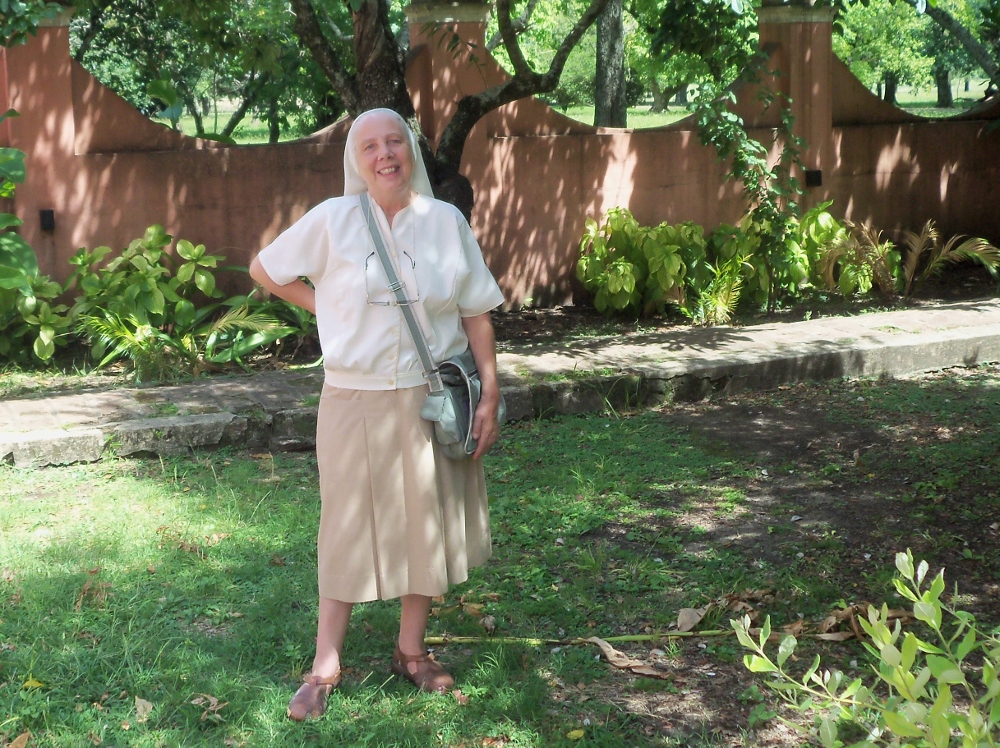