Sr. Helen Prejean asked the students a direct question: If in some way you're not engaged in resisting state-sponsored execution, can you be said to be complicit in the person's death?

An activist against the death penalty, Prejean is best known as the author of "Dead Man Walking," an account of her friendship with a death-row inmate who was executed in Louisiana that was made into an Academy Award-winning movie.

The Sister of St. Joseph gave a luncheon presentation to small groups of students from Juan Diego and Judge Memorial Catholic high schools and Westminster College.

She was in Salt Lake City to speak at Westminster as part of the private's school's Tanner-McMurrin Lecture Series.

Drawing the students in with questions and telling stories about her own experiences, Prejean gave disturbing details about the death penalty issue, such as the fact that when convicted murderer Jesse Tafero was executed in Florida in 1990, the electric chair malfunctioned and flames shot out of his head.

"I heard Jesse's mother the next night in the church saying, 'I thought burning at the stake ended with Joan of Arc,'" said Sister Prejean, who was in Salt Lake City March 24.

She then described the death of Clayton Lockett, convicted of murder, rape and kidnapping, who was executed last year in Oklahoma using a lethal injection of an untested drug mixture. He was "writhing and gasping for 45 minutes," Prejean said, beginning a discussion on what constitutes torture, and moving from there into the concept of culpability.

In the states where the death penalty is still carried out, governors defend the law as the will of the people. Therefore, individual citizens must consider whether they bear some responsibility for the deaths of those executed, "because we are a democracy, and what happens in our name we're responsible for," she said, noting that the "homicide" is listed as cause of death on the death certificate for a person who has been executed.

While she objects to the death penalty on moral grounds, she also pointed out that the overwhelming percentage of those on death row are poor, are people of color and are convicted of killing a white person. Another criticism is that hundreds of those convicted have later been found not guilty, she pointed out.

"We live in society at a time when things are happening, and some of the things that are happening are wrong," she said. "Your job is first to learn, and then, secondly, to see what your gifts are and where you're going to put your gifts to be an active citizen and not a passive person like flotsam and jetsam, just pulled along on a current."

"When you get involved in something really big where you're working for social justice, you come alive in a way . . . you never would have," she continued. "It's not that it's not going to be hard, and at times overwhelming . . . [but] we are made to do something big in our lives."

Utah recently became the only state to bring back the firing squad as a method of execution.

On April 29, the U.S. Supreme Court will hear oral arguments on whether the lethal injection protocol used in Oklahoma is constitutional.

In her lecture at Westminster College, Prejean said Americans must confront their deep-seated ambivalence toward the death penalty.

For example, while five guns are used for a firing squad, only four have bullets, so none of those who pull the trigger can state for certainty that he or she was an executioner.

"Why don't we shoulder up to it and say, 'Yeah, we believe in killing people for their crime, so let's do it'? Isn't in honorable? Why do we have to hide the execution; why do we put a blank in one of the guns?" Prejean asked, noting that when the execution is by lethal injection, alcohol is swabbed on the convicted person's arm before the IV is inserted.

"Germ-free death," she said, mocking the procedure. "At least Utah's more honest: You're going to bring the firing squad, and blood is going to drip to the bottom of that chair when the person is shot to death.

"You put a little red velvet heart on the person, strap him in the chair with five guns lined up, and then shoot him and kill him. This isn't happening in India or Africa, this is happening in our state, and it's being done in our name."

The death penalty issue involves more than just those sentenced to death, Prejean said. Others who suffer are the victims' families, the members of the jury who hear the case and the prison staff involved in the execution.

"But we're far removed from it. We don't see it. We hear about it. It doesn't touch most of us personally," she said. "I've been crisscrossing the nation for 25 years talking to people, and most of them go, 'I didn't know it was like that!'"

[Marie Mischel is editor of the Intermountain Catholic, newspaper of the Diocese of Salt Lake City.]

Related - No point in adding more death by Dan Stockman 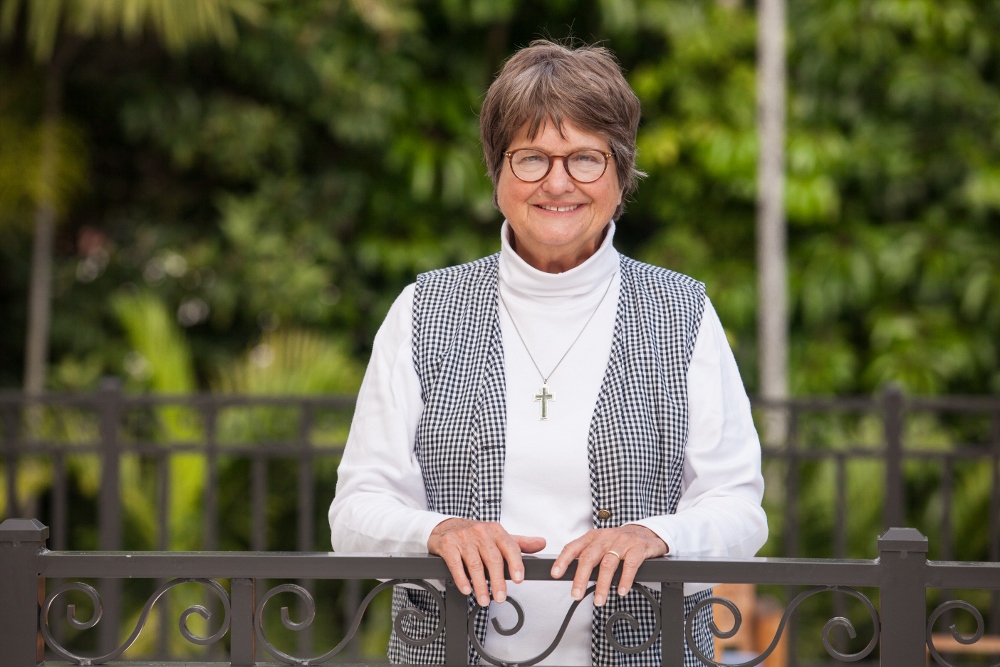