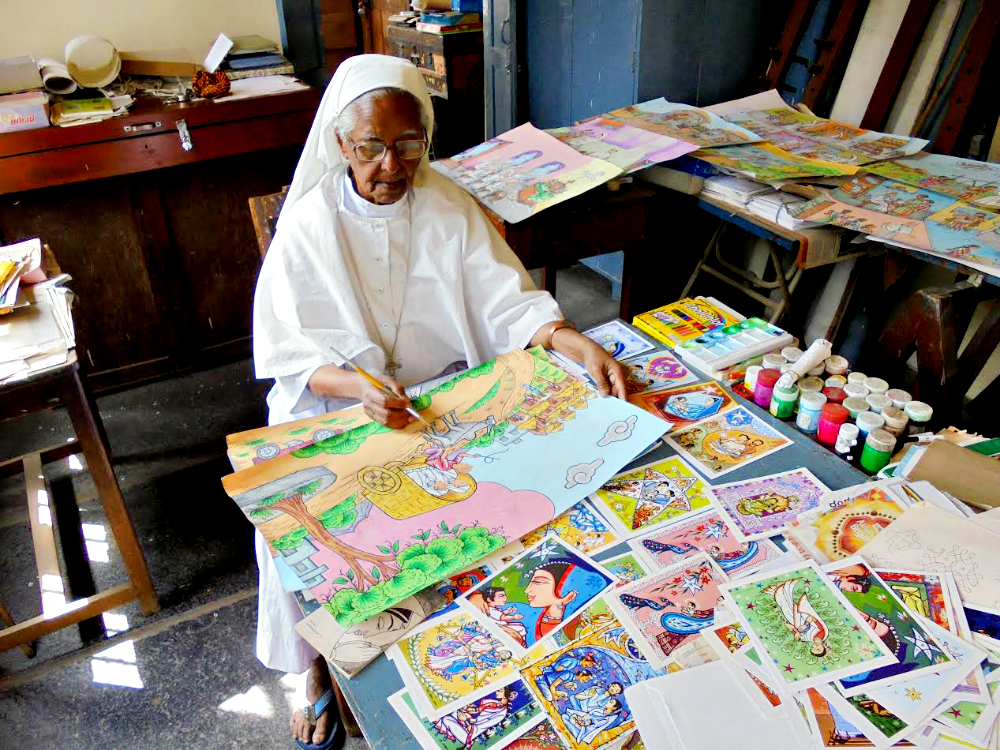 Sister Marie Claire with her paintings at the convent of the Salesian Missionaries of Mary Immaculate in Bengaluru, India (Philip Mathew)

Bangalore, India — Sister Marie Claire is a Hindu convert who joined the Salesian Missionaries of Mary Immaculate (SMMI) when she was 17 and running away from an arranged marriage. Pope Benedict XVI had hailed the now-80-year-old nun as a church artist: He was greatly impressed with her painting on the passion of Jesus Christ.

"Other people use words or social work to improve the lot of humanity. I use my art in order to help people to discover God's presence in them," said the nun, who has done more than 1,000 paintings depicting the images and stories from the New Testament. The nun, who prefers to be called Sister Claire, is considered the senior-most Christian artist in India.

Her paintings reflect the messages of Jesus Christ and the church's mission in India. They also express her faith in God.

Pope John Paul II was impressed when some of her paintings were presented to him by Sr. Jane Scaria, the first Indian superior general of the Salesian Missionaries of Mary Immaculate. The paintings are kept at the Vatican archives and exhibited at the Vatican Museums.

"God is the greatest artist, and I am only a miniature, who continues his job in a simple way," Sister Claire has been quoted as saying.

She shared with Global Sisters Report about her life and mission toward the end of 2016.

GSR: What motivated you to become a Catholic nun?

Claire: I was born in an upper-caste Hindu family in Tirupati [a town in the southern Indian state of Andhra Pradesh]. During my childhood, I was attracted to a spiritual way of life. My father worked in the Indian railways, and he was transferred frequently to different places in Andhra Pradesh and neighboring Karnataka state. My mother and my eight siblings and I also moved with him wherever he was transferred.

When he was transferred to Bangalore [now called Bengaluru, capital of Karnataka], I was sent to a Christian school, where my never-ending love for Jesus began. My pious Hindu parents tried to stop me from following this path by fixing an early marriage.

But I was determined to follow the path of a religious life and renunciation. At the age of 17, I escaped from my home in Tirupati three days before the marriage and reached Bangalore, where I took refuge at the St. Mary's Convent run by the SMMI sisters. I was familiar with the convent as it was located next to the school where I studied.

Later, watching a film on Christ's suffering and love moved me deeply, and it became a turning point in my life. I felt Jesus had a special message for me and wished me to become a Christian and join the convent. With a special permission from Archbishop Thomas Pothakamuri, then archbishop of Bangalore, I got baptized and joined the SMMI at the age of 18. I have been living in this convent ever since I came here in distress at the age of 17. 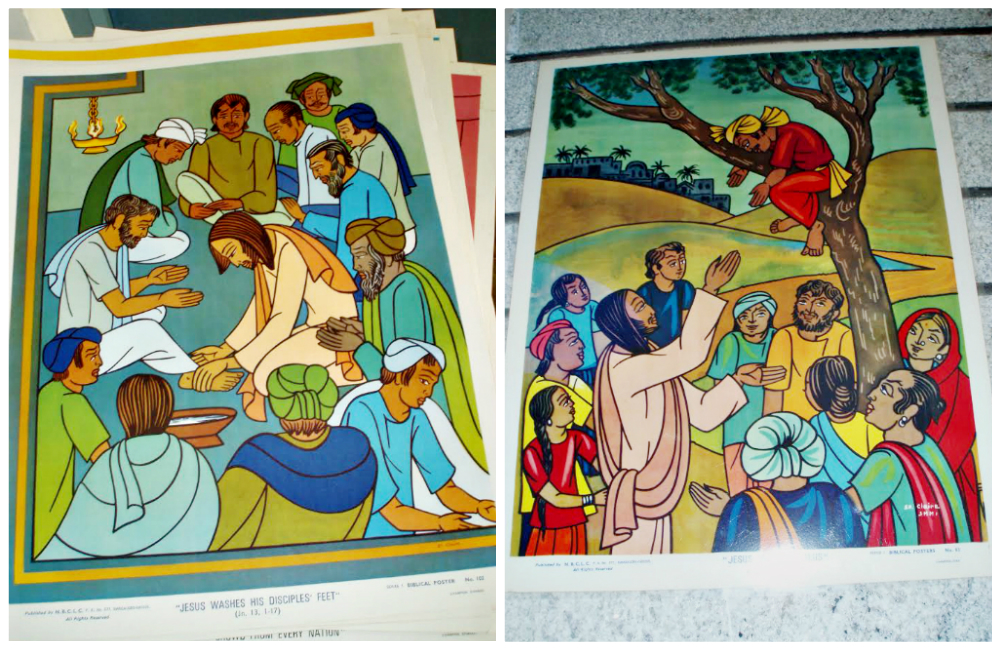 What was your life before becoming a nun?

My parents named me Meera, the name of a saint who was a beloved of Lord Krishna [a popular Hindu deity].

In the early days of my life in Tirupati, I found myself drifting toward the Buddha and his teachings. I found solace in the simple ways of life. I also used to meet many sanyasi [Hindu religious monks]. Those days, I also toyed with the idea of going to the Himalayas to spend my life in prayer, silence and solitude. I grew up in a religiously charged atmosphere, which made me spiritually enriched to be transformed to a fertile ground to grow in our Lord Jesus' garden.

How did you become an artist?

My mother was my first inspiration to become an artist. Whenever there was a festival or celebration, my mother drew rangoli. [Rangoli is a South Asian art form in which patterns are created on the floor, in living rooms or courtyards, using materials such as colored rice, dry flour, colored sand or flower petals. It is usually done during Hindu religious festivals, mainly to welcome God and guests to the house.]

I used to admire it. After becoming a nun, my desire was rekindled by my superiors. I was trained as a teacher. But a major sickness prevented me from continuing it. During those days in the convent, there was a French sister who was a well-known Christian artist, Sister Genevieve. When my superior saw some painting talent in me, she encouraged me to follow in Sister Genevieve's footsteps. So the congregation sent me for formal training to the State Art School, where I got first rank in the examinations. During the course, I was selected as an outstanding student because of my distinct and unique folk-art style that came naturally to me. At the end of the course, I earned an Art Master Golden Diploma from the art school. 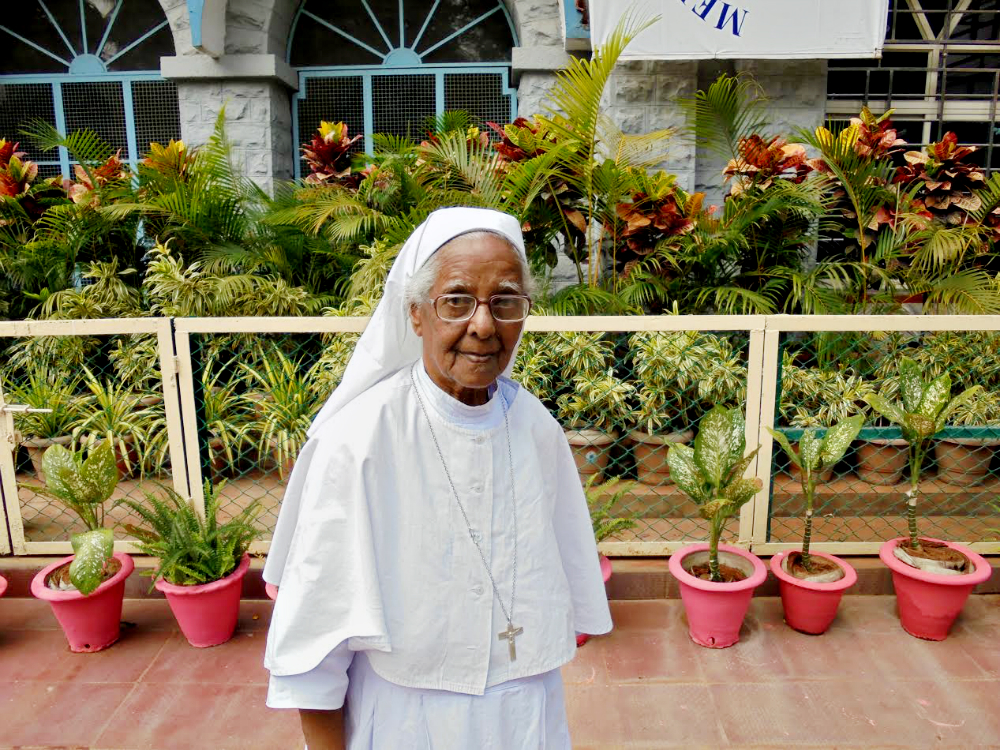 When did you realize you wanted to be an artist?

The desire to be an artist began to develop in me when I was 8 or 9 years old.

What type of painting technique you use?

I use watercolor, enamel paints, posture colors, color pens. I believe these are very useful for the drawings and paintings.

What is the main focus of your paintings?

My art is Christian imagery, which is rooted in the Indian soil, penetrating its culture, and drawing inspiration from the life of the common people in the country. Biblical images are depicted through an Indian eye, using Indian symbols, motifs, images, themes and elements. My paintings can be grouped as devotional, contemplative and inspirational. 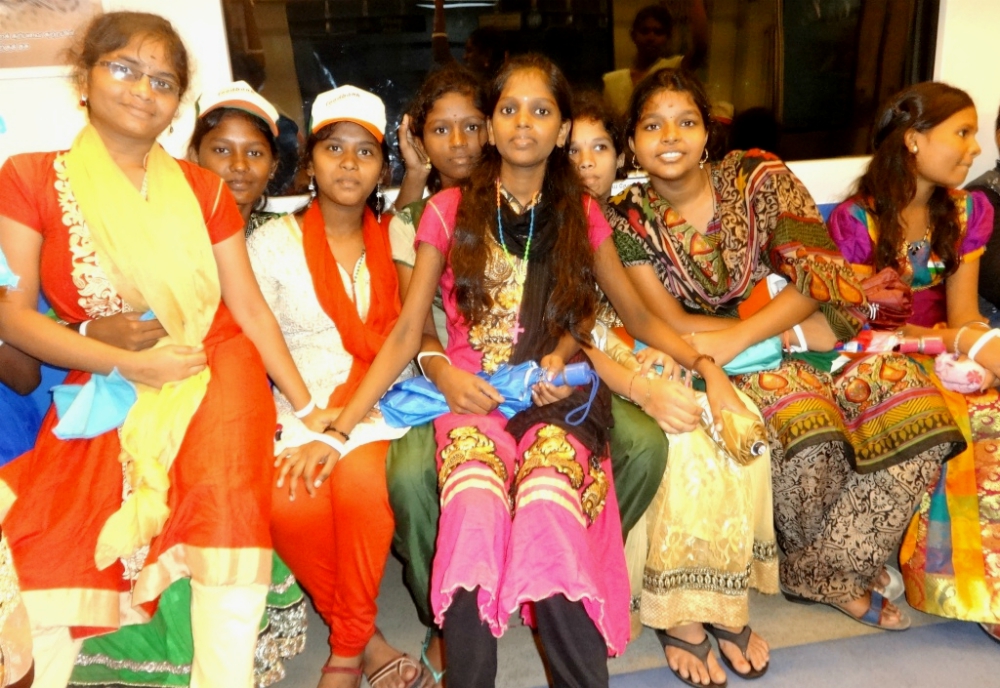 How much time do you take normally to complete a painting?

It depends on the painting. When I paint on plywood, it takes about two months to complete.

How many paintings have you done so far?

I have done more than 1,000 paintings, 500 Christmas and Easter cards, and many postcards, posters and book illustrations. Most of my paintings are going to be exhibited at a museum to be opened soon by my congregation at the St. Mary's Convent in Bengaluru.

Do you get a sense of satisfaction after completing a painting?

When I start to do a painting, it is a struggle for me. I feel happy and thankful to God after I complete it.

What are some of the characteristics of your paintings?

My painting tries to represent the message of simplicity, powerful expression, lighter themes, Indianized and rustic representations of Indian life.

Do you think church is doing enough to support and promote Christian art?

The church leaders have loved my art. They have bought them and made use of them for so many purposes. Pope Benedict XVI has bought my paintings for his personal use. Once he invited me to felicitate me at the Vatican. Due to some health and personal reasons, I couldn't make it. 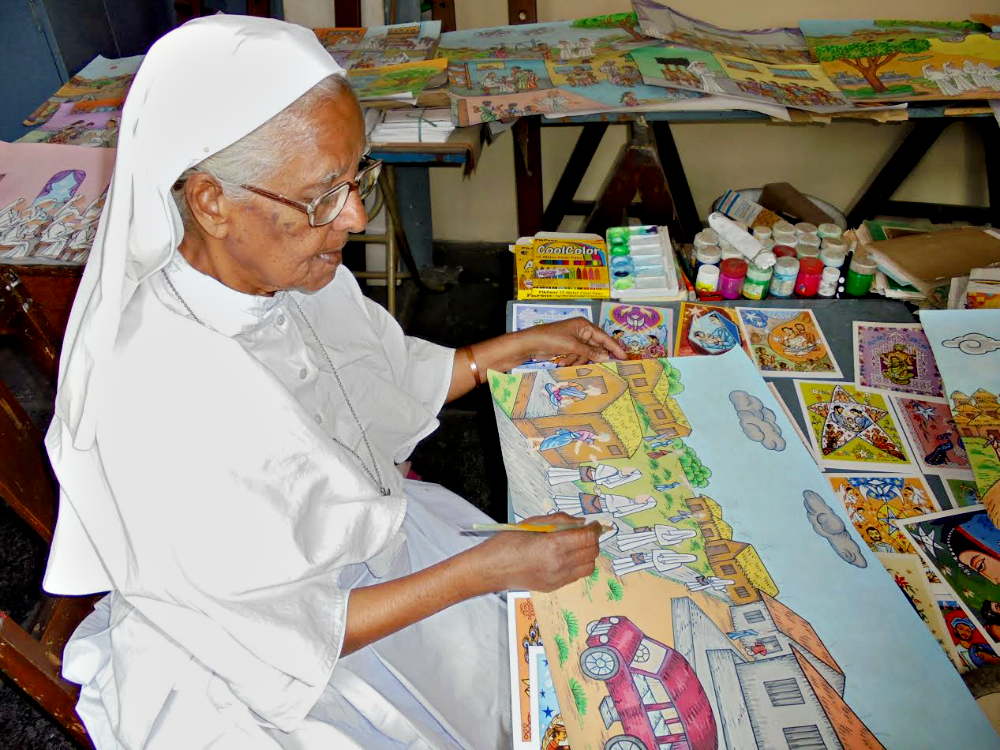 Sister Marie Claire works on a painting at the convent of the Salesian Missionaries of Mary Immaculate in Bengaluru. (Philip Mathew)

Has your congregation been supportive of your work?

Where do you get your inspiration from?

My inspiration mostly comes from silence, solitude, prayer and meditation. Also, I feel inspired when I look at the beauty of creation. I am also inspired by reading books.

Any new paintings in the offing?

I am now working on a few greeting/Christmas cards and a few paintings for the upcoming museum.

What challenges have you faced in your art ministry?

To me, art is a challenge. I resolve all challenges and problems by prayer. 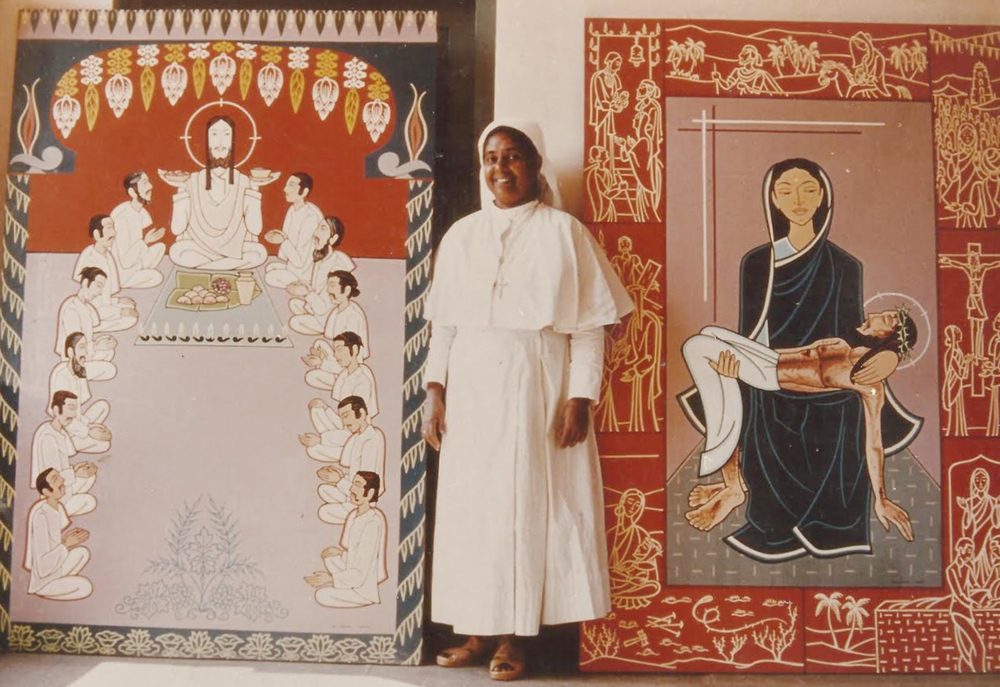 In an undated personal photo, Sister Marie Claire poses with two of her paintings, displayed at Mother of Sorrows Church in the southwestern Indian coastal town of Udupi. (Provided photo)

Where are your paintings exhibited?

My paintings have been exhibited in churches, art galleries and museums in India and abroad, including in the Vatican and Germany. They have received showers of accolades from art lovers, friends and well-wishers, including the late Pope John Paul II and Pope Benedict XVI. The St. Joseph's Seminary in Mangalore, in Karnataka state, has chosen my paintings as the backdrop of its main altar. Sister Genevieve and I have painted on wood a very large altar piece that depicts the scenes of the life of Christ and the life of Jesuits in India for the retreat house of the Jesuits in Goa [a western Indian state].

What are the awards and prizes you have received?

I have received a lifetime achievement award [Assisi Art Award] in 2012, comprising a citation and cash, instituted by the Catholic Bishops' Conference of India. 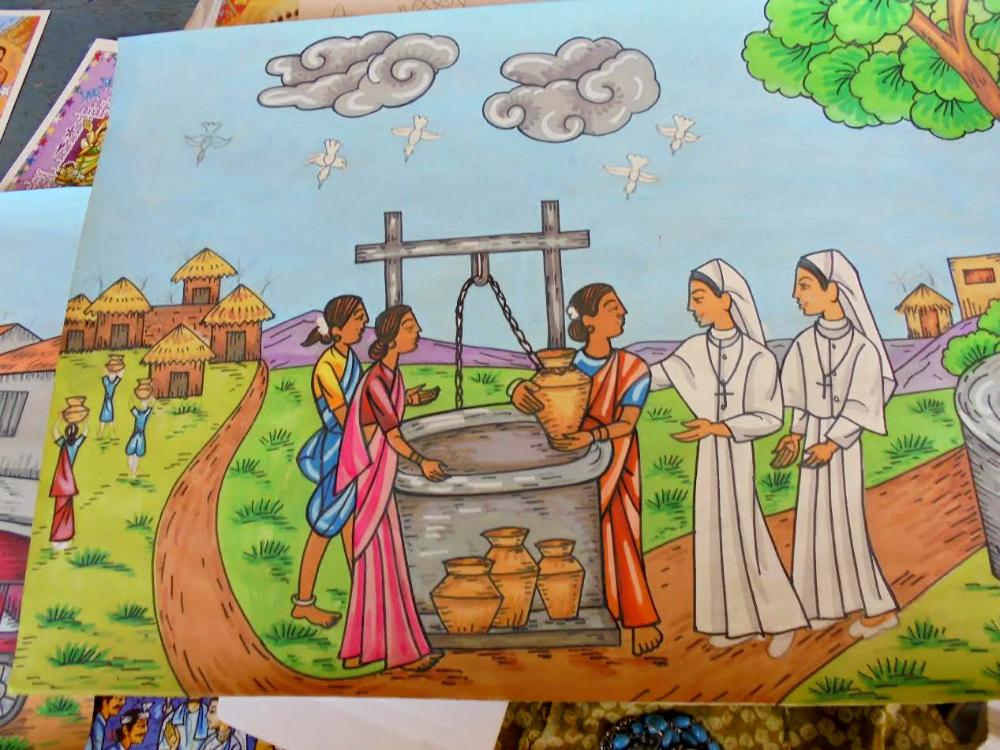 What keeps you busy these days?

I am trying to give some last-minute touch-ups to a few of my paintings. Currently, I am also helping the congregation to set up the art museum at the convent. The art museum will display the paintings of Sister Genevieve and me.

[Philip Mathew is a journalist based in Bangalore, southern India. This article is part of an ongoing collaboration between GSR and Matters India, a news portal that focuses on religious and social issues.]

Ministry | Q & A with Sr. Marie Claire, impressing popes with her paintings