In 1996 Sr. Mary Consolata Bui Thi Bong was a pioneer in joining hands with local followers of Buddhism, Protestantism and Cao Dai, a syncretic belief system founded in Vietnam, to serve people living with HIV/AIDS through a project funded by Norway-based Nordic Assistance to Vietnam (NAV).

Now local Catholics and Buddhists still cooperate with one another on giving material and spiritual support to people with HIV/AIDS.

Sr. Bong, former superior of Daughters of Our Lady of Immaculate Conception based in the central Hue City, also established the Catholic Committee on HIV/AIDS Prevention and the Charity Clinic of Kim Long that provides free health care for poor people including people with HIV/AIDS from central provinces of Quang Binh, Quang Tri and Thua Thien Hue.

She took her final vows in 1969 and became a general practitioner in 1976.

In the Asia-Pacific region, Vietnam ranks fifth in HIV/AIDS cases, with 220,000 people living with HIV/AIDS and 10,000 new cases per year. Most people are infected with the disease through prostitution and drug abuse.

So, how did you feel as you started to work with people with HIV/AIDS?

When the AIDS epidemic struck in central provinces in 1996, NAV invited me to join its project, Provoking Religions’ Reactions to HIV/AIDS Epidemic in Hue City. At first I felt afraid of being infected with HIV while working with patients. I prayed, thought of my mission as a nun and doctor, and remembered God’s word saying, “For whoever wants to save their life will lose it, but whoever loses their life for me will save it.” (Lk 9:24).

Then I took up its invitation and have been involved in HIV/AIDS activities ever since. I set up the Catholic Committee on HIV/AIDS Prevention so as to draw people to prevent the deadly epidemic.

I also encourage nuns from the congregation to serve patients as well as they serve Jesus Christ.

What has the committee undertaken?

At first we trained Catholic scouts on basic HIV/AIDS knowledge and sent them to educate parishioners in cities and villages about the disease, so as to reduce discrimination against HIV/AIDS patients. Those volunteers have also been taught health care skills to look after 120 patients at their homes.

On weekends we bring flowers and ‘chao,’ a gruel made by boiling rice and meat or fish in water that is good for sick people, to patients at the public hospitals.

When patients die, we visit, lay them in coffins and hold their funerals according to their faiths.

On Christmas, Easter and festivals such as Mid-Autumn, Lunar New Year and Children’s Day, we gather patients, give them gifts and meals and organize football and kite competitions, lion dances, camps and picnics at the beach for patients and their children.

Their children are provided with scholarships and studying aids.

Those patients in good health are trained to take care of people in poor health at their homes.

In 1996 we were only a group of three nuns and now the committee includes a chaplain, six nuns, 22 volunteers and 20 people with HIV/AIDS serving patients at hospitals and homes.

Also, how do you cooperate with people of other faiths in HIV/AIDS prevention?

We are thankful for the project to afford opportunities to meet and work with followers of other faiths, especially Buddhist monks and nuns and build interfaith cooperation in serving all people. Followers of the two religions outnumber those of other faiths in the province.

Catholic and Buddhist workers divide Thua Thien Hue province into two parts, and each group finds people with HIV/AIDS in their area then looks after them and brings them food. Both groups meet every three months to share their experiences and discuss the situation of people living with HIV/AIDS, the discrimination they face and lack of health care services for them, and the increasing spread of HIV in communities.

We work together to hold funerals for dead people, too.

What do you learn from Buddhist volunteers?

Both of the groups learn interfaith solidarity from one another. We spend weekends serving patients at hospitals. We share joys, sorrows and difficulties in working with patients, and we support one another spiritually. Buddhist nuns teach us, Catholic nuns, how to practice Zen or meditation.

Both groups still work with one another although the project officially ended in 2010.

I am sure patients enjoy the results of all their hard work.

In my view, religious workers serve patients wholeheartedly and creatively, and are highly respected by people, who listen to and do what they say.

How do you do to maintain HIV prevention activities?

There are still some 200 people with HIV/AIDS alive in the province after the project ended in 2010. So I appealed to Misereor, the German Catholic Bishops’ Organization for Development Cooperation, and got its approval in 2012.

Thanks to Misereor’s support, we give patients $500-$1,000 each to raise cows, pigs and poultry for a living. Their children are offered bicycles and scholarships, too.

We continue to educate ethnic groups and people in remote areas on HIV knowledge to increase educational and awareness efforts within communities. 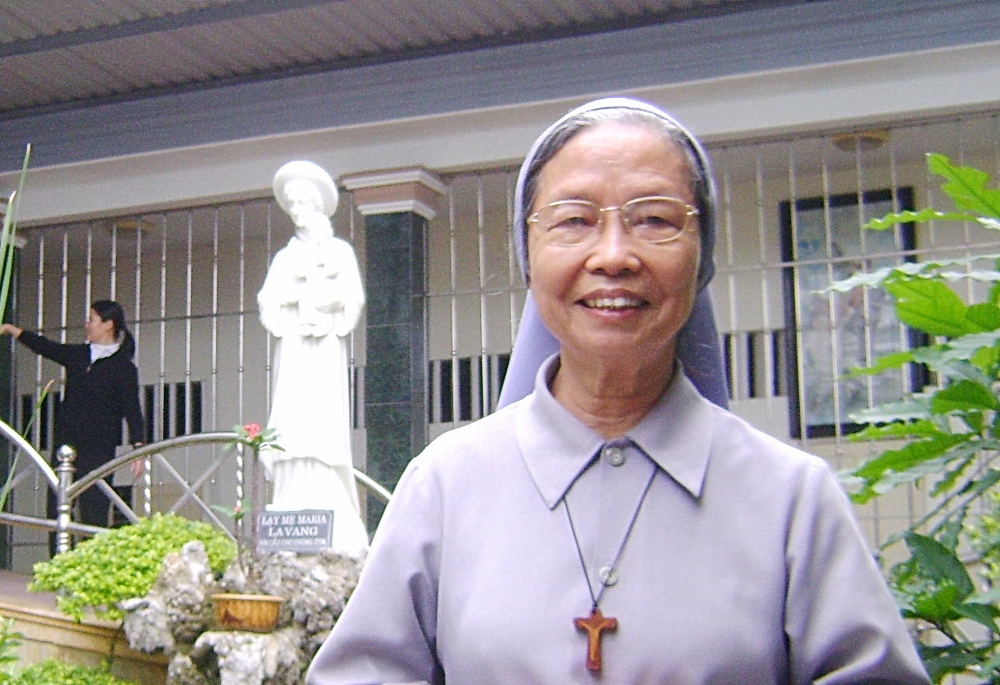 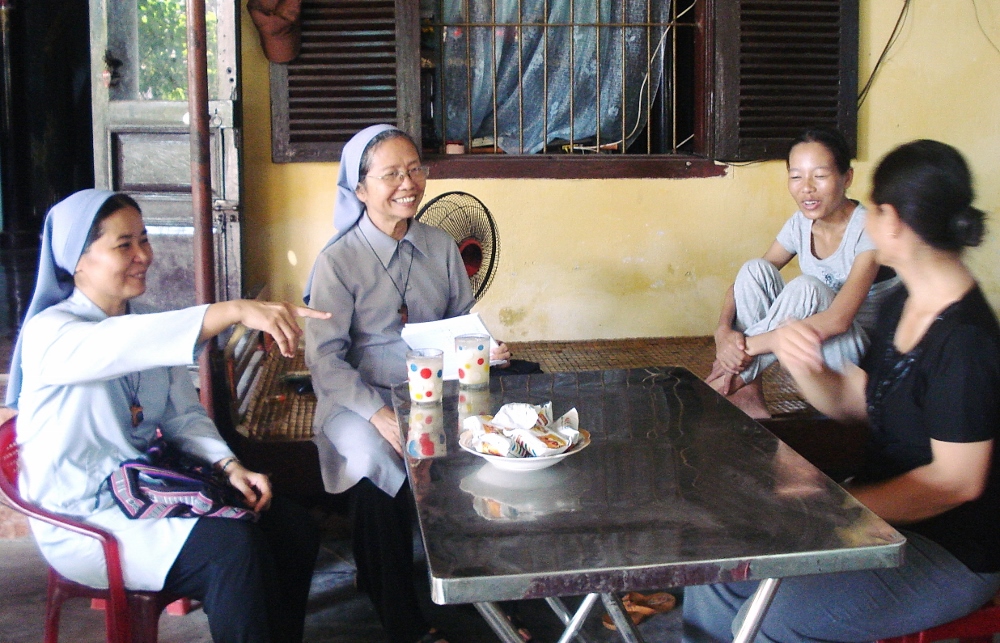 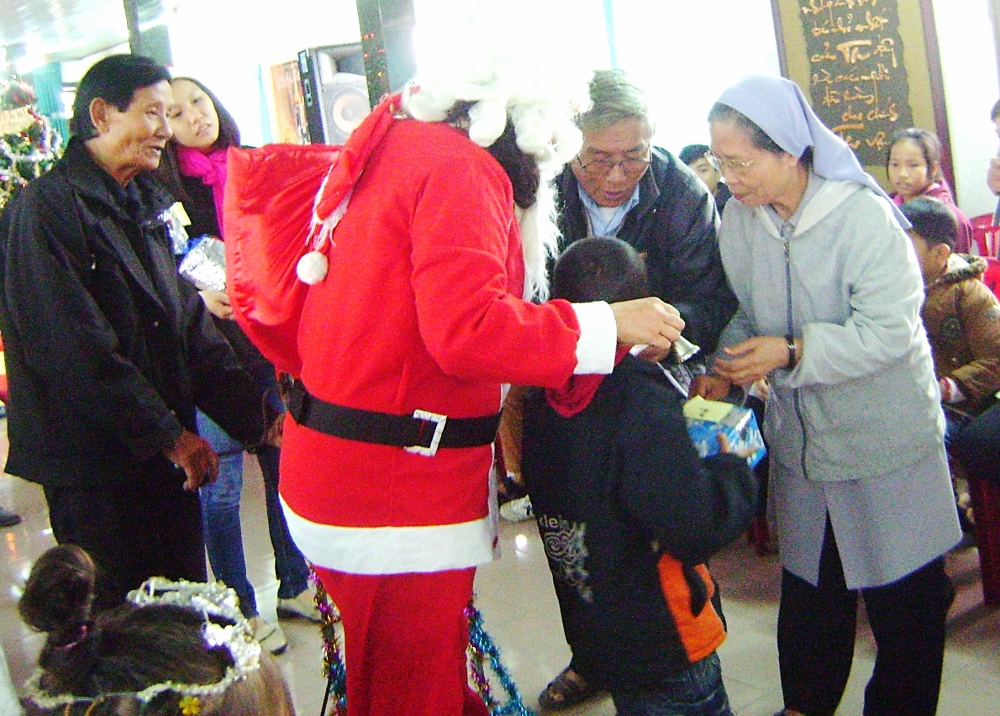 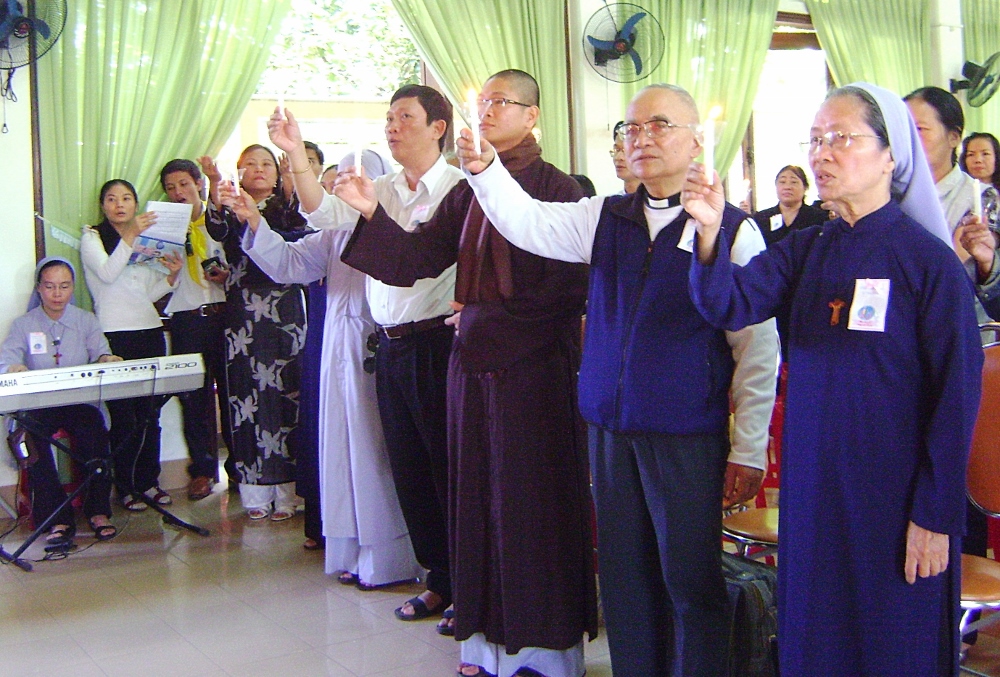