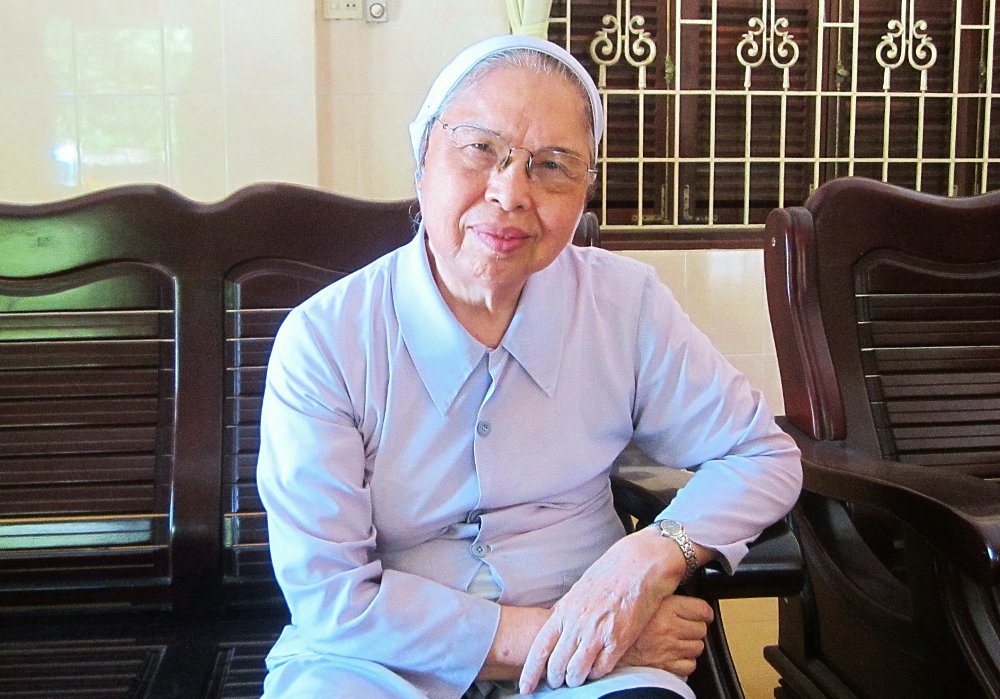 Tho has served as director of Son Ca Center for orphans and children with physical disabilities based in Hue City, central Vietnam, since 1991 when she got government permission to reopen the center. She asked for funds from foreign benefactors and built new facilities that now freely house 65 children served by four sisters and 10 workers.

After the end of the Vietnam War in 1975, the communist government confiscated an old orphanage run by the Sisters of Saint Paul de Chartres and has used it as a hospital.

After finishing her studies in France and returning to Vietnam in 1967, Tho taught French at a church-run high school. After communists reunified the country in 1975 and closed or confiscated all religious facilities, she took charge of charitable work until she started her service at the center in 1991.

Tho recently talked with Global Sisters Report about her ministry.

GSR: Why are you involved in children’s ministry?

Tho: After our center was closed and orphans were forced to leave the center, we continued to quietly bring up 30 orphans who had no relatives at our convents. They and the nuns cultivated vegetables and fruits, raised poultry, produced rice alcohol and made leaf hats for a living. We had to sell pieces of furniture and used items to buy food. Some orphan girls now are becoming nuns.

Finding many orphans living on streets and getting no public care, we petitioned government authorities to reopen the center to look after orphans and got their permission in 1991. We annually admit a dozen street kids, orphans and those who are abandoned by their parents and are from poor families. Some babies are left in dustbins on streets and at the gate of our convent. Others suffered physical disabilities caused by toxic chemicals in wars. 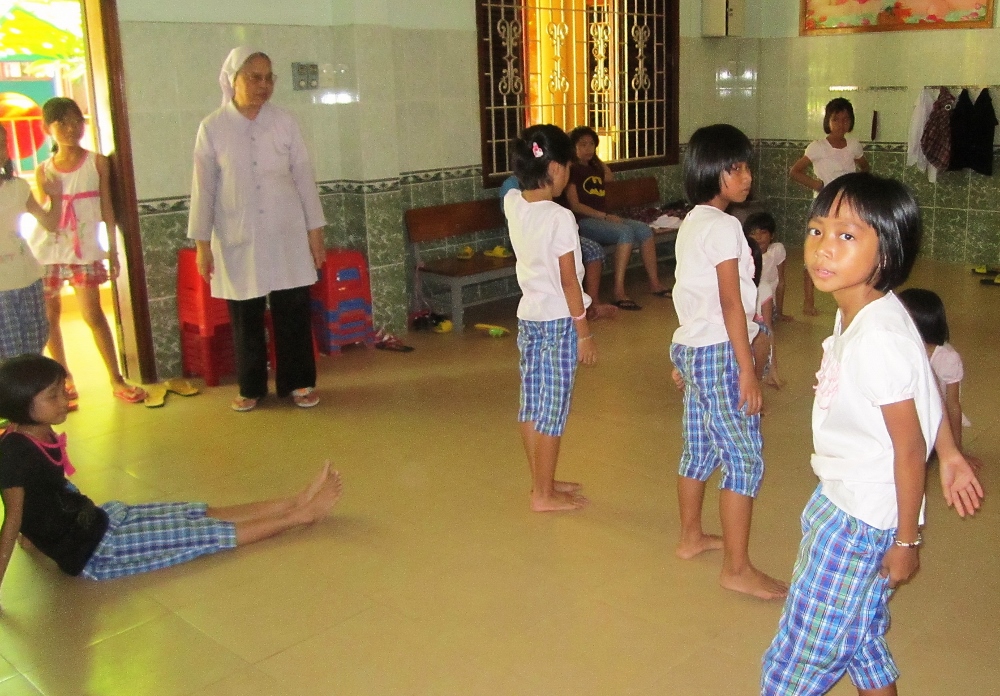 Sr. Tho shows girls how to dance at the center. (Peter Nguyen)

What is the purpose of your ministry?

Our ministry aims to create favorable opportunities for disadvantaged kids to grow physically and emotionally as other normal kids do, so that they can live a happy life and become good citizens and Catholics.

Most of those kids are hungry for affection. They often come to talk and play games with visitors, even some have visitors hug them tightly. They also like dancing and singing songs to visitors.

As you know, if they are not brought up well, they would be at risk of being sexually abused, ruthlessly exploited or even become gangsters.

What are kids given?

We have the kids and their parents or relatives meet on a monthly basis so that they can get close to one another. Over 20 kids have returned to live with their families.

Regarding abandoned kids, their personal backgrounds are recorded and they take my family name. We hope they will be reunited with their parents in the future.

Most kids go to public schools and four of them now study in university. They also learn ‘soft skills,’ human values and ways of cooking, making clothes, embroidering, dancing and playing the organ.

They stay at the center until the age of 18 or they finish studies at universities and have jobs. Many regularly return to visit the center.

We give food and money to poor people to do small businesses and raise cattle for a living, while others donate money to serve kids at the center.

We hold yearly meetings for elderly people who used to live at the center and offer them meals and gifts so as to strengthen their fraternal ties with younger ones. 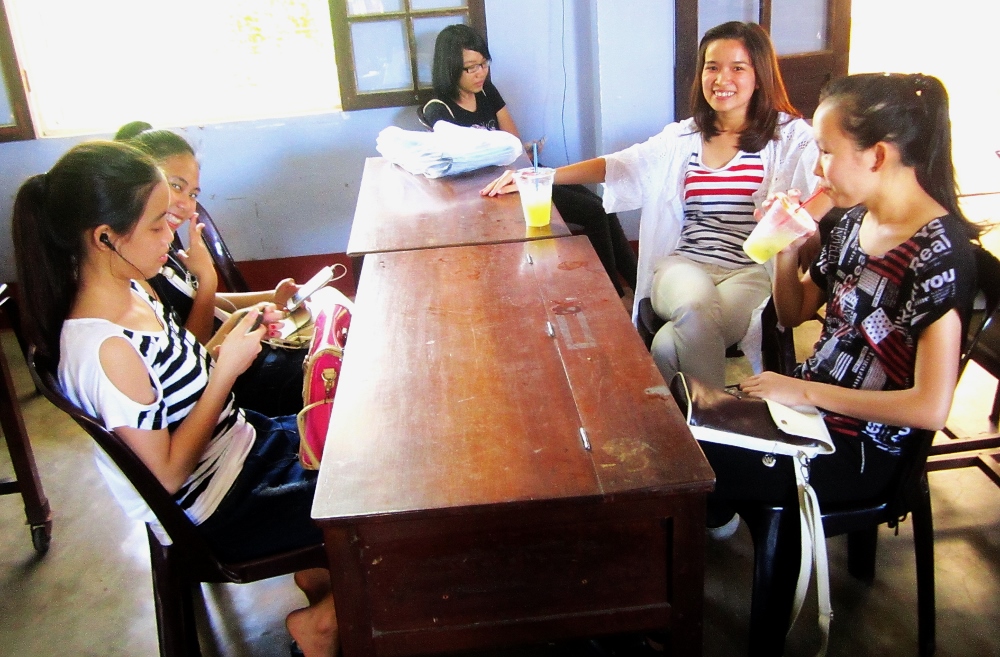 Mary Le Thi Kim Thanh, second from right, 18, visits her friends at the center on Aug. 14. Thanh was brought up at the center by Sr. Tho for 14 years before her mother took her back in 2013. (Peter Nguyen)

How did you build the new facilities?

Our old orphanage dating from 1889 has been “borrowed” and used as a hospital by the government since 1975, so we had to raise children at our convents that were too small for them.

In 2008, we cleared our nearby old cemetery with 10,000 square meters [about 11,000 square yards] and built new buildings, educational facilities, chapel, sports field and rock garden surrounding a Marian statue to serve the children.

We sought financial support from foreign benefactors to pay costs of the construction and the center’s expenses.

It seems that you have done other things for poor people?

We try to improve the quality of life of poor people by providing pieces of equipment for the supply of clean water for 1,000 people in urban and rural areas. Those people are too poor to install pipes and other equipment.

We also give them financial support to grow field mushrooms for a living.

What encourages you to work with disadvantaged people?

When I was a child, I saw an orphan girl my age look after  her employer’s baby all day, and get  severely punished for letting the baby fall down. I was deeply moved by the scene and have tried to do something useful for orphans.

We are urged to bring happiness and comfort to people in need by the verse “whatever you did for one of the least of these brothers and sisters of mine, you did for me.” [Matthew 25:40]

Why do you still continue working at the age of 81?

Retirement is boring [smile]. Our congregation does not set the retirement age and we work until we are too weak or sick. I find joys from my work and enjoy good health, thanks to work. I get up at 4 a.m., do exercises, pray and attend Mass, read books and run daily activities, ranging from teaching vocational skills and  preparing food to having bicycles repaired for the kids to go to school.

Generally speaking, I really love my work and serving the kids.

It is said that wisdom comes with age. I have gained practical and valuable experiences in my life and share them with younger nuns at the center.

Q & A with Sr. Nancy Usselmann on what it means to be Catholic in the Internet Age