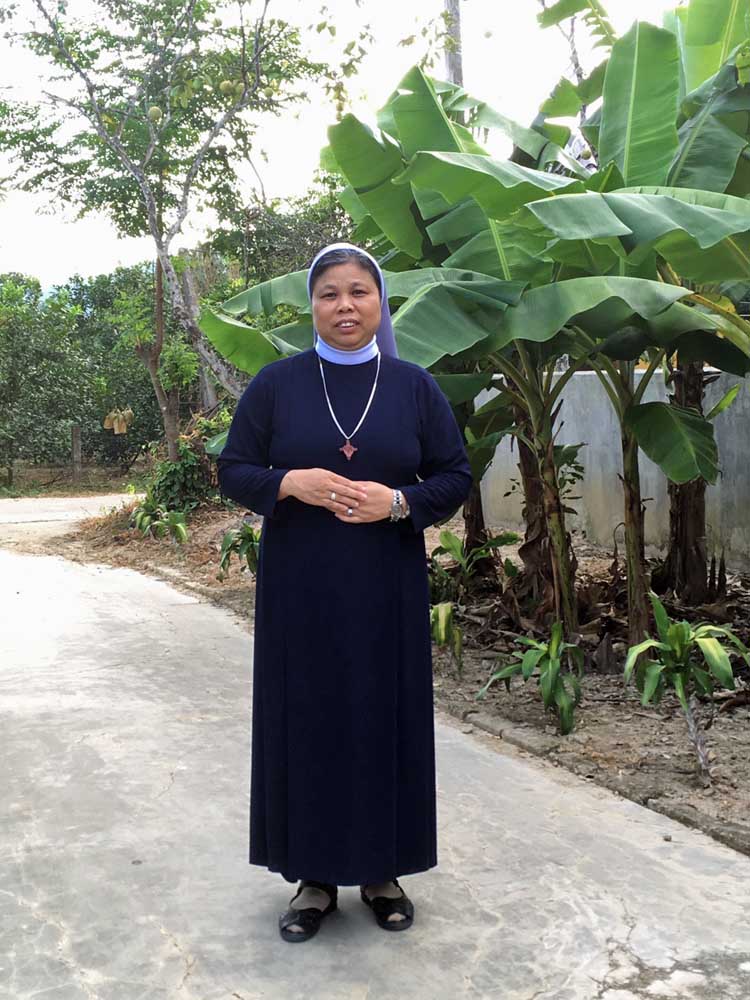 Vinh City, Vietnam — After 1954, when communist forces defeated French troops in northern Vietnam, they persecuted Catholics and limited religious activities. Most congregations fled to the south.

In the years that followed, some women who wanted to live a consecrated life could not afford to join the congregations in the south. Fr. Joseph Nguyen Dang Dien established the Society of Missionaries of Charity in Vietnam's northern Vinh Diocese in 1980 to meet increasing vocations from those women.

At first, Dien gathered groups of women to live, work and pray together in their area to avoid the government's restrictions on travel, work and faith practices. When the government eased restrictions on religion in the 1990s, allowing people to travel freely, women from the diocese, some of whom had been afraid to join the community because of government restrictions, entered the society. Dien started to send some sisters to study theology and other church subjects in the south. 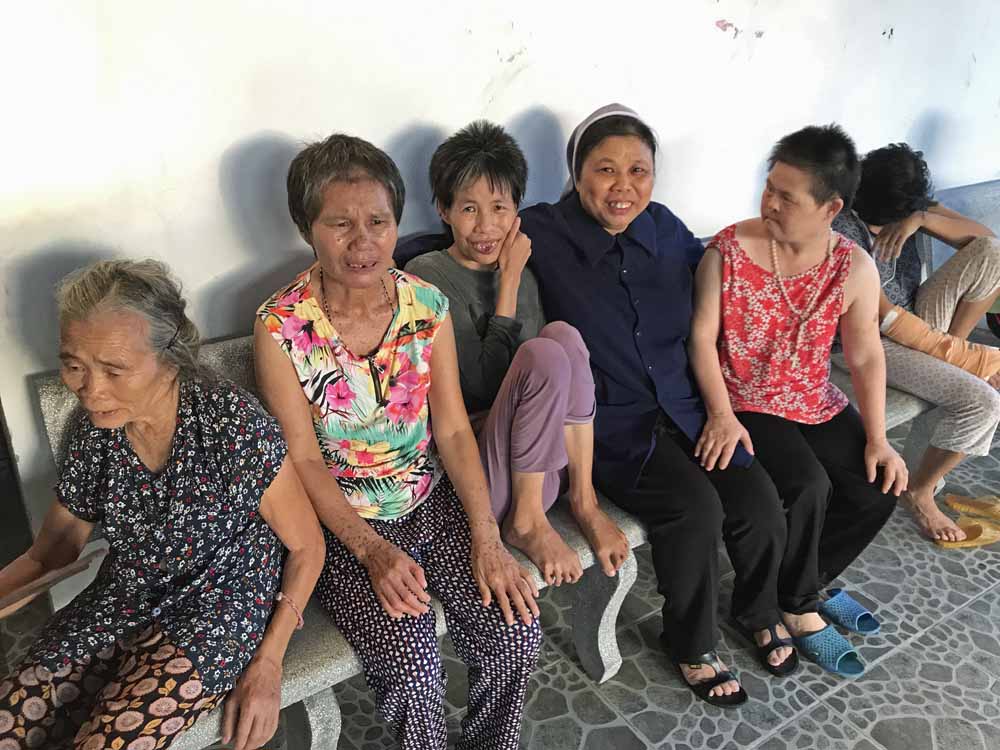 The society now has nearly 670 members. The community's mission is to do all things to honor God and bring happiness to people. Its members do manual labor to support themselves and look after orphans, people with physical disabilities and the elderly without relatives.

Sr. Mary Nguyen Thi Mai has served as the superior of the Society of Missionaries of Charity since 2010.

GSR: What challenges has the society faced?

Mai: At first, we had various difficulties. We lacked food. Daily, we had rice for one meal and cassava and vegetables for the two other meals. We had to sleep on the floor near pigsties.

Many sisters in the Ha Tinh Province dove into the sea to collect small stones to sell to building-materials traders for a living. At night, others made concrete at construction sites and worked on rice fields.

Those arduous jobs made sisters exhausted quickly, so now we no longer involve them.

Those who entered the society in the early years and only finished elementary school had no opportunities to study further and had to work hard to support the society. They sacrificed everything for development of the society.

Sisters cultivate crops, produce bricks, chop firewood in forests, raise cattle and other jobs for a living and support disabled people and orphans.

We built a building as the motherhouse in 2011 in Nghi Loc district of Nghe An province. Society members gather to attend annual retreat sessions at the building.

Many have to sleep on floors due to lack of rooms. We have to ask for fresh water and rice from local people for sisters when they go into retreat.

How do you set up communities?

Priests and Catholics from other places invite us to serve disabled people and the elderly in their areas. At first, they build houses for us or lend us land and houses to stay and care for people in need.

We look after babies, produce and sell herbal medicines, and do various jobs to support ourselves and them. 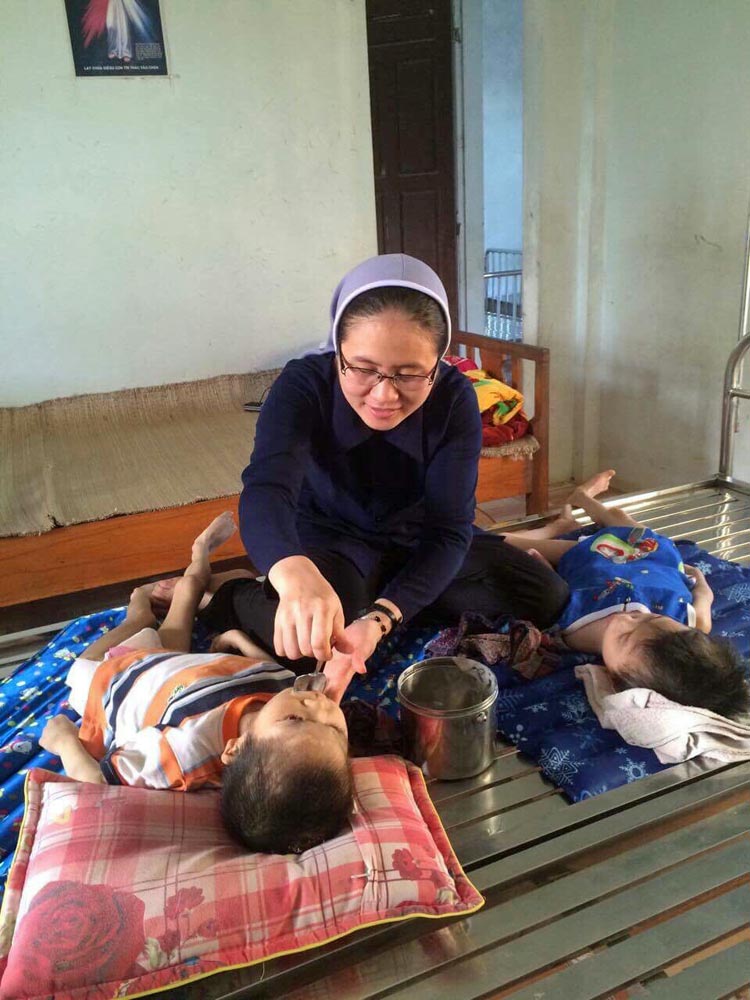 We now have 42 communities and 12 centers for orphans, people with physical disabilities and elderly people without relatives throughout the country. We offer free accommodation, food and health care to some 300 people.

We work with women with unplanned pregnancies and foster their babies.

In places where we have no communities, some sisters stay at people's houses to work with local people. A sister has spent nearly 10 years staying at the house of a family with three members, but two of them have mental illnesses. She looks after them, cooks them meals, cleans their house and treats them like her siblings. When she works away from them, she misses them greatly.

What challenges do your society face?

As a newly established society, we have difficulty in supporting ourselves and building facilities for our work.

Our communities have no regular income to pay for their studies and services. We could not afford to give basic needs to our sisters, so we remain to depend on generous support from benefactors.

Personnel training is our urgent requirement. Living and working in a developing society, we have to further our studies and have professional skills in our services.

Many young sisters attend theology courses and study church subjects at church-run centers. We also have a house for those who prepare to take vows.

Some sisters study music, medicine, pedagogy and other fields at colleges and universities.

We are called to live out charity in the light of the good news, wholeheartedly serve other people and care for the elderly, sick and disabled without homes. 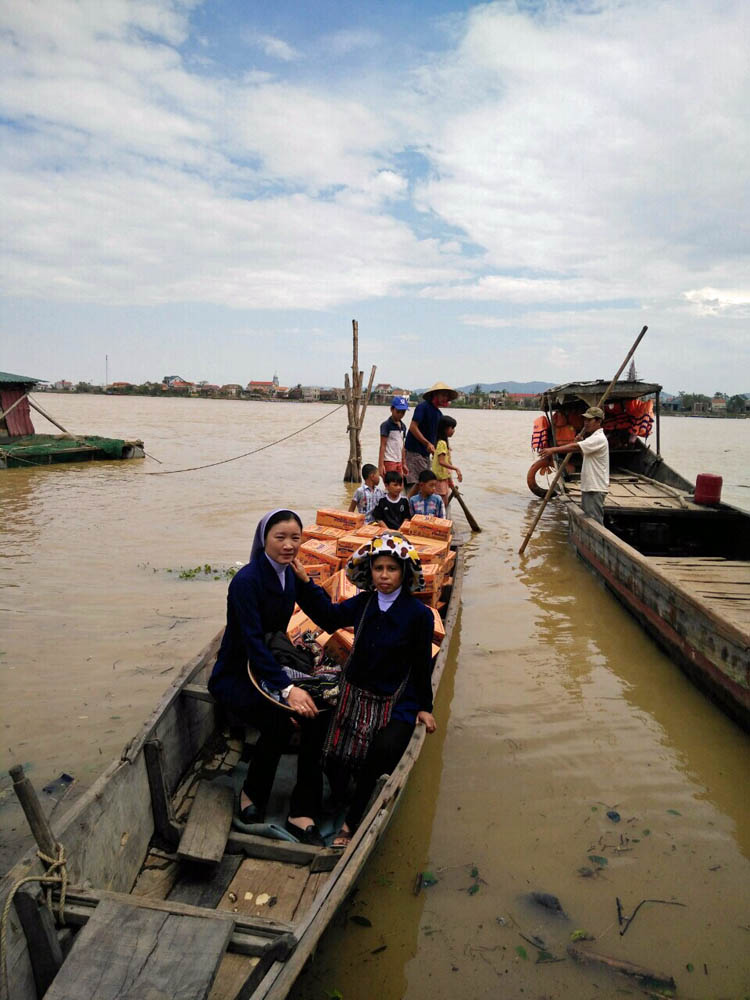 We see that God always helps us overcome challenges and difficulties, giving necessary things to us when we are completely destitute and helping us find ways out of impasse or obstacles. God arranges all good things for us and we trust in his providence.

Our duty is to make more sacrifices and pray harder for the society's good developments.

Q & A with Jo Piazza

Q & A with Sr. Mary Do Thi Thuy, working with Vietnamese people with HIV/AIDS