Q & A with Sr. Tamam Salame, leading a Lebanese hospital through financial challenges 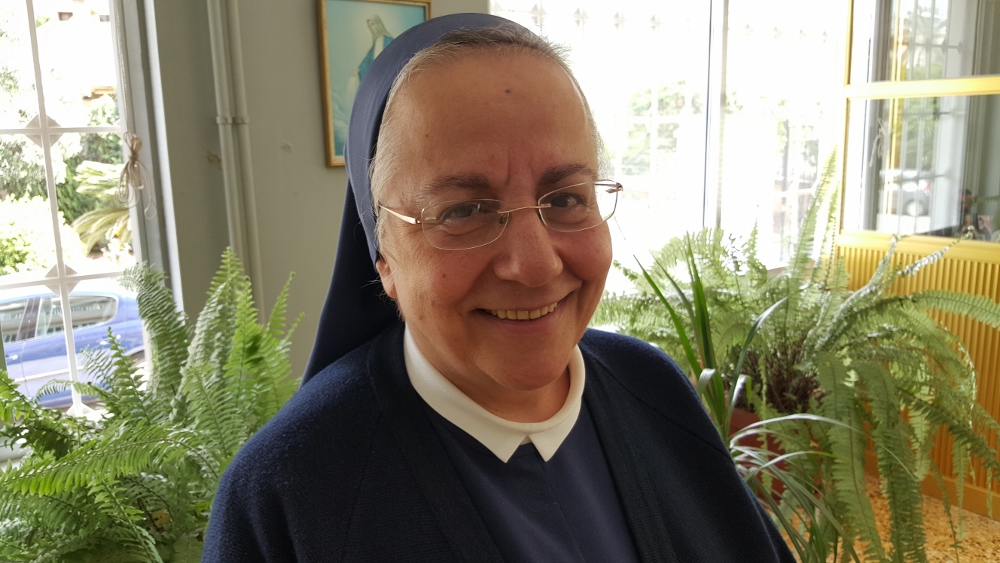 Sr. Tamam Salame is sister superior of the Franciscan Sisters of the Cross' Notre Dame Hospital in Beirut, Lebanon, and her colleagues include Dr. Amine Webhe, a physician on staff at the hospital, and Elie Rizkallah, the hospital's financial director.

The hospital was established in 1948 by Blessed Abouna Yaacoub, the founder of the congregation and a figure of great veneration in Lebanon. Since its founding, Notre Dame Hospital has served as a center for the treatment of chronic conditions. The focus of Notre Dame's work is in treating those who are mentally disabled, and most of the patients are older Lebanese who live in poverty. There are currently 550 patients at the hospital, and the staff includes 20 Catholic sisters.

Like other institutions in Lebanon right now, the hospital faces financial challenges: Government subsidies are declining at a time when the country has taken in more than 1 million refugees from surrounding countries. Basic services are being challenged and under strain, and other institutions in Beirut are assisting in meeting medical needs of recent refugees.

GSR: What is the overall situation for your institution at this critical time?

Salame: We have an institutional tradition we are proud of. After the end of World War I, Abouna Yaacoub saw a need in the region — to deal with poverty, misery and illness. He thought about this in a deep way.

People were becoming more aware of mental illness, particularly after the war, and so the hospital met a need at the time. It continues that role today, to serve the poor in our country.

But we are passing through a very critical financial situation. Most of our funding comes from the Ministry of Health, but they are providing us with a subsidy of $17.50 [in U.S. dollars] per day for each patient, while the actual cost of care per patient is about $55. The government is also about two years behind in payments.

Also, most of our buildings are old and need full rehabilitation and restoration, but that is impossible due to the overall financial situation and challenges. The whole financial situation is very difficult right now. But we also have some international support to restore our hospital, and we appreciate such support. 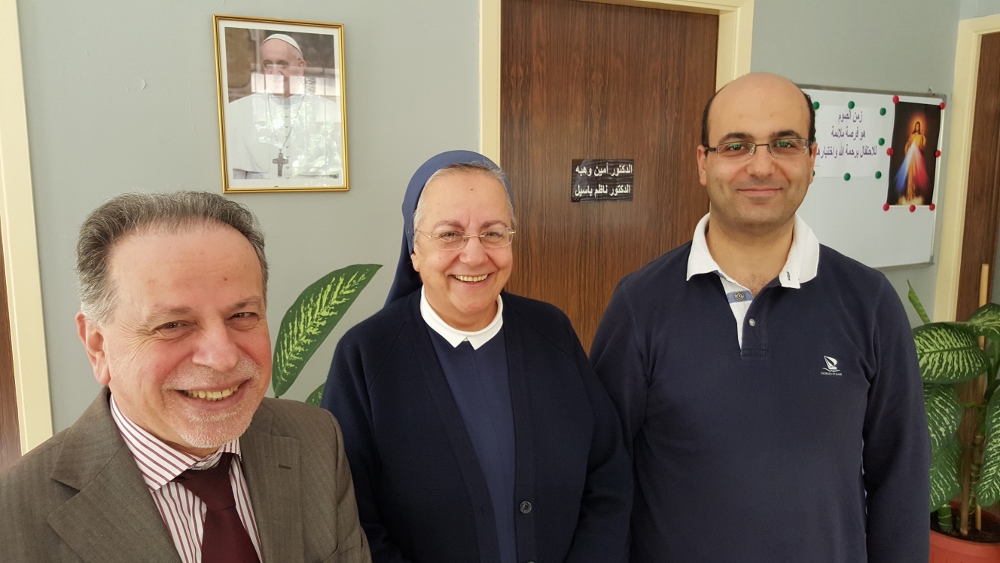 From left: Elie Rizkallah, financial director of Notre Dame Hospital; Sr. Tamam Salame of the Franciscan Sisters of the Cross; and Dr. Amine Webhe, a physician on staff at the hospital (GSR photo / Chris Herlinger)

Are you optimistic or pessimistic about the hospital's future and the overall situation?

I would say I am a realist more than anything else, but that ultimately, I am optimistic, and that is based on our history. During and after World War I, our founder, Abouna Yaacoub, helped people without a penny in his pocket, and eventually a hospital opened, and it remains open.

There are always windows that open. After World War I, the hospital opened. During the Lebanese Civil War [1975-1990], we faced challenges and remained open. Certainly, the important thing for our future, and the future of the country as a whole, is peace in the region. If we can have peace in Lebanon and the surrounding countries, we can face all of the difficulties.

Certainly, we believe Syrians [most of whom are Muslim] are welcome in Lebanon. They are most welcome, and there is no such thinking on our part as Christians that they are not welcome in our country. At the same time, we Christians want to stay in Lebanon, and we want to continue our traditions and institutions.