Q & A with Sr. Teresa Ngo Thi Hoang Bich, head of Community of the Beatitudes in Vietnam 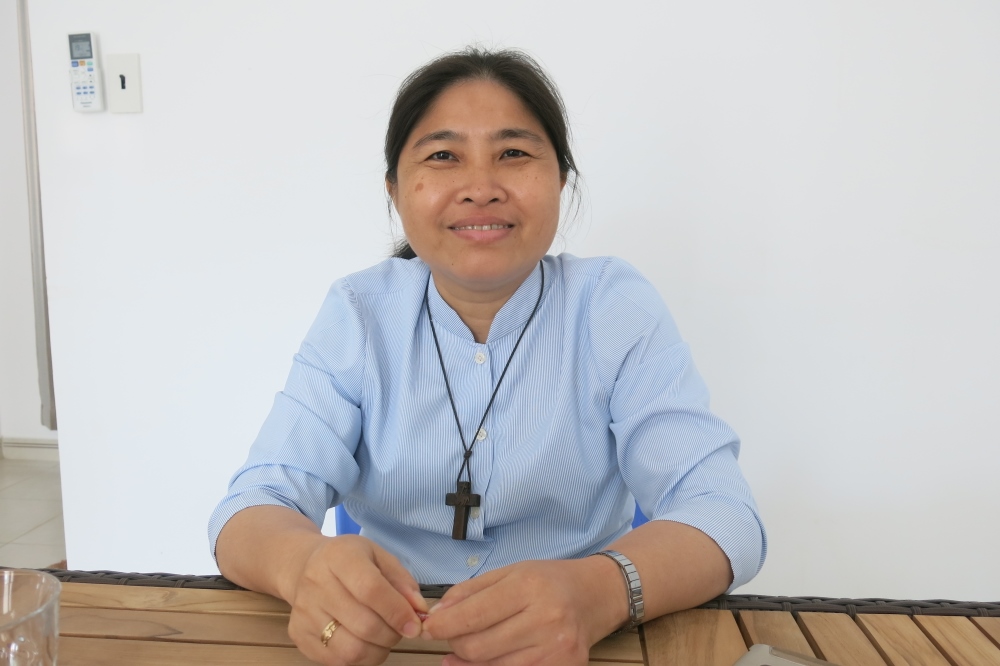 Sr. Teresa Ngo Thi Hoang Bich heads the sisters' branch of the Community of the Beatitudes in Veitnam. She was one of the first members of the community in Vietnam. (GSR photo / Joachim Pham)

Ho Chi Minh City, Vietnam — Founded in France in 1973 by two married couples, the Community of the Beatitudes has three branches, for brothers, sisters and the laity. Its members share a common vocation of prayer and fraternal communion, combining a marked contemplative dimension with numerous apostolic and missionary activities in places such as parishes, hospitals, Marian sanctuaries, and retreat centers.

The community is now present in 30 countries, including Vietnam. Its first members arrived in the Southeast Asian country in the early 1990s, when the communist government started to relax its policies on religions.

The community, which is among about a dozen foreign congregations that have come to Vietnam to establish communities, draws many vocations. Sr. Teresa Ngo Thi Hoang Bich, head of the sisters' branch in Vietnam and one of the first members of the community, talked to Global Sisters Report about the development of the community.

GSR: Could you please tell me about your community?

Hoang Bich: Sr. Myriam Nguyen Mai Thanh, a Vietnamese-French nun, returned to Vietnam and started to look for new vocations in 1993. Two years later, the first 16 people joined the community, studied the community's charism, and pursued studies at college. And 10 people, including me, took our first vows in 2005. It was the first fruits of years of working hard.

We were sent to attend summer courses in theology at local formation houses for five years, too. We secretly lived in rental houses to avoid the police's attention, taught catechism at parishes and served other people according to our own abilities.

Now the sisters' branch has 11 sisters and seven novices and postulants. The brothers' branch has three priests and eight brothers. The laity branch has one member, and others are interested in the community's charism.

The community has been under the Phu Cuong diocese and has worked publicly in recent years. Although local government authorities have not officially recognized us yet, they have not caused any difficulties for us. 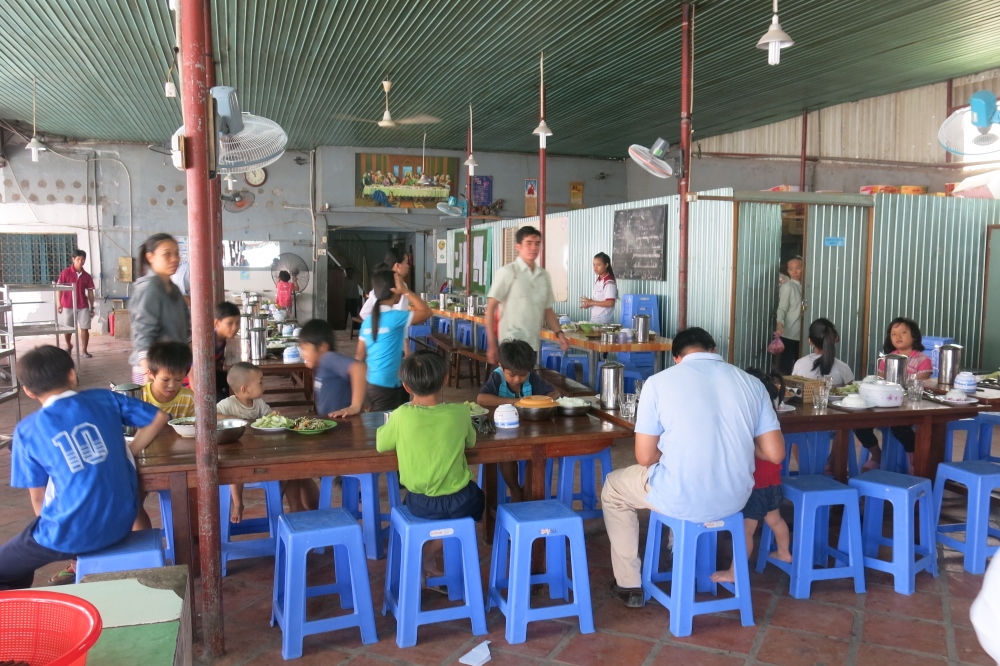 Community of the Beatitudes provides lunch to children at their center. (GSR photo / Joachim Pham)

How do you come to know the community?

When I served as a catechist at An Lac parish in Ho Chi Minh City, a sister introduced me to Sr. Mai Thanh. I joined the community because I am thrilled about its charism, spirituality and especially the parity among its members — consecrated men and women and the laity. It's like Christians in the early church.

What ministries is the community involved in?

We are invited to meet pastoral needs in places where we live. It means we have to discover people in need and help them.

I used to teach at public nursery schools and found that many children with physical disabilities were denied access to them. They could not attend catechism classes, either. At first, we took care of some children at our houses, and then people gradually sent their disabled children to us.

In 2000, local priests helped us buy land to build facilities for welcoming people with physical disabilities.

We built a four-story building on the 5,000-square-meter plot of land in March. The building is housing 90 people from 1 to 56 years of age. Most of them suffer from deafness, blindness, Down syndrome, mental disorders, intellectual disabilities, and paralysis, and others are children of people who have HIV/AIDS or are divorced.

They are given free accommodation, health care, education, scholarships and vocational skills for a livelihood. 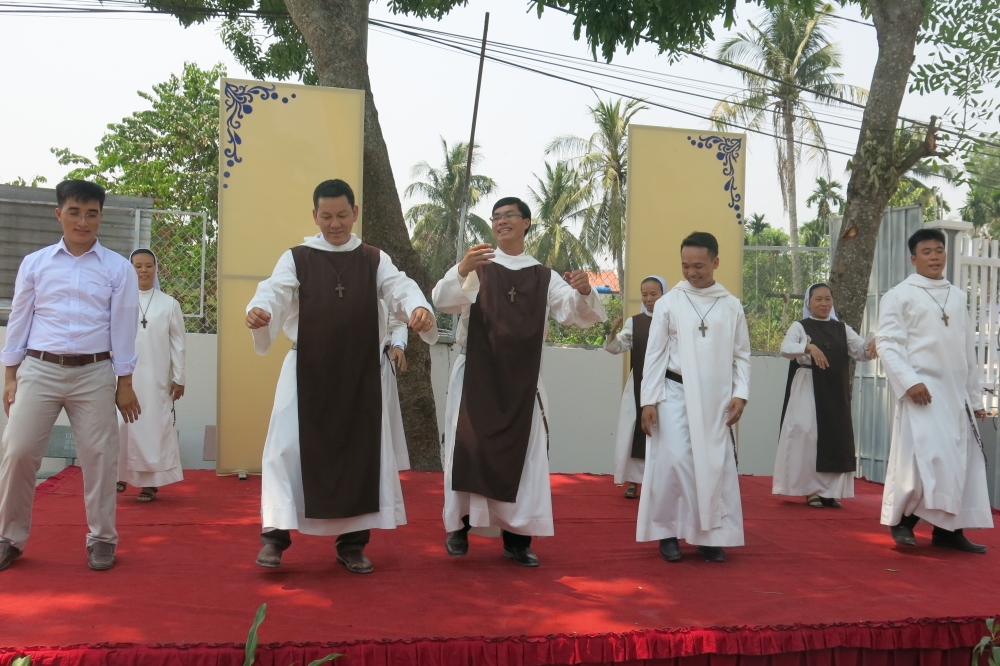 Members of the Community of the Beatitudes perform March 5 at the inauguration of the community's new building for people with physical disabilities. (GSR photo / Joachim Pham)

What about other ministries?

Our members offer accommodation and faith education to college students from poor families from other places who study in Ho Chi Minh City. We minister give material and spiritual support to domestic migrant workers on a monthly basis.

We also provide accommodation, psychotherapy and spiritual guidelines to pilgrims at the Tapao Marian shrine. Many people who have family problems and are stressed out come to us too after they have failed to seek advice from other psychologists.

We have two useful water-purified systems funded by Conrad N. Hilton Fund for Sisters, and we provide clean water for local people.

How is the community introduced to people?

We make the community's charism known among college students we work with at our hostels, and some of them have joined the community.

Through our activities, people appreciate and support our work by lending us land for cultivating crops, providing food for disabled children, selling us building materials at cheap prices, and helping us with other things.

We find our trust in divine providence to be a source of comfort, and the generosity of people keeps us working hard to serve people in need. 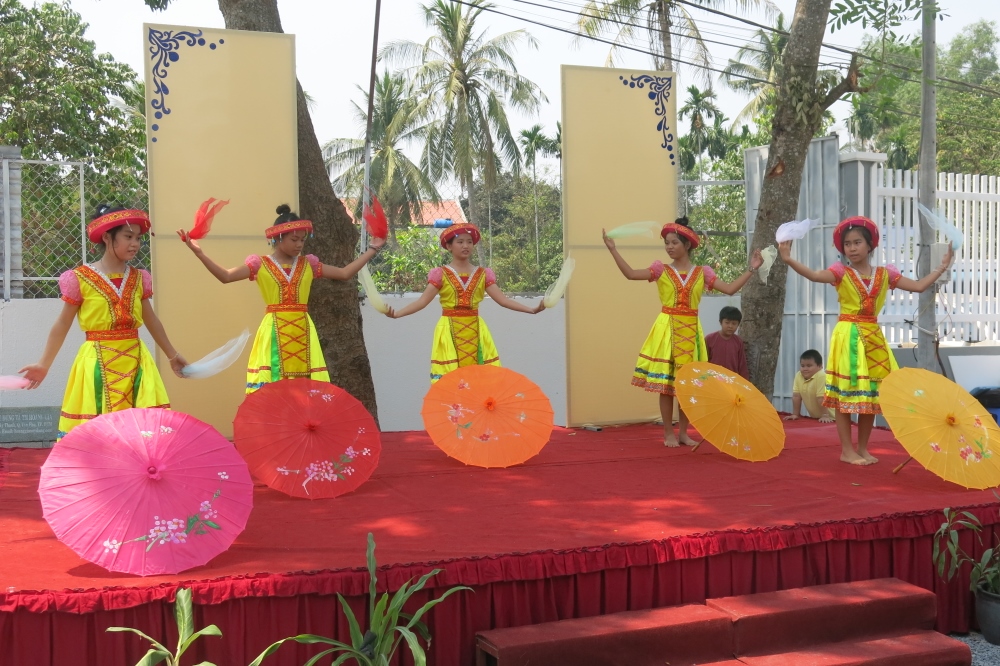 Children in costume perform a traditional dance at the March 5 inauguration of the community's new building for people with physical disabilities. (GSR photo / Joachim Pham)

[Joachim Pham is a Vietnam-based correspondent for Global Sisters Report.]

Q&As | Q & A with Sr. Teresa Ngo Thi Hoang Bich, head of Community of the Beatitudes in Vietnam

Q & A with Sr. Angela Ann Zukowski, a pioneer in cable television

Q & A with Sr. Crecensia Lucero