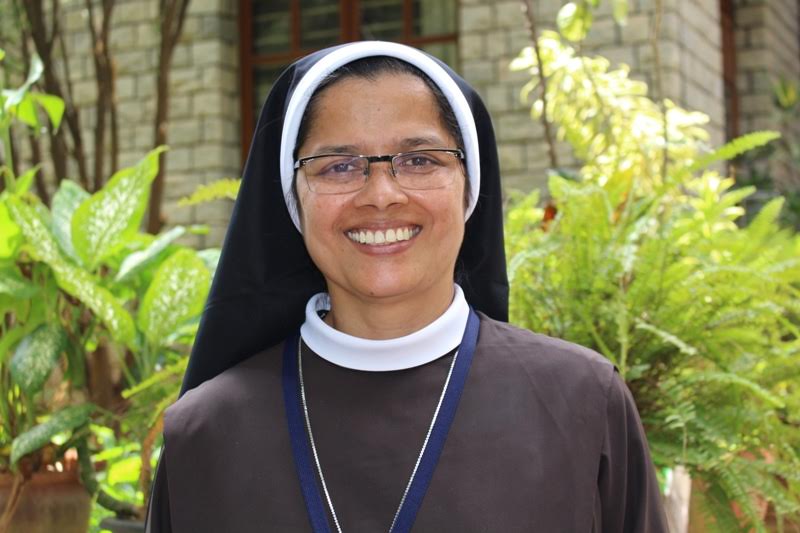 Bangalore, India — align="left">A star attraction at a recent meeting of moral theologians of Asia here was Sr. Vimala Chenginimattam, a member of the Congregation of Mother Carmel, an indigenous order for women.

The bespectacled nun with a bewildered smile wears the cap of the first Indian woman to secure a doctorate in moral theology. At the July 17-20 conference on “Doing Catholic Theological Ethics in a Cross-Cultural and Interreligious Asian Context,” Chenginimattam addressed a plenary session on “The role of women theological ethicists in terms of future development of moral theology.”

Later, she shared with Global Sisters Report about her journey and the challenges that she faces as a woman in Indian society and as a woman religious in the church.

GSR: Kudos for being the first Indian nun to secure a doctorate in moral theology. What do you do now?

Chenginimattam: I received my doctorate nine years ago from Alphonsiana Academy, Rome. At that time I did not come across any woman in India who had done a Ph.D. in moral theology.

Currently I am in charge of junior sisters of our congregation. Soon after my studies, I was appointed novice mistress [director] for three years. Then the congregation asked me to become junior mistress [director of sisters who have not taken their final profession]. I also teach in Dharmaram Vidya Kshetram [“Garden of the Virtues of Knowledge” temple], a pontifical athenaeum for philosophy, theology and canon law managed by the Carmelites of Mary Immaculate congregation. I also teach in our own theologate Jnanodaya [“Dawn of wisdom.” Both the institutes are in Bangalore, capital of the southern Indian state of Karnataka].

I teach moral theology, especially fundamentals in moral theology, and give classes on consciousness for master’s students. Another area of my academy is “Sexuality and Chastity in Creation.” This class is for men and women religious who are preparing to become formators in their congregation. Character education is also part of the curriculum.

I am also the prefect of studies in the congregation.

At Jnanodaya, we conduct a one-year diploma course for women religious. Currently, sisters from 12 congregations are attending the course.

Do you visit other theologates in India as guest faculty?

No. I haven't gone to any other centers. Actually, our congregation had three theology study centers; two are in southern India and another, which is now closed, was in western India.

What made you want to study theology?

To be honest, I didn't want to go for higher studies at all! My intention to join CMC was to spend time in prayer and contemplation. My initial desire was to become a saint. So I wanted to join the great cloistered Carmel. But God's plan was different, and I was drawn to CMC.

In the congregation I underwent several changes. As a junior sister I was asked to study physics for my bachelor’s degree. After the final vows, I was sent for philosophy and theology. Both together took five years. After spending a few years in Kerala [southern India], I was sent to Rome for my licentiate and Ph.D. studies. My thesis for the doctoral studies was “Psycho-moral development of girls and women, according to Carlos Saul,” a Jewish social ethicist. 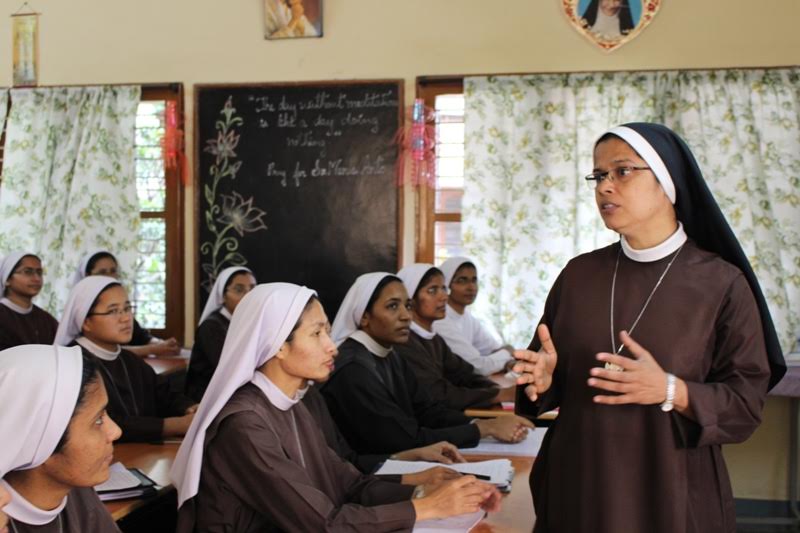 Do you find you are accepted as a woman theologian in India, especially in the church?

I haven't found any resistance so far. My congregation considers my studies to be a spiritual activity. Since I am more engaged with congregational responsibility, I do not have much scope to deal with the outside world.

However, I think the church in India has accepted women theologians. I know a number of women theologians who have doctorates and teach at various theologates across India. I assume there is pressure, as well as efforts on the part of the church, to involve more women in seminary teaching. I strongly believe it is the need of the hour to enforce integrated formation. The move is gradually catching up. More and more senior women religious now take theological courses offered in different centers in India.

I consider it a privilege to teach in a well-reputed theologate like Dharmaram. It gives me a chance to learn while teaching.

Can you describe your first day in the class? Was it a mixed group?

A majority of the students in Dharmaram are seminarians. So, I got a mixed reaction. At first students were perplexed, as the topic was earlier handled by a priest. I had anticipated their expectation and suggested to the priest that we should share the subject.

Fortunately, it was a small group comprising some ordained priests and a nun. They were very receptive and responsible. This encouraged me to sign up for more classes. Now I take classes frequently. Every discourse consists of 35 to 40 hours. The college pays me for my service.

You are aware that sexual violence is increasing in India. As a moral theologian how do you look at it?

I am not an activist. Yet as an academician I teach the students, women, to stand on their feet. I tell them that there is no point in depending on men to find the solution to a problem. The initiative should begin from women. My great inspiration is the founder of our congregation St. Kuriakose Elias Chavara. The 19th-century educator of Kerala focused on women’s empowerment. In his time, women were confined to the kitchen. Many acknowledge that Kerala has become the most literate state in India because of St. Kuriakose.

I also work with the group of sisters. I keep informing them about the latest developments and trends in the country. Discussing issues together helps us avoid misuse of power in the church and psychological degradation.

In your paper at the theologians’ conference, you mentioned abuse and discrimination in the church. Can you elaborate on it?

There is a general feeling in Indian society and in the church that women are subordinates. Some even ask why women need to study theology to work in the diocesan kitchen. I see a power struggle going on between men and women in the church. Both the groups should work together instead of demanding segregation of roles in the church administration. Personally, I have experienced support from men.

However, as the first woman moral theologian, I used to feel left out and helpless in the beginning, as there were none with the same interest and similar qualifications. But now I see many more women scholars.

My major commitment with the formation group has prevented me from becoming part of any forum in India. I am quite ignorant about their activities. Once I attended a seminar where the wave of feminism there was a bit too much. I found myself a misfit there. I do not belong to the extremist feminism movement. We need to strike a balance. There is no need to accuse men. I like the richness of women, because my mother had taught me that in my childhood.

Hence I do not favor women’s ordination as they are already doing much in the church. The huge number of women religious in India is an enormous wealth to the church. Every woman should find out the purpose in her life.

Do seminarians, the future priests, harbor the patriarchal mindset? What have you observed?

The mindset has not changed much, it remains the same. Even in their young age, boys tend to dominate their older sisters. I have not personally experienced it. But I have seen such things happen. A newly ordained priest would assert his authority and block collaboration with nuns and lay people. Dominance prevails.

I see such a trend even in my family. My sisters had to give up their professions and remain as homemakers. So I speak with the men in my family, too. 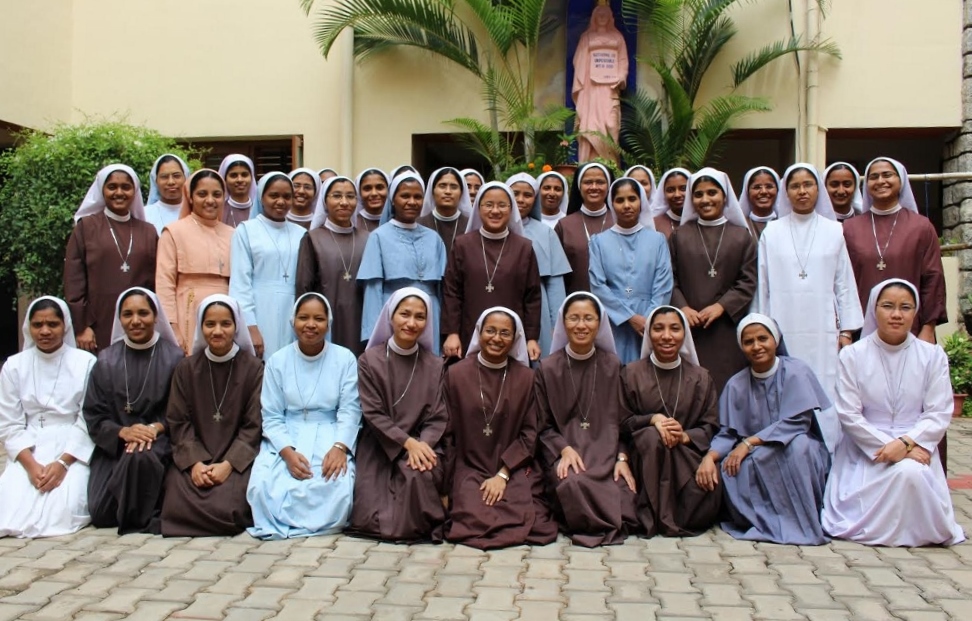 Students of Jnanodaya (“Dawn of Wisdom”), a theology institute managed by the Carmelites of Mary Immaculate in Bangalore, southern India.

Do women take such things silently?

Yes, mostly they do. That's the way the hierarchy is designed.

What about your family? Could you tell us something about that?

I am from Kerala. I have four siblings — three sisters and a brother. We lost our dad in an accident when I was small. My mum was too young at that time, and she had to look after the kids. She was equally worried, because four of her children were girls. We were over protected. The family atmosphere formed me into a gentle woman, more than a radical feminist.

Why did you choose the religious life?

Since childhood I had the desire to become a saint. None of my other siblings are religious. I was an introvert. After joining the congregation my life has changed drastically. I am given many opportunities. Although I have changed, yet I still remain a bit reserved.

How was the society where you grew up?

The Kerala society is quite conservative. It does not encourage women to express their opinion. The suppression is not from men alone. At times it is women who choose to remain quiet. We do not make our voice heard especially in the church context. Women religious form a huge number, yet our voices are not loud enough to be heard.

What could you do to improve the situation?

I need to assert myself to address the issues from the grassroots level. Calling the attention of other sisters too is important. The best place to begin the change is the family. Our family ministry aims to bring changes in society especially with regard to the dignity of women. I take along the novices for the ministry. We travel to parishes and stay there for days. It is well accepted by people.

What do you do in families?

We go in groups of 3 to 4 people. In the family, we invite its members to pray together. Usually people respond to it positively. During prayer, we ask them if they have any special intention. Most families mention a problem that needs divine intervention. After the prayer we strike up a conversation. They share worries and joys with us. They feel confident in and confide in us. If needed, we visit the family again. I find it very fruitful.

What message did you take from the theologians’ conference?

I was asked to present a paper for the conference. I introspected and was a bit disturbed. I assessed my contribution to improving the situation. I realized I haven't done much as a moral theologian. However, I felt relaxed after presenting the paper. I got an opportunity to speak out about issues concerning women. It was my first experience in speaking in public. It was wonderful and I hope to address many more public platforms.

[Sr. Tessy Jacob is a member of the Holy Spirit congregation and a second-year student of journalism at Christ College, Bangalore, in southern India. This article is part of collaboration between GSR and Matters India, a news portal that focuses on religious and social issues.]