Q & A with Sr. Infant Tresa, encouraging health and hope through yoga 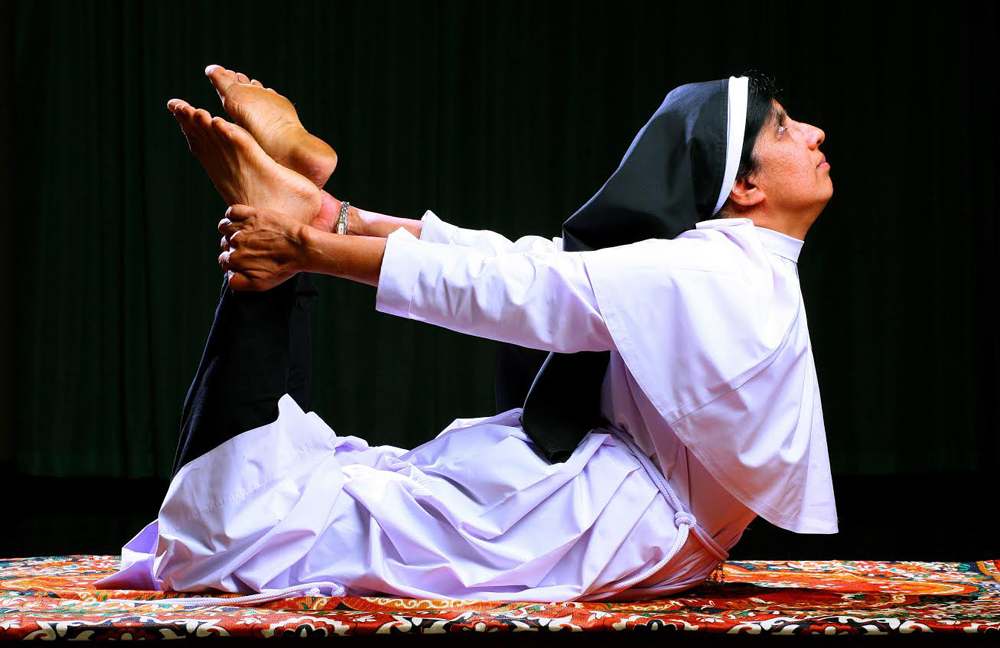 Muvattupuzha, India — Sr. Infant Tresa is both a Catholic nun and a yoga master. The 65-year-old manages two yoga centers in Kerala, a Christian stronghold in southern India, at a time when some church leaders, including the Vatican's chief exorcist, Fr. Cesare Truqui, view the ancient Indian system as satanic.

Tresa is among the more than 7,000 members of the Franciscan Clarist Congregation, a Kerala-based congregation with the largest number of women religious in India. She says yoga is an extension of her religious life and has helped cure her of illness.

Before becoming a full-time professional yoga teacher, she worked as a nurse in various hospitals and medical colleges in Kerala. Tresa shared her mission with Global Sisters Report.

GSR: What drew you to yoga?

Tresa: I had severe back pain and wheezing while studying nursing in Kerala in 1976. Doctors advised me to take medicine, which I did for a long time. I also had to use a [special] belt. But nothing worked.

In 1985, I met a yoga guru who came to the institution where I was studying. I told him about my health problems. He advised me to do yoga and taught me to do it. I began to feel better after doing yoga. I also got relief from my back pain and wheezing. I felt it was a blessing from God. I then decided to make yoga a part of my life.

I have practiced yoga for the past 31 years. I am convinced that it was yoga that solved my health problems.

When and how did you start teaching yoga?

In 2006, after retiring as a nurse, I decided to teach yoga to help others. In the same year, I set up a yoga center at the Nirmala Medical Centre at Muvattupuzha. After a few years, I set up another yoga center in Thodupuzha, a nearby town where I teach two days every week.

Some Christians and churches believe yoga is against the Bible and the Christian faith. What is your response to them?

It's out of ignorance about yoga that a minority section of Christians in the church opposes it, saying it belongs to Hinduism. Yoga does not belong to any particular religion. Yoga is a contribution of ancient India to the world.

Since yoga originated in India, there is a misunderstanding that it is part of the Hindu religion. Indian seers and sages developed and promoted yoga after years of meditation for humanity to experience God, peace and well-being. In this world of turbulence, violence and crisis, where people have no mental peace and lead a life of stress and anxiety, yoga gives people comfort and peace and takes them closer to God.

In the olden days, only seers and sages practiced yoga. Today, things have changed. People — irrespective of religion, language and community — are attracted to yoga and practice it. Yoga enhances concentration, improves meditation and helps you stay focused. Constant, long-term and sustained practice of yoga helps one become less materialistic and consumerist and changes one's mental outlook to life.

Will you give up yoga if the church asks?

I will never go against the church if it asks me to leave yoga, but I am absolutely certain that the church will never ask me or anyone to give up yoga. It has nothing to contradict the Christian faith or teachings. Yoga makes better human beings.

What is yoga? How do you define it?

Yoga is a discipline and holistic science. It touches all aspects of human life. It promotes a healthy lifestyle and provides complete health protection to human beings. 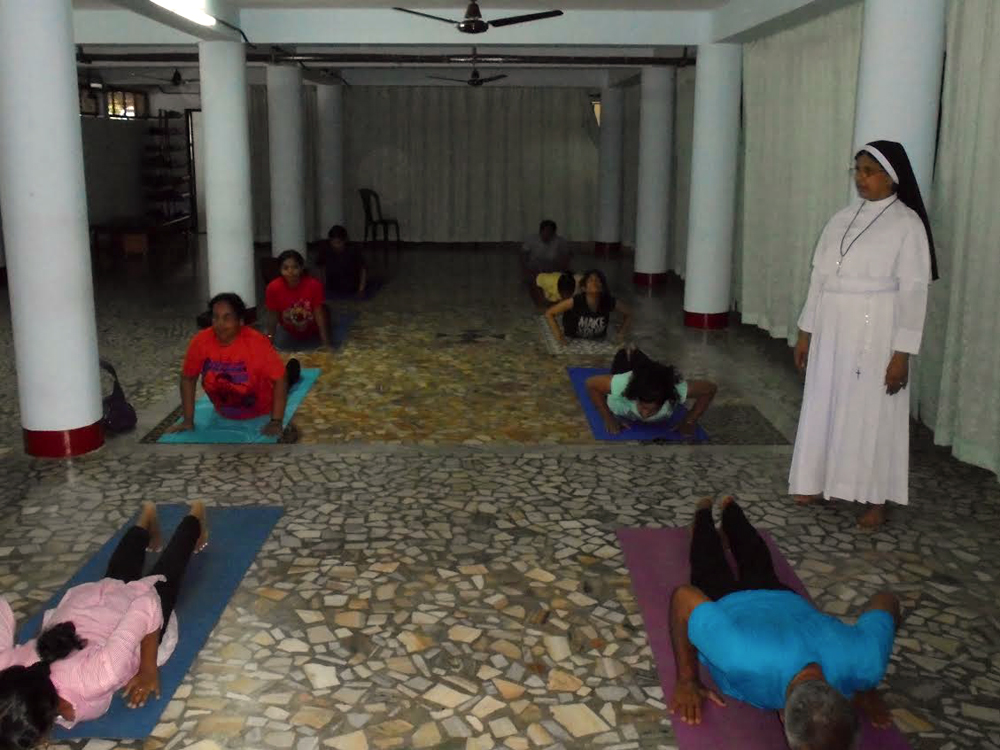 Does your congregation support your work? Have you faced any opposition? If so, how did you overcome them?

My bishop, my congregation, my superiors and all my colleagues support and encourage me. In the beginning, some people expressed apprehension about a nun doing and teaching yoga. I never felt discouraged by such doubts of the people. Today, with the help of media and awareness, people have become better informed and are realizing the values in yoga.

I'm so happy that people of different religious and cultural and linguistic backgrounds from across India and from outside of the country come to our yoga center to learn and practice yoga. The people who practice yoga become very mature, level-headed and positive.

What are the illnesses that yoga can cure?

Most human illness can be cured by yoga. Yoga helps in generating correct quantities of hormones from all glands in a human body. Diseased organs in a human body are repaired, encouraged, rejuvenated. Muscles and bones, nerves, respiratory, excretory and circulatory systems are coordinated and make the body flexible and healthy and adjust to the environment.

Lifestyle diseases like diabetes, cholesterol, blood pressure, rheumatic arthritis, back pain, asthma, obesity, epilepsy, gastrointestinal disorders, menstrual disorders, muscular dystrophy, and so on are cured and corrected. The mind becomes stronger and able to endure pain and unhappiness, to face sorrow, anxieties, and mental and physical problems. Depressed patients become happy and normal. Concentration is developed. There is an increase in memory power and intellect. Yoga also controls negative emotions like anger, greed and violent behavior.

What have been your achievements as a yoga teacher so far?

At present, two yoga centers function under my supervision. I have taught yoga for nearly 4,000 people at the yoga center. Most practice it daily. Every now and then, many of them come to the center, and we organize get-togethers. We also go for picnics. People consider the center a yoga family.

Nowadays, the government encourages yoga education and training in schools and colleges in the country. We also run a yoga teacher training course. Those who complete the course are given eligibility certificates. These certificates are recognized and accepted by educational institutions for hiring yoga teachers in Kerala.

My most unforgettable experience as a yoga teacher was helping a crippled person walk and move about normally through yoga therapy. He was a lawyer in Muvattupuzha, and one side of his body was paralyzed. He could not even get up or sit. Through yoga, I brought him back to a normal life. Now, he can walk and lead a normal life.

Who are your students?

Women, men, children of different age groups, people with different illnesses, elderly people, and pregnant women attend my classes. Though I teach people belonging to different backgrounds and age groups, I find more joy and satisfaction in teaching children older than 10. Yoga helps children in their character formation and enhances their physical stamina. Yoga also helps them achieve concentration that helps them focus in their studies. Yoga also helps children who are obese to reduce their weight and size.

How do you keep updating as a yoga teacher?

Every year, I make it a point to participate in yoga conferences held in different parts of India and abroad. Last year, I attended a 200-hour teachers' training program by the Yoga Alliance and got an award in recognition of my work.

How has the creation of the International Day of Yoga affected your work? Have you found more people interested in yoga?

It was an enriching experience for me. This year, we celebrated the International Day of Yoga on June 21. The local member of the Legislative Assembly in Kerala inaugurated the function. Yoga exercises were performed by the participants. Newspapers and television channels covered the function. It is very gratifying that the number of yoga students and participants are increasing day by day.

As a yoga teacher, what do you believe is your best asset?

My spirituality, my faith, my mental and physical health, and strength that I gained through yoga are my assets. Also, I'm a person of positive thinking and a committed religious woman who unwaveringly follows Jesus Christ.

What do you feel is the most important skill a yoga teacher should possess?

Patience and tolerance under all circumstances are essential to become a good yoga teacher. Above all, as for me, I'm a strong believer in God, who is my creator and savior. My faith has helped me in becoming a good and effective teacher.

Why did you become a sister?

I was born in 1951 in a family of five children in a village near Palai, Kerala. My name then was Aleyamma. As a child, I used to hear a lot about mission and the work of the church and my parish.

I was religiously inclined as a young girl. My life revolved around my Bible, my rosary and my love for Jesus. Soon, I developed a desire to become a nun and devote the rest of my life to the church. After pondering more over it over a period of time, I decided to become a sister so that I can do a lot more good to society and community and also pray and worship God more closely.

But my family was against my wish to join the convent and become a nun. They opposed my decision. I was very upset. I protested and expressed my unhappiness. I went without eating for days. Finally, my family agreed and let me become a nun.

[Philip Mathew is a journalist based in Bangalore, southern India.]

Spirituality | Q & A with Sr. Infant Tresa, encouraging health and hope through yoga