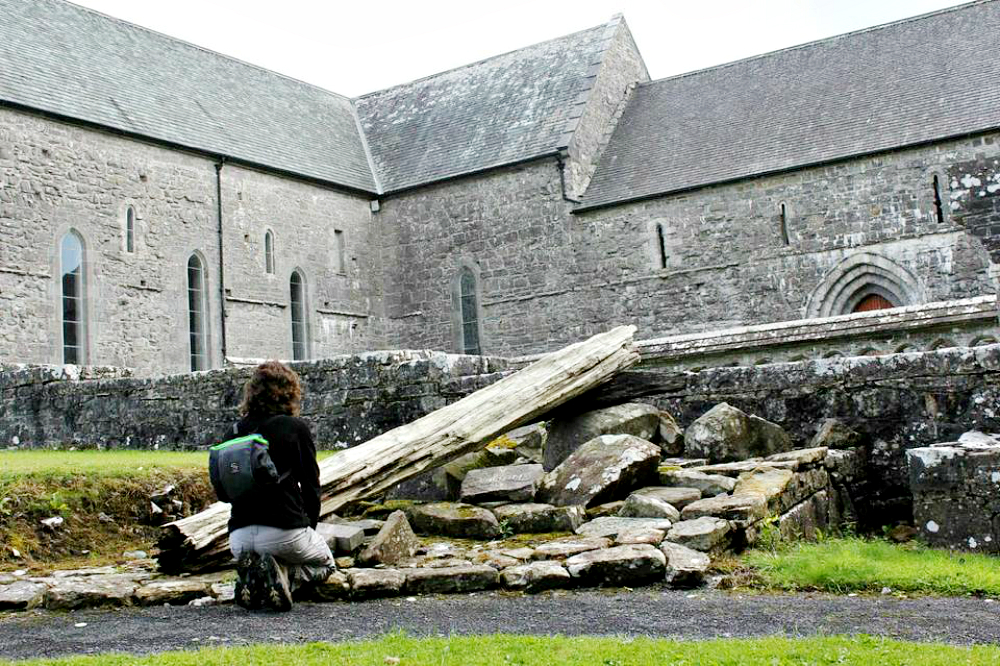 Sr. Jessica Kerber prays at Ballintubber Abbey in County Mayo, Ireland, a stop along the pilgrimage to Croagh Patrick, in 2014. (Provided photo)

Haverford, Pennsylvania — Ten years ago, Jessica Kerber was on a mission trip with the Jesuit Volunteer Corps in El Salvador when she met Handmaids of the Sacred Heart of Jesus sisters. One of the sisters asked Kerber if she had ever thought about religious life.

Kerber said she hadn't thought about religious life seriously but would be open to it. The sister replied that if she had thought about it, she owed it to God to explore it.

Since then, she has entered the Handmaids, completed a theology degree at the Jesuits' Comillas Pontifical University in Madrid, is involved in campus ministry at St. Joseph's University in Philadelphia, is an adjunct theology instructor at Villanova University, and, as of Aug. 25*, is the director of the Handmaids' retreat center, the St. Raphaela Center, in Haverford, Pennsylvania.

Now 35, Kerber hopes to profess final vows in the next two or three years.

GSR: At the retreat center, you're in contact with a lot of women discerning religious life. How does one discern whether God is calling?

Kerber: We all want signs. We all want the burning bush. We want to know: "This is it! Ding, ding, ding!" But it's internal. It's asking yourself, "What is it about that experience that you want to read more about it?" It's that knowing that there's something happening there. It's listening to the internal movements.

What is it that fills you with passion? What is it that makes you fully alive? Sometimes, it's like going shopping and seeing all these wonderful things and thinking, "That's all fantastic, but why isn't that enough?" There's every reason why it should be, and yet it isn't. And then you find religious life and say, "I need to explore this."

We need to understand why a young woman would enter religious life today, especially when there's so many other options. There are so many service opportunities, and here in Philadelphia, there are a lot of dedicated young lay Catholics who are very involved, so there are even more options.

So why religious life? Sometimes we talk about community, and often that is a significant draw. I used to say that was the primary draw, but now there's community in other options, too. 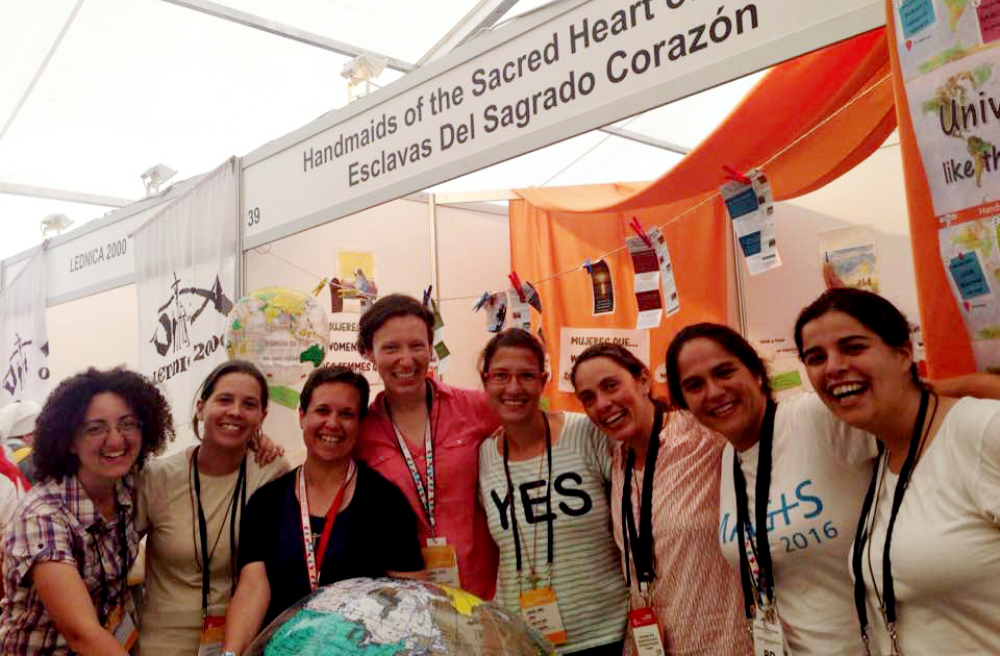 Sr. Jessica Kerber, fourth from left, with other Handmaids of the Sacred Heart of Jesus sisters during World Youth Day in Poland in July (provided photo)

It's finding that at that deepest level of self, there is this desire to give fully to God one's own being — all that you are — and finding a sense that this looks like religious life. It's a commitment to God and God's project, the project of salvation. It's asking, "What is this call that wouldn't even be fed by a huge commitment to a particular project?"

Recently, you gave a talk on "The Millennial Perspective on Consecrated Life in Today's Church." What is the millennial perspective? Is it — as statistics have shown — more orthodox or traditional? Or something else?

I would have agreed with that for a long time, that idea that for millennials, the accepted path is toward more religiosity, more conservative. But I don't think that's as true today.

One of the greatest needs now is to speak up and become one church. It's wrong in America to have a divided church as well as a divided political system. Because of diminishing numbers, there's more of a need to come together. I have a friend from another congregation, and we often talk about the similarity of our charisms, but also about the beauty of the differences and how God works in different ways.

Because of diminishing numbers of women religious, there's more of a need to come together, especially because it will be up to them: The young women, in discernment and in religious life, talk about diminishment in terms of "I don't know what will become of religious life" and "I know in my life, we'll see changes." But they aren't thinking they'll be part of the changes, and they will.

What about the vows? Do those scare women off? Or can they actually be a draw?

For me, the vow of poverty was the attractive thing — that's what drew me. It didn't feel off to me, it seemed like what everyone should want. So it's ironic that I live in a mansion now. [The St. Raphaela Center was once a 30-room private home.] But taking a vow of poverty didn't feel odd to me because that was what I longed for.

For me, even six years in, I worried about the vow of obedience, that fear of "What if I get placed in a field I don't like for the rest of my life?" I had to wrestle with that. It was a huge challenge for me. But what I would continually come back to in prayer was that somehow, my identity as a Handmaid and religious sister was contributing to the building of the kingdom in greater ways than I could imagine.

And now, being at the retreat center, it is this investment in knowledge in the major missions of our congregation, which is reparation. My job is all about how our mission is lived out in a retreat center, because it's not just about keeping it running. Others can do that better than I can. I'm not a business manager — no way should I be managing something. But the reason you have a Handmaid here is mission.

It's a beautiful gift to see other people in prayer. And I have to remember it is a retreat house, so while it's easy to keep running at my speed, my ministry is providing opportunities for people to encounter God, and that means I'm going to have to slow down a little bit.

*This story has been updated to correct Kerber's start date.