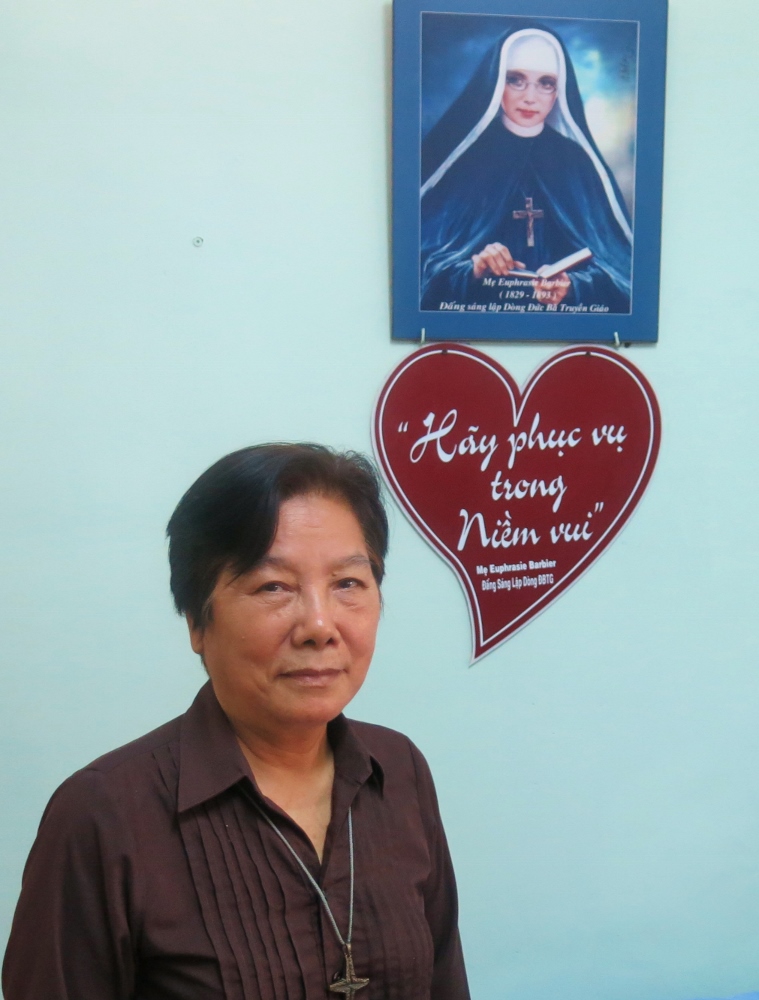 Sr. Mary Dominic Nguyen Thi Hao stands below the picture of Mother Euphrasie Barbier, foundress of her community, the Congregation of Our Lady of the Missions. (Joachim Pham)

Ho Chi Minh City, Vietnam — Sr. Mary Dominic Nguyen Thi Hao of the Congregation of Our Lady of the Missions has cared for sex workers in Ho Chi Minh City for 10 years. Her ministry focuses more on teaching about disease prevention than lecturing on moral lessons, since the women tend to be poor and uneducated.

Hao, 73, also performs pro-life work by setting up houses for women experiencing unwanted pregnancies to live under her support until they give birth.

Vietnam deems prostitution illegal and makes sex workers subject to fines of up to U.S. $230 if they are caught. Government statistics report 32,700 active sex workers and found that almost half of the women involved have suffered violence.

Civil society groups have pressured the government to legalize prostitution so that the industry can be regulated and the workers better protected.

How did you begin working in street ministry with sex workers?

In the 1990s, I found that many teenage girls from the southern provinces in the Mekong Delta were seeking manual jobs like housework or sales in the city to support their families and their brothers’ studies. But few of them could get jobs, and most others were enticed to work in bordellos. Even some ‘madams,’ women who ran brothels, happened to be Catholics.

I felt sorry to see many of them standing on streets and bridges to call out to clients. They should have been with their families, studying at schools and enjoying time with their friends.

My provincial superior asked me to help a New Zealand nun who worked with women at rehabilitation centers, but I declined because I was a teacher and had no knowledge of social work and prostitution.

At that time I was teaching 18 girls from the northern provinces who wanted to be nuns at a house in the city. Running water at the house had been interrupted for months, although nearby houses had it.

I prayed that if God wanted me to work with sex workers, he would send me a sign.

Before long, a man brought a young girl who was in wheelchair and asked me to help her go to confession to celebrate Easter. She was a sex worker and led a group of other prostitutes who used wheelchairs.

After I decided to work with sex workers, running water resumed coming to the house. I believe that my ministry was sent by providence.

I spent months studying prostitution, sexually transmitted diseases and their prevention and other things.

What did you do to support sex workers?

At first I went out to streets alone in the evenings to make friends with them. I told some, ‘You look beautiful,’ and they cursed me as being bad luck and drove me away.

I tried talking to them about their work and the risks of diseases like HIV/AIDS and syphilis, and saw to it that they knew how to protect themselves. Some listened to me while others suspected me of being with the police.

I taught the women how to protect themselves from being abused and suffering diseases, and took them to doctors for treatment. I also introduced some female doctors to the women.

The nun from New Zealand asked for female condoms from organizations, and I gave them to the sex workers. I was really ashamed to talk about condoms — and I did not know how to use them — so I invited an old doctor to teach them how to do it.

Later some sex workers asked me, ‘Are you a nun?’

‘Why do you ask me that question?’ I said.

‘People disrespect us, but you love, respect and teach us good things,’ was their answer.

The started gathering and saying loudly on the streets: ‘Sister! Please give me condoms.’ My visitors were surprised to see a lot of condoms in my room.

Besides that, I provided accommodation and vocational skills like cooking, hairdressing, sewing clothes and other skills the women liked. They were given jobs too, so that they could avoid returning to their old work. Some pursued their studies and finished high school.

I also entered bordellos and rescued sex workers from there. Although I was threatened by gangsters, I tried to hide women in houses and hospitals and sent them home when gangsters tried to catch them again.

More than 100 women were rescued from prostitution between 1997 and 2008, when the government cracked down on sex workers in the city. Then women had to travel by boat, motorbike and taxi and to work in hotels, so I was not able to approach them.

Many [of the rescued women] returned to living a good life and got married. I have been invited to celebrate their weddings.

Yes, they were a lot. It was hard to rent houses as shelters for sex workers because people do not want to live near the women. Many times we hid the women away when the police checked our houses. One time, we hired a house owned by a policeman, who protected us.

A priest asked me, ‘Why do you work with these women? You have nothing [else] to do?’ and a pastor told me that, ‘The church does not allow people to use condoms.’

I told them that my main aim was to care for the women because they were poor and uneducated and had no idea of how to protect themselves from diseases. In addition, they themselves chose their work. They needed to look after their health. In any case I could help them avoid the worst. It was far better to make them aware of the risks they were taking than to teach them moral lessons that they found difficult to accept or to send them to rehabilitation centers.

I did not encourage young couples to use condoms.

What about pro-life activities?

We set up three houses for women with unwanted pregnancies and their children. We offer them accommodation, food, health services and hospital fees so that they can be safely delivered of their babies. We require them to bring up their children. They learn moral values, vocational skills and good behaviors too.

Some heads of parish councils make their daughters who have unplanned pregnancies get abortions because they are ashamed of their children’s pregnancy. We encourage them to respect life that is from God and work with us to take care of mothers and babies.

What is the motivation behind your activities?

My main motivation is from the heart — loving, sympathizing and listening to people in need who do not dare to talk with others. God prepares me and tells me what to do in creative ways. Human beings are imperfect and do nothing.

Our founding mother said before we embark on our mission, we have to pray with God and listen to God’s plans. The Holy Spirit encourages and leads us to do his work.

Catholic sisters among those embracing international efforts against human trafficking

Q & A with Sr. Simone Campbell on her year since leaving Network

Q & A with Sr. Linda Roby: The richness of the Deaf Catholic community