Simmons is the president of Australian Catholic Religious Against Trafficking in Humans (ACRATH), which is among the many networks of sisters around the globe that combat human trafficking. Along with giving presentations that raise awareness of trafficking throughout communities, Simmons said the organization plans annual visits to Parliament to discuss trafficking with its members and accompanies survivors of trafficking and advocates for their legal rights.

In a conversation with Global Sisters Report, Simmons discussed trafficking common to her country and progress made thanks to ACRATH's advocacy.

GSR: Tell me about human trafficking specific to Australia. What kind of environment is conducive to it?

Simmons: When I started working with ACRATH [in 2010], whenever I said to people that I worked on human trafficking, they tended to think that's people coming in on boats and being smuggled into the country, or people assumed it was women being trafficked into brothels. While there are certainly instances of that in Australia, that tends to happen more in the larger cities. But forced labor in agriculture and hospitality is an Australia-wide phenomenon: It's in rural areas, urban areas, and in the capital cities throughout Australia.

The other issue that is also growing in prevalence is forced marriage: women being brought into the country and forced to marry, young women of ethnic origins who had been residents here in Australia and perhaps have become citizens being forced to marry here in Australia. We've also been engaged with some women indirectly who have been taken back to their countries of origin by their parents, left there to marry somebody, and their parents come back with their passports. Basically, we've been working on raising awareness for that and trying to make sure that people who are in forced marriages know that there is hope for them.

We've also been funded by the government to develop educational materials for schools on the issue of forced marriage. We're really keen that teachers, principals, school counselors know what to do if they become aware of a student in their class or school who has been forced into marriage or is in danger of a forced marriage. In terms of indicators, it might be if a student is suddenly performing poorly when they've been a good student, or if there's a lot of absenteeism, or awareness that an older sister has been forced into marriage, loss of concentration. Those can be indicators of other things, as well, but they are things that should raise red flags and have teachers and counselors try to work out what is behind this changing behavior.

It's been around for a long time, but perhaps we didn't have the understanding or the name to put on the situation and bring it into the fore. Statistics have only been kept on it since about 2013, when it was added to the Australian criminal code, and it makes up one-third of our human trafficking cases.

Tell me about legal battles against trafficking.

We've been concerned recently that there have been raids on agricultural properties by federal police, and that people who don't have valid visas or passports with them are automatically assumed to be visa over-stayers and are put into immigration detention and deported. That concerns us because we believe there needs to be time taken to find out why they're in Australia without their visas. Have their visas been confiscated?

One time, someone said to me, "Well, they came voluntarily." But many trafficking victims do come voluntarily because of glowing reports they've been given of what life is like in another place. There needs to be time for a person who's been in a traumatic situation to build that trust and be able to talk freely about what's happened. When they're first discovered, they're traumatized, frightened people, so we've got concerns with the way they're dealt with in Australia and believe there are more people who experience forced labor than what the statistics show. One case in Australia was over 100 people that were removed within a matter of days. What's the real story behind that?

We're trying to get the government to introduce a national compensation plan for people who have been trafficked in Australia, not because we want these people to get handouts, but because we want them to have the resources they need to take up life and not be in danger of being re-trafficked. Part of the compensation might be the money for them to be able to do some skills training so they can be employable. It doesn't have to be money; it can be services, as well.

What examples come to mind that illustrate the good work ACRATH does?

The Red Cross in Australia provides case workers and might approach us to companion a woman, man or child, which could mean we accompany them to medical appointments if they want, or we can take them for coffee and social contact.

Also, through our advocacy and in collaboration with other NGOs, we've advocated with the government to change the name of the visas that trafficked people are put on. Initially, their visas were called a "criminal justice visa," which is the same visa for a person who commits a crime in Australia who doesn't have a visa but has to stay in jail — so it wasn't doing anything for their self-esteem to have a visa that says "criminal."

By putting them on a visa that was only for trafficked people, services could be attached to that visa. Last year, after about five years of advocacy, that got changed. It's now called a Bridging F Visa, and it's only for trafficked people. By having a separate visa, they don't have to go to a landlord looking for accommodation with a criminal visa.

How has this work affected your personal growth and perspective as a woman religious?

It's given me a greater awareness of human rights that people have been denied and has built up in me a passion to fight more for human rights of people. I've also really appreciated the fact that ACRATH is an organization that is made up of religious from various congregations, male and female, priests, and also laypeople. That partnership I find very energizing. When someone is struggling, there's always someone else who is feeling buoyant who can carry them.

I'm the Oceania representative in Talitha Kum, and meeting some of the people in other countries working on that has been very enlightening. I remember going to a conference in Thailand a few years ago. I was asked to give a paper, and I thought, "My goodness, these people are working directly with trafficked people every day. Who am I to be talking to them?" But when I arrived, they said, "Oh, it must be so hard to work on human trafficking in a destination country!" The different approaches we have, but together, we're all making a difference, complementing one another — that energized me, and I appreciate the connection we share. 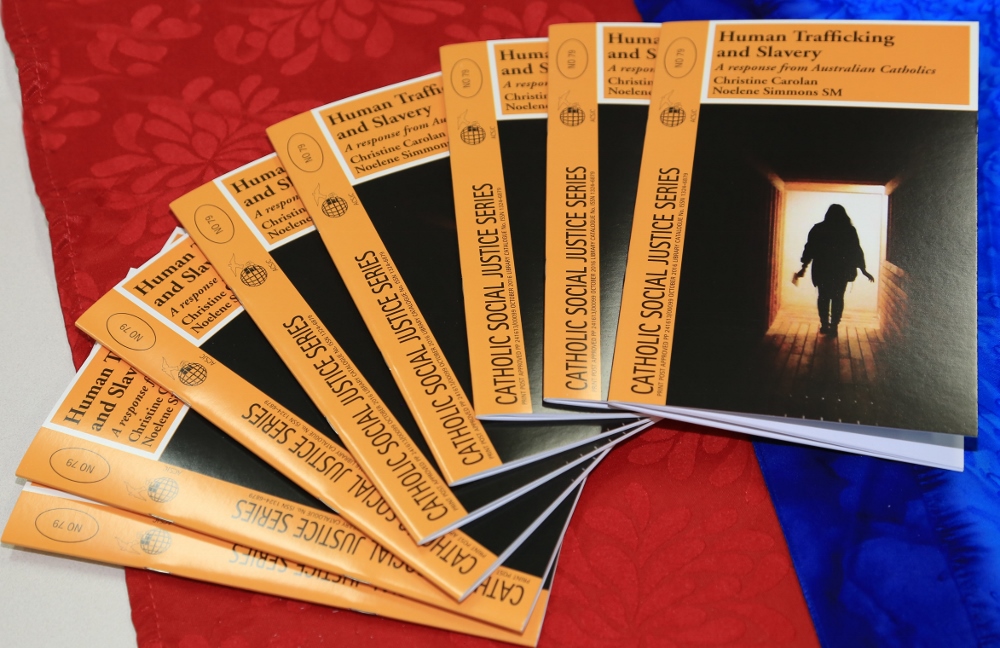