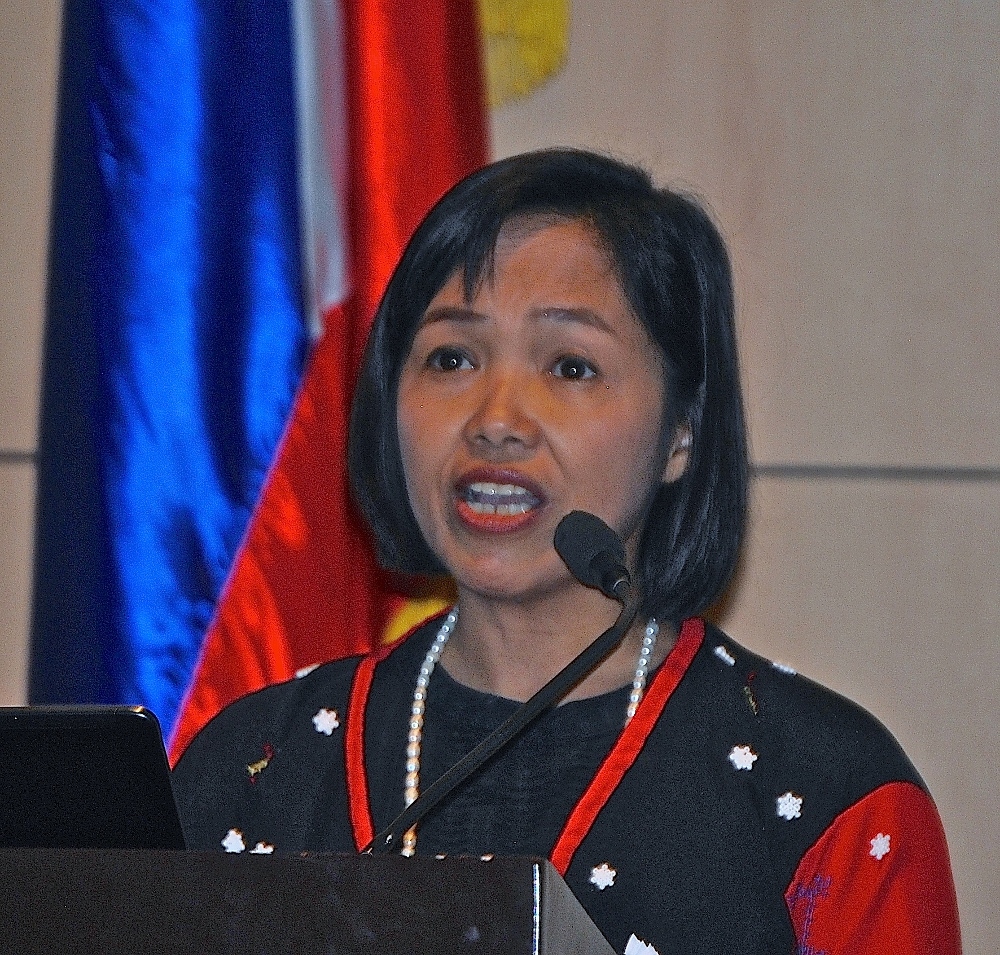 Theologian Agnes Brazal presents her paper "Gender Roles in the Context of Feminization of Migration: Challenge to Papal Teachings?" at the Symposium on the Filipino Family at Ateneo de Manila University on Sept. 13. (N.J. Viehland)

Quezon City, Philippines — Women theologians in Asia have been sustaining the process of reflection and dialogue on feminist issues and concerns through conferences, symposia, artistic exhibits and publications.

Out of this movement came an association of theologians called Ecclesia of Women in Asia (EWA) that formed 12 years ago. Theologian Agnes Brazal, director of the Office for Research and Publications and coordinator of the graduate program at St. Vincent School of Theology in Quezon City was a member of EWA from its start and has served as joint treasurer since 2005.

The association is calling for papers and presentations for its Seventh Biennial Conference in Manila in January 2016. The conference will be the association’s first under Pope Francis, who has issued a call to make room for a more incisive role for women in the church.

Brazal described the founding of Ecclesia of Women and the importance of feminist voices.

Why was the Ecclesia of Women in Asia established?

From the beginning its aim is to make Catholic Asian women theologians’ voices heard as equal partners in the church. It was formed in 2002 about a year after the post-synodal conference in India, when only four women theologians were involved in reflecting on the document Ecclesia in Asia. There were already many women theologians at that time, but they were not visible. From the start, EWA has gathered people doing academic, pastoral and grassroots theology, and hoped that the relationship would be synergistic.

What concretely was the group supposed to do?

We decided that our focus would be on encouraging research, because that seems to be what is lacking in Asia. Then we clarified what kind of research is needed: enculturated and contextualized in Asian realities, grounded in the spiritual praxis of the poor, promotes mutuality and integrity of creation; and dialogues with other disciplines, religions/faiths. Initially it wasn't also clear: Are we a feminist group or not? Later we agreed to identify ourselves as a feminist group.

In 2014, we became a member of INSeCT, the International Network of Societies in Catholic Theology. There is a clear movement in EWA toward strengthening our global visibility and international linkages. Actually we are the only continental-wide association of Catholic women theologians.

Why is a continent-wide association important? What need does it answer?

As a continent-wide association of Catholic women theologians, we hope to be a dialogue partner in the Asian church.

The presence of representatives from theologians’ associations as consultants in regional episcopal conferences or as participants in dialogues with bishops, would be a significant step toward systematically providing a space for conversation between women’s theological societies and the hierarchy. As a continent-wide association, we can also collectively engage the issues within Asia through our publications.

What is the situation of professional theologians in Asia?

There are more than 110 professional Asian women theologians. These are women who hold doctorates in sacred theology (STh.D.) or a Ph.D. in theology, religious studies, Christian studies or applied theology or a Doctorate in Ministry. The actual number is definitely greater because many are “invisible” – even theologians from their own countries do not know who they are and what they are currently doing. Very few get employed in theological school or seminaries.

What are future prospects for EWA?

One possible direction is for the members to either organize a local EWA in their countries or link with already existing women theologians’ group. In Myanmar in 2005, EWA facilitated the organization of MEWA – Myanmar Eclesia of Women in Asia. In the Philippines EWA initiated a collaboration with the Catholic women in EATWOT (Ecumenical Association of Third World Theologians). Our forthcoming publication, Roots and Routes: Catholic Feminism in the Philippines, is a collection of essays discussing the sources, development, and impact of Catholic feminism and feminist theologizing in the Philippines.

India has its Indian Women Theologians Forum and Korea has its Association of Catholic Korean Women Theologians. In the future, maybe EWA can also have organizations as members or as associates/collaborators, so we can speak collectively especially now that Pope Francis is calling for a conversation on the role of women in the church.

What is at the core of the word feminist and it’s implication for theology?

A feminist is one who is aware of the oppression of women, both in the church and society, and exerts effort to transform the situation. If there is no oppression/marginalization of women, there is no need for feminism and for EWA. So it is not necessarily fully positive that EWA exists, although at the moment it provides women wanting to transform a patriarchal church and society a support system.

How has Pope Francis impacted the progress and direction of EWA?

Our call for papers for the 2016 conference is on the theme “The 21st Century Woman Still Claiming Her Space: Asian Feminist Theological Perspectives.” as part of our collaboration with INSeCT, some of our papers will be reflecting on sections 103 and 104 of Evangelii Gaudium that call for “the feminine genius” to be present “in the various other settings where important decisions are made, both in the Church and in social structures.” Francis has said that he recognizes that women share pastoral responsibilities with priests, but beyond that, how else can women be present?

We learned, for example, that there are women theologians in Asia, who are teaching without pay until they get tenured. Maybe some institutes feel at least they're giving the women a chance to teach theology because otherwise, they would not be hired since preference will be given to the men. If the Pope is serious about expanding the role of women, he must institute gender mainstreaming in the church on all levels, and in particular, within theological institutions. Every theological school, for a start, should have at least one full-time woman theologian. It's not so for most theological schools, even in the Philippines. If there are women, they serve as co-formators, not as professors of theology.

What is the situation of students?

In India, Fr. Arulsevalm Rayappan notes that even if the religious sisters outnumber the priests four times, the number of those who have specialized in the ecclesiastical sciences is almost insignificant.

As for future clergy, the 2004 Benchmark Survey of Philippine Seminaries shows that though seminarians no longer believe in the natural inequality of women and men: “Almost half of respondents (44.8 percent) are undecided or gave no response when asked to describe their relations with females who are involved in their training.” They are likewise “undecided” or “gave no response” when queried about the equality of men and women in assuming leadership position in church organizations. They ranked women and gender issues as among the least of their concerns.

What are main features of the 21st century context for theology and feminism?

The 21st-century context for theology and feminism includes the increasing gap between rich and poor in the context of global capitalism; the ubiquity of cybertechnologies, climate change and ecological justice; sexual revolution and the LGBTQ; new forms of family – single mothers, mixed marriage, same-sex partnerships; rethinking theological anthropology in the light of new findings in neurology; the city in the context of rapid urbanization; inter-ethnic conflicts and inter-religious dialogue; and Pope Francis' call for greater participation of women in the church and in society.

What is the significance of Francis’ recent appointment of women to the International Theological Commission?

The new appointees are good theologians representing one theological perspective on women. Pope Francis may have been doing a “balancing act” in other areas, but these appointments do not show a balance of mixed perspectives, which is necessary for healthy debate, especially on issues affecting women. Furthermore, there is nobody among the women from the Global South – Latin America, Africa and Asia.

How about theological schools: Are you satisfied with moves to include feminist theology in the curriculum?

The inclusion of a course on feminist theology or women in theology is a structural step forward. However, ideally, the feminist perspective should be integrated in all subjects. Toward this end, the vision/mission of the school should clearly explicate this thrust.

What are challenges EWA faces, and how do you deal with these?

Religious fundamentalism, which has gained strength in the last decade, partly due to a backlash on feminism, poses a threat to the development of women theologians. Even fundamentalism in dominant non-Christian religions in other Asian countries can have the effect of reinforcing clericalism within the church. Clericalism, though not necessarily arising from religious fundamentalism, confines the role of leadership and theologizing in the church to the “all boys club.” While Pope Francis had preached against clericalism, it is a question whether others are following suit. Continued consciousness-raising through our conferences, publications, as well as through dialogue with church leaders are EWA’s ways of facing these challenges.

[N.J. Viehland is a correspondent for  Global Sisters Report based in the Philippines.]

Q & A with Sr. Marcia Kay LaCour, sharing the Gospel in contemplative life