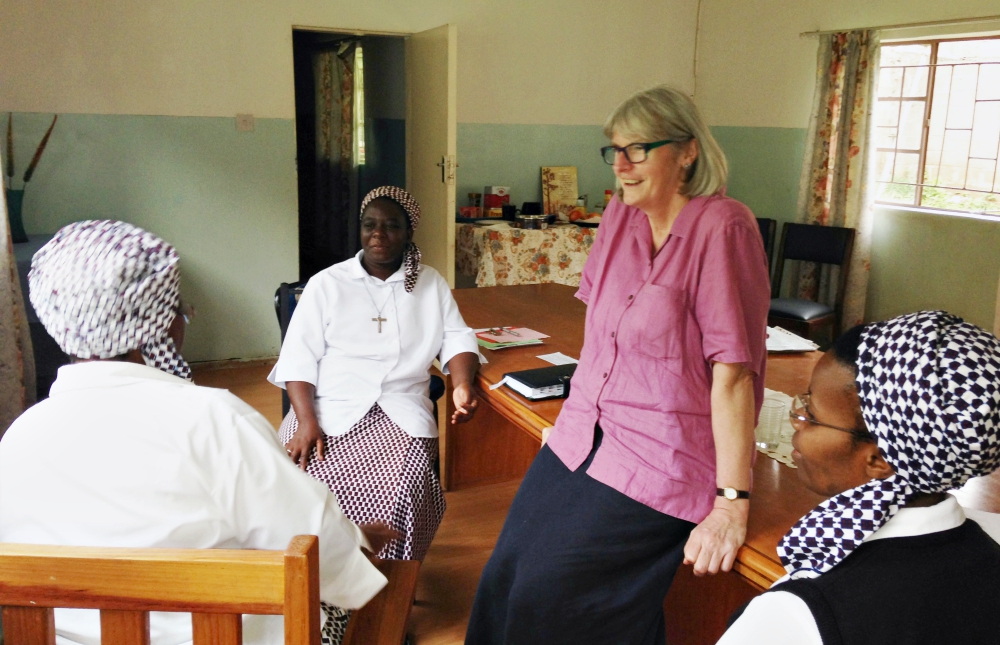 Dar es Salaam, Tanzania — Catherine Sexton was in formation to be a sister, but it didn't work out. Now she researches sisters, helping them have conversations about their own theology to better understand what drives them spiritually.

Sexton, who is based at the Margaret Beaufort Institute of Theology in Cambridge, England, is carrying out the research with a three-year grant from the Conrad N. Hilton Foundation, which also funds Global Sisters Report.

GSR caught up with Sexton while she was in Dar es Salaam, Tanzania, for the Association of Consecrated Women of East and Central Africa (ACWECA) conference in August. She talked with GSR about how research can energize theology and empowerment.

GSR: How did you first get involved in this kind of research?

Sexton: We started with our Religious Life Vitality project in the United Kingdom and Ireland. We were given a grant to work on that from 2012 to 2015. It wasn't conventional research. We asked sisters to give five examples of where they see vitality. Then we pulled it together and analyzed theological themes. We asked congregations to have discussions to deepen the findings.

The research took place in the context of what was going on in the United States, of the apostolic visitation and the investigations into LCWR. So this reframed the discourse away from sisters' adherence or not to church teachings and moved the focus to what is good and flourishing in religious life.

We found sisters in congregations with no young sisters coming after them were not able to do their traditional ministries, but they were finding a lot of hope and challenges in their new context. For example, the Medical Missionaries of Mary was a missionary congregation that was set up to be doctors and nurses — they were the first sisters who became doctors in the 1920s. The focus of their religious life was outward, but now [in Ireland] they are all in their 80s or older, and they understand their ministry is quite different. The caring that they're doing is for each other. That's the focus of their ministry, the focus of their hope. They've found a new sense of meaning in the context of caring for each other.

How will you carry out the research in Africa?

Before we started researching, we did a year of consultations. We had to figure out how to approach this research because we're white, we're outsiders, and we're not religious.

During our year of consultations, we talked to sisters about vitality. But vitality means something different in the African context. If we talked about vitality, the focus would all be on young sisters and numbers, which has been studied. We talked to sisters in Kenya, Tanzania, Uganda, Zambia and Malawi, which are the countries we'll be working in, plus possibly Sudan and South Sudan. We spoke with the secretaries of national associations, ACWECA leaders, sisters who had done Ph.D.s and ASEC [African Sisters Education Collaborative] for the consultation. 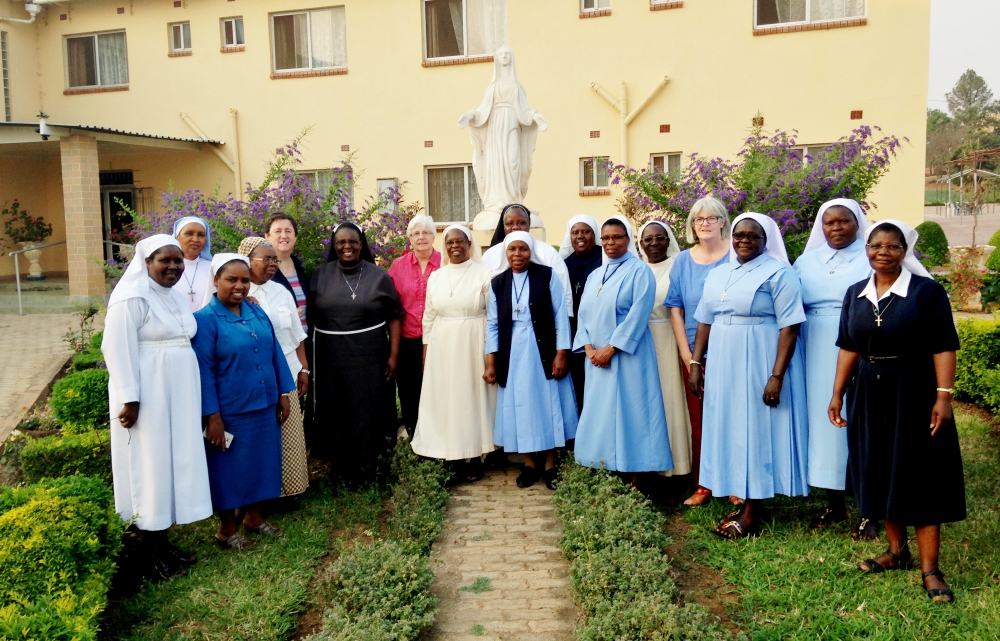 Catherine Sexton's research team carried out a year of consultations to explain the purpose of the research before it began collecting data. Here, the research team, including Sexton, representatives of the African Sisters Education Collaborative, the Union of International Superior Generals, and national leaders, meets in Kasisi, Zambia, in 2016. (Courtesy of Catherine Sexton)

What's the question you'll be asking sisters in Africa?

Who has joined the project so far?

So far, we've got a total of 51 congregations in four countries with 380 sisters. We just started in Malawi. We have 12 congregations, and one congregation wants to enroll 200 sisters in one go. The national associations are really strong there, and the English is best.

We've been quite dependent on the goodwill of the national associations. We're doing this as outsiders, and we want them to have a sense of ownership. There's no money involved in it for them. If they get anything out of it, it must be because they understand it's for them to revitalize their own religious life. Quite early on, the sisters in the national associations grabbed it and said, "OK, we understand."

We have project-support assistants in each country, but they're only part-time. They become the face of the project on the ground. They explain the project, hassle the participants on WhatsApp and on the phone. We have four in place now.

Why is it important to have this conversation with sisters in Africa?

Religious life in this part of Africa is in a large part about service delivery, providing services that the government isn't. Many are locked into service delivery. In the West, they were locked out of that, either by changing demographics, demands for qualifications, or Vatican II. This motivated them to come out of the institutions and live in a different way. That will happen in these contexts, but it will be slower. 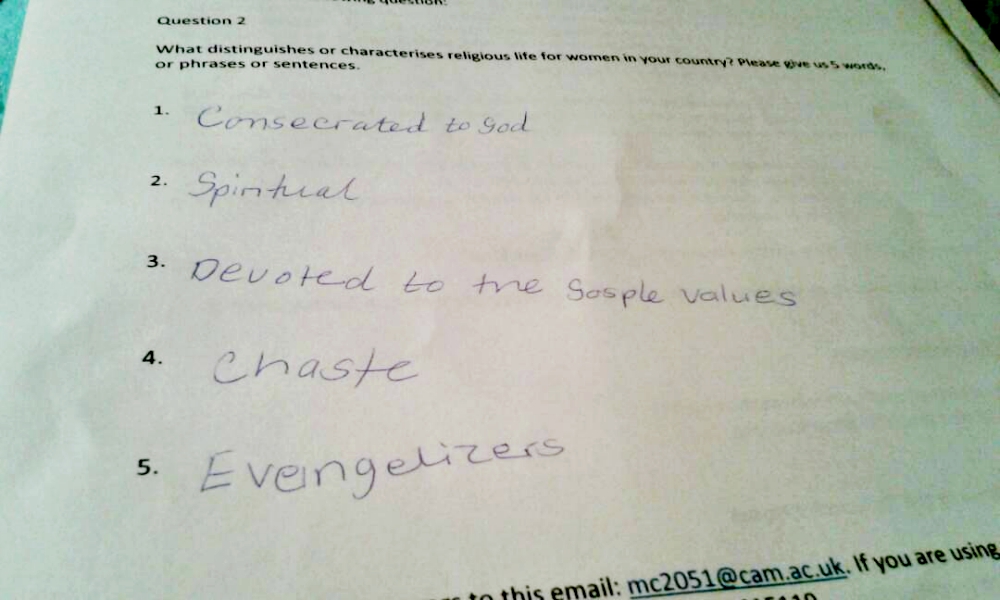 A participant's worksheet, part of a brainstorming session on characteristics of religious life (Courtesy of María Calderón Muñoz).

If you have sisters who are locked into service delivery, sometimes they don't know who they are. For example, now, congregations are starting to have a generation of older sisters, sisters who have retired from their main ministry. When they've been in the congregation, it's all about work. They get to this stage where they have to stop working, and they have nothing to feed themselves spiritually. Sisters are so focused on activities, on their orphanages, agricultural projects or running the congregation, I don't think they take a lot of time to have these conversations and reflections with one another.

We're expecting to get a lot of espoused theology, which is what we want to challenge sisters to talk about in the discussion groups.

Have you had challenges?

We have to spend a lot of time in conversation with the sisters. We need to sell the project. I thought that once we had the consultations and a group of sisters saw a need for this project, they would own it and sell it. That didn't happen. The superiors came back with a lot of questions. We have a whole day of consultations, and still some sisters go back to their congregations and don't really know how to explain it.

They worry we'll produce a report, and they won't see it, and we'll take it to white men somewhere who will see it, and who knows what they'll do with it. We have to give a copy of the report to Hilton, but actually, the report is for sisters. We want to produce something that goes back to them, that we will discuss with them. It's a theological reflection.

Tell me about what it's like to be involved in a study that doesn't have set parameters or hard data.

For me, this is about theology. It's not going to produce a set of recommendations or any money. But what it is going to do is tell sisters, "You have a theological voice."

Most of the writing and thinking about the theology of religious life in English is done in North America and Europe, mostly by men and some female academics. I'm not criticizing this; it's just the result of developed network of higher Catholic education in America and Europe. 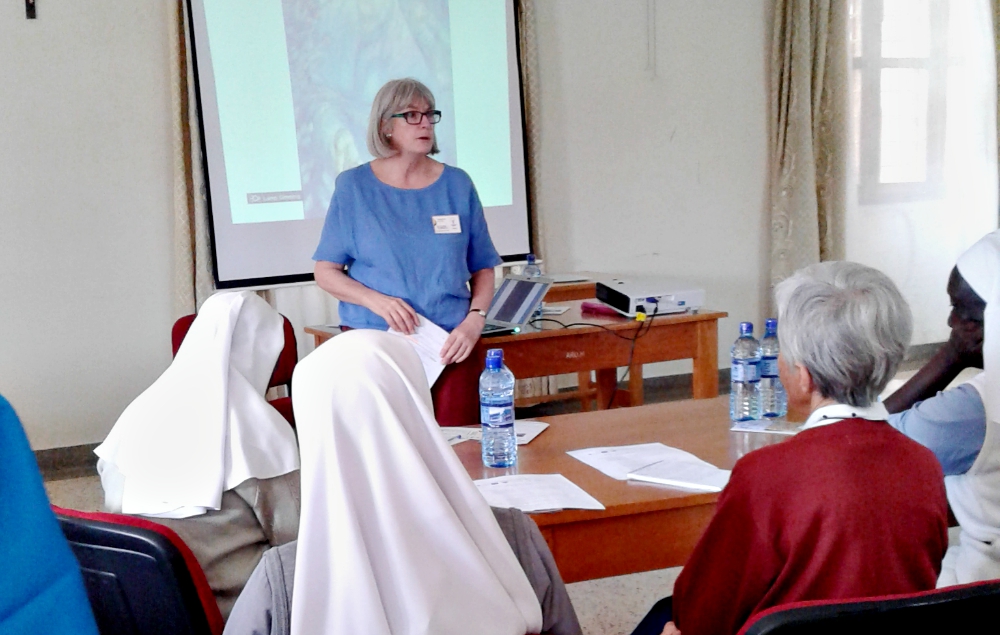 Catherine Sexton leads a workshop about the project at the Association for Religious Uganda campus in Kampala, Uganda. Sisters in Uganda and Kenya were the quickest to embrace the research because of strong national associations and widespread English. (Courtesy of Catherine Sexton)

We have a $900,000 grant for three years for this project and a follow-up to our project in the United Kingdom, and we are scheduled to finish in May 2019. It's a massive luxury and a huge, fantastic thing to be involved in. I understand about the urgent needs [of funding projects involved in service delivery], but this can make a long-term difference to the nature and quality of religious life.

You were in formation to become a sister yourself. Tell us about that.

I've tried religious life twice. [Sr.] Gemma [Simmonds, one of the research directors, along with María Calderón Muñoz] was my novice director at the Congregation of Jesus. I was with them for two years, then I left them to be a Cistercian sister, which is a monastic order in Wales. That didn't really work.

That was 10 years ago. I always say, the best way to make God laugh is to tell her your plans. That was my plan for what I wanted to do with myself, but it didn't work out.

Afterward, I worked for CAFOD [Catholic Agency for Overseas Development, Caritas' program in England and Wales] for eight years, and then I went to the Margaret Beaufort Institute of Theology in Cambridge to do a Ph.D. in practical theology. My research topic was about sisters and identity after they are no longer able to undertake active ministry.

A few years after I left the congregation, Gemma and I had a couple of glasses of wine and worked it all through. We had such different perspectives on [my time in formation], but I'm so grateful I had the opportunity to explore my vocation with that congregation. I always tell sisters about this. I don't hide it. When I tell them Gemma was my novice director, their eyes get really wide.

What I say is that it wasn't my calling to be a sister, but I really value the space of religious life in the church this way. And I'm being used in a much better way here than if I was a sister. 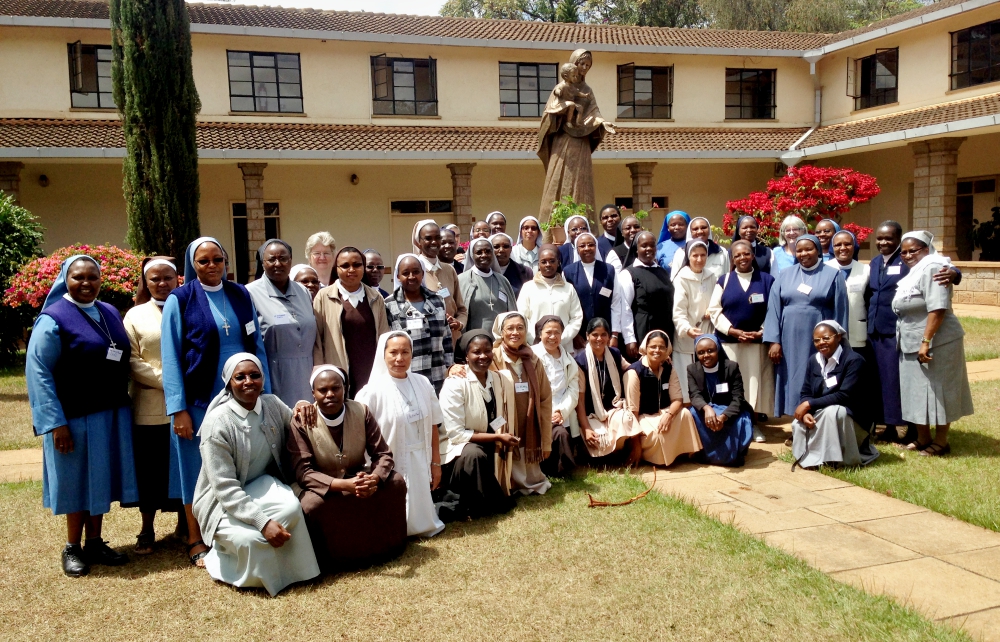 A workshop for sisters in Kenya to understand more about the project is conducted at the Dimesse Sister's House in Nairobi, Kenya. (Courtesy of Catherine Sexton)

Analysis of survey about Apostolic Visitation