Benedictine Sr. Marva Hoeckelman has been in daily communion with the weather for almost 10 years. As a volunteer observer for the U.S. National Weather Service, she and fellow sister Aurelia Palm record the temperature and rainfall each day at Mother of God Monastery in Watertown, South Dakota.

While the work is simple, it is profound. Hoeckelman, who also writes nature poetry, says weather observing is intrinsically linked to her spirituality.

Hoeckelman, who grew up in St. Louis, entered the monastery in 1991. For five years, she ministered as an elementary school teacher in Lincoln, Nebraska, before settling at the monastery in Watertown, where she has remained since, working primarily as a bookkeeper and archivist for the Benedictine Sisters Foundation of Watertown.

"I was really more interested in monastic life than being out on mission," she said.

Yet Hoeckelman says her choice to remain onsite at the monastery has actually expanded her individual impact tremendously. Each day, her input directly contributes to the system tracking the massive, ever-changing organism that is the nation's weather.

Hoeckelman spoke with Global Sisters Report over the phone about her weather-observing work.

GSR: You're a volunteer weather observer for the National Weather Service. What does that entail?

Hoeckelman: Along with another sister from my order, Sr. Aurelia Palm, we record the precipitation and temperature every day and submit our results to the National Weather Service. She does the outside stuff — precipitation — and I do the inside stuff, which is the temperature.

For the temperature, there's a sensor out in the yard and a cable buried in the lawn, which comes into our garage and connects to a computerized thermometer. It's a little box on the windowsill. There's a screen with digital numbers on the front, and each day, I record the present temperature and the lowest and highest temperature in the last 24 hours. It's very easy to read the thermometer. I just have to flip a few switches to get the high and low temperature and then clear them out. Then, I enter it in the National Weather Service website. I do that every day.

How did you get into this work?

Our community has a tradition of volunteerism. A good number of us volunteer, teaching catechism in the local parishes or other things. Tim Kearns of the National Weather Service was looking for a volunteer, and somebody suggested he call the monastery, so he called our public relations director. She was my boss at the time, and she asked me and Sister Aurelia. This was 2011. We said yes!

I have always had an interest in the weather anyway. I like to study the clouds and learn weather warnings. I think that's one of the reasons I was suggested for this position. "You're a nature person." My sisters have told me that.

Weather observing requires you stay at the monastery rather than go out and minster in the community. What has that choice been like for you?

It was my preference to stay. Mostly the community life is why. Our community is rather small compared to some. We are about 45 now, though when I entered in 1991, I was No. 100. So like most communities, we are experiencing diminishment. With going out and working on missions, given the size of our community, it's highly likely I would have had to live alone. That doesn't work so well when you're a monastic. I was living alone before I entered, as well, so it was a bit of "been there, done that." I knew they really needed someone to be here, too.

I'm curious what you think about global warming and about politics in light of climate change. Has this work engaged you politically, as well?

Well, I think global warming is definitely happening. I think it's happening very slowly and not in a straight line. The sisters talk about when they were kids, how they would have so much snow in the winter here in South Dakota, the house would be buried. That doesn't happen now. The last three winters were what I call "Missouri winters," where it would snow and then the snow would melt. Then this past winter reared back and really hit us hard. It was a rough winter, a lot of snow. That's what I mean when I say "not in a straight line."

I don't get into politics very much, but I can tell you the current president is not a friend of the environment. There are a lot of people out there who support [Donald] Trump because he's anti-abortion. I'm pro-life, too, but there is more than one issue to be concerned about when you go into the voting booth.

Does the weather observing feel like a contemplative act?

Some mornings, it's like, "Wow!" And we can't wait until after prayer to announce to everybody, for example, "We had 5 inches of snow!" During a recent blizzard, it was 25 inches. I feel like a messenger. It's a bit of a rush.

Is the weather observing connected to your spirituality in general?

It may be my spirituality. I don't know. In Benedictine spirituality, we talk about values, stewardship, taking care of the Earth. So this work fits right in.

Both Sister Aurelia and I are pretty well-connected with nature, anyway. We live in a beautiful area. For example, just about 1.5 miles from here is a 4,000-acre lake called Pelican Lake. We can see that from the monastery.

You also write nature poetry. Would you mind sharing one of your poems?

The bright morning sun studies
The early birds strolling down the walk.
The robin runs just ahead of the young executive,
Both of them dressed in their rust-vested brown suits
Out and about to get their worms. 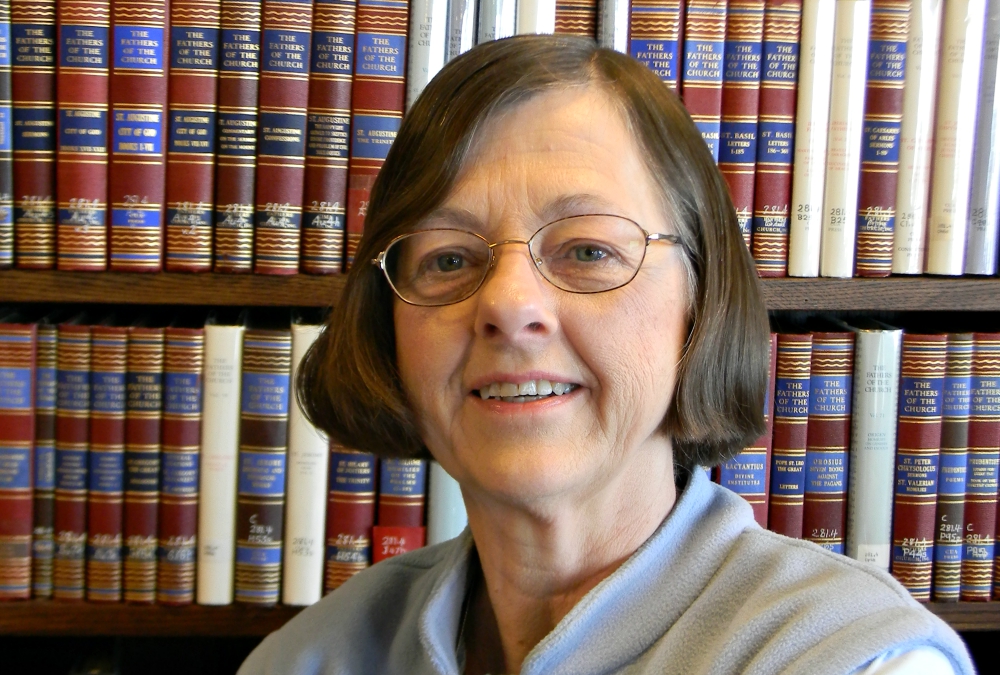