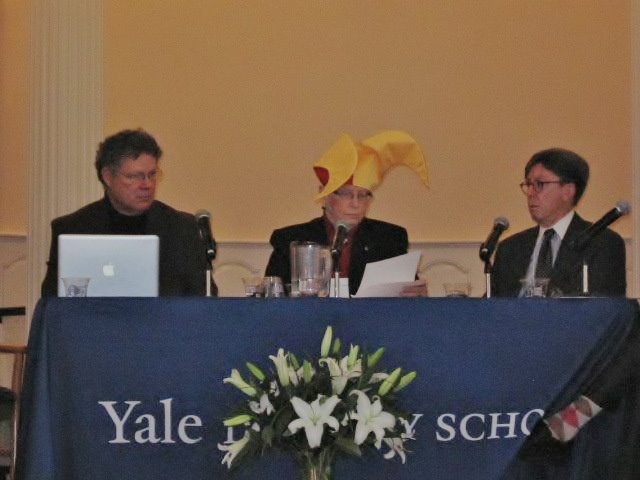 Sr. Patricia Siemen, Barry Law School, center, presents her talk while wearing a jester’s hat to represent how law must be turned upside down to address the rights of nature and the future. (Joan Brown)

In the Southwest marigolds herald El Día de Los Muertos celebrations and visits to cemeteries honoring the dead and conversing with the ancestors. The yellow flowers, known as cempazuchitl or “flower of the dead” adorn altars around All Soul’s Day and into November each year.

I was in the wake of the season of El Día de Los Muertos when I attended the Living Cosmology: Christian Responses to Journey of the Universe conference at Yale Divinity School, Nov. 7-9. When Sr. Miriam Therese McGillis, who was on a panel for Seeds, Food and Soil, brought forth baskets of drying marigolds to share with participants I was very moved and surprised. Miriam and the marigolds captured participants through her intimate sharing of her spiritual journey to embrace the sacred word of the book of nature at the tutelage of Fr. Thomas Berry.

She reflected that her love and amazement of the marigold – whose seeds know the 13 billion year history of the universe by heart – came with a price of letting go of many things in order to be transformed. Thomas Berry believed, “All human activities must be judged primarily by how they inhibit, foster or further seed.”

“Eating is the most intimate act with God,” Miriam reflected in her soulful presentation that left the attendees at the conference holding a very precious gift from this Dominican Sister who took a huge chance to put down the book of scriptures for a year to learn from the sacred book of nature.

The marigold was a perfect tribute to the ancestors of Pierre Teilhard de Chardin and Thomas Berry who were honored so eloquently throughout the conference by experts in various fields of theology, feminism, food, water, ethics and law. Using the Journey of the Universe as the springboard, panelists and attendees expanded the work of many ancestors as they grappled with probably the most important moral and spiritual challenge of our day – climate change and devastation of the planet, and why the Christian community at large is not addressing these concerns.

Sr. Chris Laughlin perhaps spoke most eloquently in one sentence the gift of the conference when she said we are part of a “compassionate time that enfolds itself in this moment in who we have become, who we are, rising and falling all of us together in fields of grace.”

Grace has carried many women religious through to this moment in the Journey of the Universe.  More than half a dozen women religious shared their knowledge and reflections in a variety of fields. Ilia Delio and Kathleen Duffy took the influence of Teilhard to the present moment and into the future. Janet Ruffing and Kathleen Deignan creatively explored Cosmological Spirituality. Lawyer Pat Siemen added a touch of feminine creativity with her jester’s hat as she shared a panel on law and the rights of nature and the new jurisprudence.

As I absorbed the weekend along with young and old and a number of other women religious, I felt washed in an unfolding future where a growth into oneness has its way. As Ilia said early in the conference, artificial separation is at the heart of the moral confusion we find ourselves in.

I wondered at our moral confusion, at the graying of our churches and reluctance to take personal and collective steps of courage into the future that is always evolving us into greater and greater complexity while holding us in grace. All of the presenters at this conference at one point or another risked a great deal to enter more deeply into the Journey of the Universe.

Perhaps Miriam’s sharing, which included the marigold, expressed the risk and letting go most poignantly. Letting go of theologies that no longer fit is painful but must happen if we are to unveil visions for an evolving Christianity. Letting go of lifestyles that do not honor food and water is painful. But as one Quaker presenter said, “Being open to grief and pain is a way of moving forward.”