To all gathered she said, "To see my people standing up for our rights, makes me so proud. Whenever I read about the water protectors at the camps along the Missouri and Cannonball Rivers, I pray they fight to the bitter end."

Words from this elder commending the brave commitment of her Standing Rock Sioux to protect their sacred lands and life-giving waters assured us it was right that we had come for two days to be in prayer with people in the camps protesting the Dakota Access Pipeline.

The proposed pipeline will be nearly 1,200 miles long and is designed to carry crude oil from western North Dakota to Illinois. The pipeline will cross or be drilled under just over 200 streams and rivers, including the mighty Missouri River — and it would cross near the Standing Rock Sioux Reservation lands. The estimated 4,000 protesters, known as water protectors, are asking that the pipeline company simply follow the National Environmental Policy Act, which requires an environmental impact study and a cost benefit analysis for projects like this.

We four sisters from Billings, Montana, were on a pilgrimage of mercy for climate justice at the Missouri River and Standing Rock Sioux land. We have ministered with Crow and Northern Cheyenne in Montana and Sioux in North Dakota, and as we traveled across the vast prairie to Standing Rock, our troubled souls were soothed by beauty. Hearts expanded. The two of us went with Franciscan Sr. Ann Marie Quinn, who is from Oldenburg, Indiana, and Franciscan Sr. Cecily Schroepfer from Rochester, Minnesota.

More than 300 flags representing the tribes and countries of the water protectors line the dusty road into the peaceful Oceti Sakowin (Seven Council Fires) Camp. We are pleased that our banner, "Nuns Standing with Standing Rock," is now snapping in the wind among them.

LaDonna Brave Bull Allard, founder-leader of the Sacred Stone Camp, asked us to pray the rosary. After we arrived, she directed us to gather around the fragrant sacred fire, burning continually since April. She walked through the camp inviting people to join us. Fifteen people came to sit around the fire.

As we prayed the Hail Marys, we invited people to reflect on a personal meaning of a story from the gospels about water. We began with Jesus' baptism in the River Jordan. People named and prayed for rivers in their home areas being devastated by violence and pollution. Meditation on the second mystery, living water, culminated with an older woman saying, "I have given birth to three children. I know living waters in my body." We were deeply moved by the sharing from young and old in the circle.

Later that day at the Seven Council Fires Camp, we witnessed hundreds of people led by the youth council peacefully marching in silence through a gauntlet of police cars to the bridge that blocks off the main highway to the Indian reservation. They marched in solidarity with the 141 water protectors who had been arrested for nonviolent resistance. As they walked by us, colorful ribbons, feathers, and banners flowing in wind, we felt the rush of a grateful Missouri River and recalled the teaching of a Crow elder, "In the end the river will remember who cared for her."

As the water protectors returned from their march and swept by us, we saw in action what LaDonna had told us earlier as we puzzled over why there was violent reaction to their prayer. "You're simply praying, just praying," Sr. Ann Schoth had said. LaDonna replied, "Prayer is powerful, which is why they attack us."

We experienced a peaceful atmosphere in both camps we visited. The water protectors were kind and friendly to us and to each other during our entire time among them. We visited camp schools, kitchens, dining areas, and quiet prayer circles around central fires. We talked with protectors from the Quixote Center, Veterans for Peace and reporters, as well as tribal council members and volunteers helping with cooking, cleanup, counseling, and construction of composting toilet outhouses, a central kitchen and small school.

The protectors have a simple request: Do the required environmental impact study. Move the Dakota Access Pipeline away from the Missouri River and other waterways that it endangers. During earlier development of the project there were multiple reroutes of the pipeline corridor, including around the capital city of Bismarck for various reasons: cultural, environmental, landowner concerns. It can be done. Just do the study required by law and move the pipeline away from the Missouri River!

We continue to stand with the water protectors. Srs. Cecily Schroepfer and Ann Schoch joined 60 people in a water protection demonstration in front of the Army Corps of Engineers Office in Billings on November 15, and Sr. Marya Grathwohl spoke about the issue to more than 100 sisters at their Motherhouse in Oldenburg, Indiana, urging them to join in prayer with people gathering in towns and cities worldwide in support of the Standing Rock water protectors. During their prayer service the sisters signed letters to Indiana Gov. (and Vice President-elect) Mike Pence asking him to withdraw law enforcement from Standing Rock.

Inspired by a 100-year-old Lakota Sioux woman, Therese Martin, we are committed to remaining in solidarity with the Standing Rock effort through prayer, advocacy, and nonviolent activism. Please pray with us and work to protect all water. Water is life!

[An Oldenburg Franciscan Sister since 1963, Marya Grathwohl lived for more than 30 years in African American, Crow and Northern Cheyenne communities, as teacher, principal and pastoral minister. She is the founding director of Earth Hope, and works in environmental restoration through farming, restoration and other ecology projects. Sr. Ann Schoch is a School Sister of Notre Dame from the Mankato, Minnesota, campus.] 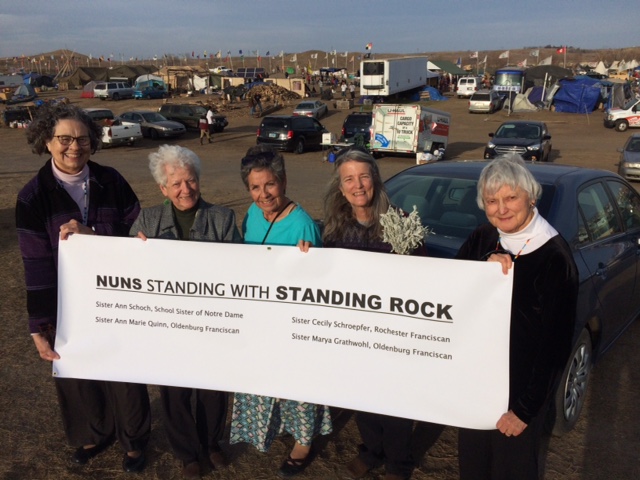 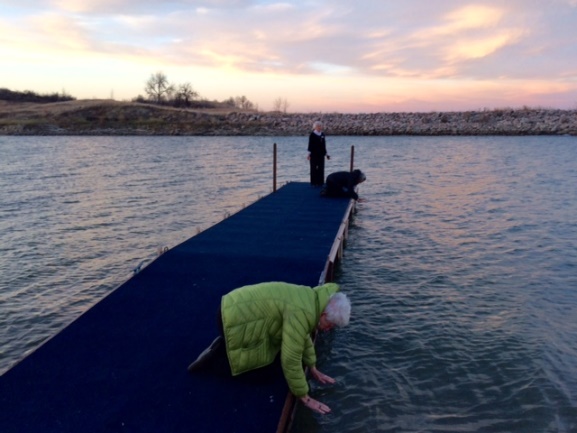