The Nuns on the Bus under the leadership of Social Service Sr. Simone Campbell came to St. Louis on Oct. 17, 2018, meeting at St. Alphonsus "Rock" Church, an African-American Catholic community celebrating diversity.

I remember the education I received as a "Nun on the Bus" in 2015, especially hearing the witness of five African-American mothers who shared their experience of raising sons in St. Louis. I can still feel the intensity of our conversation as they shared the fragility of their lives, and their insecurity and fear. Hearing their response to the question: "What is it like to raise a black son in St. Louis?" I recognized how little I knew about my African-American neighbors.

White mothers also share some of these concerns for their sons, cautioning them about how to speak to police and obey the laws. However, an African-American mother who is "having the conversation" with her son has a unique challenge: how to honor an expectation for fair play within a context of "uniformed" prejudice that can change lives with a glance, knowing the incarceration rate of African-Americans in the U.S. is rising. And when her son asked "When will this end?" a tearful mother answered, "Never."

The stories continued for two and half hours. With tears and expressions of sorrow, I left with a heavy heart, wondering how to cross the great divide that separates us.

The nearby city of Ferguson has become almost synonymous with racial bias: acknowledging "I'm from St. Louis," is often followed with, "How is your racial situation?" In writing this I'm exploring how I would answer at the time of this writing, in 2018.

Since 2015, I've read the Economic Policy Institute's evaluation of Ferguson. This "think tank" is ranked by some with National Public Radio, British Broadcasting Corporation, and America magazine as being "left of center" on many issues. Its 30-page report on "The Making of Ferguson" highlights the role of both federal and state government in devising laws to keep segregated communities in place through restrictive real estate options, poorer schools, and zoning that designates areas as industrial rather than residential. This results in numerous health hazards, a lack of mass transit, grocery stores and hospitals, and so much more. In several instances, African-American communities have gone to court and proven the malicious intent of such laws, often winning court cases but seeing little change in policy.

Recently, I told a friend — a nurse and a healing presence in my life for more than 10 years —that I planned to hike a trail in a state park 40 miles west of St. Louis. She surprised me by saying: "I'd love to do the same, but I wouldn't risk it, especially with my 17-year-old son. It's part of being black in Missouri."

Shock and sadness registered on my face. She said, "REI, an outdoor outfitting company, has recognized this fear on the part of people of color. They have trained African-American guides who offer hiking opportunities called Outdoor Afro."

I recognized racism through the experience of a friend whose profession is healing — but who lives within racial boundaries that restrict her life and that of her son. How little I understand the oppressive system of racism in my city and state!

Try to cross the divide existing in St. Louis, and imagine you are an African-American mother. Read this report by Alyssa Banford and Elizabeth Hines: "For the Sake of All."

Imagine your children … think about what you want for their future. Then your mind jumps back to the present: you are working two part-time jobs, parenting alone, have little time to read, talk or play with them.

You want to help them with their homework — and they need it — but you just don't have time.

They are home alone for extended periods of time — you can't afford a babysitter.

They stay with their Grandma sometimes, but she is unable to keep them every day.

When she does, she doesn't have the energy to entertain them and doesn't know how to help with homework.

You wish your children could just go out and play like you did, but the neighborhood isn't safe.

They are stuck indoors, often bored and inactive.

Money was short this week and what you brought home ran out quickly. You live in a "food desert," with few healthy options for dinner.

You can't afford a car; the nearest grocery store is a two-hour round trip on public transportation.

When your children are sick, relying on public transportation makes it almost impossible to see a doctor or afford medication. And more. …

According to the "For the Sake of All" study, this scenario is the reality for thousands across the St. Louis area.

What keeps this unjust system in place?

Exploring racism in St. Louis reminds me of the challenges Dr. Martin Luther King Jr. expressed in his eulogy for James Reeb, March 1965. Reeb was a white Unitarian minister killed in Selma. Dr. King's words speak to me of what I sense is the deeper context of our racial divide in St. Louis.

James Reeb was martyred in the Judeo-Christian faith that all men are brothers. His death was a result of a sensitive religious spirit. His crime was that he dared to live his faith: he placed himself alongside the disinherited black brethren of this community. … He was murdered by a few, sick, demented, and misguided men who have the strange notion that you express dissent through murder.

There is another haunting, poignant, desperate question we are forced to ask this afternoon. … It is the question, What killed James Reeb? When we move from the who to the what, the blame is wide and the responsibility grows.

So in his death, James Reeb says something to each of us, black and white alike – says that we must substitute courage for caution, says to us that we must be concerned not merely about who murdered him, but about the system, the way of life, the philosophy which produced the murder. His death says to us that we must work passionately, unrelentingly, to make the American dream a reality, so he did not die in vain…

I pray for courage more than caution. 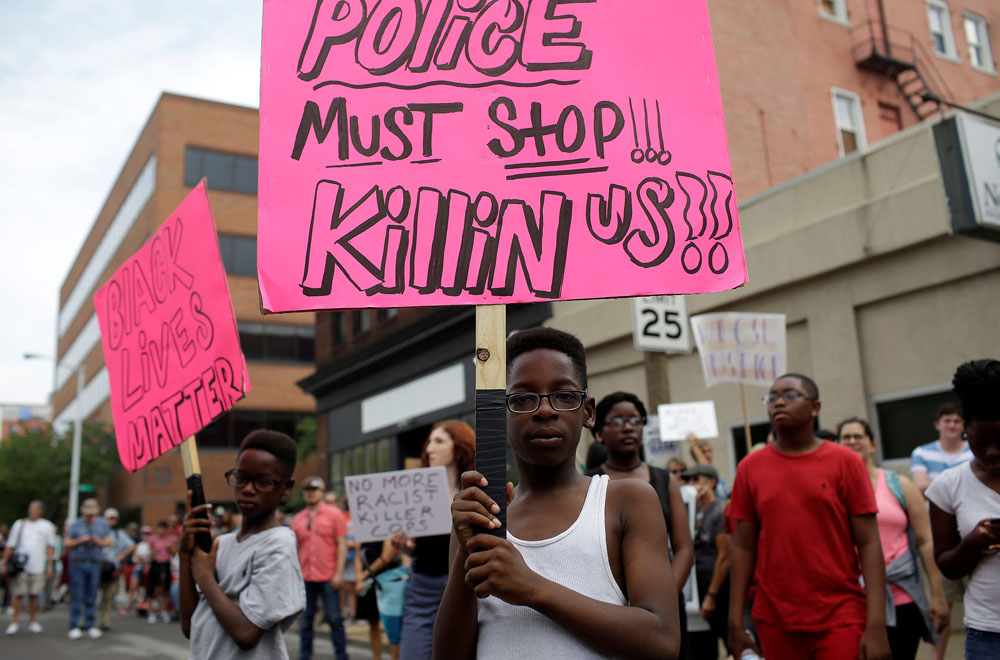