This pope gives me hope 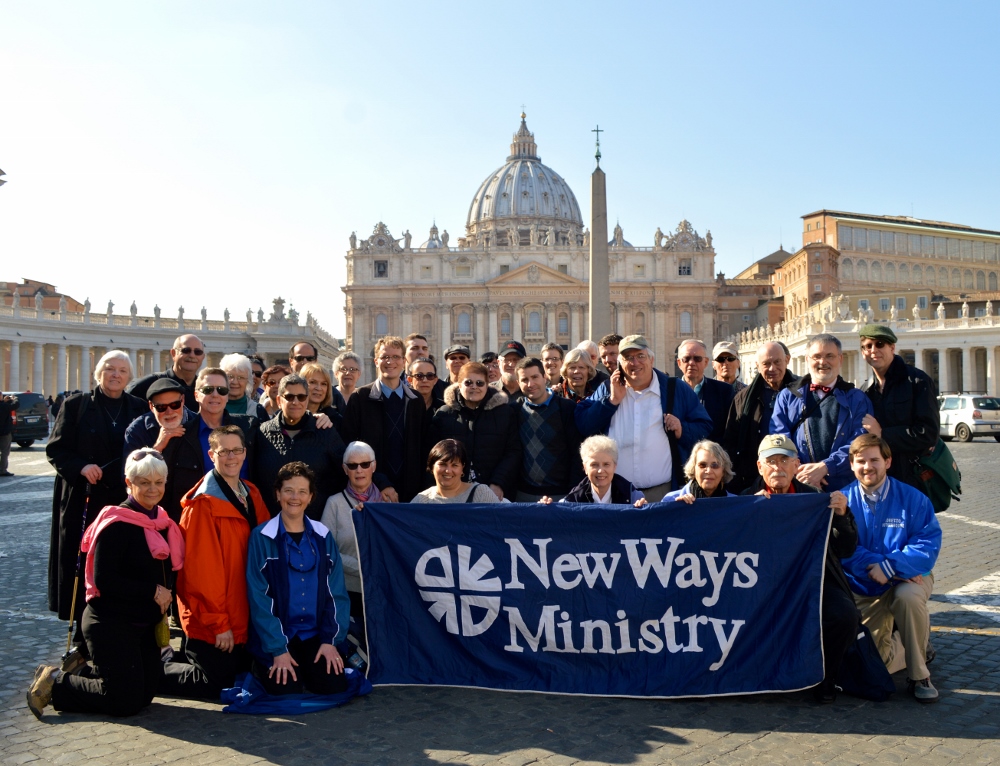 Pilgrims after audience at Vatican" shows our Forty-nine pilgrims came with New Ways Ministry to the Vatican. Here they are outside of St. Peter's Basilica after the crowd dispersed. (Gaia Meuti)

On my lap-top computer is a round decal with a blue and white picture of Pope Francis with the words, “This Pope gives me hope.” On my car, next to the bumper sticker that says, “Civil marriage is a civil right,” is another sticker: “I ♥ Pope Francis.”

I believe Pope Francis has a lot to learn about lesbian and gay people, about women and about sexuality and gender in general, but it seems to me that his past life shows he is humble enough to change his views. So I’m at ease, trusting that he is steering the bark of Peter in the right direction. I’m happy that the world leader of the church I grew up in, and the church I love, speaks of Jesus and the Gospel in the homespun style that Jesus used, instead of quoting some bland or restrictive pronouncements of his predecessors.

In February, I led a pilgrimage to Rome for lesbian and gay Catholics, parents, family members, and friends to see Pope Francis. Several months before we were to leave, I composed a respectful letter to the pope, introduced myself and asked him for a brief meeting, either after his general Wednesday audience, or at another time at his convenience. I mailed the letter in the U.S. post and kept hoping that Pope Francis would telephone, as he is wont to do. When I didn’t hear from him, I decided to enlist some help.

In December, Francis DeBernardo, the executive director at New Ways Ministry, and I had a very cordial meeting with Archbishop Salvatore Cordileone, who is known for his strong opposition to same-sex civil marriage. We knew where we disagreed, but we met to discuss areas of agreement. I suggested that his sending my letter of request to the Pope would be a common pastoral matter.

As I did not hear from Cordileone for more than a month, I approached my local bishop, Cardinal Donald Wuerl, in Washington, D.C. Because of the shortness of time before our departure to Rome, Cardinal Wuerl suggested that the letter be given to the Apostolic Nuncio, Archbishop Carlo Viganò, to send to the Pope, which I did. 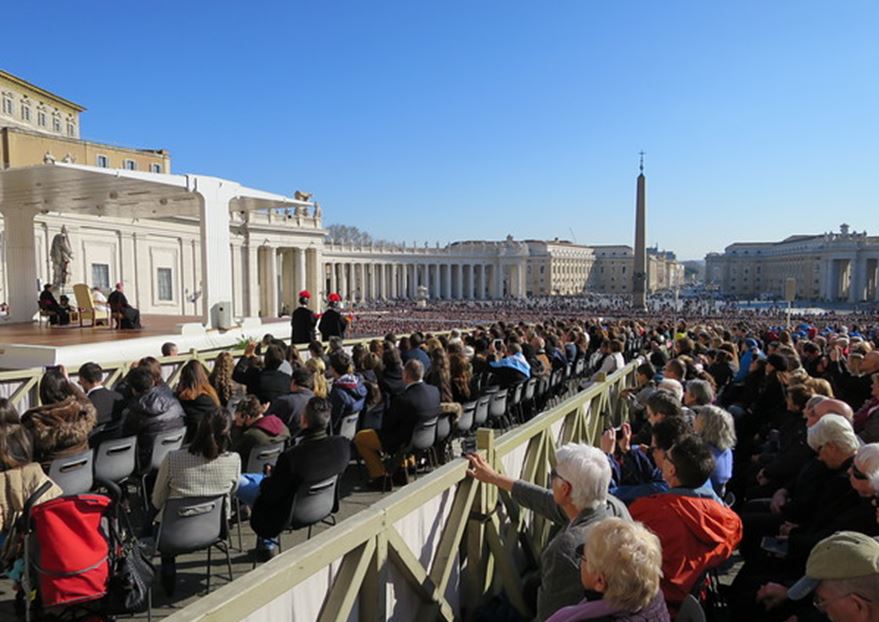 This is the view the closest audience, “VIP” section, gets during the papal general audience. (Provided by Jeannine Gramick)

During the 10 days before we left for Italy, several things occurred. First, the Apostolic Nuncio assured me that my correspondence had been transmitted to the Holy See. Second, Archbishop Cordileone’s secretary phoned to say that the Archbishop had scanned and emailed my letter to the Secretary of State’s office. Third, I received a letter from Archbishop Georg Gänswein, Prefect of the Papal Household and a personal secretary of emeritus pope Benedict XVI, indicating that there were reserved tickets for our group for the general Wednesday audience.

On the night before the audience, we picked up a 6” x 9” envelope with an official-looking enclosure for admittance of our 49 pilgrims. The next morning at St. Peter’s Square, papal ushers led us to the highest level near the doors of St. Peter’s Basilica, fewer than 25 yards from where Pope Francis would be sitting. As the crowd in the main square looked at the Pope, our group could be seen on the same platform, but to the left – quite an appropriate place for us to be!

Because a group of pilgrims from Argentina was seated in front of us, we were not close enough to shake hands with the pope, but as he walked by our section, we called out, “We are lesbian and gay Catholics!” and sang “All Are Welcome.” Our pilgrims were thrilled to see the pope up-front and personal. “A once-in-a lifetime experience,” some said. Many were flashing pictures or capturing Francis on video. Several pilgrims thanked me for writing that letter. A few announced that they were going back to church.

I have my doubts about whether Pope Francis ever saw any one of my letters; however, those at the Secretariat of State and in the Papal Household who did see my letter knew that we were a group of lesbian and gay Catholics and their allies. The letter also stated that I had had previous difficulties with the Congregation for the Doctrine of the Faith (CDF). In fact, I had met Georg Gänswein at the CDF a dozen years ago. The officials also knew that this request was being made through high-level U.S. churchmen. 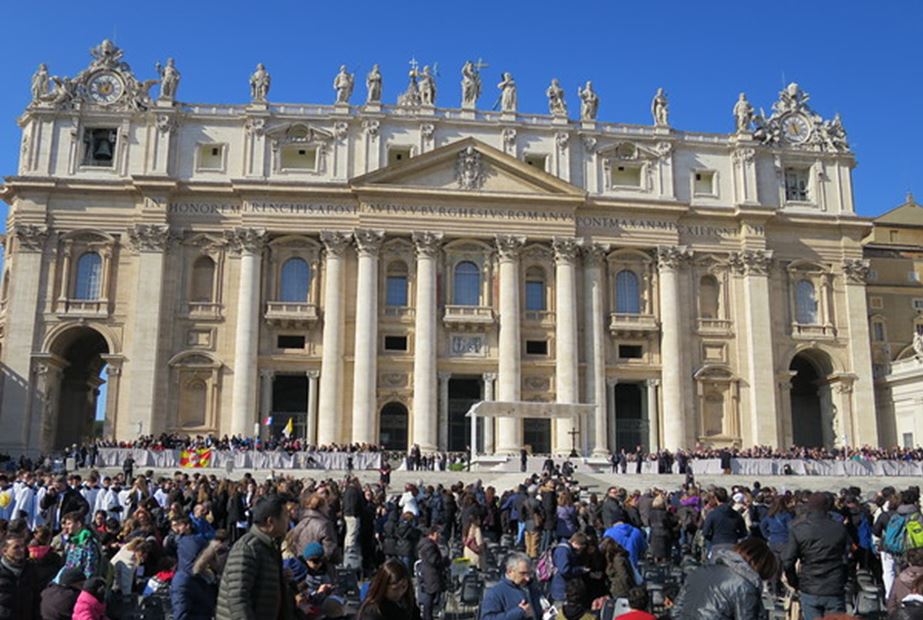 People congregating in the square; the papal section can be seen in front of St. Peter's, as can the VIP sections on either side of the pope's platform. (Provided by Jeannine Gramick)

We received exceptional treatment because the papal winds have changed. During the previous two pontificates, there was not even any recognition for the lesbian and gay pilgrims I brought to papal audiences, let alone VIP seating. The special handling we received this time illustrates the Francis effect. His desire to welcome the marginalized has begun to permeate church structures and is causing movement in our church – movement at the Vatican level and movement among some U.S. bishops who now feel free enough to dialogue with lesbian and gay people and those censured under other papacies. There is a new spirit in the church, a spirit of bringing people from the outside closer to the inside, a spirit that all persons have value, even those whom some have labeled sinful or dissident.

My colleague, Francis DeBernardo, says that papal audiences are all about gestures and symbols. The public symbolism of this papal audience was the honor and recognition given not only to our group but also to all lesbian and gay Catholics and their allies. Behind the scenes, were gestures of dialogue among those who work for the good of the church, but who sometimes come from different, or even opposing, directions.

Every day I thank God for Pope Francis and pray for his continued good health. I am unabashedly one of his multi-billion+ fans. This Pope gives me hope!

[Sr. Jeannine Gramick is a Sister of Loretto who has been involved in a pastoral ministry for lesbian and gay Catholics since 1971. She co-founded New Ways Ministry and has been an Executive Coordinator of the National Coalition of American Nuns since 2003.]

Serving those in the shadows, sisters follow in footsteps of women long gone

Simone Campbell to get peace award