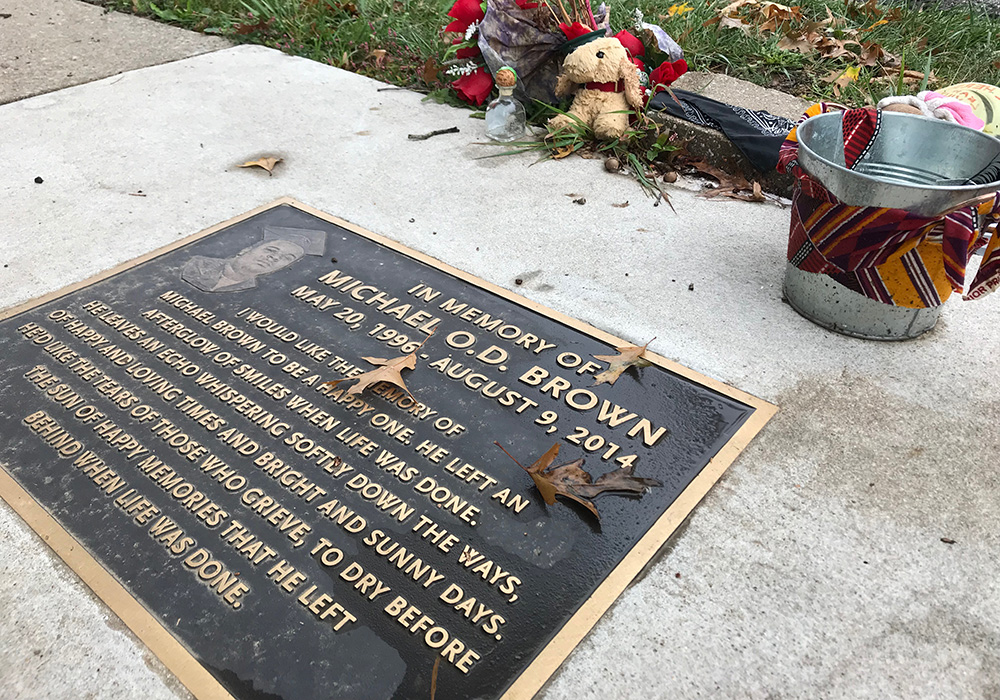 A memorial near the spot where Michael Brown was killed in Ferguson, Missouri., is seen in October 2017. The unarmed teen was shot and killed Aug. 9, 2014, by a white police officer. (GSR photo / Dawn Araujo-Hawkins, Global Sisters Report)

This Pulitzer Prize-winning photo by St. Louis Post-Dispatch photographer Robert Cohen was taken after the death of Michael Brown on Aug. 9, 2014 in Ferguson, Missouri.

I have been reflecting on what it shows: awe, fear, and shock in bystanders as Edward Crawford Jr. throws a tear gas canister ("I didn't throw a burning can at police," Crawford told the St. Louis Post-Dispatch, "I threw it out of the way of children."). He is armed only with a bag of chips. I see anger turned to rage, despair moving toward desperation, courage, bravery, destructiveness, potential, athleticism and energy. His wearing the American flag gave me pause.

Three years later Crawford, 27, died of what police said appeared to be a self-inflicted gunshot wound, according to the Post-Dispatch.

As my city remembers the fifth anniversary of the killing of Brown, a black teenager, by white then-Officer Darren Wilson, there are some disturbing signs that the racial divide in St. Louis and Ferguson continues to escalate. Other Ferguson activists feel imprisoned by systemic injustice, and struggle to believe that anything will change. Protesters live in fear for their lives.

The Post-Dispatch reported in March that one protester, Cori Bush, said that "her car had been run off the road, her home had been vandalized, and in 2014 someone shot a bullet into her car, narrowly missing her daughter, who was 13 at the time."

Darren Seals, 29, was an activist from Ferguson. In 2016, he was found dead inside a car that had been set on fire. Seals had been shot. "He represented the authenticity of Ferguson: that rawness, that realness, that readiness," Alexis Templeton, another activist for Ferguson, told The Washington Post.

Deandre Joshua, 20, was shot and killed. His body was found, partially burned, the day after Wilson was acquitted. Ed Magee, spokesperson for the St. Louis prosecuting attorney, refuted a rumor that Joshua supposedly testified before the grand jury that was probing Brown's death.

Bassem Masri, 31, died in 2018, found unresponsive on a bus in Bridgeton, Missouri. The St. Louis County medical examiner's office says there was no sign of trauma and later confirmed that he died of an overdose of fentanyl. He frequently protested in Ferguson, while livestreaming. He was known for his strong outspoken beliefs and thoughtful conversation. He was Palestinian-American, living in Chesterfield, Missouri.

MarShawn McCarrel, 23, shot himself on the steps of the Ohio Statehouse in 2016. He had been a Ferguson activist for Black Lives Matter. On the Friday before his death he had received recognition at the NAACP Image Awards in Los Angeles.

Danye Jones, 24, was found hanging from a tree in the yard of his home in north St. Louis County. He was the son of activist Melissa McKinnies. His mother is convinced it was a lynching, but the Post-Dispatch reported that the St. Louis County medical examiner's office ruled it as a suicide.

What can I learn from these tragic deaths of members of my city? How did I live in a city that used tanks and armored vehicles to respond to protesters — some armed, but many not? How can I live my Christianity in a more honest way?

James Cone, a black theologian, felt that black slaves, having received Christianity from their white masters, heard a message of liberation and thus recovered the true message of Christ. Cone compared the cross — the ultimate symbol of Christianity — and the lynching tree, the most terrible symbol of black suffering.

In his book American Prophets: Seven Religious Radicals and Their Struggle for Social and Political Justice, another black writer, Albert Raboteau, a scholar of religion and a retired professor, noted the words of Trappist monk Thomas Merton. Merton wrote, "The job of the white Christian is then partly a job of diagnosis and criticism, a prophetic task of finding and identifying the injustice which is the cause of all violence, both white and black, which is also the root of war."

I want to engage in the kind of "diagnosis and criticism" that Merton suggests. I researched this column to understand and take responsibility for my own complicity. This challenges me to let go of my white way of viewing this injustice, and take seriously the African American "spiritual insight into our common crisis," as Merton encouraged in his book Seeds of Destruction.

In the book Faith and Violence: Christian Teaching and Christian Practice, Merton's challenge to me is clear:

"I for one remain for the Negro. I trust him, I recognize the overwhelming justice of his complaint. I confess I have no right whatever to get in his way, and that as a Christian I owe him support, not in his ranks but in my own, among the whites who refuse to trust him or hear him, and who want to destroy him."

In 2017 the National Association for the Advancement of Colored People, or NAACP, issued a travel advisory for Missouri. This warning to any person of color passing through our state encourages them to be prepared for racial profiling, since African Americans in Missouri are "75% more likely to be stopped and searched based on skin color than Caucasians." This return to Jim Crow-era politics is alarming to those whose lives continue to be under surveillance, simply because of the color of their skin.

On May, Blake Strode, executive director of ArchCity Defenders, a holistic legal advocacy group, shared a story of one client, which sounds like the "American Dream" gone terribly wrong.

An African American woman working at the airport saw an opportunity to apply for a better job there. She filled out her application for the position. With good recommendations, she was looking forward to advancement. Part of the application was a background check. Unknown to her, it was discovered that she had an unpaid fine of $250. No evidence was given as to the reason for the fine. When she appeared to follow through on her "background check," she was arrested and kept in jail for three days, until ArchCity Defenders paid her fine.

It was later discovered that she was charged with having no lid on her garbage can. When ArchCity Defenders asked the clerk for the address of the house, it turned out to be her neighbor's home. Had it not been for ArchCity Defenders paying her $250 bail, she might have spent months in jail or at the St. Louis Medium Security Institution, also known as the "City Workhouse."

According to Closetheworkhouse.org, "Over 90% of detainees are pre-trial which means they are in jail despite the fact that they have not been found guilty." The website also reports "there are 8x more black detainees than there are white detainees, although only 47% of St. Louis City's population is black."

Columnists for The St. Louis American write that "when people are held at the Workhouse, they endure unsafe, unsanitary, and inhumane conditions." Their column cites a lawsuit filed by ArchCity Defenders which states that "85 percent of the over 1,000 individuals locked in St. Louis city jails are there awaiting trial because they are too poor to pay for their release."

I believe the ArchCity Defenders and Ben and Jerry's are examples of the systemic change needed to end the racial divide in St. Louis. Remembering that Aug. 20, 2019, is widely considered as marking 400 years of African slavery beginning with "20. and odd" African slaves arriving in Point Comfort (later Virginia), I pray we can acknowledge our "original sin of racism" and support systemic change that advances the dignity of all.

Q & A with Sr. Eileen Reilly, advocating against the death penalty in the US

India's campaign against the poor