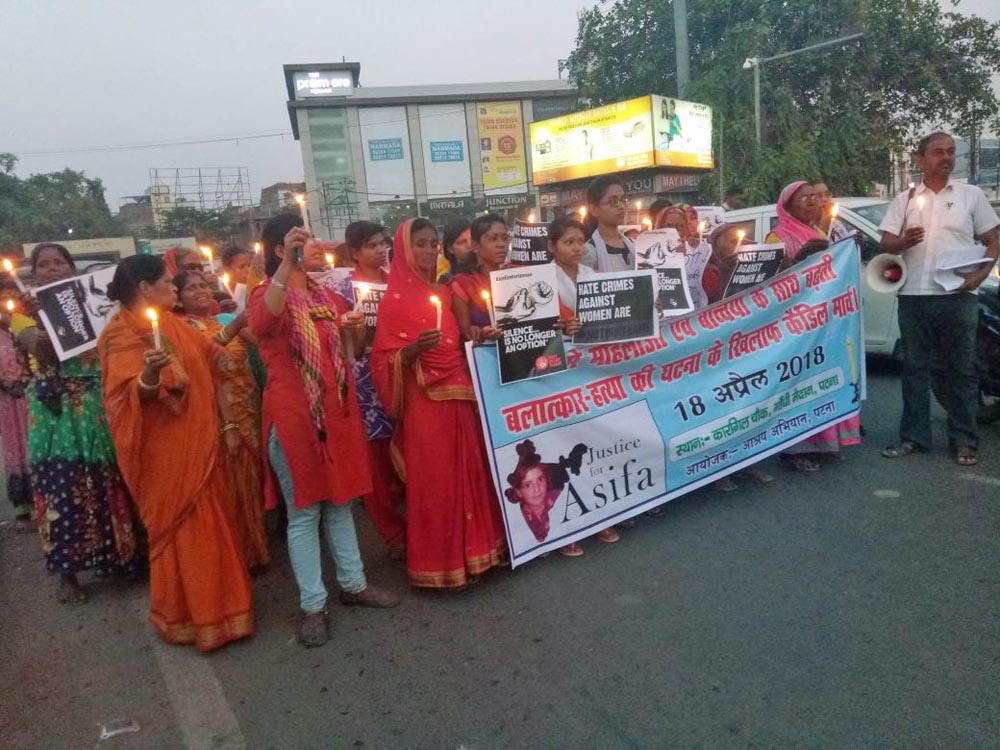 The author was among those who participated in a candlelight march April 18, expressing solidarity and demanding "Justice for Asifa." (Dorothy Fernandes)

Every morning I rise and read the newspaper or watch the news on television; it is one of the most disturbing ways to start the day.

Headlines about violence hit the newspaper. In India the headlines show a rise in the gross violation of human rights.

Yet in spite of all this I believe that a new day comes with the message: Go out again and make one more effort to touch our world.

Since the dawn of 2018, there seems to be a growing culture of violence. We read of so many episodes of intolerance and bloodshed, of young girls and women stripped of their dignity.

Today, violence colored with race, caste, creed, gender and politics seems to have entered the very fabric of our society. Like a cancer, it is spreading throughout the globe.

Innocent lives are being lost, and those of us who dare to speak out do not find many followers.There seems to be a growing indifference about what we are doing to each other.

When atrocities take place, instead of being filled with empathy, some begin to analyze the victims' creed, caste, race and political party. Some of us, ordinary citizens, become loyal to these narrow, human-made categories. We become so blinded that we are not able to stand for the truth.

What is happening to women in India is especially shocking. Even more disturbing — some women are supporting the accused criminals because they belong to the same political party or religion.

One of the women leaders of the ruling party had the audacity to say, as reported in local dailies in Patna, that rape is part of the Indian culture and we cannot stop it.

How can any woman accept this? Does our honor depend on whether we can avoid being raped? Why is the criminal not taken to task?

As I glanced through the newspaper today I was stunned to find three cases of rape in Bihar. It saddens me to read about the rise of this crime, and I ponder the cause: is it poor parenting? Is it because the families are not teaching boys to respect girls and women?

The irony of this is that some men will make sure that their sisters and daughters are safe and protected, but they have no difficulty in attacking someone else's daughter or mother. How can they chose to inflict violence on women based on their caste, creed or political party?

Yesterday I had a very interesting meeting with some women who live in unsafe, abandoned buildings. They were concerned about the lack of monitoring by mothers who live there.

Sometimes the women see young girls loitering around with boys. When they bring it to the attention of the mothers, most of them brush it aside, thus encouraging the girls to continue that behavior.

The women were very vocal as they began to share their stories. I thought I had opened up a hornet's nest as the stories poured in! By way of conclusion, the women pleaded to have another meeting out in the open park; they promised to organize it and said they will speak out.

While protest marches and sit-in fasts are held to express solidarity with the victims, we need to consider strategies to put a stop to these violent attacks. These heinous crimes are on the increase, sometimes motivated by vengeance or political gain.

I think the simple belief that we are all human and need to protect each other is sufficient reason to do something about this.

A recent crime was the rape and murder of Asifa Bano — an 8-year-old girl belonging to a nomadic tribe in the hills of Jammu and Kashmir. Bano was raped in a temple for days, then killed. The BBC reports that eight suspects were arrested, among them "a retired government official, four police officers and a juvenile in connection with Asifa's death."

India hangs down her head in shame as one of her daughters was killed by a dominant fanatic group. We held a candlelight march April 18 to express our solidarity and demand Justice for Asifa.

I was shocked to see, across the street from us, a group of young men denouncing us and supporting the ruling party, shouting slogans in support of the prime minister and the chief minister.

Our very humanity is at stake when political or financial gains, or the victim's creed or caste are the parameters used to justify a crime. This is not acceptable to most of us. When a daughter born in India is raped, every Indian should hang down his or her head in shame.

If we believe that there is one God and that we are brothers and sisters who share a common home — Mother Earth — how can we remain silent spectators to these premeditated crimes against half of humanity?

We cannot serve two masters; when these threats loom over us, we need to reach down to the depths of our being and get in touch with the God within us.

We humans have lost our senses and find it difficult to look at each other with the compassionate face of God, and extend God's mercy to all.

To some extent I blame technology, which has made us slaves; we do not have time to interact with each other. Families spend most of their time on social media.

When I was meeting with some parish youth, they expressed a yearning for family life, saying there is no quality time for prayer or sharing, or for just being with each other.

We need to make changes in how we think, relate to each other, and move as humankind, and not as caste, creed, or a member of a political party.

I agree with Pope Francis in his encyclical Laudato Si' when he explains that the real problem is that humans no longer see God as the Creator. Thus we see "other living beings as mere objects subjected to arbitrary human domination" and do not realize that "the ultimate purpose of other creatures is not found in us."

I would like to reemphasize what Pope Francis is inviting us to do; to take care of our common home. Since we share this common home, we are interconnected, we are interdependent, and therefore, we are brothers and sisters. It then becomes our responsibility to care for each other. Any injustice cannot be accepted. We have to raise our voices.

He has given us many indicators — many invitations on how to be human. Let's not lose sight of this!

Every new day comes with the message: Go out again and make one more effort to touch our world.

[Dorothy Fernandes is a Sister of the Presentation of the Blessed Virgin Mary from India. She presently serves as vice provincial of the Indian province while continuing to be deeply engaged with the urban poor of Patna, Bihar.]

From Ukraine: The first day of 'not our war'

Challenging the corruption-prone systems that plague our world