Zimbabwe at a crossroads 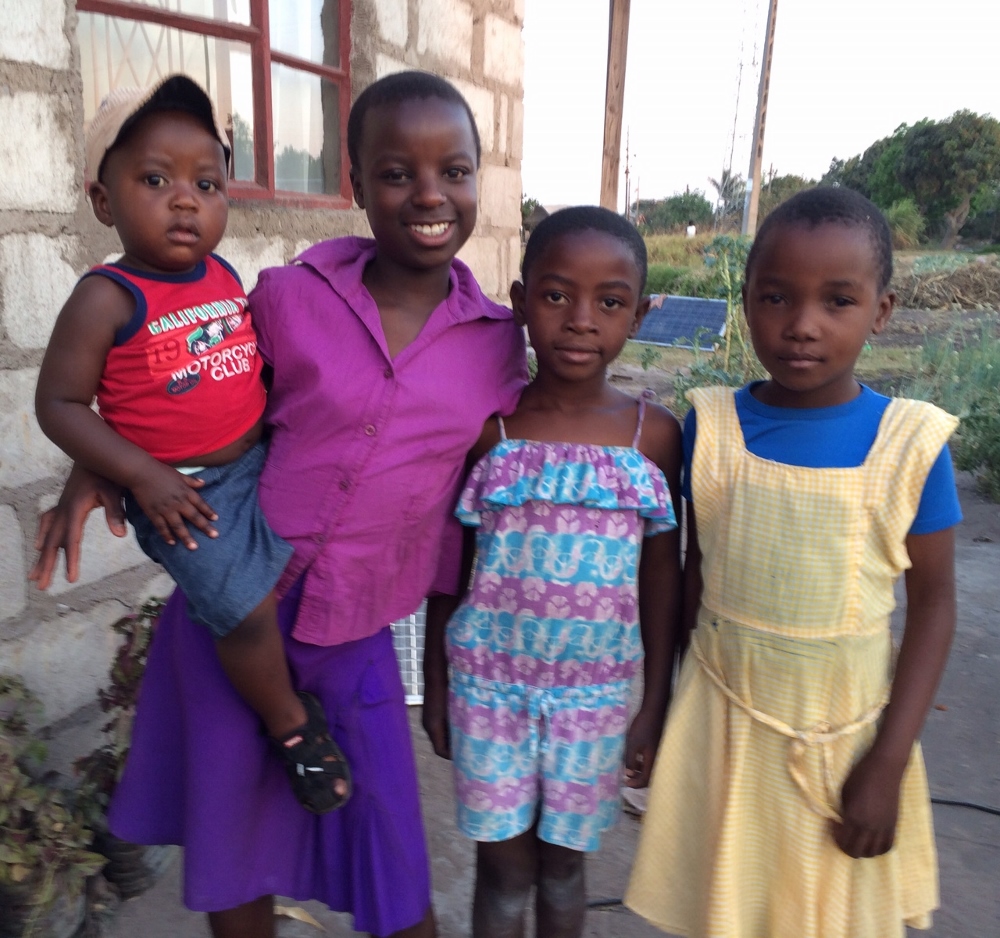 As families in the United States gathered to give thanks for their blessings on Thanksgiving Day this year, families in Zimbabwe gathered to pray for peace and a new beginning for a country that has suffered under the rule of one man for 37 years.

Robert Gabriel Mugabe resigned as president Nov. 21, just minutes before the Parliament was set to impeach him. On Nov. 24, former Vice-President Emmerson Mnangagwa replaced him in a ceremony attended by thousands of Zimbabweans and neighboring heads of state. Mugabe and his wife, Grace, were conspicuously absent.

I watched the dramatic events of the past week with surprise and with appreciation for the spirit of peace and calm that prevailed. I talked to people. "I have never known any other president except Robert Mugabe," said a young professional woman. "I want my children to grow up in a free Zimbabwe." She joined a massive solidarity march Nov. 18, where people of all races, ages and political persuasions had poured on to the streets of major cities demanding the Mugabe's resignation and thanking the army for its support.

"Life was becoming unbearable," a young mother told me. "I don't want my children to leave the country to look for jobs in neighboring countries or overseas." In a nation with 90 percent unemployment, almost every family has two or three children living and working elsewhere — in South Africa, Australia or Great Britain.

Even those who have jobs cannot get their money out of the banks, as the country suffers from a serious cash shortage. It is no wonder that the majority of Zimbabweans supported the military intervention and cheered when they heard that the president — once a national hero —had resigned.

I am witnessing history unfold again in this country of 13 million people that gained independence from a minority government led by Ian Smith. A bloody 12-year liberation war had ended with a negotiated settlement and national elections that brought Mugabe and his party to power.

I was present on April 17, 1980, when Mugabe was sworn in as the prime minister of Zimbabwe and Rev. Canaan Banana became its first black President. I cheered along with the crowds at this new beginning for a country with such natural beauty and rich potential. Calling it "the jewel of Africa," Julius Nyerere, former president of Tanzania, urged Mugabe to preserve it.

Hopes were high that April night as the Union Jack was lowered and the colorful flag of a new Zimbabwe was raised. The Catholic Church was proud that the prime minister was one of them. The church had by and large supported the liberation struggle against colonial rule, and the Catholic Commission for Justice and Peace had played a critical role in helping to end the war and bring all parties to the negotiating table.

Archbishop Patrick Chakaipa gave the invocation at the independence celebrations and celebrated a Mass of Thanksgiving attended by Robert Mugabe, his first wife, Sally, and most members of the new cabinet.

"The prominent role played by the Catholic Church during these celebrations was seen by many as a public acknowledgement of the support which the church had given to the nationalist guerrillas during the liberation war," I wrote in my doctoral thesis at the University of Zimbabwe 10 years later. "It was also seen by some as proof that Mugabe had not renounced his Catholic faith in spite of his years as leader of an avowedly Marxist liberation movement."

I had interviewed Robert Mugabe at the liberation headquarters of Zimbabwe African National Union (ZANU) in Maputo, Mozambique, in 1978. He told me that he saw no contradiction between his faith and socialism, comparing the socialism espoused by ZANU with that practiced by the early Christians who held everything in common.

The few times that I met him over the following years, he was always friendly, open and kind. He was interested in my work and always asked about my family. He invited Maryknoll and other religious communities to send personnel to help build the new Zimbabwe. 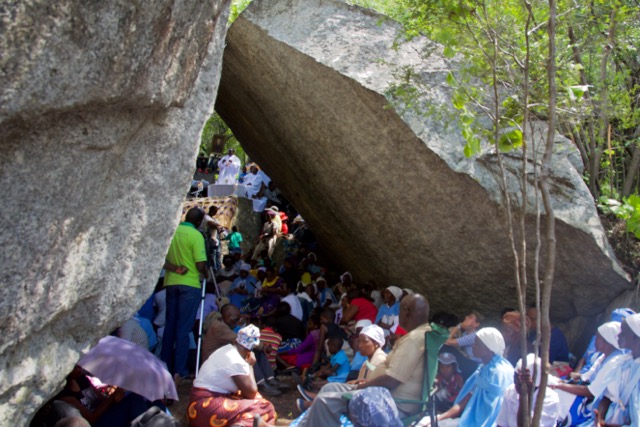 An outdoor Mass for John Bradburne, a layman and third order Franciscan who served people with Hansen's disease in Zimbabwe and was martyred. (Janice McLaughlin)

I, therefore, found it difficult to reconcile my personal experience with his increasingly hostile stand toward the West and whites in general — and his government's slide into violence, corruption and mismanagement.

Still, during all Mugabe's years in power, the government never discriminated against Christian churches. It retained the British policy of paying teachers' salaries at church-run schools and subsidizing church clinics and hospitals. Priests and sisters are exempt from paying income tax in Zimbabwe, and the national curriculum includes an ecumenical syllabus for religious education.

Mugabe, his current wife and his mother, Bona, received Communion from the hands of Pope John Paul II in 1998; he called himself a practicing Catholic and made donations to various Catholic institutions including the school and hospital in his home village of Kutama.

Not all has been rosy between church and state, however, as the Catholic Commission for Justice and Peace and bishops' conference issued statements exposing and condemning the massacres in Matabeleland (in the first decade after independence, 20,000 people died) and condemned the violence that characterized national elections over the years.

The Catholic bishops and justice and peace commission continue to issue strong statements about current issues and have been joined by the heads of other Christian denominations. During the past momentous week, the Zimbabwe Catholic Bishops' Conference called for "restraint and patience" and "a speedy return to normalcy and Constitutional order" and stated that "any transition … must embrace all Zimbabweans in their diversity and their oneness."

Jesuit Fr. Fidelis Mukonori, an active member of the justice and peace commission before and after independence, was called in to mediate. Some felt that he was too close to the president, but others believed that his presence was essential since he had Mugabe's trust and could negotiate a graceful exit for the 93-year-old leader.

Mukonori was present at the inauguration, together with the military commanders who played such a crucial role in resolving the divisions within the ruling party and putting an end to the dynastic ambitions of Grace Mugabe.

The ceremony was filled with competing symbols. Banners in the stadium read "Yes to peace, love and harmony," but military symbols dominated the celebration. A military band played, regiments of the army and air force marched past, planes flew overhead and cannons fired a 21-one gun salute.

The new president spoke of unity, tolerance and forgiveness and paid tribute to his predecessor he called a "father, mentor and guide."

"History will grant him his place as founding father," he said.

Mnangagwa called for an end to corruption, yet he and his associates have enriched themselves illegally. "We can't change the past," he said, "but we can take a different direction. Let by-gones be by-gones; let's embrace each other and rebuild our country." He gave little indication of how this will be achieved and did not indicate that he would form an inclusive government of national unity.

The focus was on reviving a economy that has hit rock bottom and on creating jobs. The rallying cry of "jobs, jobs, jobs" brought cheers from the crowd of 60,000. The new president called for foreign investment and the lifting of sanctions, but he did not say what reforms would be put in place to allow this to happen.

He spoke of compensating former white commercial farmers for the property they had lost and stated that the land reform was not reversible. He also promised that elections scheduled for next year would go forward but did not mention all the groundwork that must be done to overcome the rigging and the violence that has characterized elections over the years.

He used words like freedom, democracy, partnership and forgiveness. I hope that he means them and that he will use the Constitution and its bill of rights to ensure that life will get better for all Zimbabweans.

The commentator at the ceremony called this "a new dawn for Zimbabwe." I believe that the majority of Zimbabweans are hoping and praying that is true. We are willing to give the new president the benefit of the doubt, in spite of his checkered history and his role in the Mugabe era before and after independence. We wait, pray and hope that this is a real turning point for the country.

The Advent readings seem very appropriate. "Repent, change your ways," we are told. We were all complicit in maintaining a culture of silence that gave one man such power. It is time to repent and take a more active role in creating a society based on peace and justice.

Pope Francis points the way forward for the new leaders of Zimbabwe when he says: "I beg the Lord to grant us more politicians who are genuinely disturbed by the state of society, the people, the lives of the poor!"

[Janice McLaughlin has been a Maryknoll Sister since 1961, working on the African continent since 1969 in the fields of mass media, adult education and justice and peace.]

Social Justice | Zimbabwe at a crossroads

Affirming the dignity of those forgotten, shunned, ignored

Tanzanian girls: Independent and in charge of their own futures