Editor's note: As reported in The Tablet on May 24, Pope Francis has appointed the first women consultors to the secretariat of the Synod of Bishops, three of them religious sisters: Xaviere Missionary Sr. Nathalie Becquart, author of this column (written before that news broke) and one of the three sisters, told The Tablet that the appointments reflected the pope's desire for greater female representation at senior levels.

As one of the seven sisters who received the great gift of taking part in the latest Synod of Bishops on young people in Rome last October, I would like to extend a special invitation to you!

On April 2, Pope Francis' post-synodal apostolic exhortation Christus Vivit ("Christ is alive") was released. Have you read this amazing letter from Pope Francis, that calls young people and all the people of God to live, love and serve at the highest level by daring to encounter Jesus Christ as a close friend?

It's truly a beautiful little treatise on the spiritual and pastoral life, and it will help you enter into the extraordinary adventure of the synod on youth.

Indeed, "Christ is Alive" — the fourth apostolic exhortation of this pontificate after Evangelii Gaudium, Amoris Laetitia and Gaudete et Exsultate — is the fruit of a whole synodal process and represents an important step forward.

With the publication of this major text, the important phase of the implementation of the synod in the local churches has started. We are now called to inculturate these guidelines to reach and accompany young people in their faith and vocational journey.

For this text is more than a conclusive high point; it is a challenge to embark on an adventure:

And I believe that religious life — especially since religious (among the bishops, experts and observers) played a major role during this synod — is called to be truly involved in this key post-synodal step.

So enter into this text as you would enter the boat with Christ, for a journey to the great outdoors. I hope you discover new horizons, taste the joy of being a missionary disciple, and are strengthened in faith and hope. This time of crisis, so difficult for our church, calls us to reform the church, fight against all abuse, and move ever closer to the victims.

Through this letter I hope you experience the concrete presence of God at the heart of our history and our world, as we participants received that grace on our synodal journey that began Oct. 16, 2016. On that day Pope Francis announced the theme of "young people, the faith and discernment of vocation" for the next Synod of Bishops.

At that time I was the director of the National Service for the Evangelization of Youth and Vocations at the French episcopal conference. My team and I received this announcement as a beautiful opportunity to boost our mission with all those involved in youth and vocation ministry.

It was an honor to be involved in those two years of pre-synodal preparation, not only in France but also in Rome for many international meetings. I was invited to serve as the general coordinator of the pre-synod itself, with 300 young people from all over the world; what a tremendous gift! The meetings were literally a time of walking together, as the etymology of the word "synod" indicates (sun-odos = road together). They were a time of listening to the Spirit speaking through the voices of young people — their dreams and aspirations, their fears and questions.

By focusing on young adults aged 16 to 29 and using a process of consultation aimed at truly listening to them, the church allowed herself to be touched, shaken, and transformed by this generation in search of meaning — and representing nearly a quarter of humanity.

The synod itself last October was a profound human, spiritual and ecclesial experience. We worked alongside the pope for more than four weeks in a dynamic of common discernment, seeking together how to live the mission to and with young people in today's world. We lived a New Pentecost and experienced a great communion beyond our cultural differences. And we went back to our local churches with a burning desire to share the flame of the synod, the fire of the presence of the Risen One who had come to renew and rejuvenate his church.

From this profound listening to young people — who played a major role throughout the pre-synodal journey and especially at the synod — a new gift emerges today. With this letter, Pope Francis offers all God's people on the move, especially young people, a precious compass for the road.

This text, which often quotes the actual words of young people, is more than a text. It gathers the living experience of young people in today's world, full of resources but also confronted with multiple difficulties and challenges. This exhortation is the fruit of a final discernment by Pope Francis, based on what emerged from the discernment of the synod fathers, and based on a process of thorough consultation with the people of God.

The style and themes dear to Pope Francis are easily recognized in this letter, the fruit of a common listening to the Spirit. The text sets out to clarify the way in which the Spirit works, and to lead the hearts of young people (between the end of childhood and the beginning of adulthood) through their difficult choices. Coming from a spiritual and ecclesial experience, Christus Vivit aims to recreate the ever deeper personal encounter with Christ, as our close friend. And it is an intrinsically social and communitarian experience, because Christ's love always leads to others.

The words, a proclamation of salvation through Jesus Christ, rely heavily on the experience of friendship so familiar to young people, so they should be read as a letter received from a very dear friend. A letter to read and reread slowly. A letter whose every word is savored. A letter that makes us present to the friend with whom we have so much to share. A letter that nourishes, comforts, inspires and opens the future. A letter that testifies to a path of life to help us move forward on our own path of life. A letter that leads to thanksgiving and calls for action to love and serve more.

So I invite you to open this letter, Christus Vivit, without delay and wish you a good reading in the rhythm of the Spirit.

[Nathalie Becquart is a member of the Xavière Sisters, Missionaries of Jesus Christ in France.] 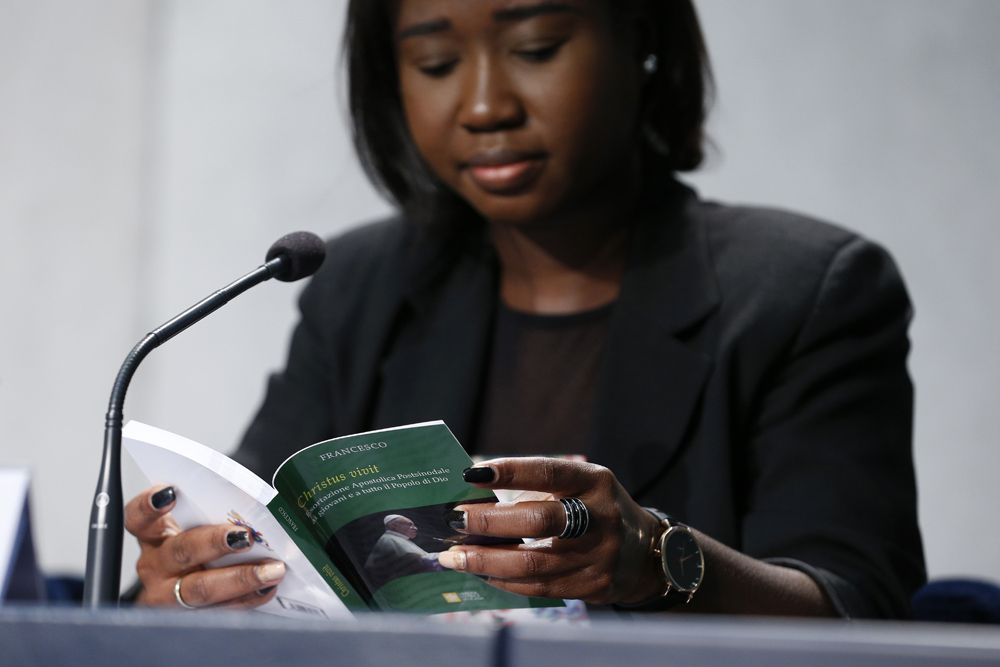