I can still picture it: my teacher Gato (so dubbed because his eyes were two different colors, "like a cat," he said) and me hunched over an article in a small booth-like classroom at a Spanish immersion school in Quetzaltenango, Guatemala.

He had copied some materials for me so I could meet my Latin American history requirement for a Spanish major during the summer immersion I took in 2008.

The reading described the political career and impact of military dictator José Efraín Ríos Montt, who was eventually charged with genocide for his role in Guatemala's three-decade-long civil war.

I shared back what I had understood from my first read of the article between the challenging vocabulary and my así-así (so-so) Spanish. After my verbal summary, Gato nonchalantly began, "Yes, that's basically what it was like," and proceeded to share his experiences of hiding himself and his family in the mountains as his people were being systematically massacred in the '90s.

I hadn't paid close attention to the dates as I read, and suddenly, it hit me: This wasn't something that happened centuries ago. In fact, it had ended less than a decade ago.

The people I passed every day walking through the neighborhoods of Xela had all lived through this atrocity. They all carried its scars. Including Gato.

As we dug deeper into the topic, Gato shared more about the international underpinnings of Ríos Montt's regime, including the fact that he was trained at the U.S. Army School of the Americas and had been publicly supported by the U.S. government.

The more I learned, the deeper I plunged into shock and anger. How could I have been oblivious to the massacre of hundreds of thousands of people with U.S. support? Why did I have to travel 2,500 miles to uncover this truth about my own nation? What else was happening under my nose that I was clueless about?

As my anger cooled into shame, I spent some time processing with another teacher from the immersion school. I shared that I was really struggling being American.

Wait, what? Now add "confusion" to the list of emotions.

"Of course," I thought, again caught off-guard by my own tunnel vision. Although in the United States, we seem to have decided we have a patent on the term "American," this made perfect sense. Latin American countries have a different term for us — "estadunidense," which roughly translates to "United Statesian."

Fast-forward 10 years, and I find myself in the cafeteria of St. Gabriel Catholic Church, preparing for a Faith in Indiana rally with my agenda team. Ana, who is translating, runs over to get a quick clarification during our preparation, and we get to talking about word choice.

We wanted to share the voting rates of different demographics on the west side of town.

"Did you mean for this to say 'white people'?" she asked, "Because often, in Spanish, people just say, 'Americanos.' "

I paused. This was a conversation I'd had several times with immigrant leaders in our movement. According to them, I was "Americana" because I was white and had citizenship.

We grappled with this phenomenon in one of our meetings: When does one become "American"? Where do black people fit in a conversation that uses "American" as synonymous with "white"?

Some believed as soon as an immigrant got citizenship, she could now be named as "Americana." Others said it had to do with English proficiency. Still others said someone born outside the United States could never feel or be fully American here.

I listened as women and men who had lived here for decades — some longer than I've been alive — described themselves as "visitors" to the United States. And we didn't even get into the South/Central/North America debacle.

As the conversation went on, I felt the tension of where I stood as "Americana." The irony and privilege of the moment were not lost on me. I could see clearly that my "U.S. American" identity, the very piece of my identity I now struggle most to claim, is the same piece that many of my compañeros and compañeras in the movement could never claim, no matter how much they wanted to.

Whether inside or outside this circle of identity, neither side feels safe to claim in this moment.

This tension brings to mind for me Jesus' experience building a movement to topple an oppressive empire while simultaneously living deeply connected to something bigger.

He was fully present and engaged in his country, traveling and speaking, seeing and healing his people. And yet, as the threat of his public execution loomed, he proclaimed with clarity, "My kingdom does not belong to this world."

His power was entirely separate from his national identity, even as he fought for the liberation of his nation.

I wonder, too, if the founder of my religious community, Mother Theodore Guerin, felt a pang of this tension after she renounced her French citizenship for the sake of founding a U.S. American community in Indiana in the 1840s.

Although she wrote at length about the pain of detaching from her French roots, she also wrote, "In our combats, our labors and our tribulations, let us raise our eyes to Heaven, our true country."

This has never been one of my favorite Mother Theodore quotes. And yet, these days, as I feel deep tension about my U.S. American identity, I seek to follow her example. I pray to persevere in grounded, gritty hope; to open my eyes to a sacred vision even as my feet are firmly planted en la lucha (in the fight).

[Tracey Horan is a member of the Sisters of Providence of Saint Mary-of-the-Woods, Indiana. Her first deep conversation with this community occurred in a melon patch during her time as an intern at the Sisters' White Violet Center for Eco-Justice. She is a community organizer with Faith in Indiana (formerly IndyCAN).] 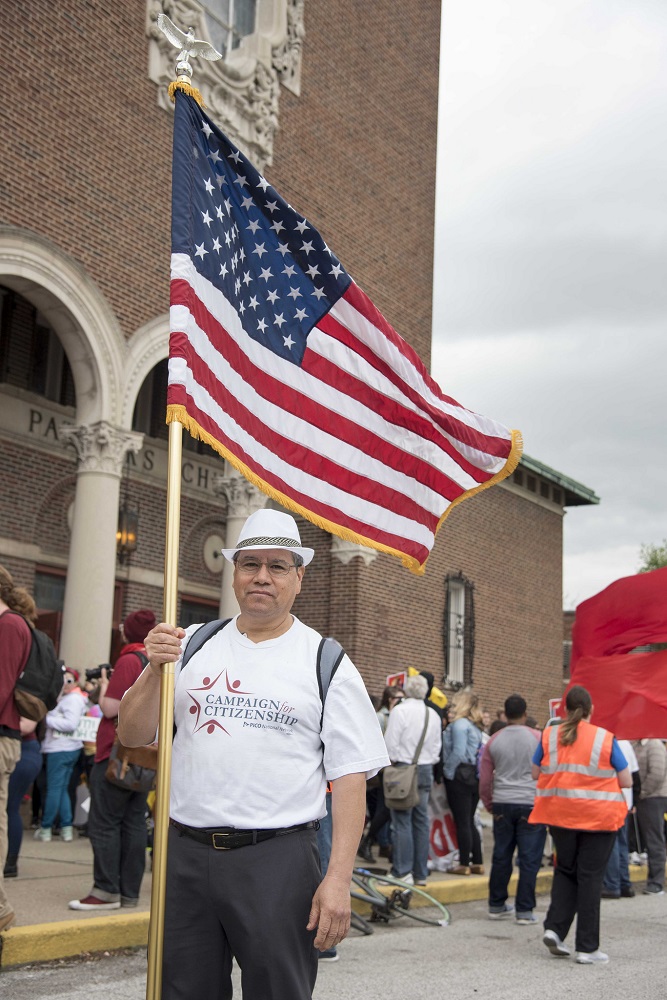