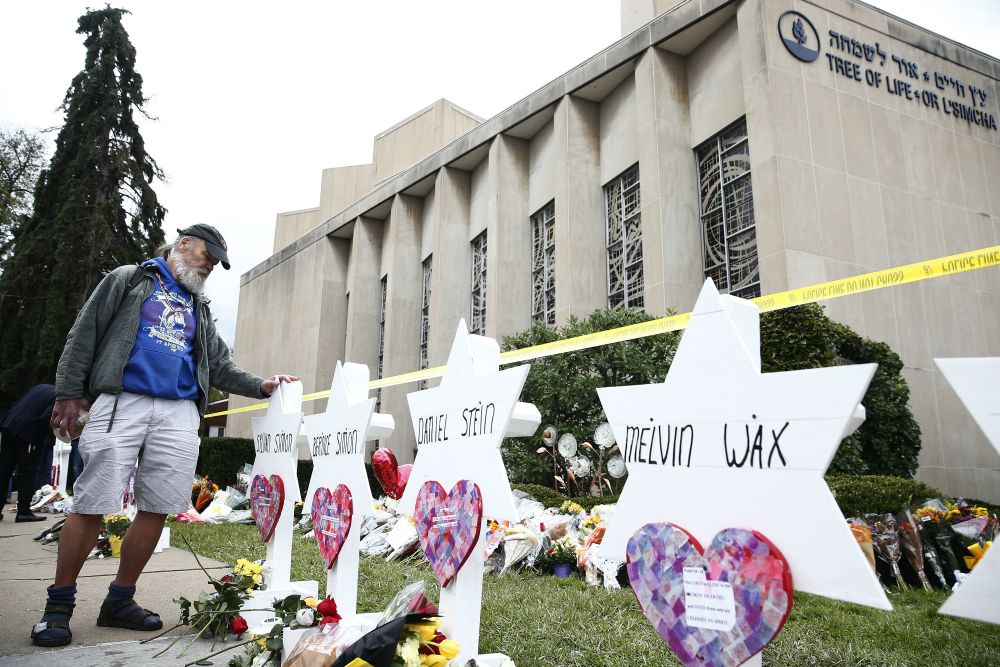 A man pauses Oct. 29 at the Star of David memorials with the names of the people killed Oct. 27 at the Tree of Life Synagogue in Pittsburgh. (CNS / EPA / Jared Wickerham)

The souls of the righteous are in the hand of God,
and no torment shall touch them.
They seemed, in the view of the foolish, to be dead;
and their passing away was thought an affliction
and their going forth from us, utter destruction.
But they are in peace.
(Wisdom 3:1-3)

As I pray with this All Souls' Day morning Scripture for the people killed in our country this week, an image arises in my heart. I imagine an enormous, sustained embrace in heaven. At the center, God is pulling our dear departed brothers and sisters close, holding them to God's eternal heart of love.

There are no longer traces of torment and destruction on their bodies; their wounds are healed and their faces shine with the peace the world cannot give.

At the center of the embrace are also the countless victims of violence and violent systems that we know died this week around the world but have not been named in the news: Central American migrants who have perished in the desert, refugees drowned in the Mediterranean Sea, countless precious humans killed by airstrikes in Yemen, children dying at camps in Syria, and so many more.

God is a kinship of strong, tender black women, the kind of women who hold a community together. God rejoices to draw her children near to her, nearer than we could ever imagine, but tears of profound sorrow leave glistening traces on her cheeks. She weeps for the hate that brought them here, and she cloaks them all in her sweet, eternal love.

The circle gets wider from there. Beloved family, friends, ancestors in blood and faith: All come rushing to greet these, our brothers and sisters, jubilant to be reunited and simultaneously profoundly pained for the violent way they were taken from earthly life. Martyrs are there, too — other victims of poverty and injustice and those who have been murdered throughout history just for being who they are. All of them wrap their arms around the gathering community and lean in, resting their heads on one another.

Soon, all of heaven is there, and the embrace is just layer upon layer of people from all times and places and religions, with God's beating heart of love at the center.

And even though this is heaven, it is not separate from Earth. This massive heavenly group hug is somehow simultaneously embracing those left behind, the living family members, friends, neighbors and congregants for whom the violent departure of their loved ones was (and is and will be for a long time) affliction, torment and trauma. The embrace holds all those who live in fear and suffering because of racism, anti-Semitism, Islamophobia, xenophobia, homophobia, sexism, war and greedy, capitalist, colonizing systems. The peace of God's love pours out in desire to soothe our aching world.

On this All Souls' Day, we are truly in mourning. Again. The tragedies in Pittsburgh and Jeffersontown, Kentucky, are not isolated incidents; they are, sadly, two more in an epidemic of domestic terror. God weeps.

As Christians, we cannot sit idly by.

This Sunday begins National Vocation Awareness Week. I'd like to suggest a broader focus than the usual celebration and promotion of vocations to religious life and ordained ministry: What if every one of us dedicated this week to deep reflection on the meaning of our Christian vocation? What does it really mean to be a follower of Christ in these times?

It should go without saying that Christians who can vote must. Christianity is inherently communal. We believe in the communion of saints and the body of Christ. We believe we are all really connected and united in God, both with all those who ever lived and all those living today. Our church calls us to participation in society for the common good. If you have the privilege to vote, you have the responsibility to sincerely form your conscience and exercise your right. No politician embodies all Christian values, but who are the ones who will work not for the rich and powerful, but for a world more like the reign of God? What are the policies that will bring justice and peace, not hate and violence?

Voting is essential, and voting is not enough.

We know that Jesus' public life focused on ushering in what he called the reign of God, or God's plan for all of creation. He did this by both proclaiming and modeling what that reign is and denouncing what it isn't. By his miracles, healings and table fellowship, he restored life, broke down barriers and lifted up the poor. By his parables and preaching, he challenged oppressive power and disrupted the status quo. In the cross, he freely accepted the consequences of his prophetic life, dying a violent death in total self-gift. And then — resurrection.

All of this showed us who our God is.

One thing is obvious here — we aren't God. But as Christians, we are called to continue Jesus' saving mission in our unique lives, to help co-create the reign of justice and love that is "already" and "not yet," to say yes to love and a resounding no to everything in our world that opposes love. The earliest Christians knew: This is about a total reorientation of our lives and communities. We're called to make the eternal, inclusive, heavenly embrace of God real, here and now, for and with all of God's precious children.

Our vocations are ever-evolving; we are people of lifelong discernment, vigilant to God's call in our hearts and the signs of the times. This Vocation Awareness Week, let us ask ourselves:

How am I called to live my Christian vocation now? Whether I am a mother, priest, teacher, businesswoman, nurse, teenager, religious brother, artist, politician, engineer, foster parent, whoever I am: What does it mean that I am a Christian in our current reality? What is one step I can take right now, this week, to live that vocation more fully? What can I do to both incarnate love and life and denounce evil?