Lessons from the moon landing 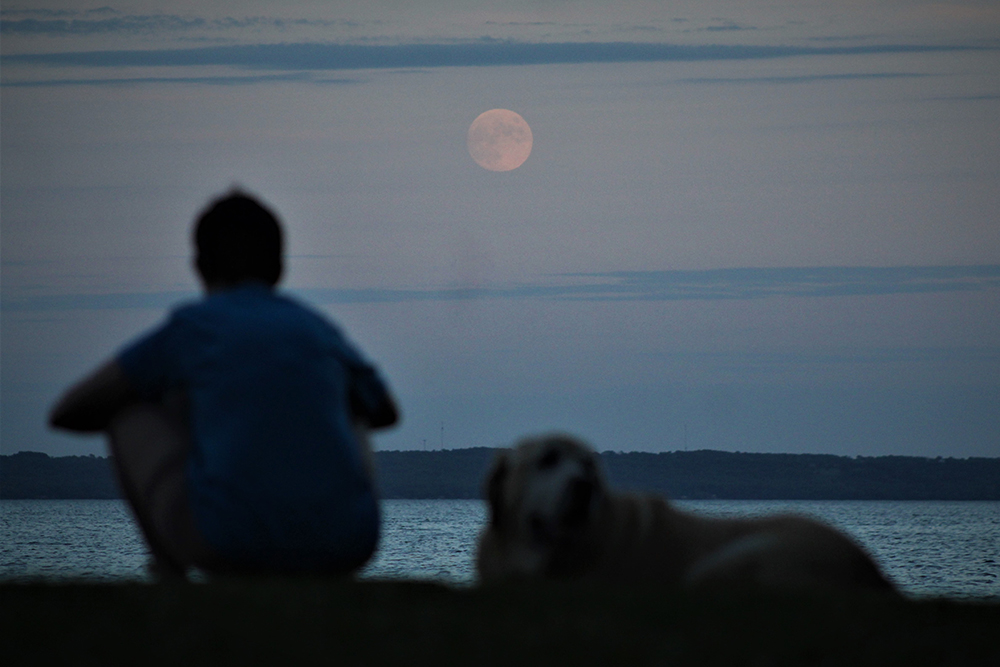 A woman and her dog are pictured under a moonrise July 15, near Lake Winnebago in Wisconsin. The 50th anniversary of the moon landing is July 20. (CNS/Brad Birkholz)

"Let me say, as I sit here before you today, having walked on the moon, that I am myself still awed by that miracle. That awe, in me and in each of us… must be the engine of future achievement, not a slow dimming light from a time once bright."
–Buzz Aldrin, astronaut on Apollo 11 reflecting back in May 1997 on its historic moon landing.

This week, in the midst of news filled with division and derision, I've found myself captivated by, what is by all accounts, old news. Amidst racially charged tweets, revisions to our country's asylum policies, and the ongoing crisis at our border, I find myself drawn to the news of 1969 and the celebration of the 50th anniversary of the moon landing. Without losing sight of the current state of affairs in our country and our world, I'm intrigued by the lessons that the lunar landing offers to us today.

We choose to step out

The Space Race that ensued brought with it all the twists and turns of a great story. It is a story of triumph in an age of disarray, a tale of perseverance and accomplishment that made history.  The choice to go to the moon was about more than doing the "hard" thing- it was about committing to principles and progress for all peoples.

Sure, it would be hard, but, as with many things in life, the commitment was for something greater, a challenge in the service of a greater good.

The choice to go to the moon wasn't a one-and-done decision.  There were a lot of other programs and projects that could have used the funds given to NASA. After President Kennedy was assassinated, President Lyndon B. Johnson could have easily eliminated funding for the space program; in fact, on many occasions, especially as it seemed time and again that the Soviet Union would win the race, politicians and officials suggested cutting the seemingly exorbitant program budget because to reach the moon by the end of the 1960s seemed impossible. Rational thinking seemed to say: this isn't a choice worth making — give it up!

Nevertheless, the choice was made. Despite obstacles and exhaustion, heated debate and other pressing matters, the ideals of the undertaking persevered. "We set sail on this new sea because there is new knowledge to be gained, and new rights to be won, and they must be won and used for the progress of all people." Kennedy remarked in 1962 when he spoke of the choice, "For space science, like nuclear science and all technology, has no conscience of its own. Whether it will become a force for good or ill depends on man."

The choices we make affect the impact of our ideals. In trying times, it can be easy to choose what is easier, perhaps when we look to the moon we'll remember that the choice for change is ours to act upon.

Every step contributes to the leap

One of the remarkable pieces of the story of the moon landing is the many hidden figures and small acts that contributed to this monumental project. It's hard to imagine the number of details that went into putting a human being on the moon. While the focus of history is so often on the astronauts who manned the missions in space, one can't help but note the droves of people pictured at mission control — the engineers, controllers, programmers — not to mention the manufacturers, technicians, physicians, and many more.

Listening to stories about the moon landing, I'm particularly struck by the small acts that amounted to the success of the missions. There were the seamstresses charged with stitching together the spacesuits for the mission; women on whose every stitch hung the balance of an astronaut's life and safety. The software engineers who wrote the code that drove the ships and managed myriad functions on miniscule amounts of memory (without the near disaster of overwhelming it).

It is the dedicated work of these people that shows that every act, no matter how small, contributes to the whole. Without one, what was thought impossible might indeed prove to be.  Each person has a part to play in the whole and we must trust that the work we do works toward the greater good we've committed ourselves to, whether or not it is readily apparent or seemingly achievable.

Neil Armstrong's iconic words upon stepping out of the lunar capsule fifty years ago still resonate today: "That's one small step for man, one giant leap for mankind."

Truly, those steps on the moon were monumental, signaling the progress and potential of scientific inquiry in the modern age, and yet, beyond science, the expansive effect and lessons of the Apollo program fifty years on still reveal how far we have to go.

"I really believe that if the political leaders of the world could see their planet from a distance of 100,000 miles, their outlook could be fundamentally changed," said Michael Collins, who flew on Apollo 11 with Buzz Aldrin and Neil Armstrong. "The all-important border would be invisible, that noisy argument silenced. The tiny globe would continue to turn, serenely ignoring its subdivisions, presenting a unified facade that would cry out for unified understanding, for homogeneous treatment."

From that height and distance, Collins argued, we could see that truly we are all one and that, indeed, this place and planet we call home is a finite and fragile place.  With that recognition, we might be able to work towards unity and we might be transformed by mystery.  Then, the giant leap we might take is not only towards greater discovery beyond our planet but also toward better care for our common home and relationships.

As Pope Paul VI poignantly declared in a speech given on the day of the moon landing, the day truly was "a sublime victory" and yet war and hunger still raged on in the world, causing him to ask "Where is real humanity? Where is brotherhood? Where is peace?"

If these are the lessons, principles and ideals embodied in the moon landing, then we still have far to go. Steps surely have been taken towards peace and unity, but many still remain. As scorching summer heat and heated debate threaten to singe spirits and exasperate already exhausted souls in our current day, we must remember the gifts and graces that our history and past accomplishments offer us — we must choose once more to pursue progress for all people, to commit ourselves to the small acts of making change, and to defy the pull of derision and division in favor of a better way of being in this world we call home.

[A Sister of St. Joseph of Philadelphia, Colleen Gibson, SSJ, is the author of the blog Wandering in Wonder and has been published work in various periodicals including America, Commonweal and Give Us This Day. She currently serves as coordinator of services at the SSJ Neighborhood Center in Camden, New Jersey.]

Lessons from the moon landing