What is an immigrant to do now that Donald Trump has been elected? While well-meaning people encourage us to think positively or wait it out, many among us don't have that luxury. The new administration is poised to directly and significantly alter the lives of certain groups of people. My fellow Guatemalan parishioners are in that group, and they're deeply troubled by the promises Trump has made to deport them and to build a wall. His utter disregard for the lives of real human beings completely contradicts his supposed "pro-life" stance.

Last Sunday, after our bilingual liturgy, I invited our Latino parishioners to gather in the cafeteria for a space of solidarity in the wake of the election results. About 30 men and women took their seats in rows of metal folding chairs and scooted close to the brown cafeteria tables. The little ones zipped around, giggling as they played, but the few older children in attendance were quiet. The always-uncertain future of these families had become drastically more uncertain from one day to the next. Uneasiness hung in the air.

First we prayed together. I gave background information on what to expect from our country's political process over the next few months. Then, I asked if anyone had anything they needed or wanted to share with the group.

After several of the most outspoken men offered thoughts from their seats, Angelica stood up. Angelica is a lovely as her name suggests. She is a middle-aged Guatemalan woman of indigenous descent, and her high cheekbones sing of determined strength born of a hard life, her soft eyes reveal a gentle soul rooted deeply in faith. God is her everything. She distributes Eucharist at our weekly bilingual Mass with a reverent joy that reminds me it is indeed "el cuerpo de Cristo" that I receive. Her graceful posture always impresses me, and today was no different. She had something important to say.

"I need to tell you what happened to me," Angelica began, pausing at the end of the sentence as she often does for emphasis. "I was shopping at Kroger on Thursday, minding my own business. Someone I didn't know approached me. They said to me, 'Haha! Trump won; now you have to go back to your country!'"

My heart plummeted into my stomach as tears puddled in Angelica's usually sparkling ojos. I cringed to imagine this random stranger, ignorantly cackling as Angelica's cheeks burned crimson in shame, her heart breaking.

When Angelica finished, a man in the back row lifted his hand into the air. His name is Andres.

"Hermana," he said, "Yo tengo miedo. I am scared. I know I'm grown man, but I have to be honest and tell you that I have cried in the last few days. I stayed up late to watch the election results, and I didn't sleep the rest of the night once Trump won."

Andres and his wife Cecilia have six kids, four of whom are U.S. citizens. Lying in the dark with his eyes open after Trump's win, Andres' brain raced with heart-wrenching scenarios. He could be deported, or his wife, or their oldest children, or all of them. If just one parent is deported, would the other stay in the U.S. with the children? Would they all go back to Guatemala, allowing the family to be together but severely diminishing the opportunities for and safety of their children?

"How would I live?" he uttered in a quivering voice. "I can't imagine our family separated."

The adults aren't the only ones who feel the anxiety. Kids hear what we hear, and they absorb it. On Wednesday morning after the election, our school principal called me at the parish office and asked if I could pop over to the school for a minute. Distressed, she told me, "We have some situations over here with some of our immigrant families and students."

Some of the students had come to school upset and confused about what's going to happen to them. They were asking about their parents being deported. And the most unsettling news was that several families had already bought tickets back to Guatemala. They thought that since Trump won, they had to leave immediately. Even after they learned this wasn't the case, they still decided to follow through and not take any chances with what is to come.

Because Trump has no political experience or policies on the books, it is impossible to look to precedent as a guide for what to expect from his administration. But his anti-immigrant rhetoric and proposed policies have planted terror in the hearts of our immigrant brothers and sisters.

Our church demands that we not remain complacent. Unfortunately, I know that it's possible for some to hear these stories and still compartmentalize. Knowing about the suffering of our sisters and brothers isn't enough. People want reasonable, quantifiable answers. I witness it each time I give a presentation about Catholic Social Teaching and immigration. Good-hearted folks ask honest questions that are easy to ask from a comfortable life. Why don't they just get in line? Why don't they come legally? I mean, I don't mind immigrants, but I simply want them to follow the rules. Aren't they a drain on our system?

We talk about how complicated the system is, how there isn't a line for most people coming today, how long it would take for these families to come legally, if ever. We talk about our own connections to immigration, how most of us are where we are because someone in our family lineage decided to undertake the journey of migration. We talk about how it could just as easily be us in these dire situations.

"Yes, but my relatives came here legally," I hear. We then talk about the progression of history, how different the world is now, how the immigrants of today often come the same way that our ancestors did, but there weren't immigration laws then. There was a Statue of Liberty with arms open. We talk about how these people are coming because of similar push factors to our ancestors — poverty, hunger, war — but that in many cases the destitution and danger are even more extreme now.

We talk economics. We explore how undocumented immigrants can't receive government benefits but do pay taxes. We talk about how they work long hours for unfair pay at thankless jobs that sustain our way of life.

We talk religion. We discuss the deep spirituality of our Latino community members and how they are revitalizing the United States Catholic church.

Most people leave my immigration presentations with a new perspective. There are a lot of angles to take, and all of them point to the beneficial presence of immigrants. But if we are looking at immigration through a Christian lens — none of that should matter. Being a Christian is never about "what's in it for me." Being a Christian is never about fairness in the worldly sense of the world. It's not about security or suspicion or selfishness. It's about loving one another. These are people's lives that we're talking about. If we are comprehensively pro-life, we should care.

As we enter the Advent season this Sunday, I am keenly aware that our immigrant families are living in a space of waiting, but not in joyful hope; they wait in dread at the prospect of forced radical life changes, a return to danger and poverty, and prolonged family separation — that could last years. If our own Advent journey is to be authentic, we must let their pain disturb us. We cannot blissfully sing "O Come, O Come Emmanuel" and ignore the Christ who is here and suffering. The Jesus we long for this Advent is in our midst, in the faces of Angelica, Andres, and millions more. As they are forced to wait in this new era of Trump, we must not. As Christians, we need to let them know they're not alone and work tirelessly so that what they dread does not become reality.

[Tracy Kemme is a Sister of Charity of Cincinnati. Author of the blog Diary of a Sister-in-Training, Tracy is excited about the future of religious life! She currently ministers at the Catholic Social Action Office in Cincinnati and as the Latino Ministry Coordinator at a local parish.] 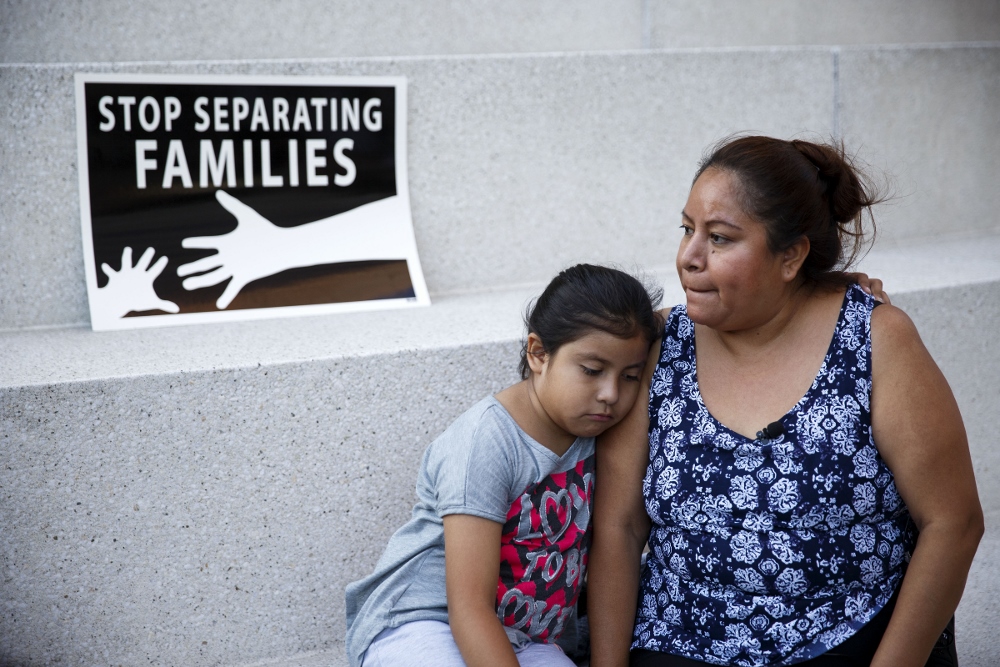