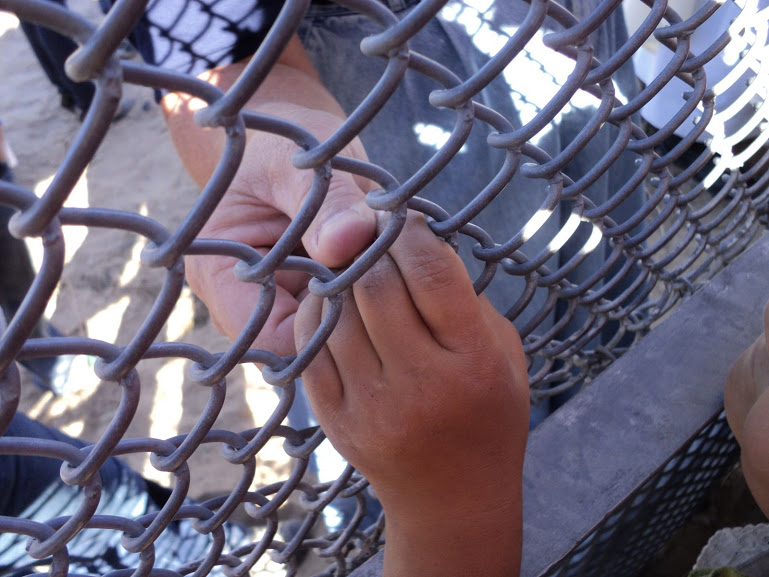 The sign of peace happened through the border fence during the All Souls Day Border Mass, 2012. (Tracy Kemme)

I’ll never forget the first time I saw the U.S.-Mexico border at El Paso, Texas. It was evening, and the growing darkness accentuated the eerie sight: fences upon fences, barbed wire and enormous flood lights.

I was a sophomore at the University of Dayton traveling to El Paso and to Ciudad Juarez, Mexico, for a spring break immersion. After arriving in El Paso, our group packed into a big white van and rumbled over the bridge that leads into our neighboring country. That’s when my eyes first beheld the appalling physical border. In addition to the three rows of barbed-wired fences flanking the Rio Grande, Border Patrol agents were roving along on the El Paso side every few hundred feet. I felt empty as I took it all in.

We stayed that week in a small Mexican border community called Anapra, located to the west of downtown Ciudad Juarez. As we talked with people on both sides of the border, we learned what drives people to migrate and about what our broken U.S. immigration system does to them. They were stories of great poverty, violence and injustice.

I distinctly remember one woman from Central America who was staying at Annunciation House, a shelter for immigrants that has been in downtown El Paso since the late 1970s. We sat in a tight circle of plastic chairs as she shared that her husband had been killed by a gang in their village. Knowing she could never earn enough there to support her three small children, she made the agonizing decision to leave those little ones with her mother and undertake the perilous journey north. She walked for miles. She rode on the top of trains, something that can cost migrants their limbs or their lives. She waded through rivers. Eventually, she was caught entering the U.S. Her beautiful dark eyes filled with tears as she spoke of her deceased husband, her children in Central America, and her anxiety about what she would do now.

For the first time, I encountered the human face of immigration. This woman’s pain brought to life the “push factors” that drive migrants to risk their lives on a journey to the U.S. I saw that the issue was much bigger than black-and-white or right-and-wrong.

After college and two years of post-graduate volunteering in Ecuador, God drew me back to the border that had so impacted me in 2006. I was searching for a place to minister as well as discern religious life. I moved in with a community of three Sisters of Charity of Cincinnati who make their home in Anthony, New Mexico, just west of El Paso.

These sisters cross the border frequently as they run Proyecto Santo Niño, a community center for children with special needs in Anapra. We usually accessed Mexico from the New Mexico port of entry and drove along the border fence for a few miles to arrive at the Santo Niño. Even after a few years and probably a few hundred border crossings, the border never ceased to be a startling sight. For our Mexican friends, it is a stark reminder that they are not welcome into the prosperity they see just miles from their homes. 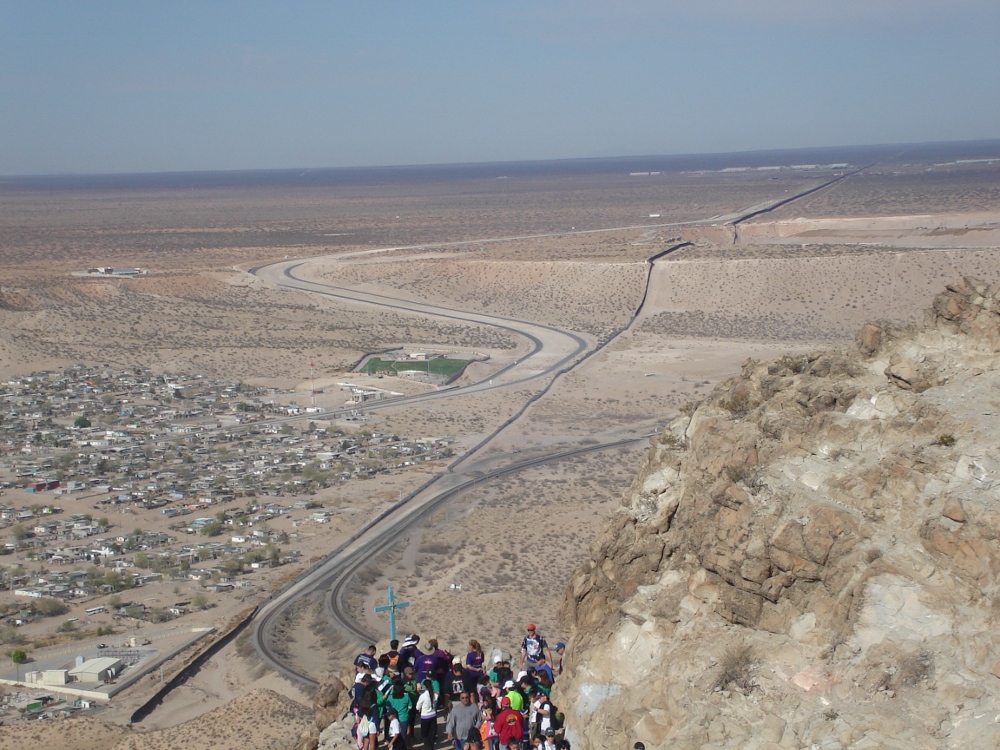 The border fence is seen dividing Sunland Park, N.M., and Anapra, Mexico during the Migrant Way of the Cross on Good Friday, 2013, from Mt. Cristo Rey. (Tracy Kemme)

I cringe when I hear the phrase “border security” mentioned over and over again in discussions of immigration reform. Those of us who have seen the border know – the last thing we need to do is pour more money into weapons, Border Patrol agents and big fences. In 1993, under Operation Hold the Line, Border Patrol militarized the downtown sector of the El Paso border with more agents and more technology as a show of force. San Diego followed suit in 1994 with Operation Gatekeeper. In 2011, President Obama doubled the number of Border Patrol agents. Border security is not the issue.

Migration continues because the push factors have only worsened. NAFTA and our country’s demand for drugs contribute to the destitution and violence in Mexico and Latin America. Instead of staying home after traditional immigration routes were closed, immigrants began and continue to traverse the treacherous deserts. Migrant deaths have soared in the last 22 years due to increased border security.

Every year on All Souls Day, people gather at the border fence to celebrate a binational Mass in memory of all those who have died crossing the border. In 2010, I attended the Mass on the Mexico side with some of the families from Proyecto Santo Niño. It was the height of the deadly drug war with an average of eight murders a day. When the bishop invited us to share a sign of peace with one another, I felt myself begin to weep from a place deep within. Usually, the sign of peace was a friendly gesture that I enjoyed, but here, it was urgently meaningful. How desperately these people of Ciudad Juarez needed peace in their lives; how desperately immigrants need peace in their lives. And how unsettling that the fence prevented us from embracing or shaking hands! We were reduced to touching our fingertips together through the chain links of the fence. 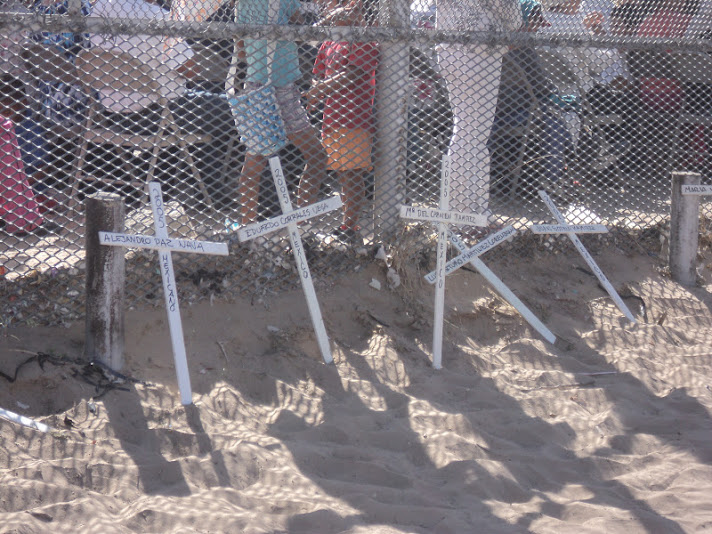 Crosses lean against the U.S. border fence in memory of those who have died in migration. (Tracy Kemme)

As I sit typing under an oak tree on the lush, green Motherhouse grounds in Cincinnati, I am far from that border fence. But here in the Midwest and throughout the country, the border fence is echoed in intangible barriers that rise against immigrants daily. As part of my novitiate, I volunteer one day a week at Su Casa Hispanic Center. We see families working grueling jobs for little pay, struggling to eat and keep a roof over their heads, discriminated against, torn apart by deportation, separated from loved ones at home, living in constant fear, and trying to locate loved ones who’ve been apprehended by Border Patrol or police and are somewhere in a detention center.

And then there are the perhaps unconscious barriers that we erect. I am struck by how often immigration is divorced from faith. The issue is rarely mentioned in churches, even as the U.S. bishops insist that support for immigration reform flows directly out of Catholic Social Teaching. It seems that extreme patriotism, entitlement and a false sense of justice muddle our idea of who our neighbor is. We rationalize the suffering of our sisters and brothers by asserting that they are criminals. It is easy to say, “They’ve broken the law.” It’s more complicated to truly place ourselves in their shoes and consider the Golden Rule.

It’s a pivotal moment in our nation regarding immigration policy. I’m praying that all of us, but especially people of faith, will speak out. Jesus’ voice in Scripture whispers undeniably in my heart, “Love one another as I have loved you.” It certainly wasn’t, “Love one another – but by golly, send those illegals back where they came from!” No, the love Jesus spoke of went far beyond the law and never came attached to any condition.

If we touch our fingers to the fences we’ve constructed, we will feel the fingertips of our sisters and brothers pressing back against ours. Let us choose to be signs of peace and instruments of love that knows no borders. 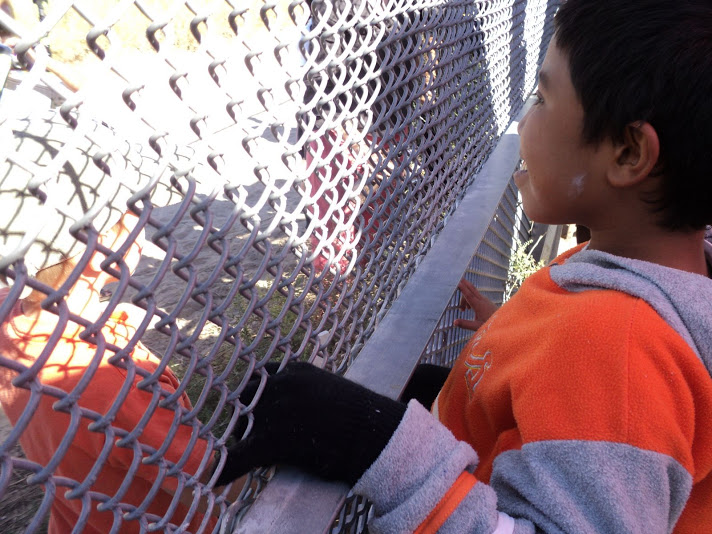 Brallan, a boy with spina bifida who attends Proyecto Santo Nino, peers into the U.S. through the border fence. His shadow can cross this arbitrary line, but he cannot. He wonders how his life might be different if he could go to the U.S. (Tracy Kemme)

[S. Tracy Kemme is a novice with the Sisters of Charity of Cincinnati.  Author of the blog, Diary of a Sister-in-Training, Tracy is excited about the future of religious life! She has a background in Hispanic ministry, having served both in Ecuador and at the U.S.-Mexico border prior to novitiate.]

The human right to migrate, and the right to stay