Scenes from sharing the journey 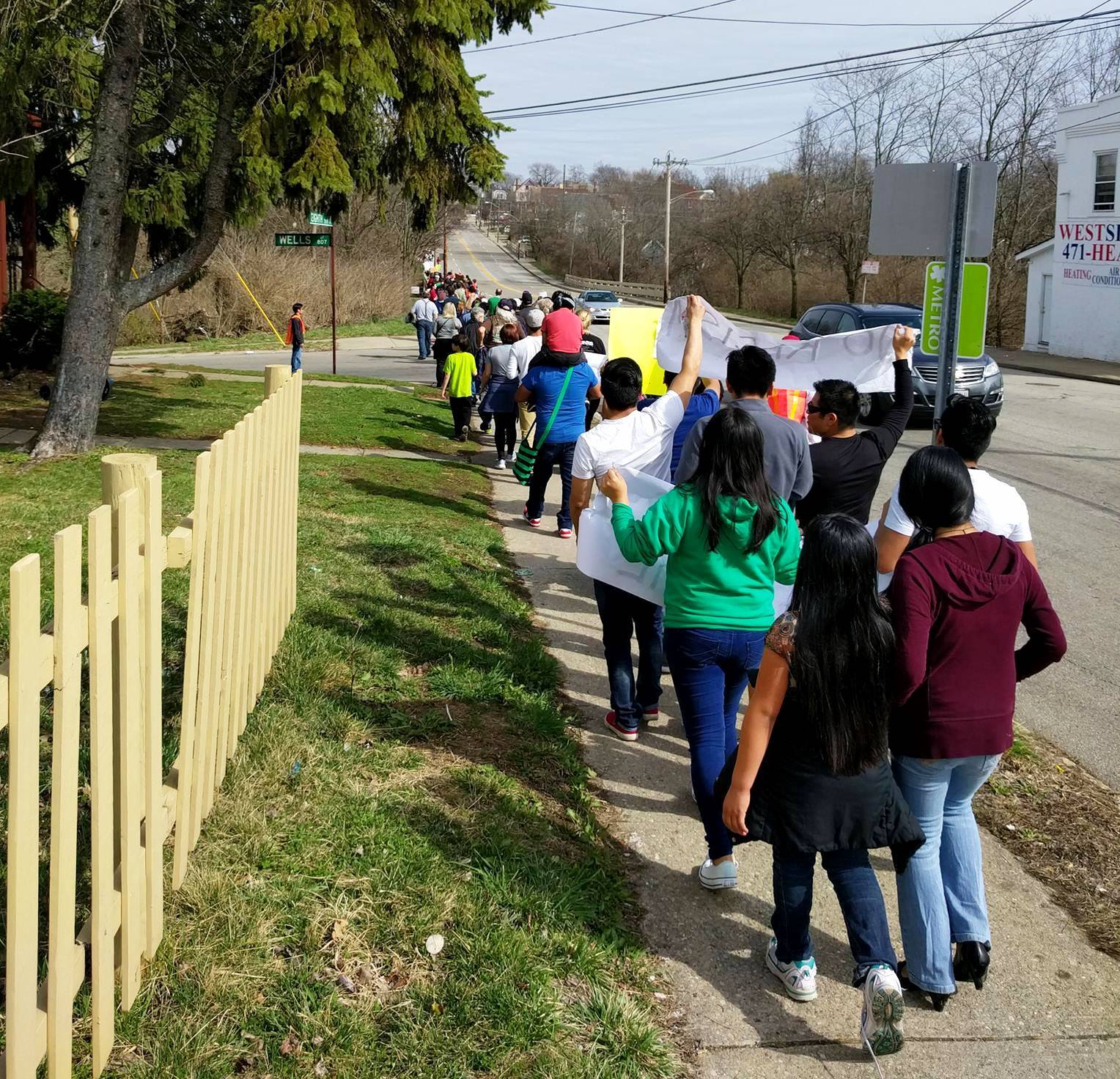 Immigrants and allies walk through Sr. Tracy Kemme's neighborhood during an immigration rally in 2015, a symbolic act of sharing the journey. (Jeremy Bauer)

Editor's note: The names in these stories have been changed to protect privacy.

"Biblical revelation urges us to welcome the stranger; it tells us that in so doing, we open our doors to God, and that in the faces of others we see the face of Christ himself."

Pope Francis wrote these words in 2015. On Sept. 27, he will kick off Caritas Internationalis' worldwide Share the Journey campaign, a two-year effort urging solidarity with migrants and refugees through a culture of encounter.

In ministry, I walk with many beloved migrants, but I'm never quite sure how to characterize what I "do." The pope's words and the new campaign give me insight: I share the journey. And it's true: In doing so, I have seen the face of Christ.

In anticipation of Share the Journey, I want to share snapshots of my experiences with you. I dedicate this column to my brother and sister migrants who are the real presence of Jesus in my life. I pray that, through these three sacred stories, you will be inspired to find new ways to "share the journey" — and, in response, to act for justice.

There wasn't yet a glow on the horizon as I pulled up in front of Manuel's downtown apartment. "Estoy aquí," I texted him. The street was quiet. Manuel climbed into the passenger seat, and his teenaged daughter, Laurita, crumbled sleepily into the back.

"Gracias, Hermana," Manuel nodded, and we were off.

Manuel's undocumented son, Pablo, was in jail. An officer pulled him over when he accidentally turned the wrong way on a one-way street. Because he was deported once several years ago, the traffic infraction led to U.S. Immigration and Customs Enforcement arresting him in front of his wife and 1-year-old daughter.

Saturday morning was jail-visiting time. Third in line, we registered for the visit, and Manuel put a $20 bill into an "Inmate Deposits" machine for his son. The waiting area grew more saturated by the minute until a voice over the PA system announced that group one could begin. Manuel and Laurita beckoned me to follow them through the white door. Along the left, men in green jumpsuits filed out to take their seats in narrow booths, and family members rushed to the glass when they found their loved one.

Manuel moved emotionally to sit down in front of a small Guatemalan man who couldn't be more than 20. Pablo's sad eyes met his father's as they both lifted the phones that would allow them to communicate. Manuel began tenderly, "Mi hijo."

Laurita stayed back by me, overcome. "He's so skinny," she whispered, teary-eyed.

The visits are supposed to be 30 minutes, but after just 15, a supervisor bellowed, "That's it! Say your goodbyes!" I looked up and down the row as hands lifted to the glass panes, soaking up the precious time and limited contact. Manuel and Laurita huddled close to the phone, offering their last few words of love and encouragement. Pablo cried as he shuffled back to his cell.

Laurita bolted through the double doors into the crisp morning air and began to shake with sobs. "They can't deport him!"

Manuel's face was pained but brave as he cradled his daughter. "God is with us," he sighed toward the now-rising sun.

We're standing in the airport security line when Adriana brings it up. "Have you heard about DACA?"

Adriana, just shy of 21, is the daughter of Mexican immigrants. She studies biology at a local university and is on track to be the first person on her mother's side of the family to graduate from college. Today, we're traveling together to a Sisters of Charity discernment weekend because Adriana is considering religious life.

In the midst of it all, she is worried about her friends.

Many of Adriana's classmates are recipients of the Deferred Action for Childhood Arrivals program. Like her, they are bright, hard-working young people, enriching our community with their grit and hope. However, these days find them suspended in powerlessness. It is rumored that the Trump administration could end DACA. As we await our flight, she is Facebooking with them.

"They're OK," she sighs. "They're just waiting, posting updates on social media and refreshing the news to see if an announcement has come out." She pauses. "Their lives could change so much. I wonder — would they have to leave school right away? It's crazy. If I talk about it too much, I'll cry."

On Sunday night, she finally does. After a weekend of service and reflection on vocation, we're in the chapel for Taizé prayer. During the time for spontaneous intercessions, Adriana courageously voices her prayers for her friends, and they come out in gasping tears. I hear profound pain, fear, anger and love. And I even sense something akin to survivor's guilt.

"We're so similar," she weeps, "but just because I was born here, I don't have to worry like they do."

After the service is over, Adriana sits silently in the flickering candlelight, more peaceful now but still deep in prayer.

Tidying up the chapel the next morning, I notice an Our Lady of Guadalupe figure on the windowsill, right behind where Adriana had been sitting. I smile at the reminder of Mary's closeness to her people, but I appeal to her once more: "Mamita, ayúdanos."

My cellphone rang just as I laced up my running shoes. It was my only free evening that week, and I was longing for a workout and some relaxation. I saw the call was from Luis, a parishioner from Holy Family Parish where I minister. I answered, somewhat begrudgingly.

"Hermana, ¡buenas tardes! Dios te bendiga," Luis began kindly, as he does every conversation. He went on to tell me that his work had sent him home with forms to fill out and return the next day. "They're in English, Hermana, and I don't know anybody else who will be able to help me tonight."

I sighed, conflicted and hesitant. Then I put myself in his shoes. I told him to meet me in five minutes at the diner down the street.

As he walked into the restaurant, my heart filled with compassion. Luis is a short, scrawny man, but he has an enormous, generous heart. Tonight, he looked exhausted as usual, wearing the same oversized button-down he wears to church. Over cheese coney dogs, we looked through his stack of what I discovered to be health insurance papers. Luis works under someone else's Social Security number, so it's a good thing he reached out for help. An error could have had consequences.

I asked him if these papers were still from the same job; I knew he had been cleaning a grocery store third shift for some time.

I took in the image of Luis' mangled hands on the table as we talked. Each of his fingernails is worn down to almost nothing, some of them colored like bruises, and the tips are perpetually black. The compassion in me pulsed, tangled with sadness, guilt, and anger at injustice.

He continued. "Hermana, I wanted to tell you. I've been thinking about going back to Guatemala for good next year. I'm just so ... tired."

I peered into his dark eyes, sunken into his wrinkled, weary face. He's not an old man, but life has worn on him. He hasn't seen his wife in six years, and many of his children are still in Guatemala. He has worked so hard here, keeping almost nothing for himself to make sure his family can eat and go to school.

"You are an amazing person, Luis," I offered, but the words seemed to fall short of the deep admiration swelling, almost to tears, in my abdomen.

"I'm just so grateful to God that I'm alive and that I've had this time to try to give my kids some kind of future. I know God has always been with me, and I know he will be when I go back," Luis said, the simple words flowing out naturally from his humble soul.

We hugged before parting ways, me to go for a jog and him to grab a few hours of sleep before his next grueling night and day.

I couldn't shake the sensation, nor did I want to, that I had just dined with a saint.

In sharing the journey with migrants and refugees, we come to know Christ alive in our time, and we discover our call to become Christ's instruments of justice and love. I invite us all to respond whole-heartedly to the Share the Journey campaign, for two years and beyond. May our encounters with migrants transform us so that in turn, we work with migrants to transform the world.

[Tracy Kemme is a Sister of Charity of Cincinnati. Author of the blog Diary of a Sister-in-Training, Tracy is excited about the future of religious life! She currently ministers at the Catholic Social Action Office in Cincinnati and as Latino ministry coordinator at a local parish.]

Migration | Scenes from sharing the journey

Our shelters are ready and waiting