We are one body: Separated by unjust immigration policies; united in Christ 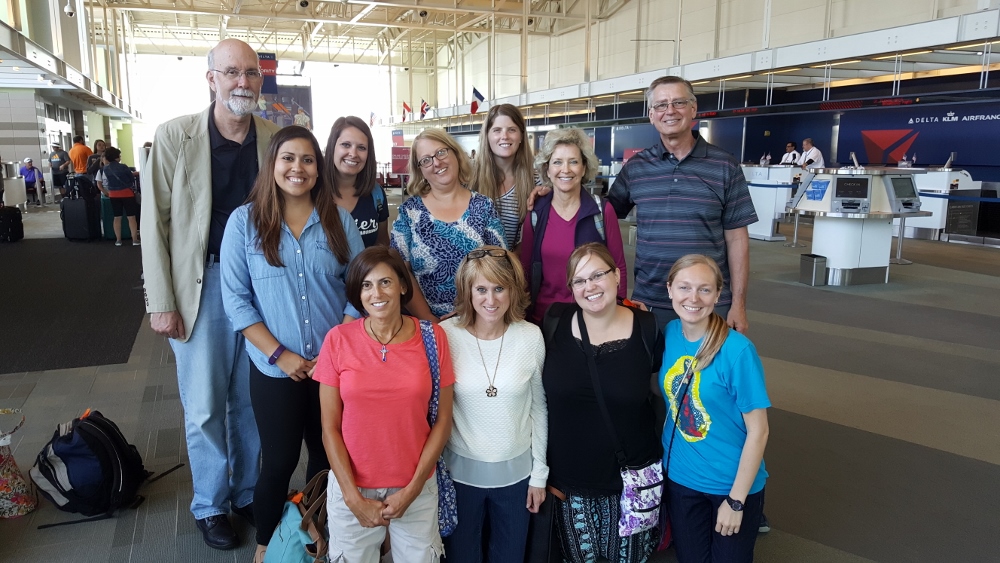 On June 15, we gathered at the Cincinnati airport to begin a journey. Our group was comprised of 11 teachers and parish ministers from the Cincinnati archdiocese, traveling together to visit the villages from which our Guatemalan students and parishioners come.

We first flew from Cincinnati to Atlanta and then to Guatemala City. The next day, we rode a 15-passenger van through the mountains for five hours and arrived in San Marcos. From there, our trusty van carried us for two and a half more hours on even windier roads, and we reached our destination: Concepción Tutuapa.

Concepción is a little town in western Guatemala surrounded by 72 tiny aldeas, or villages. According to Fr. Guadalupe, the pastor of the area, there are about 80,000 residents. Most of the Guatemalans who have migrated to Cincinnati come from Concepción. They walk, swim, ride trains and buses, and traverse deserts to make the more than 2,500-mile journey. And now, they are a part of Holy Family parish, where I minister in Cincinnati. They are gift to our community. 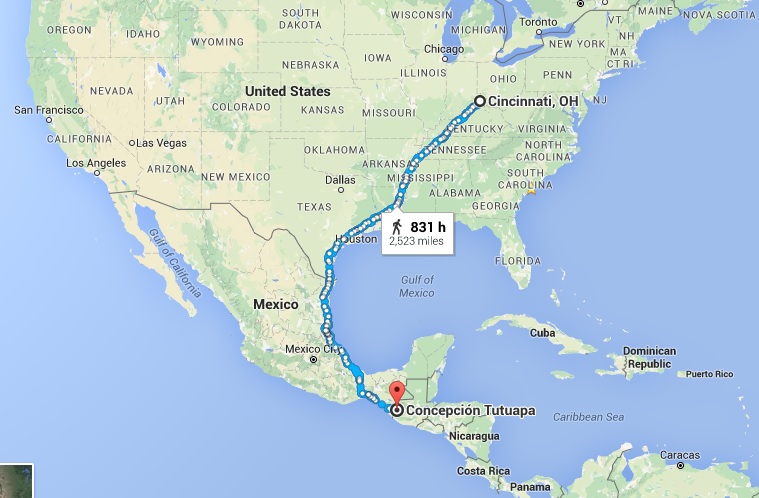 The route one might travel from Concepción to Cincinnati. (Google Maps screenshot)

We knew that we might meet relatives of our families on our trip. In the days before we embarked, fellow parishioners told me where we might encounter their parents, cousins, children and friends in Guatemala. I hoped, but I didn't know how it would happen.

On Sunday morning in Concepción, after a breakfast of tamales and fresh fruit, we walked a few blocks to the striking white church at the center of town. We stood outside, a conspicuous group of gringos among the many people congregating for Mass. I took in the moment through sight, sound and smell. The sea of activity, painted by brightly colored indigenous clothing, felt surreal.

Soon, I noticed an older woman in her traditional garb approaching us. She greeted each one with a smile and press of the hand. I was grateful for her welcome. I never expected the words that came out of her mouth next.

My heart stopped for a second. "Ever Reynoso?" I asked.

"Yes, I know him," I replied, fixated on her face and its beautiful brown wrinkles. "He is a member of our parish. I'm Sister Tracy, and I minister with the Latino group. How do you know him?"

We embraced immediately. I called over a few other travelers from our group who know Ever and his wife, Margarita, and their seven children. We hugged his mom tightly and told her how wonderful he is. Of course, she already knew.

"He is such a good person, my son," she began, as water appeared in the creases at the corners of her eyes. "I haven't seen him for 12 years, since he left for the U.S."

At that, she shook her head from side to side, in pain and perhaps disbelief. Then, she lowered her face and covered her eyes with both hands as the tears came. We extended our arms to her, and she melted into our hugs.

Ever and Margarita left Guatemala when they were a young couple with two small children, a boy and a girl. They both hold teaching degrees in Guatemala, but they could not find steady jobs that would sustain their growing family. As so many of our Guatemalan parishioners have told me, "Simplemente, no hay trabajo." Simply, there's no work. Ever came first to the United States, and Margarita followed a few years later, almost getting lost in Mexico on the treacherous journey. Since coming, they've had five more children. Two years ago, they brought their oldest two children, now junior high age, to be with them in the U.S. In all this time, they haven't been able to go home. If they did, they wouldn't be able to get back in. And their life is here now. Five of their children are U.S. citizens, and several of them are on the autism spectrum. They know staying is the only chance for a good life for them.

I often hear about the pain of family separation from people like Ever and Margarita in my community here. Now, I have also touched the pain felt by those left behind.

For 12 years, Ever's mother, M­­­­­­­­­­­­­­­­­­atilde, has not laid eyes on her son, and unless something finally changes with our immigration system, she may never see him again. She has never met her five U.S.-citizen grandchildren. The technology isn't sufficient yet in Concepción for them to video chat. She is grateful that she can hear Ever's voice every few weeks on the phone. But, she said, laying her weathered hands on my shoulders and peering into my eyes, "It is not the same as seeing someone in front of you, hugging them, feeling them."

Mixed emotions washed over me. I felt joy and wonder at having made this connection. Stronger, still, I felt deep sadness and guilt. How wrong that I could travel freely to stand here with Ever's mother when he cannot.

The story is all too common, and it repeated itself numerous times during our four-day stay in Concepción. Shortly after meeting Matilde, I met a 16-year old girl whose parents are both parishioners at Holy Family. The only photo she has of them on her phone shows them standing in the Holy Family cafeteria. She hasn't seen them for 10 years. One of the teachers in our group met the older sister of one of her fourth-grade students. The two sisters have never met, as the younger one was born in the U.S. after their parents migrated. In the congregation at Mass and in our visits to schools, we met parents, children, cousins, aunts and uncles, grandparents, nieces and nephews, and friends of our beloved Guatemalan parishioners.

Mass in Concepción after meeting Matilde was beautiful and, for me, helped identify what we were experiencing. Fr. Guadalupe invited me to join him on the altar to translate the homily into English for our group of travelers. Also with him was an indigenous female parishioner, who would translate the message into Mam, the native language of the area.

Fr. Guadalupe began his homily by thanking us for making the journey to his village. He reminded us that although many of us are teachers, this week, we were called to be learners. He lamented the current political climate in the U.S. and highlighted the fear and hurt anti-immigrant rhetoric causes to the Concepción community, both in Guatemala and in the U.S. 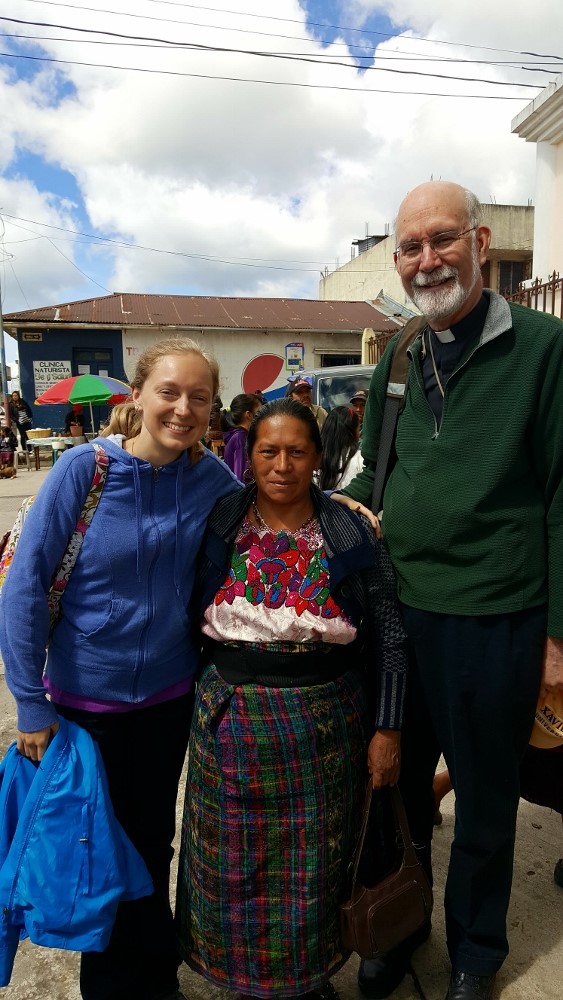 "In fact, let's see something for a moment," he said, now addressing the whole congregation. "Who here has family in the United States?"

Almost every hand in the church went up. We were shocked. I asked if I could take a photo of the impactful image. He named the pain that we had been experiencing, the pain of family separation, as something we must enter into. He implored us to continue to welcome the Guatemalans in our midst in the U.S. and to work for comprehensive immigration reform, as the U.S. bishops have also urged.

And then, he reminded us why this is not an optional piece of living out our faith. 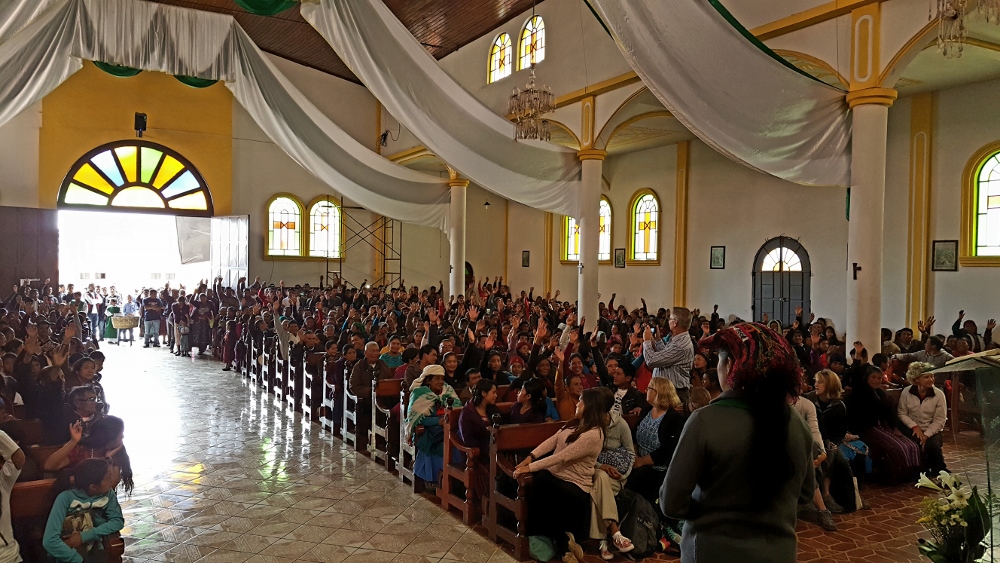 Parishioners in Concepción, Guatemala, raise their hands to show that they have family in the United States. (Tracy Kemme)

Fr. Guadalupe posited that we could add to the passage from Galatians, "There is no American or Guatemalan. There is no English-speaker or Mam-speaker. There is no immigrant or citizen. We are all one in Christ Jesus. We belong to Christ and one another."

Looking out over the packed church and holding the treasured Guatemalan community in Cincinnati in my heart, I felt, with awe, the unity that Paul and Fr. Guadalupe describe. Present in the congregation were people from different countries and traditions, and we were hearing God's word in three different languages. But we were gathered around the same table, united in the unbreakable bonds of Love.

While in Guatemala, we received word that the Supreme Court tie prevented DACA+ and DAPA from moving forward. It was a saddening blow, especially as we witnessed the poverty and heard stories of the violence that send people to our borders in the first place. But this encounter with my family in Guatemala has only deepened my convictions and strengthened my loyalty to my Guatemalan family here.

As we said good-bye to Matilde on our last day in Concepción, she handed us some gifts to take to her son, Ever, and his family. In one bag was her fresh baked bread, which Ever had not enjoyed in 12 long years. When he tasted the bread this week, he must have tasted true Eucharist. Thousands of miles and unjust immigration policies divide families. But our faith says that we are one in Christ Jesus.

In honor of Matilde, Ever, and so many other loved ones, I pray to work to make that oneness more a reality. I invite you to do the same.

[Tracy Kemme is a Sister of Charity of Cincinnati. Author of the blog, Diary of a Sister-in-Training, Tracy is excited about the future of religious life! She currently ministers at the Catholic Social Action Office in Cincinnati and as the Latino Ministry Coordinator at a local parish.]

Migration | We are one body: Separated by unjust immigration policies; united in Christ

What can we do besides rage, pray?

UN grapples with updating definitions of 'migrant' and 'refugee'