What I hope my first arrest means 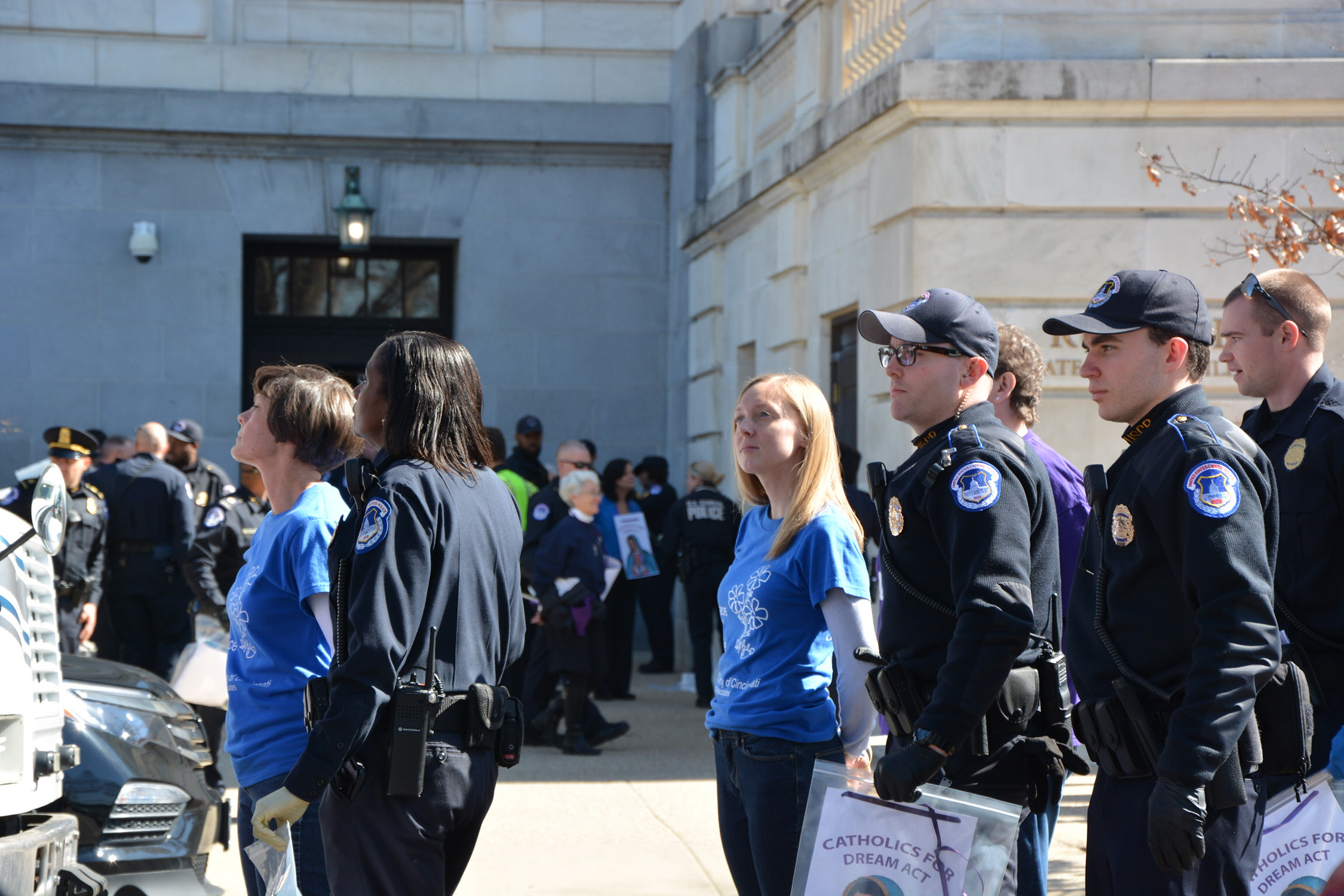 Imagine: You're a high school student in a Midwest town that's been your lifelong home. Your parents migrated from Guatemala when your older sister was just a toddler. You were born here, so you've only heard stories about life before the United States: the debilitating poverty in the pueblo; the grueling two-week journey to the border on trains, buses, and foot; thirst, extreme heat, and exhaustion in the desert.

Since those early days, your parents have labored long hours in backbreaking jobs for little pay. The constant anxiety of living under the radar hasn't stopped them from dreaming about a future full of promise for you and your siblings.

Your older sister is your hero. Although you're only a few years apart, your lives are different. You are a citizen; she is undocumented. Like you, she has spent her life in this Midwest town, at the same schools and the same church. Like your parents, however, she was always vulnerable to deportation. Your throat tightens with imminent tears when you think about it.

Then, in June 2012, President Barack Obama initiated DACA: Deferred Action for Childhood Arrivals. Your sister and others like her could apply for temporary protection from deportation, and they could get a driver's license and work. There was still no path to citizenship, but at least she didn't have to fear being ripped away to a country she doesn't know. She's been the pillar of your family, driving you to school and activities, working to support the family, and going to college.

Now, everything could change. President Donald Trump decided to cancel DACA in the fall, charging Congress with the task of passing legislation by March 5. Action in the courts shifted the sense of urgency around that date, but more than 22,000 youth have already lost their DACA protections. Your sister's future is in our legislators' hands.

The above account is true for thousands of families in the United States. Ministering with immigrants for more than a decade, I know too many stories about the complexity and heartbreak inherent in our broken immigration system. As a follower of Jesus, I love them, and I'm compelled to do for them as I would want done for myself.

And it's more than that. During this National Catholic Sisters Week, it's important to talk about my vocation as a Catholic sister. My vows have made me a sister to all people. If someone is suffering, it is as if my very own sibling is suffering.

So when the call came from Faith in Public Life to do civil disobedience in support of a clean DREAM Act, these words pulsed in my heart: Your sisters' and brothers' futures are in our legislators' hands.

The decision wasn't instant. I felt drawn into deep discernment, a process I recounted on my blog. In the end, the call became clear. With full support from my congregation, two sisters, an associate and I traveled to Washington, D.C., for the National Catholic Day of Action with Dreamers. On Tuesday, Feb. 27, 42 of us were arrested at the Capitol.

What the arrest means to me

Nonviolent civil disobedience was a profound experience of living the Gospel and an expression of my Lenten practice. Our Lenten Scriptures urge us to action.

Isaiah 58 speaks to us of a true fast: "Thus says the Lord GOD: Cry out full-throated and unsparingly, lift up your voice like a trumpet blast ... This, rather, is the fasting that I wish: releasing those bound unjustly, untying the thongs of the yoke; setting free the oppressed, breaking every yoke; sharing your bread with the hungry, sheltering the oppressed and the homeless; clothing the naked when you see them, and not turning your back on your own."

Matthew 25 reminds us that each person we set free, feed, welcome, shelter, and care for is Jesus himself: "Amen, I say to you, whatever you did for one of these least brothers or sisters of mine, you did for me."

The moments surrounding the arrest are forever captured in my senses. Friends have asked if the cameras were distracting or if getting cuffed was intimidating. I have to say no to both. Instead, it was all prayer. 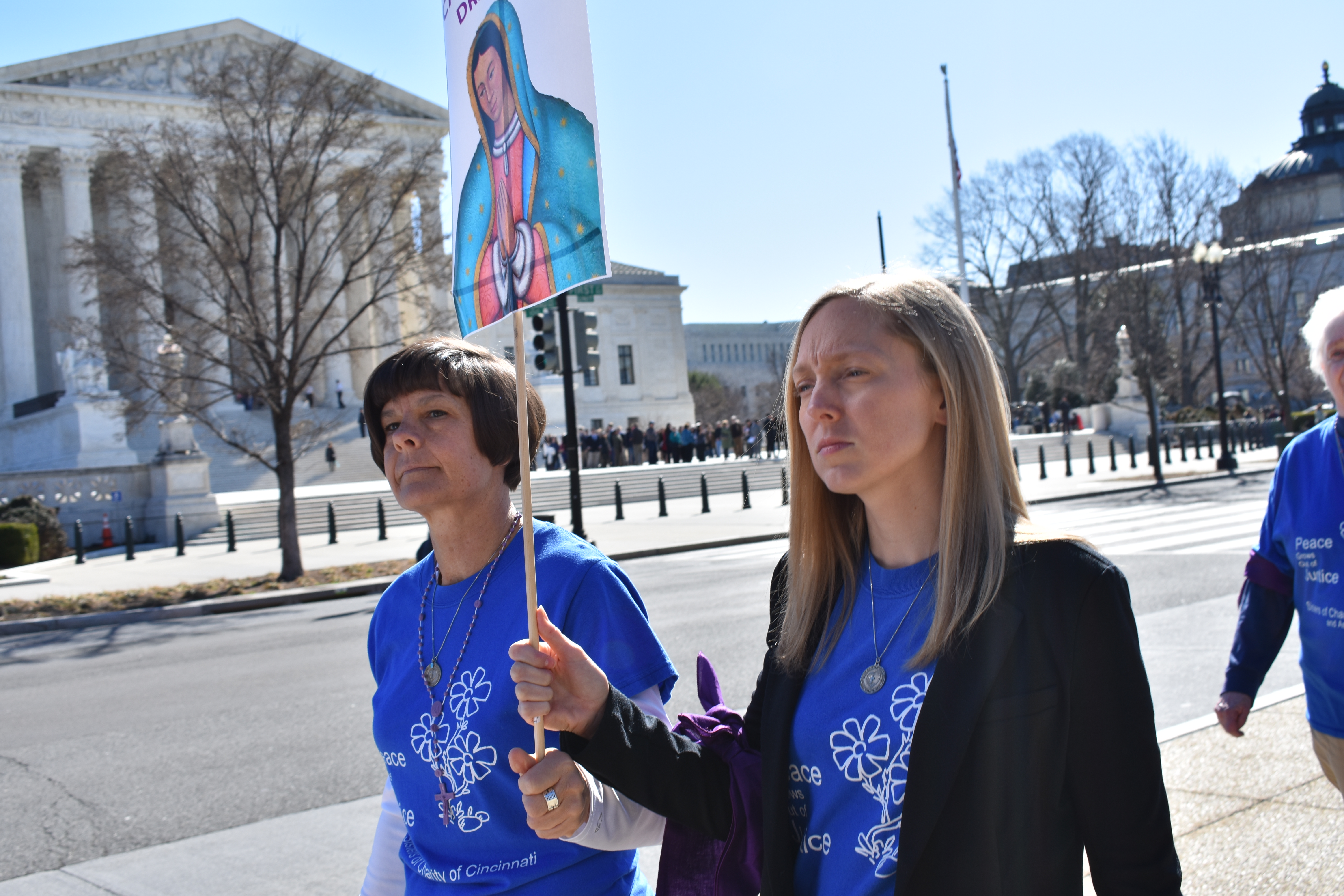 My heart was steadfast and centered because I knew who I was there for and with. I saw in my mind's eye hundreds of faces of beloved Dreamers, immigrants living in the country illegally, and their families. I was buoyed by thousands across the country praying and advocating in solidarity. I felt intimately connected to the beautiful human beings filling the elegant Senate rotunda with song and prayer. And I sensed the palpable presence of Jesus.

The action was a sincere response to God's call that flooded my soul with inner freedom. Power pulsed through me as I stretched my wrists behind me to the arresting officer because I truly believed in the rightness of our cause. It was downright beautiful, with "Amazing Grace" echoing high into the dome above us as we were led away.

Although the consequences were insignificant compared to what many have given for the sake of justice, including their lives, I was grateful to be able to offer myself in a small way. It felt like another step on my journey of discipleship. It shifted something in me, solidified that my deepest longing is to surrender all that I am for the mission of Jesus, no matter the cost.

What I hope the arrest means to the world

Now that more than a week has passed, I find myself asking: What was it all for? I hope and pray that our collective effort has some lasting impact.

First, I hope our action touched the hearts of immigrants everywhere. I hope when they saw us in cuffs, they know it is because we want to see them liberated. I especially hope we fueled the fire of courage in DACA recipients.

They have organized tirelessly for years, fighting for their rights and the futures of their families. They have not given up, and I want them to know that we won't, either. We are in it with them for the long haul, pressing for comprehensive immigration reform with a path to citizenship that keeps families together. 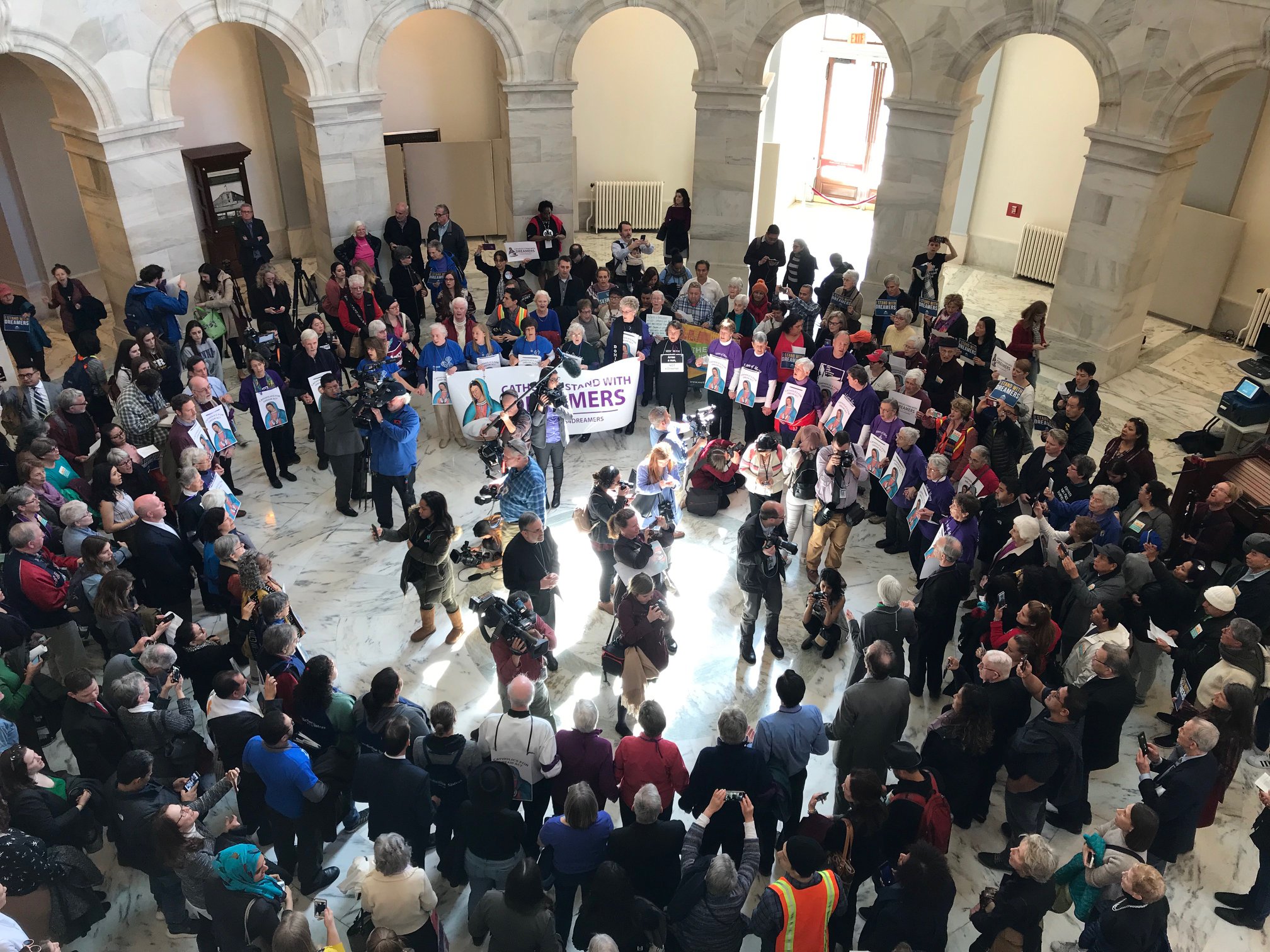 Demonstrators in the rotunda of the U.S. Capitol for the Feb. 27 National Catholic Day of Action with Dreamers (Provided by PICO)

Second, I hope that somehow, our action helped bend the arc toward justice for immigrants. The March 5 DACA deadline passed, and our members of Congress did nothing. But I hope we pricked their consciences. I hope some of them were moved. I hope they take notice as echo actions continue around the country.

I especially hope our Catholic legislators consider the immorality of their inaction. I pray that our effort, in conjunction with so many others, will shift the political will and our leaders will choose to be on the right side of history.

Third, I hope our witness awakened consciousness about the plight of immigrants. Many Americans form anti-immigration opinions with no grounding in fact or experience. I hope that family, friends, and people of faith across the nation took a moment to educate themselves further when they saw that 42 Catholic leaders were willing to risk arrest for this cause. I hope they trust our expertise and passion instead of political rhetoric.

Last, I hope our action inspired, and will inspire, others to action. The outpouring of emails, messages, and prayers for me and my fellow demonstrators strengthened us, but we tried to urge people beyond that.

The real support we wanted was prayer, action, and commitment for immigrants! Along the way, we encouraged everyone to call their senators and representatives to demand a clean DREAM Act. Hundreds of friends and family shared my plea on Facebook. It was amazing; I have to believe that droves of people who wouldn't usually call their members of Congress did.

I hope that momentum continues. I hope that, for some, this was the beginning of new engagement in our democracy. Our representatives work for us, and we need to hold them accountable to the viewpoints that so often stay only at our dinner tables.

And I hope that some will be inspired to even bolder action to make Christ's love visible. Participating in nonviolent disobedience took me out my comfort zone to a new level of commitment. Instead of people admiring that from afar, I want people to join me. How is God inviting you to more radical action on behalf of others?

The Reign of God needs every one of us. Dorothy Day said it best: "No one has a right to sit down and feel hopeless. There is too much work to do." 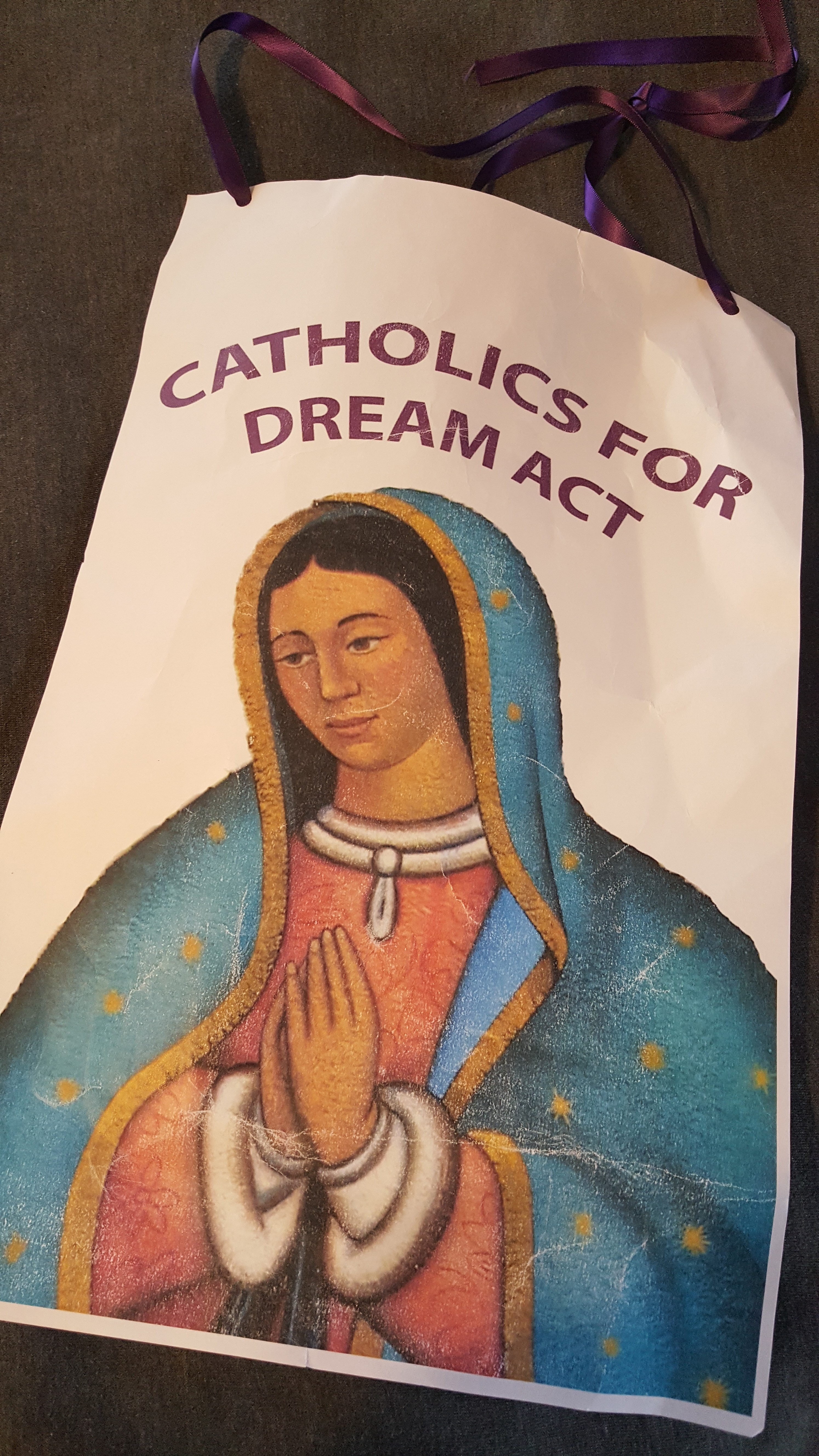 The image Sr. Tracy Kemme and others wore during their prayerful protest Feb. 27 for the National Catholic Day of Action with Dreamers (Tracy Kemme)

[Tracy Kemme is a Sister of Charity of Cincinnati. Author of the blog Diary of a Sister-in-Training, Tracy is passionate about religious life. She currently studies theology at Xavier University and serves as bilingual pastoral minister at a local parish.]

Migration | What I hope my first arrest means

If migration is not criminalized

Refugee students want 'a future after all the trauma they've had'

We mobilized to meet their needs