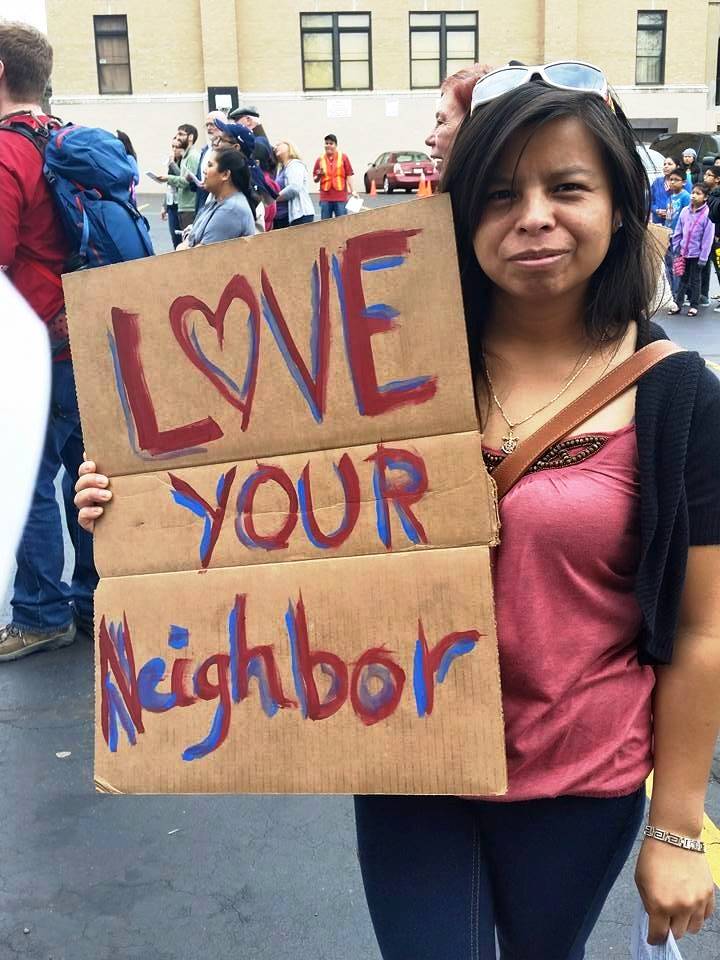 I wonder when U.S. Christians began to lose touch with Jesus.

The thought has crossed my mind from time to time in recent years, but lately it surfaces daily. My heart sinks as Christians in the news and on my Facebook feed rally behind building a wall on our southern border and denying Muslims from war-torn countries entry to ours. I'm baffled as Christians brazenly proclaim, "America first!" while professing to follow the Nazorean carpenter who declared more than once, "The last shall be first, and the first will be last." How does this divisiveness, hate and narcissism reconcile with our faith, in which love is the most important of all commandments? I fear we have forgotten who we follow.

Yesterday's Gospel (Mark 8:27-33) shows Jesus asking his disciples a question that begs to be asked today: "Who do you say that I am?" In the passage, Peter responds with an impressive confession, "You are the Christ."

It was remarkable that he believed this. Jesus was his friend, teacher and companion. Peter knew him as a human in the flesh and blood. For Christians two millennia later, on the other hand, Jesus' divinity is a central tenet of the faith. Many of us grew up learning it in Sunday school. The bolder confession today might be a testimony of who Jesus was as a human. Of course, we proclaim Jesus' death, and we profess his resurrection. But what about Jesus' life? Who do we say that Jesus is? As people who claim to be his followers, the answer to that question also says a lot about who we are, and hopefully, the way we live.

Too often, we distort or water down the human Jesus. How? In the Catholic church particularly, we have failed in catechesis. I lament that religious formation for the average Catholic ends with the completion of confirmation. Many Catholics go through their whole lives without much more depth of understanding than what comes to them in junior high. We would be shocked if teachers or engineers never pursued any kind of continuing education, and yet, in the U.S. Catholic church, we are comfortable with a junior-high Jesus.

Many Christians get stuck in "atonement theology," a focus on Jesus as the sacrificial lamb who bore all of our sin on the cross and rose to save us from that sin. There is truth here, but something is missing. Again, it was the way Jesus lived that got him to the cross!

Our culture seems to be most comfortable with a Jesus that fits on a silver cross necklace or a family room decoration. We like a Jesus-and-me relationship, where we can cling to him as our savior but aren't required to move out of our comfort zones.

We can be Christian and, at the same time, focus our energy on amassing personal wealth and security. We can ignore racism or climate change. We can be Christian and operate out of fear that keeps us from welcoming the people suffering most in our world today. We can show our Christianity by simply popping into church on Sunday and giving a few donations at Christmas time. We can be Christians and champion war. We use the phrase, "he loved God and country," as if somehow the two were on the same level, and nationalism is part of following Jesus. We are a confused bunch of Christians.

Today's Gospel reads, "Jesus summoned the crowd with his disciples and said to them, 'Whoever wishes to come after me must deny [herself], take up [her] cross, and follow me. For whoever wishes to save [her] life will lose it, but whoever loses [her] life for my sake and the sake of that of the Gospel will save it.'"

Following Jesus requires commitment. His question to Peter rings down through the ages and exhorts us today. Who do you say that I am?

In the letter that Pope Francis wrote for the Year of Mercy, he begins, "Jesus Christ is the face of the Father's mercy." In his death, but also in his life, Jesus is the face of the Father's mercy. Until Jesus became human, people worshipped an unseen God. Then Jesus walked the earth — and talked and ate and slept and wept, and more. Isn't the Incarnation mind-blowing? In Jesus' words and actions, we actually see God at work.

The Gospels, then, are full of insight into who Jesus is — and as such, who God is. In recent liturgical readings, we saw Jesus healing a blind man. He takes the man away from the crowd, touches his eyes, and heals him. Time and time again, we see that Jesus is a healer. He cares for physical and spiritual needs alike. He is often moved with compassion and acts of deep concern.

In several consecutive Sunday Gospels this month, we have seen a Jesus who goes beyond the law. He knows and respects customs, but he challenges his audiences to go deeper. Although "an eye for an eye" was practice, Jesus encouraged people instead to offer nonviolent resistance. Although it would be permissible to hate one's enemy, he beseeched listeners to love everyone, even and maybe especially those who don't love us. In the same passage, Jesus tells people to give freely and never turn their back on someone who wants to borrow. There was no logic or fairness. The love he preached and lived was irrational.

Jesus' life embodied such radical love that he became a threat. He resisted the status quo. He crossed spoken and unspoken boundaries, spending time with those deemed unworthy or left out in society. Even the lepers knew that they could approach him and find acceptance. He urged people to rethink their prejudices; even a Samaritan could be a neighbor. He valued women and built equal friendships with them at a time when they were property. He sat at the table with all classes of people, even those who most disagreed with him. He rejected rigidity and scrupulosity in favor of wholeness.

First and foremost, Jesus was close to those who suffered, especially the poor and the oppressed. He empowered them, offering the Beatitudes, and he advocated vehemently for justice. The two times that Jesus most clearly mentions hell in the Gospels are in the context of what happens when we ignore the poor in our midst (Matthew 25:31-46 and Luke 16:19-31). And, perhaps most beautifully, he was loving through it all. Yes, Jesus spoke the truth and challenged. He was honest, clever, and authentic, but never hateful. He was a man of relationship, journeying with others at every step of the way and finding strength in intimate prayer with Abba.

So, who do we say that Jesus is?

It is the question of a lifetime, or perhaps eternity. But now, if ever, is the time for us to embrace it. Our responses will never completely encompass the inexhaustible mystery of Jesus. Still, we should seek the answer with our whole selves. This will transform our own lives, as we encounter his tender love, forgiveness, compassion, and companionship. And we, in turn, will transform society, carrying on the mission of love for which he lived, died and rose.

[Tracy Kemme is a Sister of Charity of Cincinnati. Author of the blog Diary of a Sister-in-Training, Tracy is excited about the future of religious life! She currently ministers at the Catholic Social Action Office in Cincinnati and as the Latino Ministry Coordinator at a local parish.]

Changing the balance of love

'What did you learn from the coronavirus pandemic?'

Lent is a time of listening