The summer of 2012, I gave God an ultimatum. I would train to run 26.2 miles and pray all along the way, and by the time I reached the finish line in November, God would answer the question on my heart: Was I being called to religious life?

It's humorous to me in hindsight, but at the time, I was desperate. I had spent the better part of two years going back and forth about a call to religious life, which to my 24-year-old self felt like an eternity. I had run several half-marathons and always hoped I could take it to the next level someday and run the full 26.2 miles. Long weekend runs would afford plenty of solitary time to think, so it seemed like the perfect solution to my discernment woes.

At the time, I had just started an internship with the White Violet Center for Eco-Justice, a ministry of the Sisters of Providence of St. Mary-of-the-Woods at the sisters' motherhouse. Early on, one of the sisters gave the interns a tour of the grounds and shared about the community's foundress, St. Mother Theodore Guerin.

As I got to know sisters at lunch on campus and in prayer groups, Mother Theodore kept showing up. Sisters would quote her from memory and share stories about her as if she were still alive. One of the sisters scrounged up a copy of Mother Theodore's biography for me, and I eagerly dove into it.

Simultaneously at the national level, many Catholics were reeling from the results of a doctrinal assessment of the Leadership Conference of Women Religious, which began in 2009. The summer I started my internship, the Vatican had issued mandates for reform as a result of the assessment and assigned a bishop to oversee "revision" of LCWR.

A broader process, called the apostolic visitation, had begun in 2008 and involved interviews of hundreds of sisters at motherhouses across the country to investigate their lives, ministries and experience of community. The reasons for the investigation were unclear, and the secrecy surrounding the unfolding of events was unsettling for many sisters I knew.

Seeing the life's work of women I admired called into question in this way left me angry. Although I was deeply moved by the sisters' contemplative and nonviolent responses to a process many found hurtful, watching these events unfold brought up real questions for me as a woman in the Catholic Church. Would such an investigation have taken place if those accused of being "radical feminists" or focusing on the wrong issues were men?

How could I be part of a church that would treat women this way, women who for decades have been in the trenches where others would refuse to go, who have built the education and social services infrastructure for waves of immigrants, who were asking the deeper questions others were afraid to ask? And of course, there was the bigger question of whether I would join the ranks of these women.

I pondered these feelings on long runs through the countryside, and as I iced my weary knees, I kept paging through Mother Theodore's biography. I learned she had struggled with Bishop Célestine Guynemer de la Hailandiére, the bishop of Vincennes, Indiana, who tried to elect a different general superior when Mother Theodore was out of town. He also once locked her in a closet for refusing to hand decisions over to him about who would enter the community.

What struck me most about the tension between Mother Theodore and the bishop, though, was the way she responded. Mother Theodore was genuinely concerned for Bishop de la Hailandiére's well-being and prayed for him often.

She spoke frankly and courageously about what she believed best for her young community, even when the bishop pressured her to violate the community's rule. Her contemplative spirit made itself known in nonviolent actions for the sake of truth. Her wit brought her through times that tested her patience. A French woman whose fearless leadership and business sense were not always seen as desirable by her American neighbors, she once quipped, " It embarrasses them a little to have women resist them and speak to them about the law."

One day soon after I read this piece of Mother Theodore's story, I was out on a run and pondering with some sense of urgency whether I could survive as a woman in a patriarchal church. The question pulsed through my heart as it beat, hit me with each impact of my shoe on the pavement.

I took a lap through the cemetery to draw on the sisters' wisdom and was nearing my mile goal for the day. My final stretch took me through the cemetery gates and down a sidewalk with Stations of the Cross statues on both sides. As an app on my phone told me I'd reached my goal, I slowed to a stop and bent over, breathing hard and holding the question, "How can I stay? How can I stay?" I straightened back up and glanced over my left shoulder only to realize I had stopped at the eighth station: Jesus meets the women.

"That's right," I thought. "Jesus modeled radical inclusion of women." The Gospel narratives where Jesus' presence to women would have been considered scandalous in his day started flashing through my mind: Jesus touching and healing women who were considered unclean, Jesus being seen alone at the well with a woman, Jesus appearing first to a woman after rising from the dead.

That day six years ago, Jesus met me on the path and reminded me of this truth. This is part of our legacy as Catholics. Since that day, I have not stopped wondering if women's leadership will ever be fully recognized in the Catholic Church. The questions remain.

Yet as I celebrate Mother Theodore's Oct. 3 feast day with my Sisters of Providence this week, I am grateful for a woman who showed up as her full, loving and prophetic self, knowing full well the dominant culture might punish her for it. I celebrate being part of a long line of "faithful dissenters," from the prophets to Jesus to women like Mother Theodore who have broken boundaries and created hope through the ages. May it continue to be so.

[Tracey Horan is a member of the Sisters of Providence of St. Mary-of-the-Woods, Indiana. Her first deep conversation with this community occurred in a melon patch during her time as an intern at the Sisters' White Violet Center for Eco-Justice. She is a community organizer with Faith in Indiana (formerly IndyCAN).] 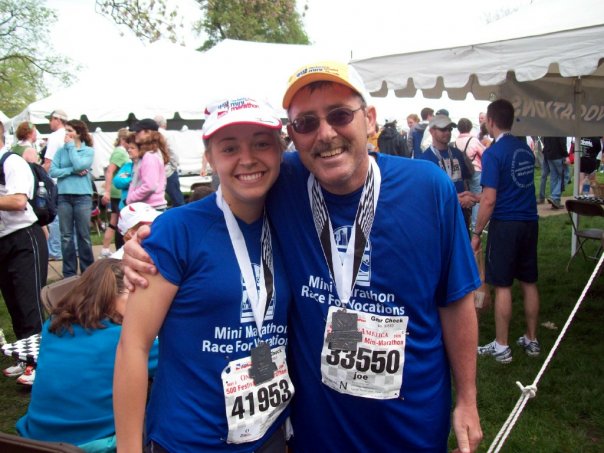 Image
Sister Tracey and her Dad at the finish line of a half-marathon.jpg