Hold onto hope and onto each other 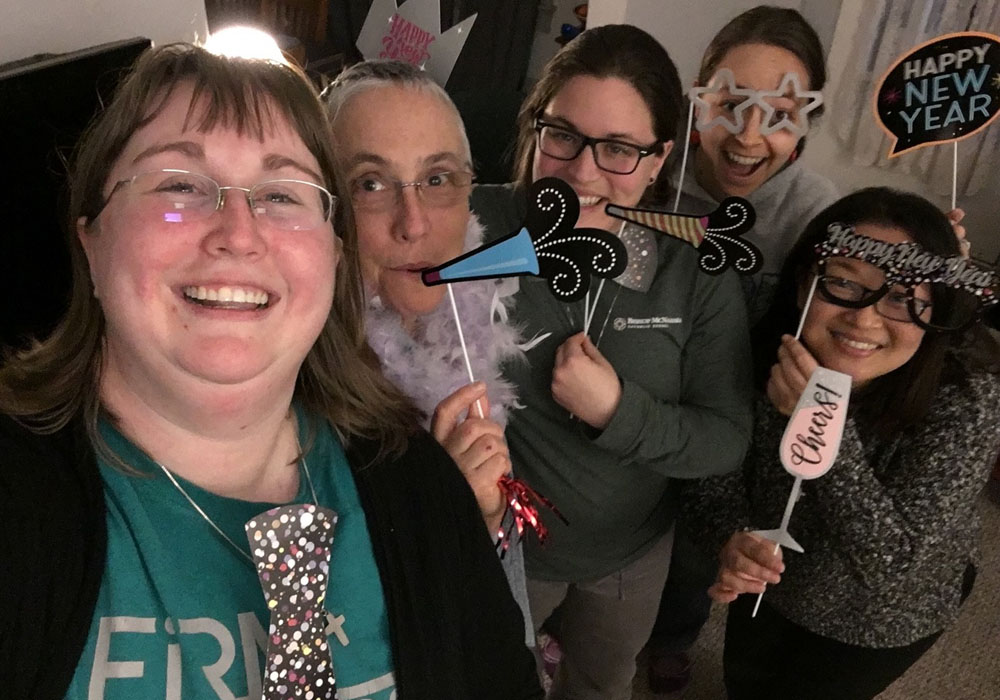 On Dec. 31, 2018, I joined a few of my Sisters of Providence for what has become an annual ritual among some women in initial formation in our religious community: welcoming the new year together. For the past six years, apart from one New Year's Eve family wedding, I have welcomed the new year in some fashion at our motherhouse in Saint Mary-of-the-Woods, Indiana.

The location and cast of characters have varied. One year involved impressive hats and an ad hoc noisemaker band in one of our residential buildings on campus. Another year we orchestrated our own music videos and played the world's longest game of Uno. Often we reflect on gifts and challenges of the year, as well as our hopes or predictions for the year ahead. Food and laughter always abound. There is something beautiful about welcoming in the new year with the women co-creating a new spirit with me as we discern and grow in our Providence charism together.

This year we shared a special prayer before the food and games began. The theme of the prayer was hope. We heard proclaimed these words from our very own Providence Sister Marie McCarthy.

Looking back, 2018 was a tough year to be hopeful. Several immigrant leaders I have walked with through my ministry at Faith in Indiana were detained or deported. We shook with grief and anger as the federal administration separated thousands of families seeking asylum at our southern border. The midterm elections in Indiana saw an inundation of campaign ads weaponizing fear to scapegoat our immigrant neighbors and instill further division.

Hope in these circumstances has felt like a truly prophetic act. So as we continued reading Sister Marie's words, they seemed to express what has been so hard and so beautiful about this year:

"As women of Providence, we are called to be a prophetic presence, to consider no person or situation hopeless. … A fundamental dimension of prophecy is announcing hope. Each of us is a messenger of hope as we speak words of encouragement, healing, forgiveness and possibility."

During the prayer, we took a few minutes of silence to reflect on the questions:

What are the contours of hope now for you? Is hope even worth it? Does it matter?

The words jumped out at me: Is hope even worth it? Does it matter?

I tilted my head back and closed my eyes, searching desperately for where hope had been amidst the pain in 2018. Hope was hard this year. It took persistent effort and conscious decision. Yet, as a community organizer, I realize I have been trained to hope: to look for possibilities; to affirm the gifts I see in leaders; to see failures as learning opportunities; to imagine what shifts would make something seemingly impossible finally possible.

Immediately an image came to me: the face of my friend Horacio. Over the past two years, Horacio has been a leader in our work for racial and economic justice. He was detained early in 2018 when he approached his car to go to work one morning. I remember nearly falling to my knees with the blow when I walked out of a meeting that day, checked my voicemail and heard the news. One of the kindest people I've met, Horacio had chosen not to risk returning home to Mexico for his grandmother's funeral just a couple weeks before. And now he might be deported anyway.

Throughout the year, Horacio and I had a number of conversations as he discerned what path to take and how to cope at various stages of his imprisonment and court hearings. There were moments when he was overwhelmed by fear and the dangers that might await him if deported to Mexico. When I visited him in detention in Brazil, Indiana, he was so disoriented from the conditions that he would ask what time it was or what the weather was like outside.

At times, he wanted to give up — he was tired of the physical, emotional and financial toll of fighting to prove he belonged in the community where he had lived for decades. And there were moments of renewed hope when he was finally released, and when a legal path seemed to open up. At moments when no organizing could be done to address the pain he was going through, all that was left for me to do was listen, prayerfully affirm his courage, and remind him that he was not alone.

A few days before my New Year's Eve celebration with the sisters, I sat across the table from Horacio as we reflected on all this — on all that was 2018. He looked at me and said, "Tenías razón — vale la pena luchar." (You were right — it's worth it to fight.) After all he'd been through, Horacio was now seeking asylum and may even be eligible for a driver's license and job permit. There was hope in his eyes. Not a hope that came from untested optimism, but a prophetic hope tried by imprisonment, fearful waiting and the temptation to give up.

Horacio in that moment was a messenger to me who announced that hope is worth it – vale la pena.

These dreary January days, in the midst of an unprecedented U.S. government shutdown inspired by xenophobia and exclusion, I cling to Horacio's words as The Holy One's assurance that something else — a different reality — is possible. As the odds are often stacked against those working to build justice on earth, there is no guarantee, as Sister Marie said, of the kind of difference our hope will make.

It seems that hope becomes prophetic precisely in these moments: precisely when our choice to believe in what's possible, with the encouragement of compañeras and compañeros like Horacio, has no guarantees.

So in a culture that lives for measurable results, what can sustain our belief that no person or situation is hopeless, if not the guarantee of a positive outcome? How can we keep momentum on a path that appears impossibly bleak and foggy?

My own words to Horacio express the answer I've found to these questions: You are not alone. Prophetic hope is only possible in community — when we are able to remind one another of God's faithfulness through the ages and in our own journeys. When we can take turns holding onto hope when one or another of us loses our grip on it. What was impossible alone becomes possible in community.

In this way, it only made sense to ring in the new year with some of the very women who hold hope with me. Here's to a new year of clinging to one another, clinging to prophetic hope.

[Tracey Horan is a member of the Sisters of Providence of St. Mary-of-the-Woods, Indiana. Her first deep conversation with this community occurred in a melon patch during her time as an intern at the Sisters' White Violet Center for Eco-Justice. She is a community organizer with Faith in Indiana (formerly IndyCAN).]

Spirituality | Hold onto hope and onto each other

The role of dance in African culture

I feel distant from God. How can I close the gap?