From the pews in the back 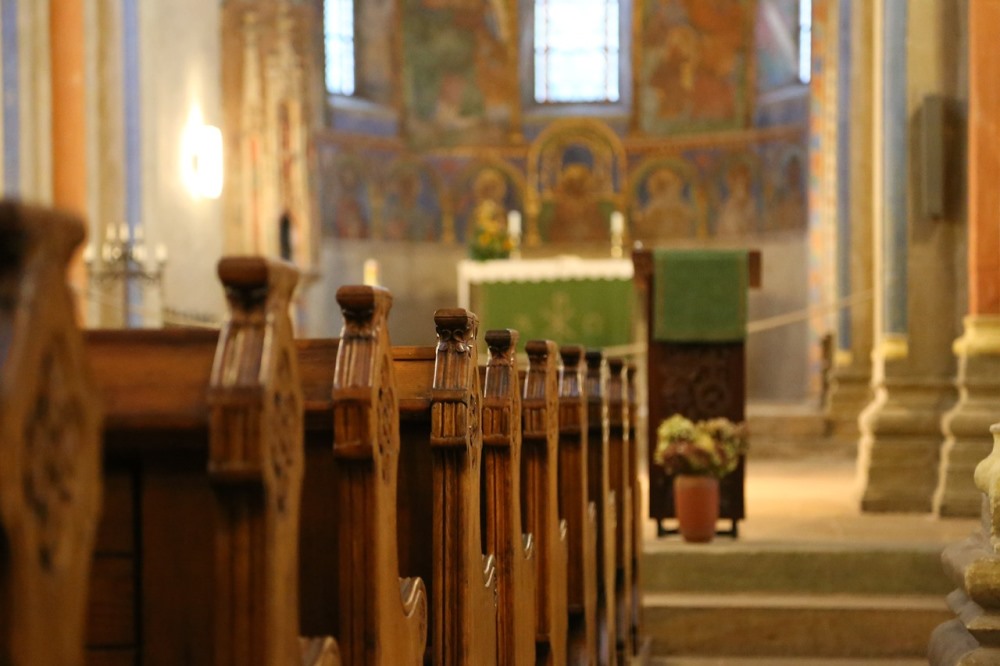 Twice last weekend, I found myself somewhere I haven't been in a long time: the back pew of church.

Any cheeky pastor or regular Massgoer will tell you, with a note of sarcasm in his or her voice, that the pews in the back are where the "real" Catholics sit. The further back, the better. There, behind dozens of heads, there's little chance of being singled out. You can come and go as you please, sneaking in late or leaving early. And there's no need to worry about who might be watching you because, for the most part, everyone is ahead of you.

Sitting in the back pew, though, I realized something different. There, in the back of the church, I had a different perspective. I could see things from a place I hadn't for a long time, and suddenly, I understood the call to stand on the margins in a new way.

Sure, I could go to the border, stand at a rally, or serve in a shelter. In fact, I had spent the week before with a group of students on an alternative spring break trip doing service in Appalachia, but for a moment, in that back pew, my understanding of the margins took on another dimension.

I watched the families in front of me as parents wrangled their children with all the love and affection you can muster when a 4-year-old can't sit still. I took in a view of the whole church — couples, singles, families, young, old — as the community moved together, joined in worship. As the pastor pulled out a step stool and trash can to illustrate a point in his homily, I watched as the collective heads of the congregation stretched to see what was going on and as little children poked their heads out into the aisle to get a better view.

What I had thought would be distracting (not having a clear view) in fact put me more in touch with the people around me. As I listened to the Word of God, the people around me illustrated it. There, on the ordinary margins of the church, was a gift I wasn't expecting: the People and Spirit of God in my midst.

There was a closeness to the space in the back. People packed into these rows. What I had anticipated would be a solitary seat soon became a communal experience, and even if not everyone around me was singing or saying the prayers, there was a palpable presence to our being together. At the sign of peace, a whole group of people who'd come to Mass alone greeted one another, happy to have friendly faces in the same section.

Taking this all in, I realized the only thing truly standing between my neighbor and me was the border of my own being. And yet, on the margins, that being is exactly what unites us.

It is our brokenness, our blessed and broken being that draws us together in communion and community. Sitting in the pews in the back, that became abundantly clear.

I observed as eucharistic ministers were directed back to the woman with a walker so she wouldn't have to make the long walk to the front of the church and could still have easy access to the facilities she needed in the back. I listened as ushers welcomed and directed people long after the opening hymn.

Further up in the sanctuary, there were places implicitly saved for people by virtue of regularity, but the pews in the back didn't have reserved seats. Everyone could have a place.

The challenge, though, is bridging the gap between these places, connecting the center and the margins for the betterment of all. Placing ourselves on the margins isn't as easy as sitting in the back pews. It requires more than an hour a week. It means shifting our perspective completely — altering our life stance, questioning our convictions, and living in a place that is more often than not uncomfortable.

To know and embrace such a shift to the margins is to become marginalized. It means not just offering sympathy to others, but inhabiting the margins through genuine empathy, an empathy that ultimately yields solidarity. This is what Christ did. Not because it was trendy or expected, but because it was what love and his faith called forth in him. Loving unreservedly placed him on the margins, drawing him into relationship with multitudes of people who were broken, battered and bruised in ways both visible and invisible.

Centuries later, this is where we meet Christ in our midst: in our own brokenness and the brokenness of the world. The People of God and the Spirit of God unite in this space, and it is our response to the call to love that brings us into relationships with both. Actively answering that call inevitably places us on the margins and in the back pews.

That is where we will come to know God. Making our home on the margins may not feel safe or comfortable, but it is there that God waits for us to love as Jesus did. There, on the margins, God is able to work within us, through us, and around us, transforming what we think we know into what we will never forget, offering us a new perspective and inviting us to see with new eyes, to reconsider where we are called to see from and to choose to stretch the margins of our being so that all may be one.

[Colleen Gibson is a Sister of St. Joseph of Philadelphia. Author of the blog Wandering in Wonder, she currently serves as assistant director of campus ministry at Chestnut Hill College in Philadelphia.]

Spirituality | From the pews in the back

Spirituality with the sisters: Four movements of prayer

The blessing of regrets

The Life: mentors and moments that moved sisters forward

A long and encouraging day