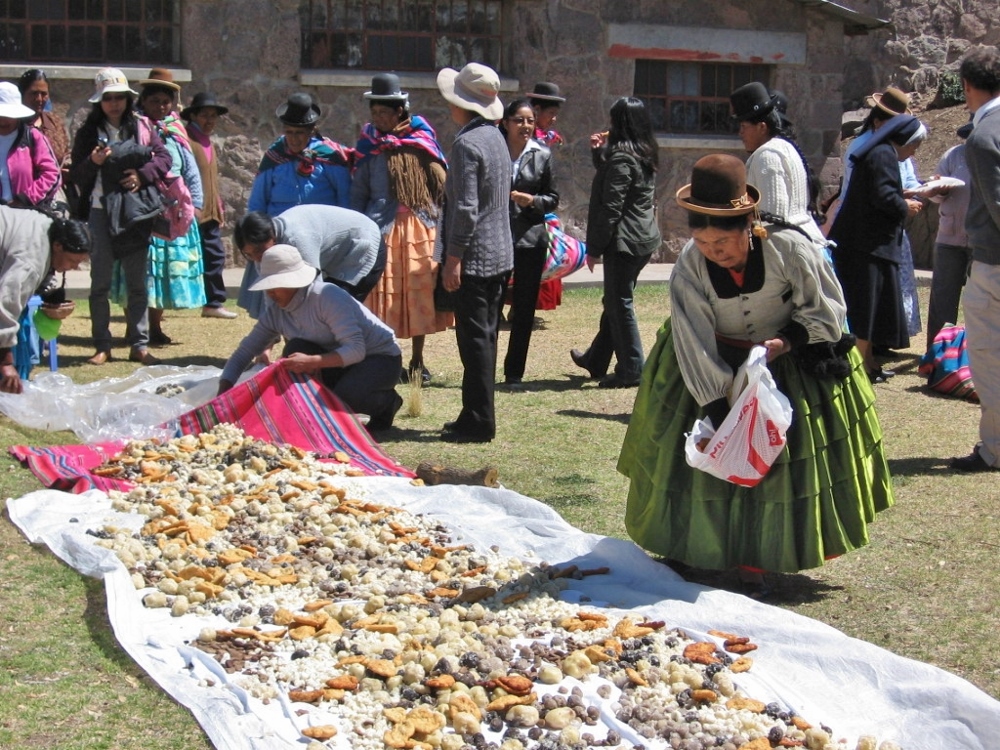 Women prepare “fiambre,” a traditional feast of potatoes, beans, meat and bread cooked by the community and shared picnic style on the ground. (Joan Brown)

A month after returning from Peru, the beautiful brown faces of the Aymara people, the colorful dress of the women who still shepherd their flocks in the high Andean mountains and many colors, sounds and images pour through me in quiet moments. But, there are also other images and stories of challenges, sadness and transformations that cling to my feet as I walk the dusty days back in New Mexico.

Some people have bucket lists. I do not. Peru was not on any list; however, I live with Marlene Perrotte, a Mercy Sister who ministered in the in the Prelature of Juli, Alta Plano of Peru for some eight years among the indigenous Aymara People. She responded to a call from Maryknoll for volunteer sisters to join in their work of leadership development in communities in the 1980s. The Mercy Sisters of Burlingame, California, began ministering in the Prelature of Juli especially in the area of Acora, Chicuito, Mocachi and Puno on the shores of Lake Titicaca at an altitude of about 12,500 feet in 1964. As part of the 50 years of Mercy presence in Peru, those who ministered among the people and were part of the history of Mercy in Peru were invited to celebrate at the beginning mission in Acora in the Alti Plano.

I was invited to attend this celebration and see where the Mercy Sisters and other women religious communities and Maryknoll Sisters and Brothers worked since the call of Pope Saint John XXIII 50 years ago. In addition, the U.N. Climate Conference was being held in Lima, and Peru is one of the countries most affected by climate change and increasingly threatened by extractive industry use and pollution of decreasing glacier waters. I was curious about the effect 50 years of religious presence in a locale might have; and, opportunities to learn about environmental issues and climate change with the accompanying piece for solidarity work is my passionate work. So in December I put ordinary life on hold and packed my bag for Peru.

Mercy and Maryknoll presence in Peru

The 50th anniversary celebration that gathered some 39 Sisters of Mercy from various parts of Peru, the United States and institutes in Ireland, Canada and New Zealand was also a celebration for the Aymara people living around Acora and Puno. Days of visiting, a Mass and feast also celebrated Aymara Sr. Carmen Rosa, who has been a Mercy sister for 25 years, and the final vows of Sr. Biviana. Traditional dance and conversation blessed everyone in the form of incense, prayers, Aymara songs, “brindis” (a traditional toast that begins by offering the first sip to Mother Earth) and “fiambre” (a traditional feast of potatoes, beans, meat and bread spread upon cloth on the ground). It was evident that gathering grew out of years of a post-Vatican II presence. This was a church of equals where sisters lived and walked side by side indigenous people celebrating their sacred customs and wisdom as they grew in leadership abilities. 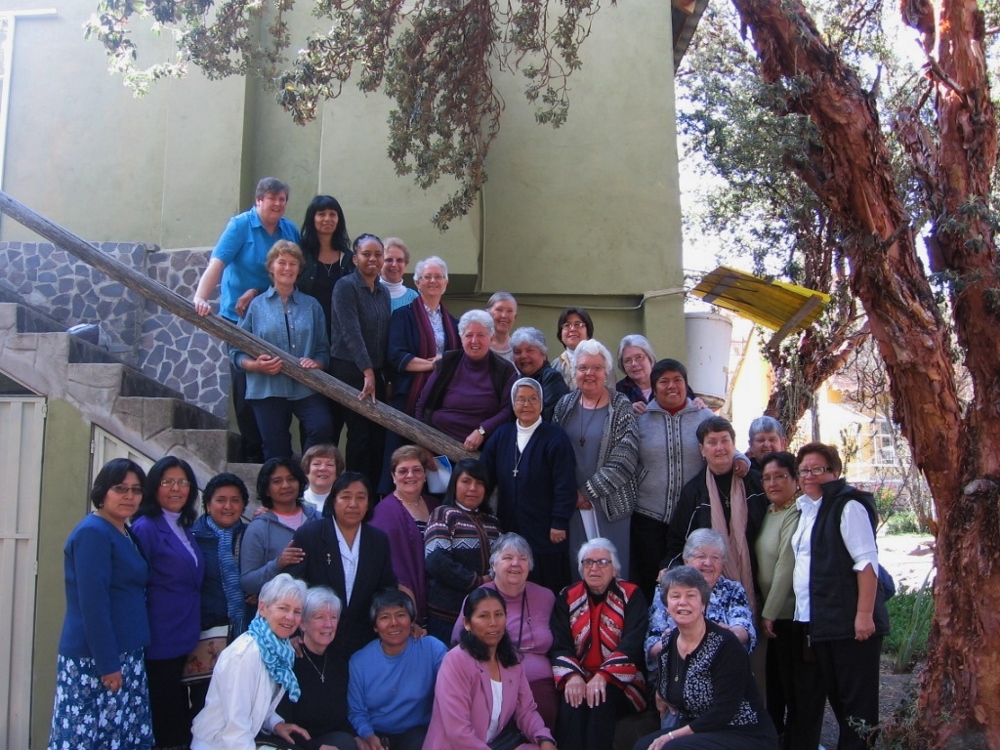 Mercy Sisters and Associates from the United States, Peru and Bolivia gathered for the 50th anniversary celebration. (Joan Brown)

Many lay leaders still offer guidance, prayers and ancient, traditional Aymara Earth-centered blessings to and for their communities. Such leadership and sacred actions continue despite an Opus Dei-led church that does not understand or even welcome their gifts. Story after story sprang from the lips of these wise Aymara men and women of how they have been diminished, refused sacraments and ostracized in recent years by the very church that empowered them as indigenous communities during the first 30 years after the Second Vatican Council.

One Aymara woman shared how she was let go from a diocesan job after nearly 30 years – just short of retirement – leaving her financially vulnerable. Santiago, a professor of Aymara studies and history working in an internationally renowned institute of the Catholic Prelature for decades was terminated, as was his project. He now works with a non-profit outside the local church. And yet another professional Aymara lawyer, Cristobal, who worked in a human rights office, was informed when a new Opus Dei Bishop arrived that human rights and justice were not the work of the church. The office was severed from the diocese. Now the work, infused with Gospel values and dedication, continues as a public non-profit fighting for human rights and the rights of the indigenous people to protect land and water in light of Goliath forces from mining and oil and gas industries.

Amazingly, the people remain faithful to the deep values of the Gospel of justice and pass this along to others. They have come to know through the presence of the Mercy, Maryknoll and other religious communities that they have rights, dignity and equality.

It would seem that the church has many opportunities for growth and ministry within the realities of environmental degradation from mining, drought, concerns for water and the future of food security and the exodus of young people to the mines as the only means of survival in the Alti Plano. Lake Titicaca is polluted from human waste and a variety of mining interests; drought and dryness are the new normal with climate change; and rural traditions of herding farming and weaving are left to the old women and men as they young head to the cities, abandoning well-honored traditions  and culture, leaving lonely elders in the wake of exodus.

Mercy and Maryknoll Sisters over the past 50 years seem to continually venture into challenging ministries such as human rights, women’s rights, fighting exploitive practices of mining companies, learning and educating others about conservation of water, educating about climate change and faith. From talking with the sisters and lay people I visited in Peru, the institutional church, for the most part is not able to relate these realities to the Gospel. The current church seems to reject Vatican Council II and appears mostly uninterested and unengaged.

As I reflect upon my short yet intense time in Peru, the presence of religious communities after Vatican II is evident in the continued work of the people in and with their communities. The native Peruvian sisters who have joined the work of justice and peace within the context of faith and Mercy are forging their own path, delicate though it is, with U.S. sisters few in numbers and a church context that is, for the most part, no longer Vatican II in spirit or action. The women seem invested in caring for the environment and water, and dealing with mining, within a faith context. What will community in the future look like? It is evolving. Some of the sisters spoke of a desire for intercommunity living and working. Living and working alongside associate members and the broader community is another facet of what may evolve.

I am reminded of the Parable of the Sower and the Seed (Mk 4:9) as I remember the people, the sisters and the small plots of land growing grain and potatoes on the mountainsides of Peru: “Other seeds fell into the good soil, and as they grew up and increased, they yielded a crop and produced thirty, sixty and a hundredfold. And Jesus was saying, ‘He/She who has ears to hear, let her/him hear.’”

The people of the high mountains and other areas where the Mercy, Maryknoll and other communities worked together with the people to plant seeds continue to plant and grow food for the Sacred Earth Community, even amidst the rocky soil of the church. 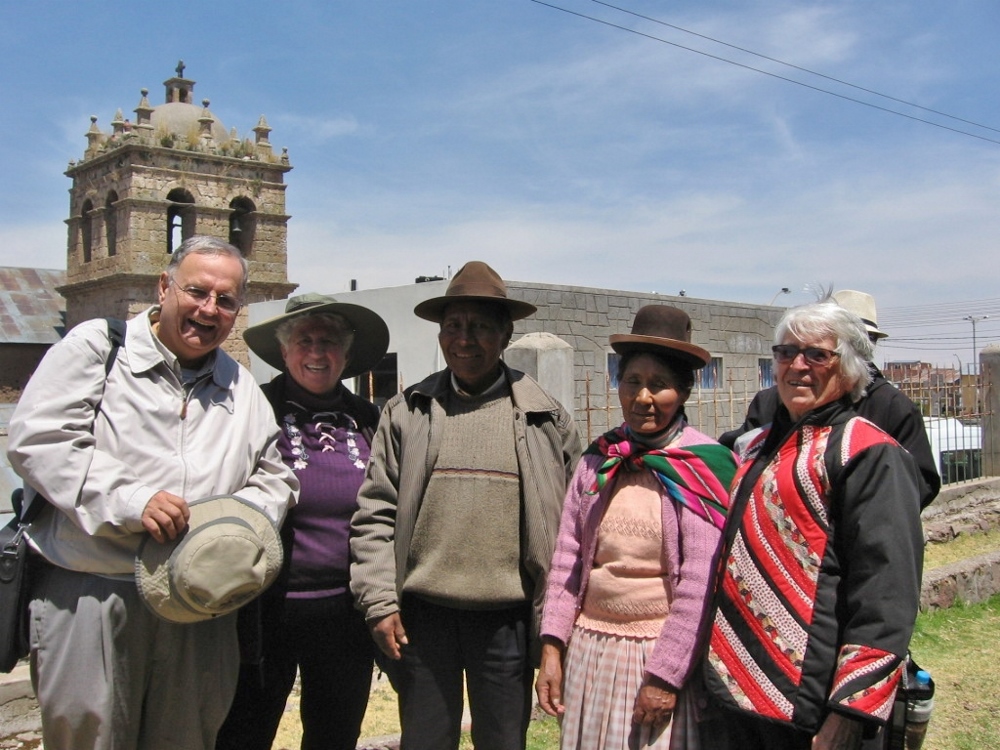 Burning down our common home