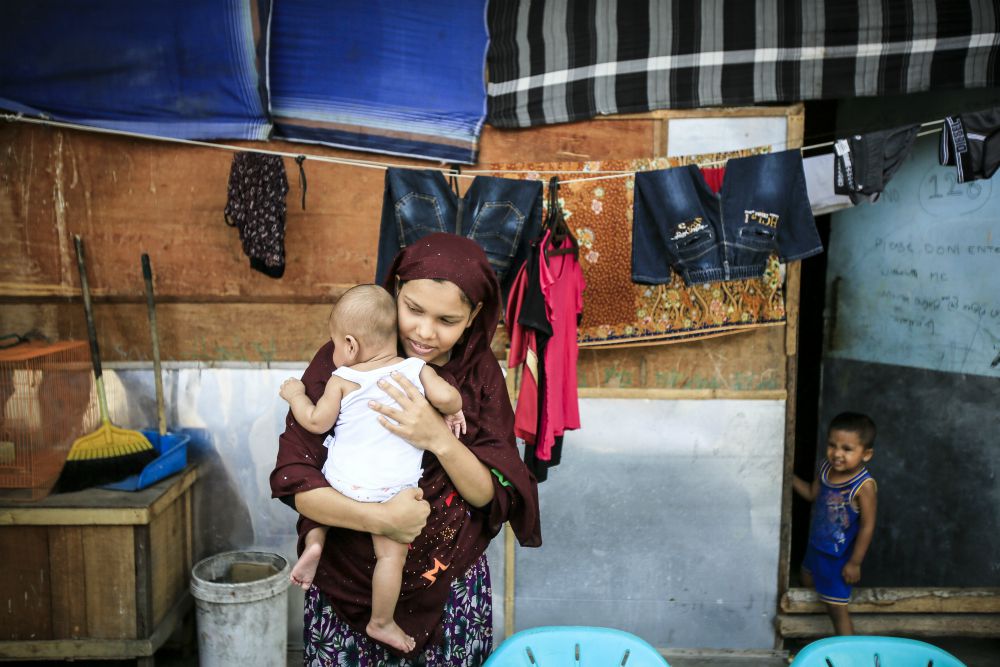 A Rohingya woman holds her 2-month-old baby in early February at a refugee shelter in Medan, Indonesia. The woman and her husband fled persecution in their village in Myanmar and have been waiting for two years to be resettled to Malaysia or Australia. (CNS photo / Dedi Sinuhaji, EPA)

Malaysia is the destination country of thousands of migrant persons known as Rohingya, an ethnic group long settled but denied citizenship in their birth country of Myanmar. The Rohingya ethnicity implies Muslim religious identification, making them a double minority in Myanmar. This column reflects the experiences of our Good Shepherd Sisters' shelters in Malaysia, giving a small glimpse of the vast perils and occasional small victories of the human spirit told through stories.

Due to the sensitive nature of this information, both political and personal, the agency name and personal names are not used — an indication of how human dignity, even one's name, is denied to the stateless.

Ameera is a 42-year-old Rohingya asylum seeker who was widowed in Myanmar. A lone traveler leaving Myanmar would endure a long journey by sea and jungle trek, coping with smugglers and traffickers who typically ask for additional money and — for women and girls — sexual submission. Once in Malaysia, Ameera married a fellow refugee who quickly became abusive. She fled to the shelter with a 15- month-old son. Recuperating in the safe environment, she felt she could return to the Rohingya community and become independent. Rohingya are typically denied work permits and have no secure housing, but Ameera succeeded in finding a place to live and a hidden job in the informal sector. Within six months she was back at the shelter — this time without her son.

Ameera's neighbors seem to have told her husband where she was, since tradition requires that women must be loyal to a husband and cannot live without a man. The husband continued to beat and rape her. When Ameera fled again, she could not take her son: the father possessed all the rights. Ameera could not report the abuse since the police had previously harassed her. The staff of the shelter say Ameera's story is the norm, a "systemic bullying" of the stateless.

As a stateless woman, all but invisible, Ameera possessed no nationality, no rights, no protection and, now, no child. As an asylum seeker she is registered with the United Nations High Commissioner for Refugees (UNHCR), which gives her a refugee identity card. However, Malaysia is not a signatory to the international conventions on statelessness or migrants, so she has no pathway to stability ("regularization"). Malaysia simply does not grant citizenship to Rohingya or to their children born in Malaysia. So the sad ending to this story is that eventually Ameera returned to her husband, for the sake of her child. She keeps in contact with shelter staff for practical help such as renewing her UNHCR card, and she goes on enduring abuse.

A stateless person, by definition, does not have a nationality. A stateless person belongs nowhere, to no one and is barely regarded as human in relation to basic social protections or rights that ought to be universal. The help offered by the shelter can be meager but it provides a place where any person can experience human dignity — the worth of being listened to and offered a response to expressed needs.

Despite the hazards of migration, Saniyi (13 when she migrated) exhibits the unrelenting hope of so many migrants. Saniyi lived in chronic poverty in Myanmar, a stateless child of a stateless single mother. She had heard stories of girls in Malaysia who sent money to their family, so when a relative asked if she wanted to become a babysitter in Malaysia, she said "yes." Captured by traffickers, she was confined in a Malaysian trafficking agent's residence where she was constantly harassed by one man.

Gradually Saniyi, still only 13, understood that she was being marked for marriage. She was forced to sell tissue packets on the street with a daily quota required to avoid a beating, but she was arrested with a group of street children for illegal selling. Because of her age, Saniyi was referred to the shelter for protection. The shelter, together with UNHCR, began advocacy for resettlement to a third country, since as a Rohingya she would remain stateless forever in Malaysia. After a year, she passed the settlement process and is now living in the United States, with an agency overseeing her development and protection. She escaped trafficking and avoided becoming a child bride. She will eventually be able to gain citizenship in her newfound country. One might even call her lucky.

Despite support of a good shelter, the assistance of UNHCR, international migrant conventions, and a convention on child rights, a migrant child can easily lose her entire family. Shelter staff are obliged to confront the fact that a Rohingya child might be better off alone in a strange resettlement country than holding on to family bonds closer to home.

Bibi was a 47-year-old Rohingya mother hosted by the shelter. Before that, Bibi had sold flowers on the street, living in one room with no furniture but thin mats for sleeping on the floor. Her four children, not allowed to attend state schools, were in a refugee learning center. Occasionally, when money was scarce, the children missed "school" to help sell flowers. One night police, having seen the children on the streets, barged into their home and arrested Bibi and the children for trafficking. Despite insufficient evidence for a court case, the family was held by police for over a month, moving between police stations, awaiting verification of their refugee status, and waiting to be placed in immigration detention.

Finally they were referred to the shelter, which supported their eventual return to their home. The family has endured trauma, and the children have become fearful of going to school or letting their mother leave the apartment. But over the months, the shelter staff continues to visit and help with groceries, and they see progress: Bibi is selling again and the young children have returned to school. Day by day improvement seems enough for now, but their future is uncertain.

The shelter staff describes some positive signs: The government plans to issue 300 work permits to registered Rohingya; there is a lessening of harassment; and more NGOs are providing services. Still, the staff understands that as long as the state does not officially recognize refugees, the journey towards an equitable and just treatment of refugees remains distant. The shelter, while doing direct service, is part of a local coalition advocating the ratification of international conventions; and they help internationally in support of the current United Nations consultations and conferences working toward global compacts on migrants and refugees.

Accompanying stateless persons is a long road with no end in sight. Regarding the shelter ministry, the director says: "For as long as the refugees remain marginalized in this country we will continue to provide the service." Just as I was submitting this column, the shelter director told me that a Rohingya girl scheduled for resettlement in the U.S. last year (but deferred due to the imposed travel bans) has been confirmed for a travel date of July 26 — a small victory that gives hope to all.

[Sr. Clare Nolan recently retired as training coordinator of the Good Shepherd International Justice Office. Good Shepherd is an international woman's religious congregation that is involved in providing social services in about 70 counties, with a particular focus on women and girls in vulnerable situations.]

Sisters head to Honduras to learn about causes of migration