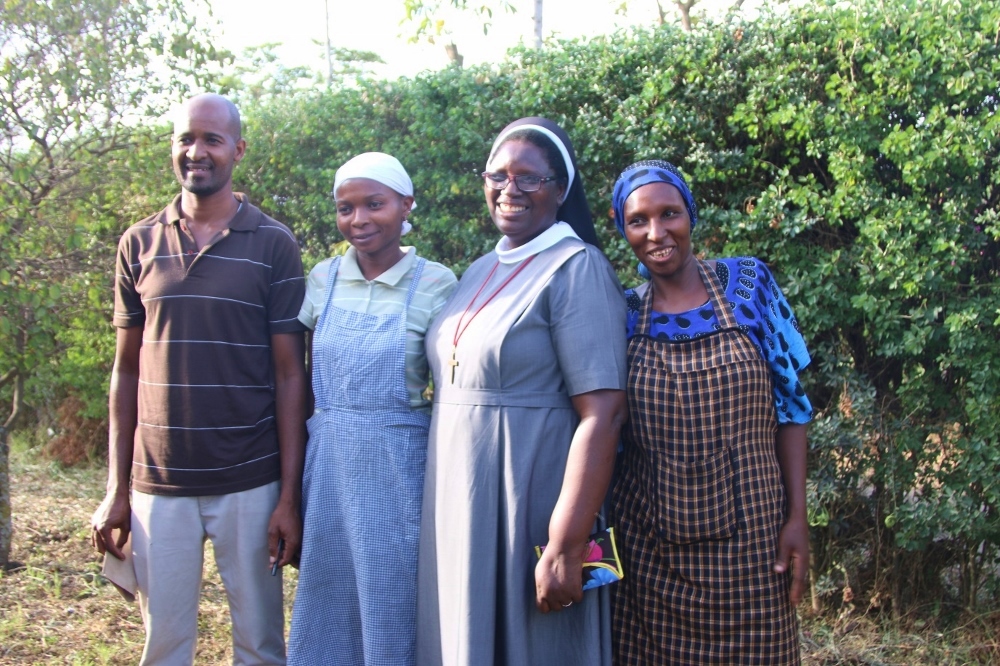 Kenyan Sr. Mary Paul Wamatu, second from right, is the first African woman to be elected to international congregational leadership in her community, the Missionary Sisters of the Precious Blood. She is pictured with one of the groups of borrowing members of Microfinancing Partners in Africa. (Provided photo)

Recently I had the opportunity to travel to Kenya and Tanzania as part of a team from Microfinancing Partners in Africa (MPA) because I serve on its advisory board. Microfinancing Partners in Africa was started by Sr. Toni Temporiti, a Sister of the Most Precious Blood, to provide some funding for microfinancing programs in several African countries. Now the non-profit organization is working with African sisters to start new projects. The model is typical, as the organization provides small amounts of capital funding, from a few hundred dollars to a thousand, that gets multiplied over and over through the dedication and commitment of sisters and the members of each group. The motto of MPA is "From poverty to possibility," and that was very evident in the stories members shared with us during our trip.

Our guide was Kenyan Sr. Mary Paul Wamatu, the first African woman to be elected to international congregational leadership in her community, the Missionary Sisters of the Precious Blood. From the moment she heard about MPA, Sister Mary Paul immediately saw the value of microfinancing. In addition to her own ministry in the Democratic Republic of the Congo, she agreed to facilitate the development of microfinancing projects in missions in other places where her community ministers.

As we visited a number of these projects, we met with the sisters and group members to listen to their hopes and dreams and celebrate their accomplishments. Sister Toni explained that MPA was able to offer some funding to their groups thanks to some generous people in the United States. Each group submits a written financial accountability report twice a year, develops a constitution or set of guidelines, and elects a slate of leaders. To increase the basic fund, members contribute the equivalent of US$2-5 to join, and each month add from $0.67- $5 to the fund

Microfinancing is not a one-size-fits-all concept. Sometimes, as in some of our projects in Kenya, the borrowers were originally street beggars. At other times the borrowers do have jobs but do not make enough money to apply for a loan through traditional banks to make home improvements or afford good schools or higher education, for example. 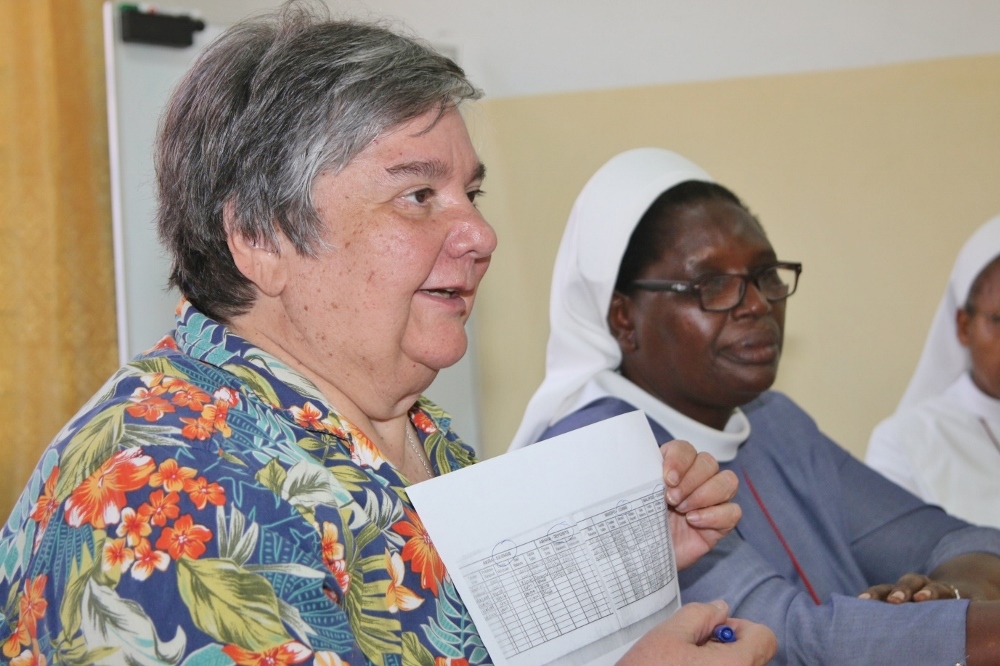 Microfinancing Partners in Africa was started by Sr. Toni Temporiti, a Sister of the Most Precious Blood. She is pictured at left explaining the reporting process to some borrower members, while Sr. Mary Paul Wamatu translates. (Provided photo)

In each of the following examples of microfinancing, Missionary Sisters of the Precious Blood facilitate the formation of the groups and offer ongoing guidance, support and encouragement. They also hold the money for the group, because group members trust them.

Our first visit was to a school this community of sisters founded for street children in Nairobi, Kenya. These children have either been orphaned or kept home from school to help support their families by begging in the streets. This school is free and the sisters and staff work with parents to help them understand the importance of education and how beneficial it will be to their families in the future.

Here the teachers and support staff organized their own microfinancing group and created their own fund. Members can ask to borrow money from their collective savings. Loans are given at monthly meetings, based on need. Group members have a keen sense of responsibility to one another and also work collaboratively on a project selling cooking gas to increase the fund further.

Our next stop was in Maji ya Chai, Tanzania, where the Missionary Sisters of the Precious Blood have a home for people with Hansen's disease (leprosy) and their children. To help finance the home and provide school fees for uniforms and food, the sisters and staff sew school uniforms, knit sweaters and make handicrafts to sell. The workers have formed a microfinancing group called Inuka ("Stand Up"). They hope to plant a garden, but when we visited were waiting for the rains. In addition to that group project, individual members shared the projects they want to start. Most wanted a small loan to raise chickens, pigs or rabbits to help their families. One man said, "If I just had two rabbits, that would change my life." The cost of two rabbits is $6 — two days' pay for him.

In Polisingisi, Tanzania, the sisters have two schools, and members of the microfinance group there include teachers, gardeners, cooks, farmers and drivers, among others. Collectively they bought airtime for cell phones and sold it to members to increase their savings. They also decided to start a separate account, and contribute about $0.44 per month to create an emergency fund for members. Members here borrow money to start their own projects. For example: Mary bought a goat and proudly announced to us that her goat is pregnant. Regina used her loan to buy material for sewing. Lucas started keeping chickens. Raymond's sister had died, leaving two orphaned children, so he used his loan to pay their school fees and buy water to sell from his home. 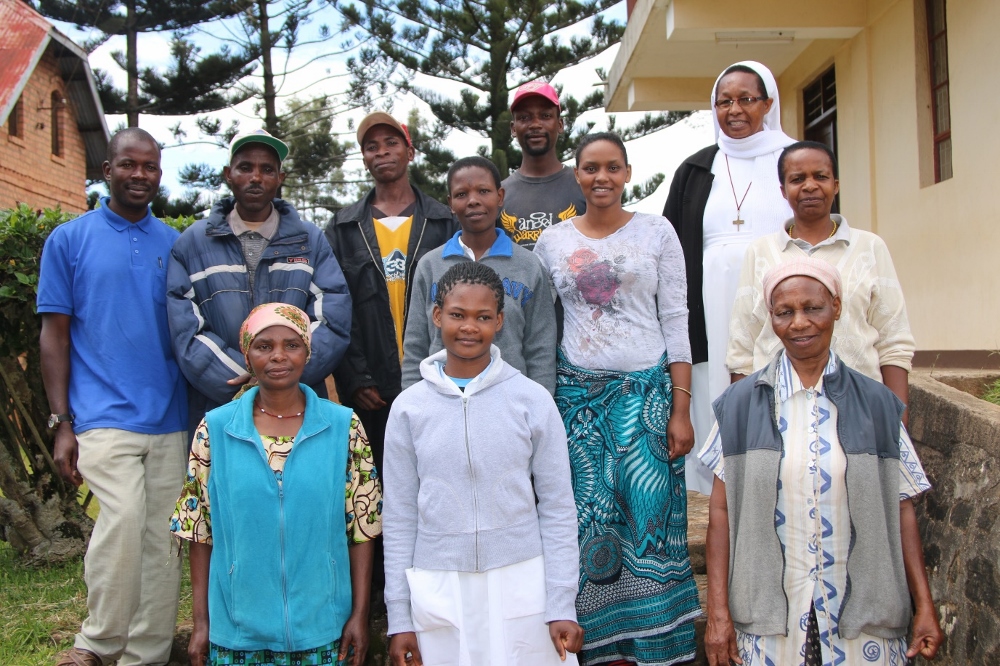 Sister Octavia poses with a group of borrowers she mentors in Kifungilo, Tanzania. (Provided photo)

We met with a small microfinancing group of five women from Kibungo Chini, Tanzania, who call themselves the "Mamas of Kibungo Chini." These women live in a very remote, drought-stricken area. They have committed themselves to meeting monthly, with one member having to walk several miles through the jungle to attend. Together they sell soap and vegetables (when available) and put the money in a common fund from which they can borrow to start their own small businesses such as broom-making and rug-making. Members discussed with us how this group has helped them to learn the importance of saving and given them the opportunity to take charge of their own futures. One member, Selena, told us that, "This group is my own garden."

In Zanzibar, Tanzania, we visited a microfinancing group whose members raise pigs. Each individual has one or more pigs and keeps them on a plot of land where members have built sheds for them. A slaughterhouse that meets country standards for selling the meat to hotels and other markets is under construction. Members take out loans to buy pigs, but they also care for the pigs of others at their "piggery." Each stall was spotless, and members were extremely proud of what they had accomplished together.

This is just a small sampling of the groups visited. Literally thousands of lives are being transformed through these microfinancing projects. Without Sister Mary Paul and the Missionaries Sisters of the Precious Blood on the ground, and the work of Sister Toni and MPA in the States, these groups would not prosper.

It does not take millions of dollars to lift people out of poverty. It requires only that we recognize the dignity of each person and affirm that dignity with a hand-up, not a hand-out. Partnership is key. Each time I return from Africa, I know my life has been enriched through the sharing that has taken place. Throughout our travels I could not help but think of what an incredible network we have throughout the world as religious women. All along our journey we stayed with the Missionaries Sisters of the Precious Blood, and in each place we were welcomed with drumming and singing and made to feel right at home. This truly is one of the greatest gifts of religious life — to be at home in the world.

[Caroljean Willie is a Sister of Charity of Cincinnati who has a Ph.D. in Multicultural Education. She has extensive experience working cross-culturally throughout the United States, the Caribbean and Latin America.]

Ministry | 'From poverty to possibility,' sisters' microfinancing projects in Africa

This moment calls for a new consciousness: becoming an anti-racist